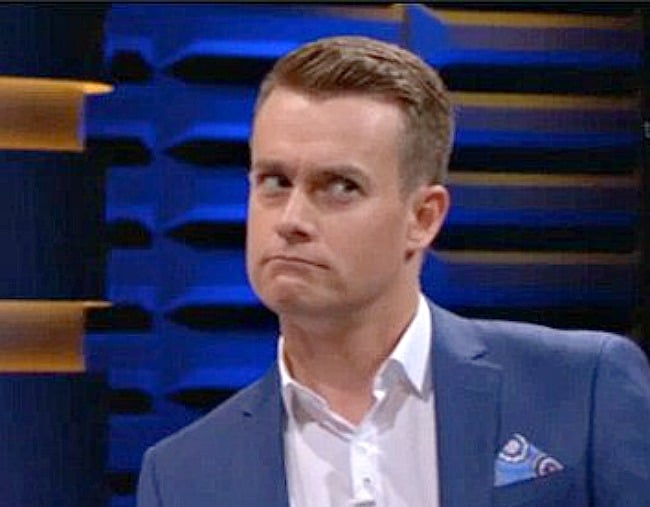 Things are looking up for Grant Denyer. The motor racing driver turned television presenter was last night nominated for the 2018 Gold Logie, and already betting agencies have him pegged as the second-favourite to take home the statue (behind The Living Room‘s Amanda Keller).

It’s a teensie little detail that’s been raising eyebrows, with some – including the former Family Feud host himself – noting the slight, erm, awkward nature of his nomination for Gold (a.k.a The Most Popular Personality on Australian Television).

“Absolutely blown away to be nominated for Gold Logie. Now [if only] I still had show to promote,” he wrote on social media.

“The nomination is such a wonderful send off for Family Feud and all the spectacular people who work on it.”

The reality is, the official public voting period ran between April 1 and March 5, two months before Denyer announced the cancellation of his Channel 10 program.

Breaking the news on his 2DayFM breakfast show, Denyer told co-hosts Em Rusciano and Ed Kavalee that it was “a bit sad” to see the end of Family Feud, but added that after four years and 1200 episodes it was time to move on.

“It did good things, but we’re probably guilty of driving it into the ground a little bit too early,” he admitted.

“We gave it a bit too much… Six days a week, twice a day… We might have squeezed that lemon a little bit too much.”

Still no dice for Lisa Wilkinson or Leigh Sales. One day, folks. One day…

I genuinely thought Grant Denyer was one of those people who was on TV because he was bland, inoffensive and relatively competent and not because anyone was actually craving entertainment featuring Grant Denyer. The fact that there are, in fact, people who like him so much that they've bothered to nominate him for an award blows my mind.

It's the same reason (other than the occasional baking recipe that calls for them) Arrowroot biscuits are still available. Some people genuinely love bland and inoffensive ;)

Or it could show the dearth of options?