Fans have spotted a detail in one of Bill Goldsmith’s Instagram Stories and it’s a little bit awkward.

After the former Bachelorette star shared a photo of his laptop as he caught up on emails on Friday, fans noticed one particular email.

According to the Daily Mail, one of Bill’s emails was about a collaboration with a clothing company – you know, the collabs where you get free stuff in exchange for promoting it.

And then on Monday, Bill even shared a snap of the clothes he had received.

Bill is one of many former reality TV stars who has gone on to do deals and collaborations with brands.

The former Bachelor is reportedly appearing on Bachelor in Paradise – and there’s already some pretty steady rumours on who he could couple up with.

According to an anonymous source who spoke to Now To Love, the first love triangle of Bachelor in Paradise will involve Bill, Florence Moerenhout (from Matty J’s season of The Bachelor) and Alex Nation (Bachelor Richie Strahan’s former partner).

Apparently Bill “hits it off” with Alex, but Florence reportedly swoops in for a shot at the Melbourne plumber.

Only time will tell!

2. Nigella Lawson has called out TV stations for airbrushing her appearance.

We didn’t think we could love Nigella Lawson more than we already do but as it turns out, yes, we can.

The beloved celebrity chef and spirit animal of midnight-snack lovers (i.e us) has called out US TV networks for editing her curves. The star chef tweeted that she has had to tell TV stations not to edit her "sticking out stomach", expressing that she is fed up with "the hatred of fat" and the assumption we'd all prefer to look thinner.

I’ve had to tell American tv stations not to airbrush my sticking out stomach. The hatred of fat, and assumption that we’d all be grateful to be airbrushed thinner is pernicious.

3. The hilariously bizarre way Julia Roberts first found out she was famous.

Yes - the 51-year-old actress revealed the moment she realised she'd become a star occurred in a bathroom, after she had starred in the 1988 film Mystic Pizza. 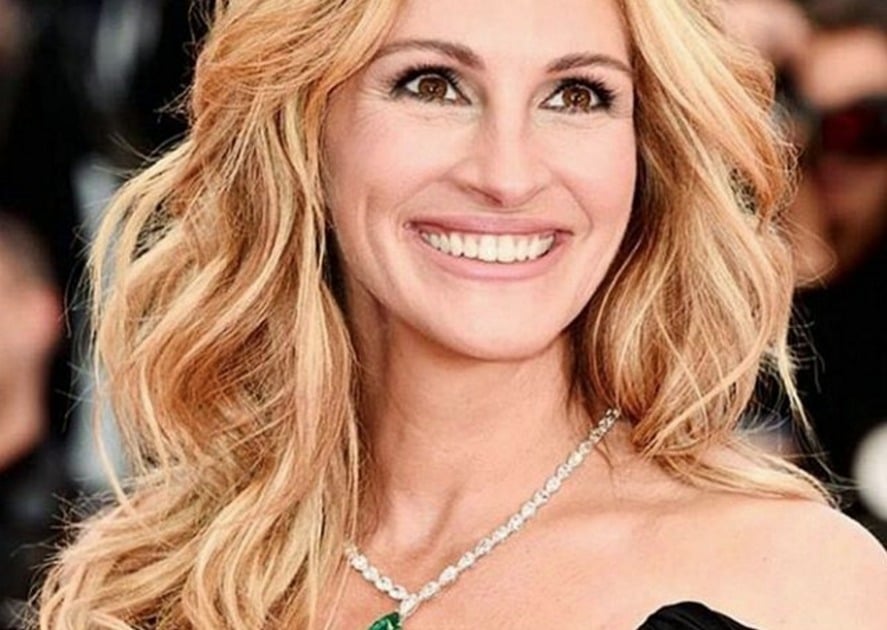 ...But it wasn't while she was washing her hands, where most bathroom chit-chat takes place, it was while she was actually peeing.

The Oscar-winner told The Hollywood Reporter's Awards Chatter podcast she had been to the movies with her family and was in the toilet afterwards when a woman called out to her.

"It was after the movie was over and I was in the bathroom and there was a woman in the bathroom who said, 'Hey, girl in stall number one, were you in Mystic Pizza?'" she recalled.

The fan then proceeded to slip something under the stall, asking Julia to sign it.

"And I thought, wait, this is different," she added.

...Yeah, we probably wouldn't have signed something that was slipped under the bathroom stall, either.

Right, so Emma Stone has confessed to having never watched arguably her breakout film Easy A and we are more concerned about it than we should be.

1. Does that mean she's never seen this scene?

And, 2. Does that mean she hasn't had 'Pocket Full of Sunshine' stuck in her head since the year it came out like the rest of us?

"I went to a friends-and-family screening to see it," she said, "and I had to get up and walk out. Who wants to watch themselves for that long?"

"I was 20 and I put so much pressure on myself. While we were shooting it, I was just going nuts and was like, ‘I don’t know, this whole thing could fall apart, I have no idea.’ I had to be there all day, every day. And if I wasn’t on screen, I was narrating, and it was just too much me."

"It was the first time that I had ever had to rely on myself mostly to be able to carry all that," she said, adding, "I think I just put so much pressure on myself."

Still... you should really get around to watching to whole thing, Emma.

You may recall that at the end of this season of The Bachelorette, Ali Oetjen and Taite Radley declared their undying, six-week love to each other.

They then rode off into the sunset, eating protein balls/talking about leg day, and lived happily ever after.

You see, although the bachie couple are publicly saying they're still together, things seem... fishy.

A lil' bit suss if you will.

Like all bachie couples, Ali and Taite's brief relationship has been punctuated with rumours. And there's been some absolute doozies.

Basically, some "friends" of the couple believe they're always very close to breaking up, that Ali is controlling, and that Taite is just in it for the free stuff.

A "friend" of Taite reportedly suggested that the couple’s relationship wasn’t genuine.

“Taite is only sticking around to get his Instagram numbers up and enjoy the perks of paid posts and free holidays,” the source told New Idea.

You can read about the other reasons why Ali and Taite may have broken up right here on Mamamia.

If I was an actor, I'm not sure I'd watch any of my films. I can't think of anything worse than watching myself and listening to my recorded voice for 90+ minutes.

I’m still annoyed that every article that talks about that other email is mocking the spelling. As if dyslexia and other learning disorders don’t exist. Really low.