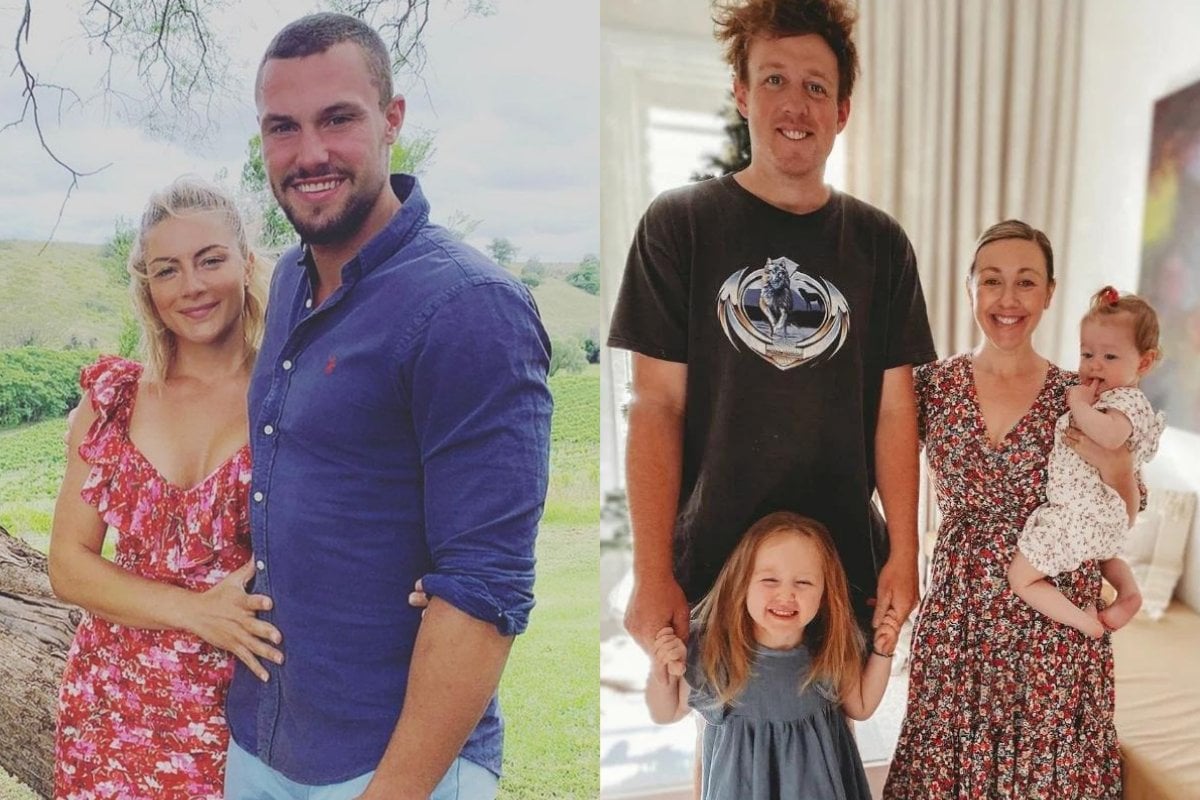 Before there were rose ceremonies and bula banquets, we became obsessed with a different kind of reality show. One with hard hats, hammers and (of course) a whole lot of drama.

Yep, we're talking about The Block, which wrapped up its 16th season last year and saw Queenslanders Jimmy and Tam crowned the winners.

So while we're all missing the renovation, room reveals and Scotty Cam's many puns, we thought we'd take a look at what some of our favorite contestants are doing now.

Here's where 12 of the most memorable Blockheads are now.

This year, the twin brothers are competing for a chance to take out the win for their modern home nestled in the suburbs of Melbourne on The Block.

Back in 2019, Josh obtained the $50,000 winner's prize money with his then-girlfriend Anna McEvoy on Love Island.

While his twin brother, Luke (who was also on the show) did not find his match on Love Island, he did find someone who "makes him the happiest man," with his now-fiance Olivia, who is a lawyer.

On Monday, the couple announced they are now expecting.

"It wasn't planned, but we always said, 'If it happens, it happens,' and that's how we've approached the situation, but we were both stoked when we found out," Luke told Woman's Day.

"It was such a happy time," Olivia added.

Currently, the pair are four-months pregnant.

While a baby was not a part of their immediate plans, it has been the best surprise for them.

"We were looking at a few wedding venues, but then the pandemic and The Block happened, so we put it on hold, and shortly after that Olivia was pregnant!" Luke explained.

"It would have been around this time that we were looking to get married, but we couldn't be happier.

"I'm really looking forward to it."

While it may not be Josh's baby, he explained Olivia will be dealing with him much more than she might like to.

"Liv knows when you marry a twin, it's a package deal, so she's going to have to deal with me quite a lot as well," he said.

The former Love Island winner, Josh, is convinced the baby will be a girl, so when asked how he plans to be the best uncle, he said: "I'm going to spoil her! I don't think I'll be a dad anytime soon, so it'll be a bit like trial and error for me."

"We're definitely going to have another and then we'll just see financially where we're at," Luke said. "If we can afford a third, I'd definitely like to have a third."

The 27-year-olds are this year's youngest contestants. They had previously never renovated before, but were massive fans of the show.

This year, Josh and Luke were embroiled in a major cheating scandal (you can read all about it here) which defined the way fellow contestants perceived them on The Block for the better part of the competition.

Early on into the show, viewers discovered the twins had gotten a photo of The Block's production schedule, which other contestants, Ronnie and Georgia believe helped secure them their first win in the master room challenge.

"The photograph, taken in my office of our production schedule, then handed around The Block," said Scott Cam.

"We're talking room reveals, challenge days... It's beyond rude, it's a slap in the face to everyone involved. Unbelievable."

Dan competed on the show in 2012 and 2013 with his partner Dani and now works as the site foreman. After the show, the couple, who also starred in the series Dan vs Dani, launched their very own design business called the Red Door Project.

They're also currently working on building their dream house in Blairgowrie, Victoria.

"Just a coupla kids (not really) standing in front of their dream. Almost four years ago @foreman_danreilly and I bought a piece of land in Blairgowrie about 400m from the ocean after a weekend away on the Peninsula. Today, we are prepping to finally turn soil TOMORROW!", Dani shared on Instagram in November.

Josh and Jenna famously got engaged on The Block back in 2011. Josh proposed the same night their house failed to sell at the auction.

Speaking to Mamamia last year, Jenna said the surprise proposal "put things into perspective for me".

"We were so worried about the house and then Josh proposed and it makes you realise that’s our life, it’s not The Block."

Their house was bought a few days later, ultimately making them a $50,000 profit. The pair later competed on The Block All Stars in 2013, where they took home $275,000 in total winnings.

The couple ended up tying the knot in 2012 before welcoming their first child, named Freddie, in June 2017. They also welcomed a second daughter, named Story, in January last year.

Since the show, Josh and Jenna have started their own Design School, where they take on 70 students at a time. Josh also currently works as a commercial plumber.

Fun fact: Josh is the brother of Googlebox's Adam Densten.

A post shared by Building Our Dream Home (@joshandjenna)

Twin cops Alisa and Lysandra earned themselves $395,000 in profit when they won The Block in 2013. They also competed on the show again in 2014 for The Block Fans vs Faves but lost out to Steve O'Donnell and Chantelle Ford. But they didn't walk away completely empty-handed - all up they've made $1.01 million from The Block prize money, making them the two of the show's most successful contestants.

Since the show, the sisters have kept busy running their successful design business and have worked together to renovate a heritage home in Melbourne's Albert Park. They've also launched their own naturally derived range of hand and body products called Al.ive Body.

Josh and Elyse took home $547,000 in prize money after comedian Dave Hughes bought their Elsternwick property for a casual $3.06m in 2017.

Speaking to Mamamia the following year, 28-year-old model Elyse said she considered backing out of The Block.

Thankfully it all paid off.

In 2019, the couple moved to Byron Bay and they recently purchased a 1960s beach house - the perfect renovation project for the couple and their business J & E Projects.

They also announced they were expecting their first child together in September last year. Elyse shared an Instagram photo with Josh in front of Uluru with the caption, "and then there were three".

"We were so disappointed. It was hard to watch the next auction after us. And some of the other contestants were disappointed with more than a hundred grand!" Carlene told Stellar Magazine in 2019.

The following year, the couple appeared on the series Reno Rumble but were sadly the first team eliminated.

However, that wasn't the last we saw of Michael and Carlene. The parents-of-two went on to host their very own reality series, Ready, Set, Reno and have launched their own business, Cedar & Suede.

Darren and Dea made Block history in season 10 when they walked away with the largest amount of prize money. The builder and interior designer earned themselves an eye-watering $935,000 in profit.

Following their success on the show, they began flipping houses and spent 11 months renovating a worker’s cottage in Kew East, Victoria, which they later sold for $2.9 million.

Unfortunately, the pair decided to go their separate ways in September last year.

"This is a very difficult time for me and my girls," Dea said in a statement to the Herald Sun at the time.

"We have been blindsided and left devastated by Darren’s action. But I'm focusing on my two daughters who are my number one priority. Please respect our privacy while we move on."

Darren also spoke about the breakdown of his marriage and mental health issues in February last year.

"Spending three weeks in a mental facility to deal with depression. Leaving my 15-year marriage because I fell out of love and wanted a happier life," he said at Collingwood's annual general meeting, according to the Daily Mail.

He also shared that he admitted himself to hospital, which he said was the "best thing [he] could have done".

Kyal and Kara have kept themselves busy after competing on The Block in 2014. The couple, who also appeared on Reno Rumble, run their own successful design company and have recently completed renovating their very own 'forever home' for their family of four.

The house, which Kyal and Kara bought pre-children and pre-reality TV, was formerly a small beach shack on the New South Wales Central Coast, which knew would someday be transformed into a tropical family oasis.

The pair documented the whole process on their blog and Instagram. And you can check out all the photos here.

Mitch and Mark haven't stopped renovating after competing on The Block in 2019. They even worked with Married At First Sight couple Jules Robinson and Cam Merchan on making over their new house.

"We’ve been doing some work on our new house and recently got to help Cam and Jules (MAFS) on the makeover of their new home. They are lovely and it was such a pleasure to help them and teach them some home reno tricks," they told Insider Style.

"We’ve also been working on design projects for clients that are exciting. I guess we can’t stop, we really enjoy the process of changing up interiors and creating beautiful, functional spaces."

After taking home $291,000 on The Block in 2013, Madi and Jarrod announced they were getting divorced.

According to Now To Love, Jarrod works as a carpenter and furniture maker, and got engaged to his new partner in February 2018.

Madi remarried in 2015 before giving birth to a daughter in July 2017. She later welcomed her second child in 2019.

Controversial couple Ronnie and Georgia launched their own renovation company after competing on The Block in 2017.

"It's called Renovation HQ. We work together to help people transform spaces in their home. Lots of people have been contacting us wanting to renovate small spaces like bathrooms and kitchens. [We've] been doing a lot of design consulting," they told Channel Nine.

The pair also hosted their own renovating series, Quick Room Flips, and made a guest appearance on The Block in 2018.

Last but not least, we have Whitney Nolan and Andrew Simmons, who appeared on the show in 2015. Unfortunately, the couple decided to call it quits shortly after the series went to air.

"There were tears," Whitney told Woman's Day at the time.

"He was upset and I was upset, but I think we both understood it was coming to an end. We both knew it was going to happen because I wasn’t happy for a little while".

The pair have remained out of the spotlight ever since. But according to Now To love, Whitney now works as a cosmetic tattooist.

Who was your favourite team from The Block? Let us know in the comments below.

P
pollyanna a year ago