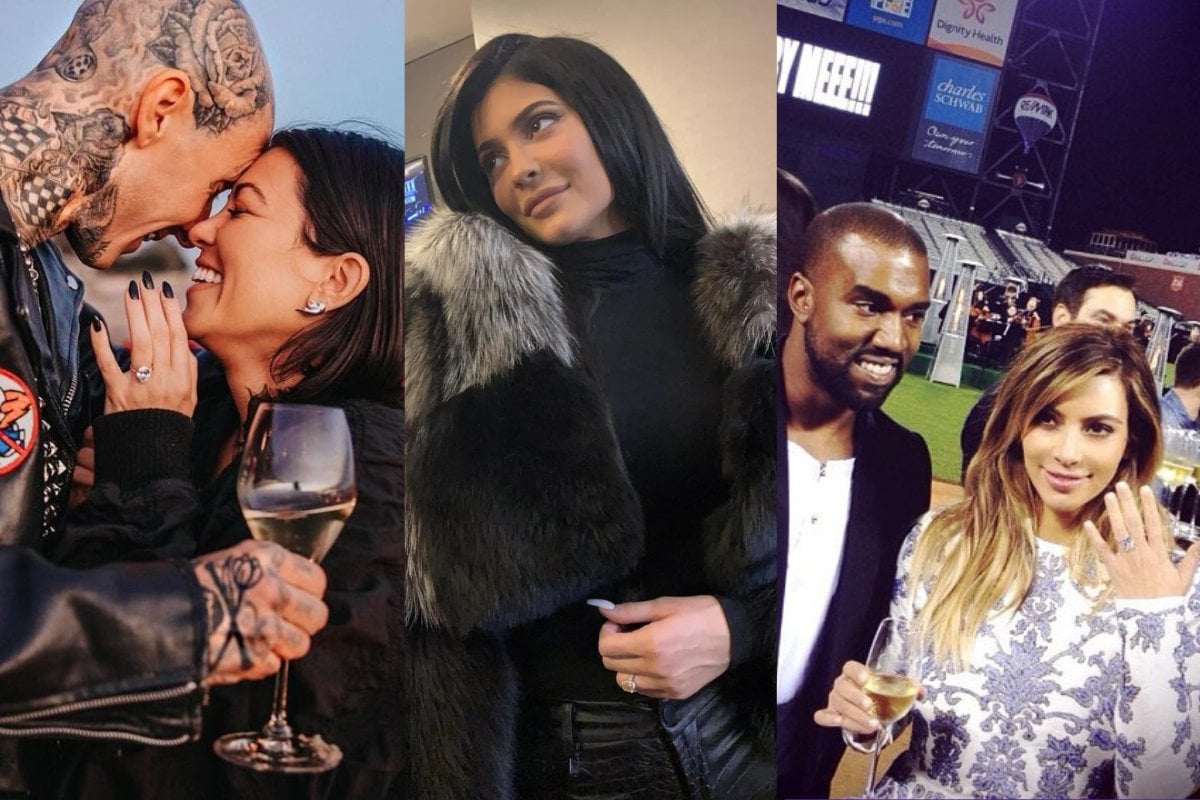 In case you missed it, Kourtney Kardashian is engaged to Travis Barker. *cue tears*

But she is not the first, and very unlikely to be the last Kardash-Jenner to get engaged.

In fact, the family have long had the public deeply invested in their many (and frankly downright fancy) proposals throughout the years.

So without further ado, here are the Kardashian proposals, ranked. Because believe it or not, there are some that are better than others....

While we're on the topic of proposals, watch this boyfriend proposesto girlfriend in full body paint. Post continues after video.

Many of us are very up-to-date on the relationship between makeup mogul Kylie Jenner and her on-again-off-again, rapper boyfriend Travis Scott. But if you're not, we need to inform you of a brief period of time where we all truly believed wedding bells were about to ring.

You see, rumours swirled about the pair's secret proposal and even more top-secret wedding.

In 2019, Scott performed at the Super Bowl Halftime Show - a milestone for any artist. Although fans were disappointed when the show ended without a public proposal, it seemed like Jenner had been given one off-screen as she appeared later in Instagram stories with a very large diamond ring on her finger.

The self-made billionaire is known for tricking fans by wearing engagement-looking rings, but this time all signs pointed to a legit union. Plus, on her Instagram, Kylie kept referring to her partner as her husband. HUSBAND!

Unfortunately, wedding rumours came to a halt when Travis Scott told Rolling Stone that year: "We’ll get married soon.... I just gotta sturdy up — I gotta propose in a fire way."

It's been two years, mate... Give the people what they WANT.

Before Travis Barker, there was Scott Disick. Together, the eldest of the Kardash-Jenner clan and Scott Disick share three children together: Mason, 11, Penelope, nine, and Reign, six. 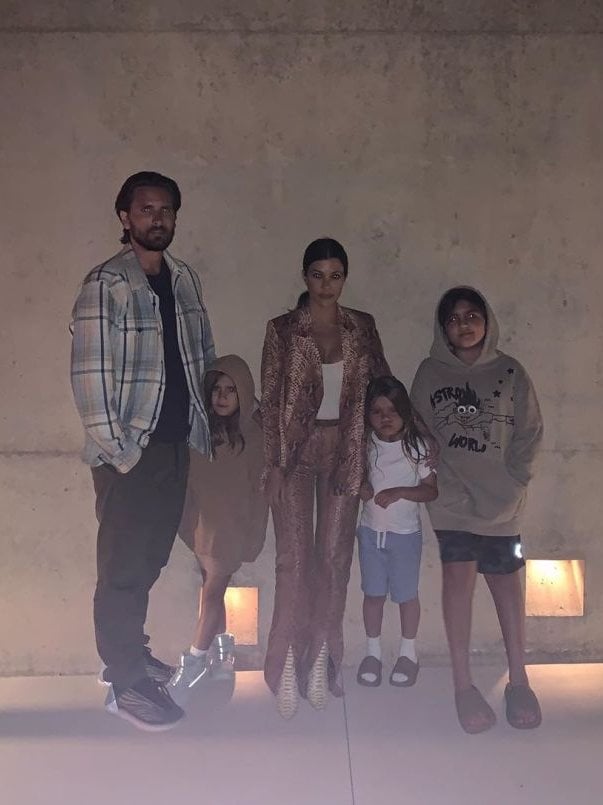 Kourtney shared a thoughtful message for Scott Disick on Father's Day in 2020. "Thankful for you and these three special ones." Image: Kourtney Kardashian Instagram.

While their proposal was not as lavish as Kourtney and Travis', it may have a lot to do with the fact she was never set on marriage with her former partner.

In a previous Keeping Up With The Kardashian's episode, Kourtney admitted the concept of marriage "scared" her. She often resisted proposals from Scott, including in 2011 when fans watched on as Kourtney asked why he would want to "mess it [their relationship] up".

And in 2017, Scott admitted that at one point he did properly propose with a ring.

"It was really weird," he told Kim on KUWTK. "I don't think we told anybody, actually. It was somewhat cute and then we just got scared about like, media and this and that.

"And we were like, 'Let's just put the ring aside and we'll talk about it another day.' Never spoke about it again."

Kim and Kris' 72-day marriage was a disaster, right from the, er, second proposal...

While the pair ended their marriage in 2011 after a televised wedding and a 'sham' proposal, the season in which their relationship took place remains to be one of the most watched in KUWTK history.

In 2010, Kim and Kris began dating, by May 2011, they were engaged. "He just has a really good heart," she told Us Weekly in February 2011. "There has to be trust and honesty and chemistry. If you don’t have any of those, it’s never going to work."

Their whole proposal was caught on camera, and it was apparently a strategic move that Kris claims was completely fabricated. The NBA player initially had plans to drop down on one knee and propose in Minnesota - but his plan was rejected by producers and even Kim herself.

In October of that year, Kim filed for divorce from Kris, after 72 days of marriage.

The reality star opened up about the very quick relationship during the 20 Seasons of 'Keeping Up With The Kardashians', admitting she "absolutely" owes her ex-husband an apology.

She went on to say she regretted her decision to marry Kris when the couple were on their honeymoon in Italy, and she felt "claustrophobic" just from looking at his shoes in their hotel room.

According to Kim, her mother told her: "Go. I'm going to put you in a car. No one will find you. Just leave, and I'll handle it." 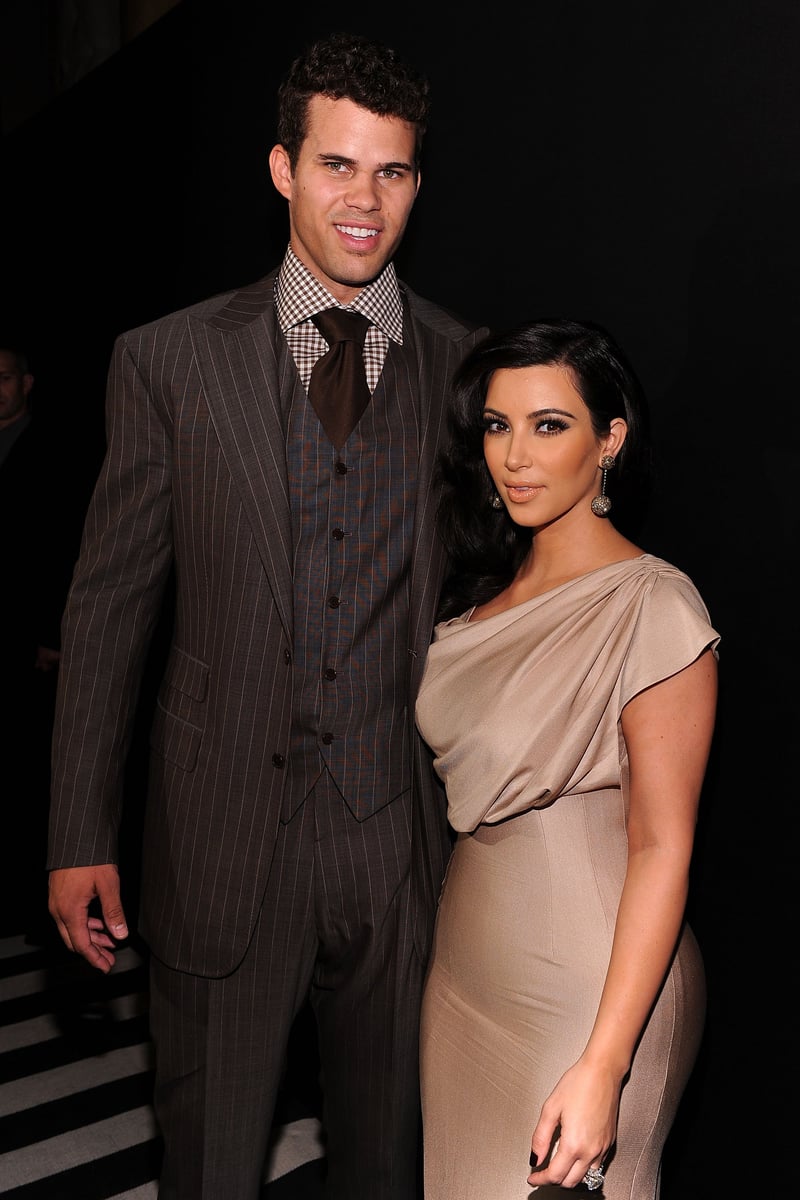 "I was so nervous to break up with someone," Kim explained. "I totally handled it the wrong way. I fully broke up with him in the worst way, and I just didn't know to deal."

From neighbours, to close friends, to newly engaged - what a sweet love story. *Cue happy tears*

The pair shared photos on Instagram of Blink-182 drummer's proposal at a beach in California, alongside the caption: "Forever."

The next day, Kourtney shared more photos from the engagement with the caption: "I woke up all night thinking it was a dream."

There was an elaborate display of red roses and candles on the sand, and it may just be the sweetest proposal ever.

The couple initially denied dating rumours earlier in 2019, when Barker and Kardashian were seen grabbing dinner together with their kids.

"Kourtney’s like a dear friend. That’s it... I mean, I love her to death. I love her family to death. But yeah, just friends," he told People.

The pair would go on to confirm their romantic relationship around Valentine's Day in 2021.

The proposal that followed nine months later was not in a private setting. In fact, it was at the public Rosewood Miramar beach. And it was a fan who leaked the news before anyone else on Instagram.

"So I just watched @kourtneykardash and @travisbarker get engaged tonight. You heard it here first," @blakekirsch shared.

"I saw [them] walking in, and I thought something was up. @jeffleatham was doing a flower field on the beach, so I knew it was going to be an engagement. It was so beautiful! Love to see a love story unfold in front of my eyes."

Barker has two children with his ex-wife, Shanna Moakler - Landon, 17, and Alabama, 15.

Their connection is not just based on years of friendship though, but the fact they are both parents.

"I've done both up until now. I dated girls who didn't have kids and I find it hard because they would have trouble understanding like, 'Why don't you want to go to dinner every night with me?' or 'Why don't you want to see me every night?' And now I'm spending time with a woman who's a great mum, who's a great friend and you don't have to worry about any of those things," Barker told Barrymore.

"It just comes natural, it's like a maturity thing," he added.

All that's left to say about that is... Bring. On. The. Wedding.

On that note, listen to The Spill, where hosts Laura Brodnik and Kee Reece share the scandalous detail hiding behind Kourtney Kardashian and Travis Barker's engagement photo. Post continues after podcast.

Rapper Kanye West may have pulled off the ultimate proposal of all time.

On Kim's 33rd birthday, Kanye rented out the entirety of San Francisco's AT&T baseball stadium, which is home to the San Francisco Giants. To make it that bit more cheesy, he chauffeured her to the massive venue all the while her eyes were covered with a blindfold.

When she took it off, there was a Jumbotron which read: "PLEEEASE MARRY MEEE!!!"

...Talk about a rom-com romance.

Along with an entire film crew documenting every minute of the proposal, there was also a complete orchestra which performed an arrangement of Lana Del Ray's 'Young and Beautiful', followed by Keri Hilson's 'Knock You Down' which had a special guest verse by Kanye.

"They say I move too quick but we can't let this moment pass us," he rapped. "Let the hourglass pass right into ashes / Let the wind blow the ash right before my glasses / So I wrote this love letter right before my classes."

Despite how romantic the proposal may have been, he made sure to include Kim's family and friends - in fact, lots of friends - in the incredibly lavish night too. Which you can see here:

The entire proposal was planned by Kanye, with him telling Vanity Fair back in 2013: "Yeah, I planned all of that. It was very much a DONDA exercise. [DONDA is West’s creative agency] Like, I sit with my team of creatives, and we’ll say, 'What’s the best version of this? How can we get this?'"

When asked why he chose a baseball stadium of all places to ask Kim for her hand, his explanation was simple.

"I just thought it would be dope."

He gave her a 15-carat Lorraine Schwartz ring, valued to be worth AUD $2.7 million. Sheesh.

They would go on to have four children all up - North, eight, Saint, five, Chicago, three, and Psalm, two.

In 2021, it was reported that Kim had filed for divorce, after six years of marriage.