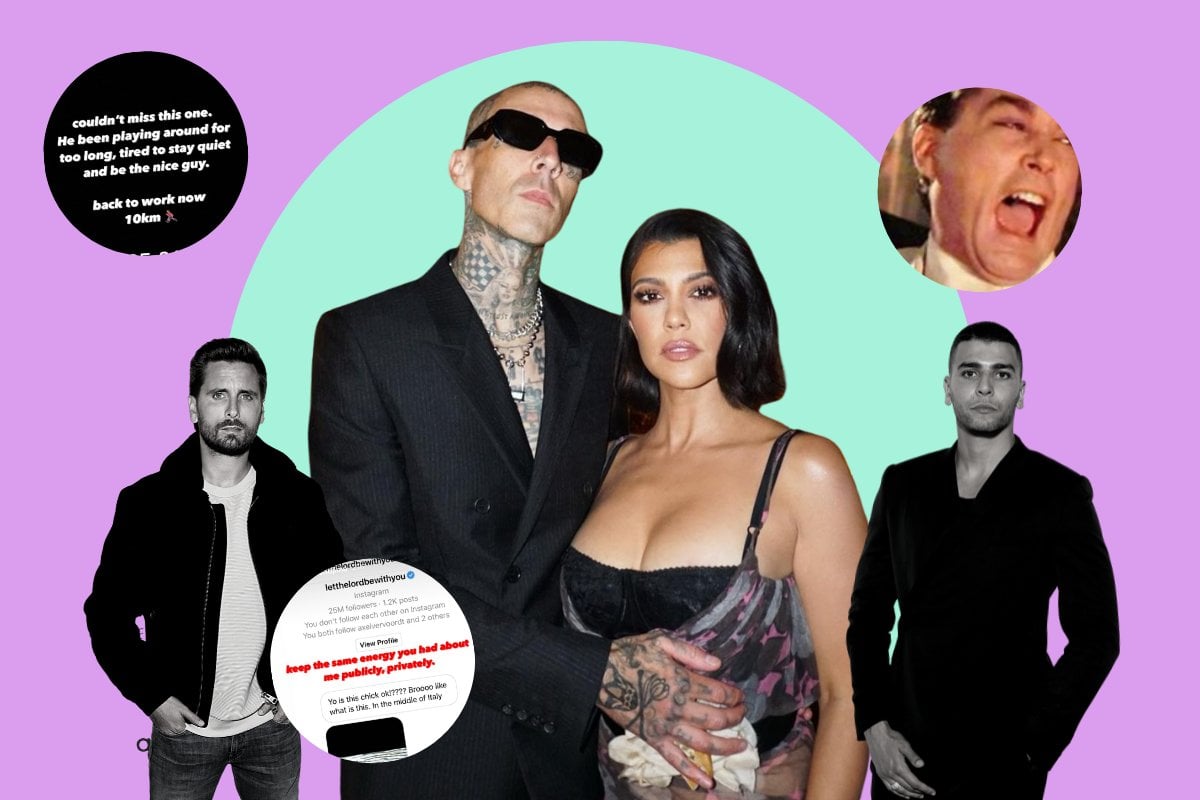 Kourtney Kardashian and Travis Barker have been living their best, PDA-packed lives in Italy recently.

Nice for some, huh. I'd sell my soul for a summer in Italy.

But whatever, that's not the point of this story. Because while Kravis (is that a thing?) has been pashing in a myriad of beautiful places, Kourtney Kardashian's exes have been (allegedly) discussing it all. Privately. Until now.

This is so messy. I kind of love it.

On Monday local time, Younes, 28, posted screenshots of Instagram DMs that he (allegedly) received from Scott, 38.

In it, Scott (allegedly) shared a photo of Kourtney, 42, and Travis, 45, being very affectionate on a yacht with Younes and said: "Yo is this chick ok!???? Broooo like what is this. In the middle of Italy."

My favourite part is that the photo isn't from someone else's IG. Scott's read an article, screenshot a photo, saved it to his camera roll and then sent it to Younes. Wild. And at no point in that process did he think, 'hmm, better not.'

Then, Younes (allegedly) responded to say it "doesn't matter to me as long as she's happy. P.S I ain't you bro," which is SO PETTY.

"Keep the same energy you had about me publicly, privately," he wrote overtop.

Then in a second story post, he said Scott has "been playing around for too long" and he was tired of keeping quiet and being the nice guy. 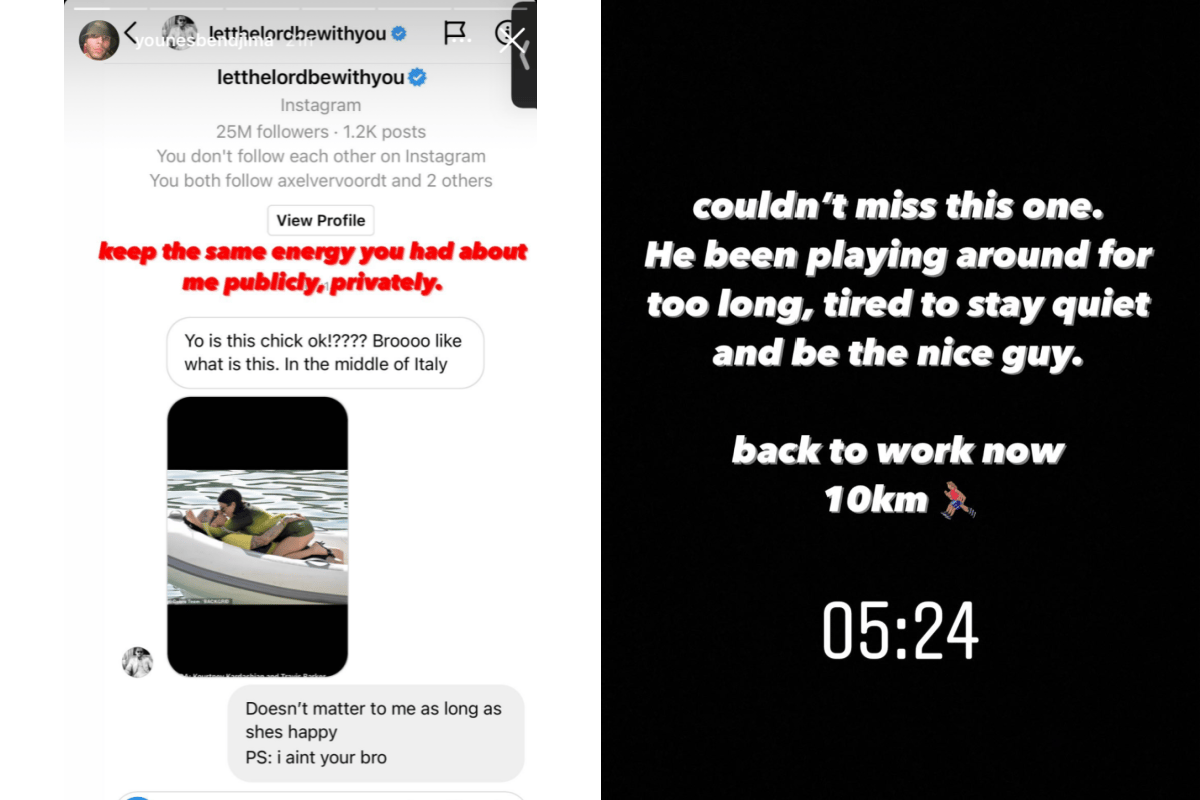 So... does that mean Scott has been regularly (allegedly) shading Kourt to Younes?? Do they regularly share messages about her and Travis' kissing tour of the world?

THE AUDACITY OF IT ALL.

WTF. How have Kourtney and Travis reacted?

Okay, so both Kourt and Travis have posted things that people have attributed to this whole drama, even if they haven't confirmed it.

On his Insta story, Travis posted a meme of a guy laughing. 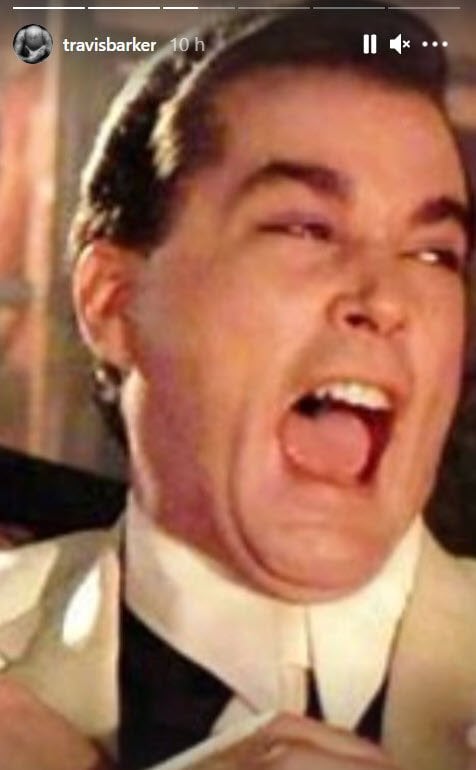 Kourtney has been a bit more... ambiguous, sharing a rogue Bible verse about keeping secrets(???) on Twitter.

John 15:7
If you remain in me and my words
remain in you, you may ask anything you wish, and it will be done for you.

Meanwhile, Scott has been too busy sharing content from his extremely self-aware 'luxury brand' Talentless to address the (alleged) slight publically. Would love to see Younes' DMs right now though.

This is a whole mess. Anything else I need to know?

Honestly, we all know way too much about this already.

But I guess, for context:

Scott is the father of Kourtney's three children, Mason, Penelope and Reign. They were in an on-again-off-again relationship for... a very long time, until about 2015.

She's been dating Travis since January 2021.

The reason Scott may have thought he and Younes could bond over their ex's PDA may be down to a shady April 2021 Insta story:

"Shamelessness has become so normal in today's society that modesty has become strange," Younes shared at the time.

It didn't address Kourtney directly, but she and Travis have become well known for their very ~handsy~ public relationship, so fans assumed there was a connection.

Actually, Kourtney and Travis' relationship has brought A LOT of exes out of the woodwork:

Back in May, things got messy again when Travis' ex-wife Shanna Moakler alleged he had cheated on her with Kim Kardashian... who is uh, obviously Kourtney's sister. Awkward. Shanna has stuck by her story, but Kim denied the allegations.

The whole thing has led to a series of barbs between Shanna, Travis and their children Landon, 17, and Alabama, 15.

Landon said on TikTok that their mother "isn't in [their] lives like" their dad, and Alabama has shared on Instagram that her mum isn't a major part of her life.

This all led to Shanna complaining to paparazzi that "my family's broken because of this family", which is... a big yikes.

The only way this could get even weirder is if ol' mate Justin Bieber, who Kourtney was rumoured to be seeing in 2015, starts posting shady DMs as well.