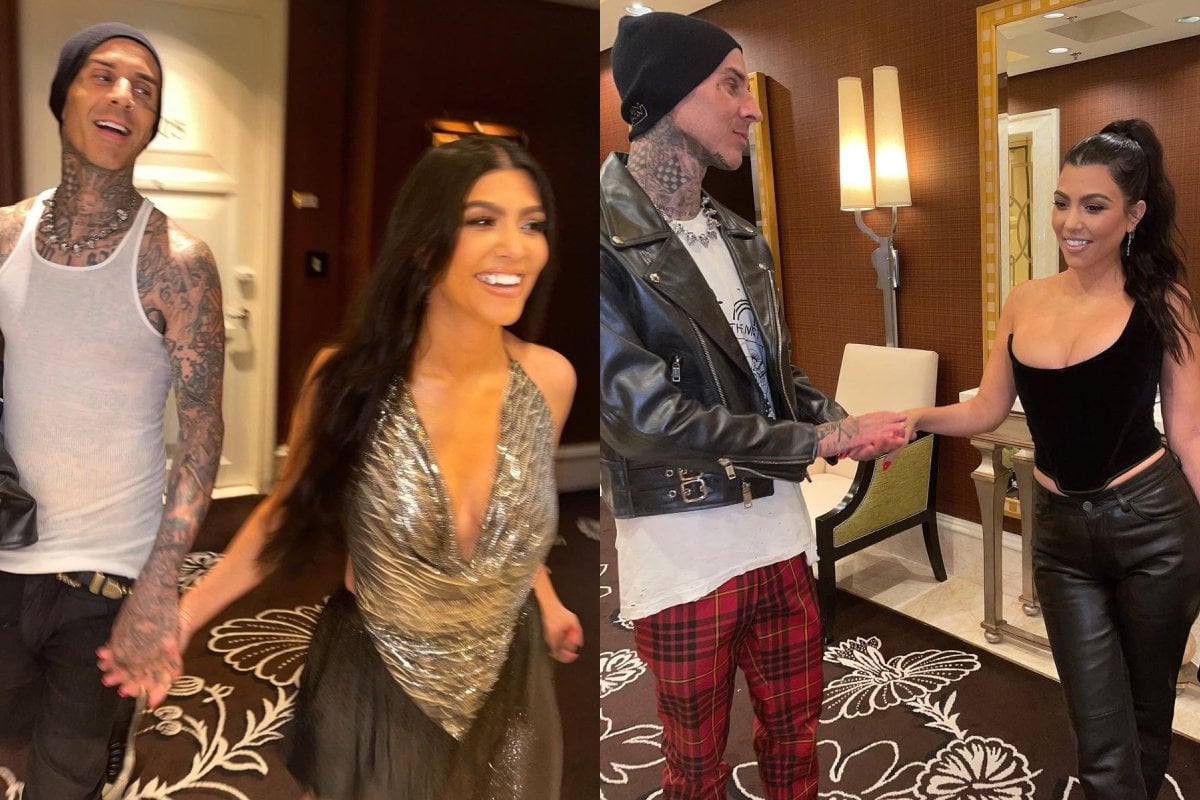 Kourtney Kardashian and Travis Barker are undoubtedly one of the most unexpected celebrity couples of 2021.

Since becoming official in February, the Poosh founder and Blink 182 drummer have quickly become notorious for sharing PDA-filled snaps of their relationship on social media. Now, their most recent posts have sparked 'secret wedding' rumours.

Before we look into that, let's discuss how their relationship started.

Watch the trailer for the final season of Keeping up with the Kardashians here. Post continues after video.

Kourtney Kardashian and Travis Barker have actually known each other for years.

Having both lived in Calabasas, California, for a long time, the musician and reality TV star became friends through mixing in the same circles. Barker knows the Kardashian family well and has previously appeared on Keeping up with the Kardashians.

In 2019, after being spotted at dinner together with their kids, relationship rumours started swirling. However, Barker denied them.

"Kourtney’s like a dear friend. That’s it... I mean, I love her to death. I love her family to death. But yeah, just friends," he told People.

Two years later, that all changed.

In January 2021, followers of Kardashian and Barker noticed they both posted Instagram Stories at Kris Jenner's Palm Springs home. 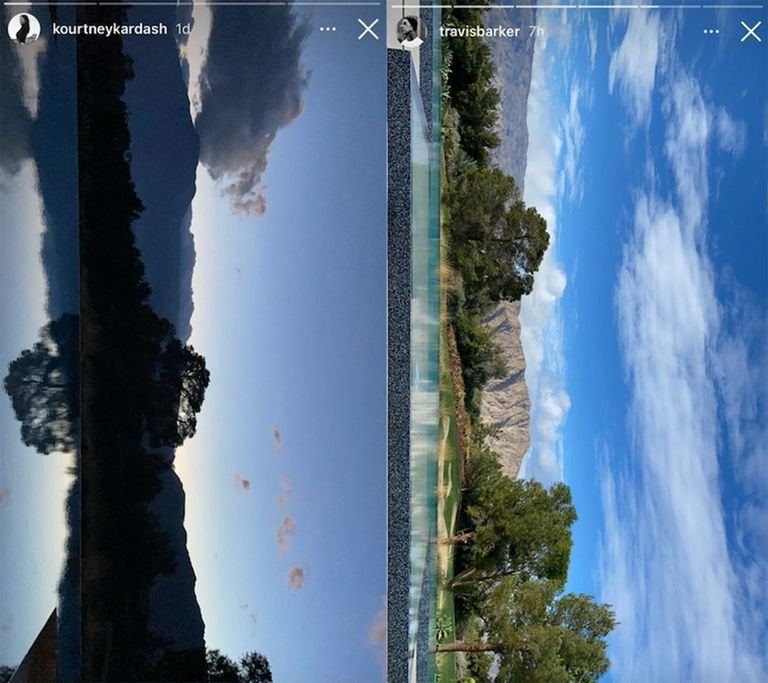 Soon after, a source confirmed their holiday together and relationship status, telling People: "They're in Palm Springs together. They've been dating for about a month or two. They've been friends for a long time but it's turned romantic. Travis has liked her for a while."

Another source told Entertainment Tonight how Scott Disick - Kourtney Kardashian's ex-partner and father of her three children, Mason, 11, Penelope, 9, and Reign, 6 - felt about her new romance.

"It's always a bit of an adjustment when one of them is dating someone new, but at the end of the day, he obviously wants Kourtney to be happy and they're focused on co-parenting together," they said.

After back-and-forth banter on social media, Kardashian made their relationship official in February, posting a photo of her holding hands with Barker on Instagram.

While Barker shared a note from his new flame on his Instagram Story, which read: "To lots of fun adventures, may we destroy each other completely. Love Kourtney." 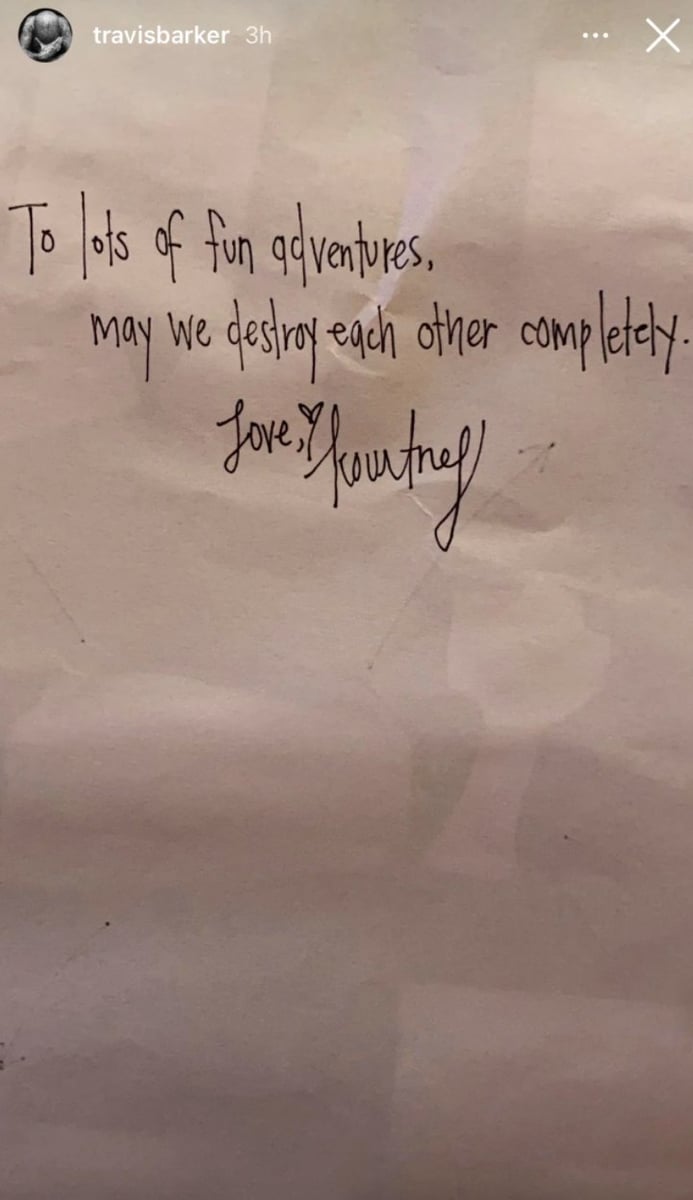 During an appearance on The Drew Barrymore Show in March, Barrymore discussed the note saying: "My love note would be like, 'Can we get to bed early and watch a movie?'"

Barker who also has two children with his ex-wife, Shanna Moakler - Landon, 17, and Alabama, 15 - opened up about dating partners who have kids and those that don't.

"I've done both up until now. I dated girls who didn't have kids and I find it hard because they would have trouble understanding like, 'Why don't you want to go to dinner every night with me?' or 'Why don't you want to see me every night?' And now I'm spending time with a woman who's a great mum, who's a great friend and you don't have to worry about any of those things," he told Barrymore.

"It just comes natural, it's like a maturity thing," he added.

After announcing their relationship, the couple started regularly posting gushy, PDA-filled photos together.

Barker also got three tattoos - one inked by Kourtney saying "I love you", another in her handwriting saying "You're so cool" and finally, "Kourtney" across his chest.

Speaking to E! News, a source shared that both of their children love the relationship too.

"Kourtney has become very close with Travis' kids recently," the source said, adding that she's been "a huge support system."

Over the weekend, the couple attended a UFC match in Las Vegas, where they continued their tradition of intense PDA by sharing a series of blurry Instagram photos together.

But it was a photo by Kardashian's hairstylist, Glen Oropeza, that caught everyone's attention (and sparked the wedding rumours).

Underneath a carousel of photos of the couple, he wrote: "...NOWWW I understand why people tie the knot in Vegas. There’s nothing like love AND a good time."

While Barker's daughter, Alabama, shared photos of them and said: "So happy for you guys." 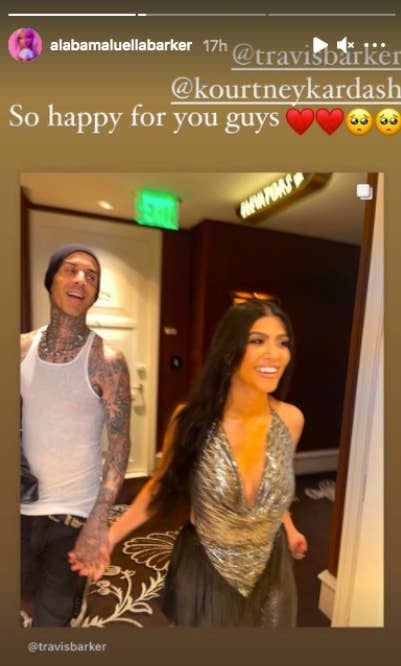 Despite neither Kardashian nor Barker confirming the nuptials, it sounds like their relationship is far from just a fling.

Guess, we'll just have to wait until they share more.

Reply
Upvote
1 upvotes
I will forever roll my eyes at the excessive pda photos (that goes for anyone, not just these two), but that video of Travis teaching her daughter to play the drums is pretty cute. If everyone's happy, and the kids are getting along, then good for them.

Reply
Upvote
1 upvotes
@rush I was one that posted waaaaay too many of me and my ex-husband, I think of it now and cringe. It was like I was trying to convince myself and the rest of the world I was happy. Granted I’m not a ‘brand’ to the world, but if you’re truly happy, you’re in the moment, not worried about getting photos of it, even with my kids I don’t have photos of special times because I learned to be fully in the moment.
News
General
Opinion
True Crime
Politics
Sport
Explainer
Entertainment
Celebrity
Reality TV
Movies
TV
Books
Rogue
Royal
Lifestyle
Beauty
Fashion
Weddings
Home
Wellness
Health
Fitness
Travel
Food
Parents
Before The Bump
Pregnancy
Baby
Kids
Teens
School
Parent Opinion
Work & Money
Money
Finance
Career
Lady Startup
Relationships
Sex
Dating
Separation
Friendship
Family
Real Life
Couples