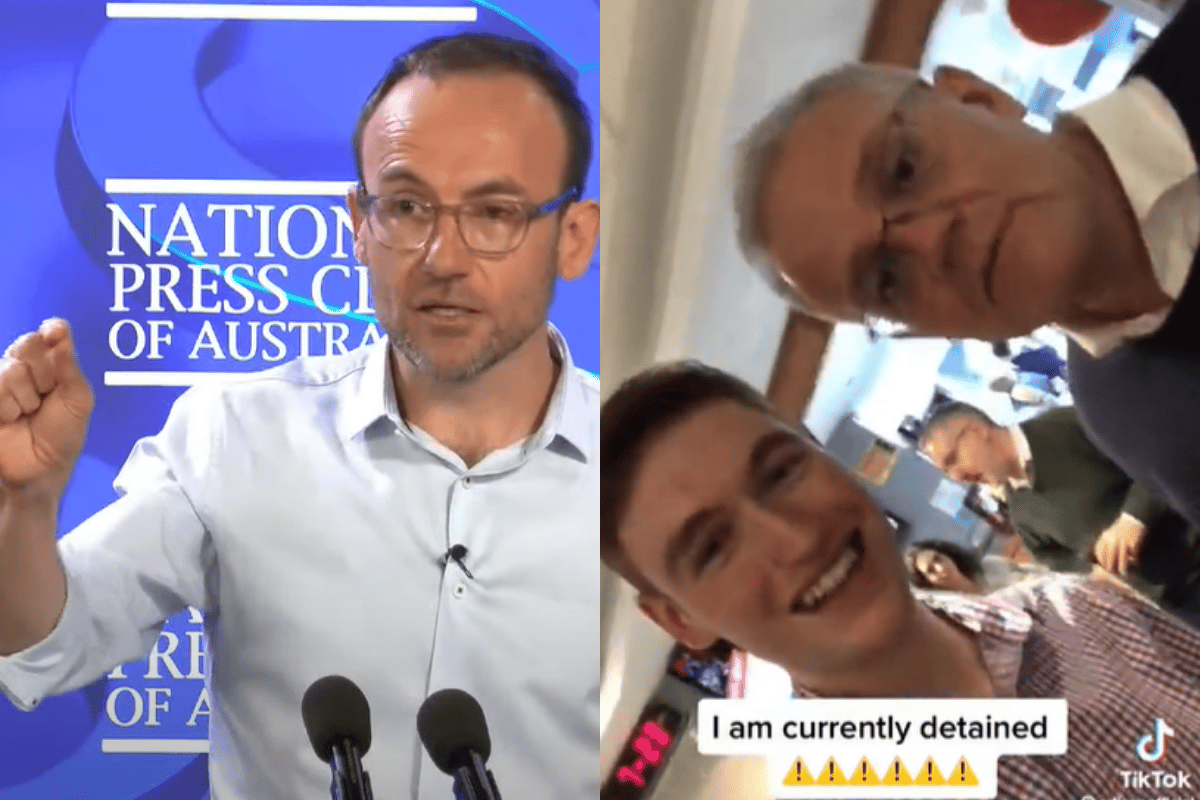 We're officially one week into the federal election campaign and it's been pretty... eventful to say the least.

But despite the rocky start, the prime minister and opposition leader have announced a host of promises if they claim victory in the polls.

While both leaders are currently taking a brief break for Good Friday, they're expected to resume the campaign trail on Saturday ahead of Easter.

To help keep you on track with the campaign, here are six of the biggest moments from the first week.

1. Anthony Albanese had an early gaffe.

The week didn't start out too strong for Opposition Leader Anthony Albanese after he admitted he didn't know the Reserve Bank of Australia’s official cash rate or the unemployment rate.

When asked by a reporter at a press conference in Tasmania, Albanese couldn't recall the official cash rate, which has sat at 0.10 per cent since November 2020.

He later stumbled on the unemployment rate, which sits at four per cent.

"The national unemployment rate at the moment is… I think it's 5.4… sorry. I'm not sure what it is," he told reporters.

Albanese later apologised for the mistake that day.

"Earlier today I made a mistake. I’m human. But when I make a mistake, I’ll fess up to it, and I’ll set about correcting that mistake," he said. "I won’t blame someone else, I’ll accept responsibility. That’s what leaders do."

‘Earlier today, I made a mistake. I’m human - but when I make a mistake, I’ll fess up to it’ - Opposition leader ⁦@AlboMP⁩ has addressed his earlier stumble, when he couldn’t say the cash rate or unemployment rate #auspol ⁦@9NewsAUS⁩ #ausvotes pic.twitter.com/DS1RiPfzGQ

The next day he told reporters he was going to "shake it off", channelling his inner Taylor Swift.

"I fessed up, I took responsibility. That is what I will do... Here is a Taylor Swift comment for you. My theory is: 'Shake it off'".

2. Scott Morrison was confronted by an angry activist.

Scott Morrison also had a bumpy start to the campaign trail when he was confronted by an angry activist at a private event on Tuesday night.

During a function for journalists at Western Sydney's Nepean Rowing Club, Adisen Wright, who describes himself on social media as a "progressive activist" and is listed online as a Young Labor member, filmed himself approaching the prime minister.

In a video shared on TikTok, Morrison asked Wright whether he was with the "press pack", to which he responded, "No, I am a local, I live up in the [Blue] mountains".

After spotting the camera, Morrison asked "What's going on there? Why is it recording?" and told Wright it is a private event.

"Scomo, across the river here, across the Nepean River, people lost their houses and they were burned. You're a disgrace - you are a disgrace," Wright yelled before a security officer followed him outside and asked for identification.

WATCH: A Labor activist has ambushed the Prime Minister at a private election campaign event in Western Sydney, calling him a "disgrace". #9Today pic.twitter.com/NLx75X6rAO

Police confirmed they were called to a licensed premise at Penrith and issued a 20-year-old man with a direction to move on.

It wasn't the first time Morrison has been confronted this month. Just last week, he was heckled by a pensioner in front of a huge pack of media during a pre-election visit to a tavern in the NSW Hunter region.

Greens Leader Adam Bandt proved he isn't tolerating 'gotcha' questioning, when he hit back at a journalist's question on Wednesday.

During question time after his National Press Club address, Bandt was asked by a journalist from the Australian Financial Review about the wage price index (WPI).

"Google it, mate," Bandt replied. "If you want to know why people are turning off politics, it’s because of what happens when you have an election that increasingly becomes this basic fact-checking exercise between a government that deserves to be turfed out and an opposition that’s got no vision. This is what happens."

"Those questions are designed to show that politicians are somehow out of touch and not representative of everyday people," he continued.

"Well news flash: most of the people in Canberra are on six-figure salaries, just passing time until they go out and work for the coal or gas corporations and go and get a six or seven-figure lobbying job. Do you know what would be a better way of showing that politicians are in touch with everyday people?

Greens Leader Adam Bandt has rebuked a journalist's 'gotcha' question on a wage statistic by bluntly telling him: "Google it, mate".

Bandt, speaking at the #NPC, was asked whether he knew the current Wage Price Index in an apparent attempt to throw him off. #ausvotes #auspol pic.twitter.com/KJBC7qSJu1

During the week we heard big promises from the major parties, with a particular focus on healthcare and jobs.

Morrison began the week by announcing a $40 million election commitment, prioritising road upgrades that improve safety and address maintenance backlogs. He's also promised to create 1.3 million new jobs in the next five years and a $220 million package for the forestry industry.

Albanese, on the other hand, focused on healthcare during the first week of the campaign. He promised better care for children with hearing loss, Medicare support for regional patients, and a $135 million to trial 50 new urgent care clinics across Australia to ease pressure on hospitals.

The Greens are also pushing for better healthcare, with Bandt announcing more than $77 billion worth of dental care will be covered by Medicare if the Greens hold the balance of power after the election.

5. Scott Morrison cancelled an event after his security were involved in a car crash.

On Thursday, the prime minister cancelled a planned speech at a defence conference in Tasmania after his security detail were involved in a car crash.

Four federal and local police members were in a car following Morrison when it rolled near Elizabeth Town in northern Tasmania.

All four officers were taken to hospital with "non-life threatening injuries".

"Our police do an amazing job in keeping us all safe. I am incredibly grateful to all the police who look after me and my family," Morrison wrote on Facebook.

On Friday, he said two of the four police officers had been discharged from hospital and said the incident was a reminder for people to stay safe on the roads.

"If you are travelling [this Easter] around of course, please be safe, be careful."

Morrison has come under fire this week for going back on a key 2019 election promise to establish a national integrity commission.

The national body was a key campaign pledge at the last election, but the bill was not introduced to parliament in the past term, with the prime minister arguing it didn't have enough support to pass.

Speaking to reporters on Thursday, Morrison rejected suggestions that his lack of support for establishing the commission was to protect senior members of the government.

"I have seen the lives destroyed by a commission such as that, which becomes a kangaroo court, and goes around and seems to operate through politics and shaming people," he told reporters in Launceston. "I have seen the damage that causes, I don't want to see something of that nature."

However, Albanese said the lack of an integrity commission highlighted the government's failed election commitment.

"[Scott Morrison] made it clear that he wouldn't have a national integrity commission during the next term with this rather bizarre statement that the reason was because Labor didn't support his model," he told reporters.

"The reason why this prime minister doesn't want an anti-corruption commission is sitting on his frontbench."