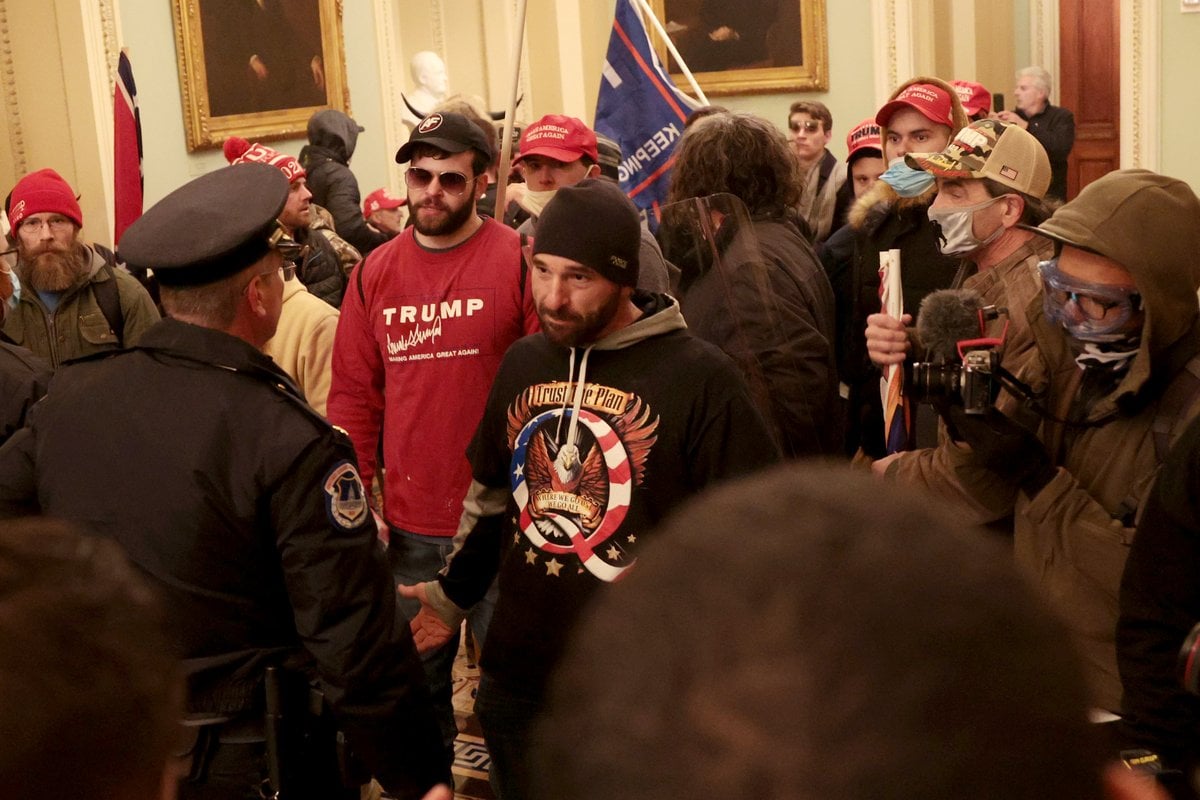 On Wednesday afternoon, US time, dozens of pro-Trump protestors stormed the Capitol building in Washington D.C. to halt Congress from formally confirming Democrat Joe Biden as the next president.

They marched toward the barricades circling the building, knocked them over and bashed through the doors.

Once inside, some cleared their path by engaging in hand-to-hand combat with security and Capitol Police.

A handful even managed to enter the Senate chamber. One stole a lectern. Others sat in the chairs of congressional leaders, smiled and took photographs.

Meanwhile, security stood at the doors of the House of Representatives, guns pointed toward the door, protecting the members of Congress within. The representatives were ordered to collect gas masks and shield behind their seats.

For the first time in history, the US Capitol was under siege by its own citizens. A pro-Trump protester carries the lectern of U.S. Speaker of the House Nancy Pelosi through the Roturnda of the U.S. Capitol Building. Image: Getty.

Yet hours later, when this mob left the building — the seat of American democracy which they had just unlawfully breached and sieged — most did so unshackled.

There were no handcuffs, no chokeholds, no officers dragging them out and into waiting police vans.

In fact, footage posted to Twitter shows the door was even held open for some.

A group of anarchists strolled outside, some of whom were heralding their disruption of the vote and vowing to return. Then they simply dispersed, absorbed back into the crowd.

One was carrying what appears to be a large knife on his belt.

The police politely holding the doors open for insurrectionists leaving the Capitol building they invaded is actually pretty gutting. Just a reminder of who are considered citizens in America and that Black people were never meant to be considered so. https://t.co/3qQtJtCaMX

I spoke with Jake Angeli, the QAnon guy who got inside the Senate chamber. He said police eventually gave up trying to stop him and other Trump supporters, and let them in. After a while, he said police politely asked him to leave and let him go without arrest

This mob was seeking to disrupt the formal count of the electoral college votes, which are in favour of Democrat Joe Biden 306-232.

Yet as it stands, just 13 people were arrested.

Overwhelmed police used pepper spray at the barricades in an attempt to hold them back. Inside the Capitol, a woman was shot and killed. The circumstances of her are still under investigation, though it's been widely reported the woman was a civilian involved in the siege.

A lot is still unclear about precisely how the chaos was able to unfold.

And they were faced with a mob that was entirely fearless.

"White Americans are never afraid of the cops, even when they're committing insurrection, even when they are engaged in attempting to occupy the Capitol.

Watch: CNN's Van Jones urges his Republican friends to ask themselves an important question about the Capitol siege.

"In their minds, they own this country, they own that Capitol, they own the cops, the cops work for them, and people like me have no damn right to try to elect a president.

"When you think you own the place, you ain't afraid of the police because the police are you."

Indeed, the contrast to the response to the 2020 Black Lives Matter protests is stark.

Then, authorities were well equipped to halt the thousands of Americans taking to the streets following the death in the custody of Black Minneapolis man George Floyd. Then, they were prepared.

Between June and August, several peaceful BLM protests were met by deep walls of armed military and police, even armoured vehicles. 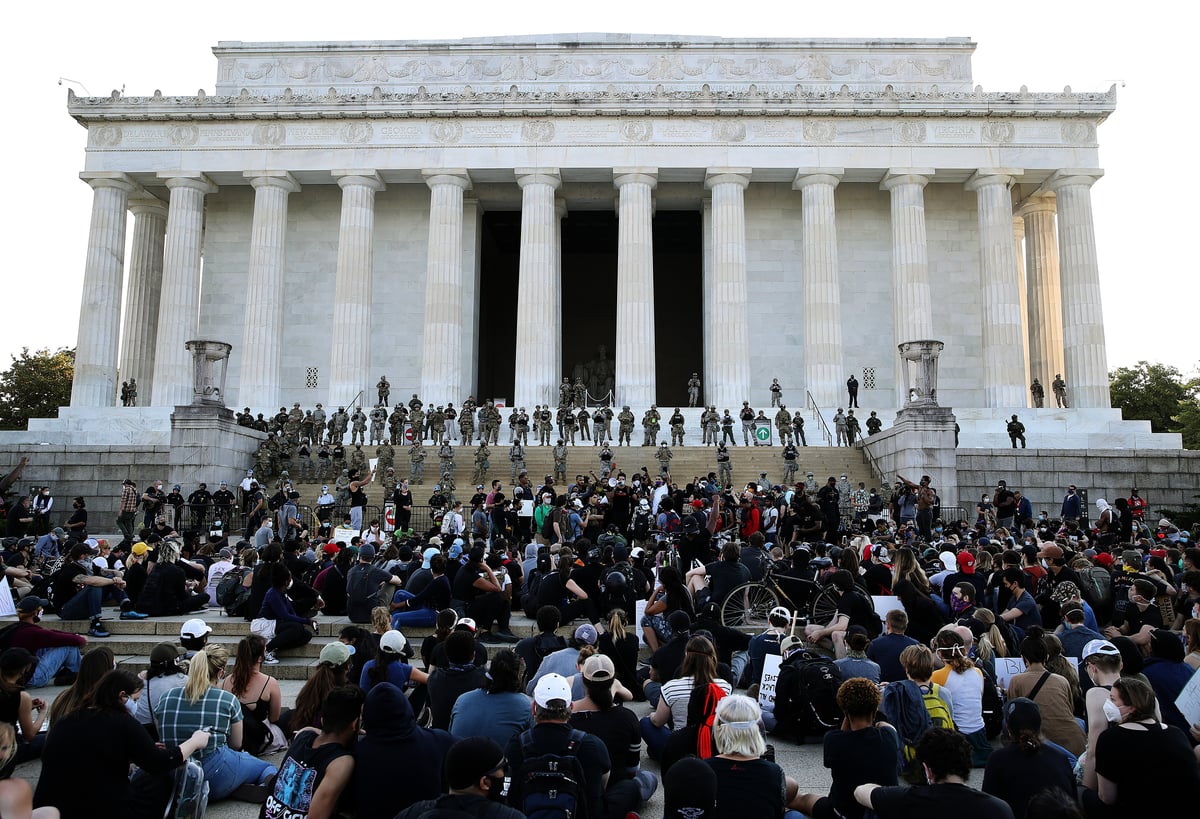 Protestors and journalists were knocked to the ground, fired upon with rubber bullets, tear gas and flash grenades. Thousands were arrested across the country.

An Amnesty International investigation found dozens of examples of excessive and unlawful use of force by authorities during those protests.

Yet today, it seems that authorities in Washington D.C. showed relative restraint when dealing with those who stormed the Capitol.

If only that were a sign that something has changed in policing in the US.

Instead, the fact that this group of protestors toppled the meagre wall laid in their path, that they caused terror and then walked away largely unwounded and unpunished, is yet more proof that nothing has changed at all.

Reply
Upvote
1 upvotes
My god. Over 30 people were killed during the "peaceful" BLM and anti-Trump protests last year. Dozens of building were burnt down, businesses looted and the protesters even took over large parts of downtown Seattle.

Reply
Upvote
2 upvotes
It is a relief that only one person was shot during that coup attempt by Trump ams his supporters. However there is no doubt that if these were BLM protesters there would have been more than 13 arrests and that the number of the dead would have risen by a few dozen.
News
General
Opinion
True Crime
Politics
Sport
Explainer
Entertainment
Celebrity
Reality TV
Movies
TV
Books
Rogue
Royal
Lifestyle
Beauty
Fashion
Weddings
Home
Wellness
Health
Fitness
Travel
Food
Parents
Before The Bump
Pregnancy
Baby
Kids
Teens
School
Parent Opinion
Work & Money
Money
Finance
Career
Lady Startup
Relationships
Sex
Dating
Separation
Friendship
Family
Real Life
Couples