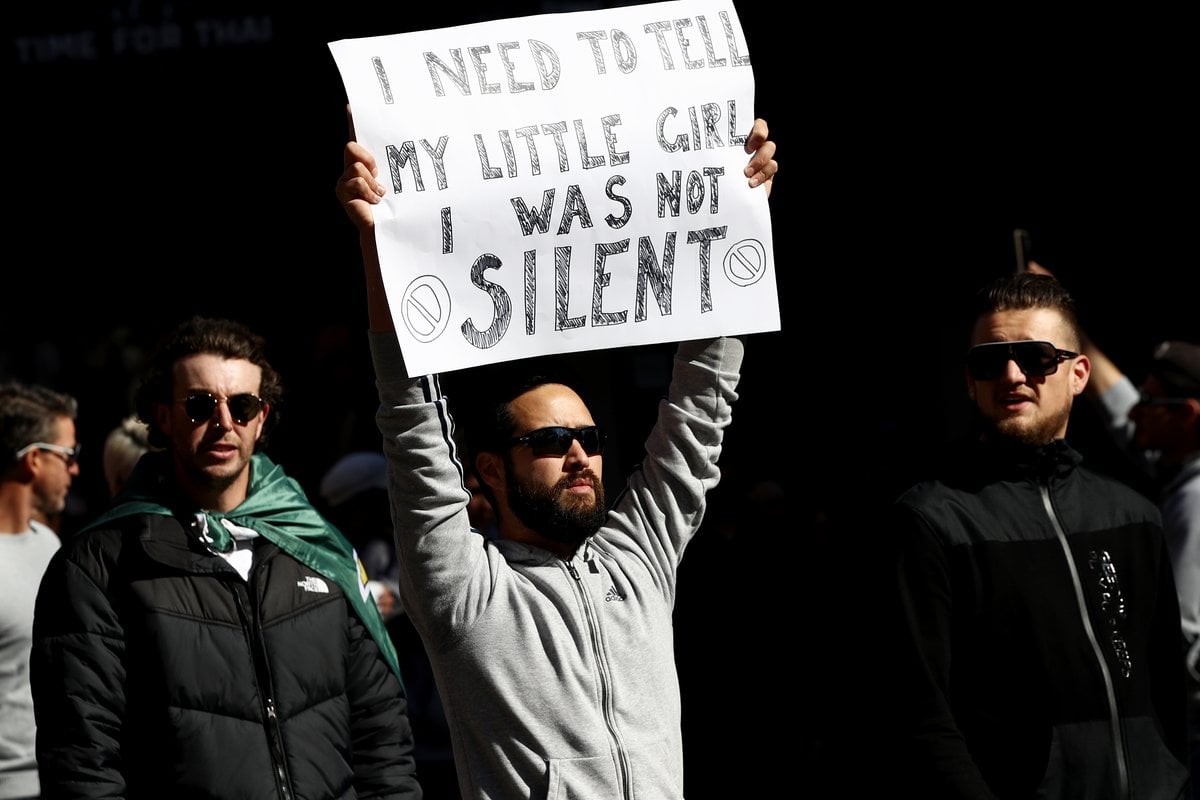 To explain any historical event by dismissing one group of people as 'selfish halfwits' would be lazy.

Last weekend, thousands of Australians marched the streets of their capital city. In most of those cities, Sydney, Melbourne and Adelaide, this was despite strict stay at home orders implemented to curb the spread of COVID-19.

Compliant Australians watched these so-called 'freedom rallies' unfold from inside their homes. They thought about the sacrifices they've made. The empty funerals. The cancelled events. The kids who can't learn from classrooms and the businesses who are barely staying afloat.

For a small group to put their 'freedom' above our safety and promulgate - let's call them what they are - dangerous conspiracy theories, and likely wind back the lockdown clock. While the protestors might not get tested for COVID-19, they have every chance of passing it onto vulnerable family members and to the broader community.

In Sydney, protestors wouldn't have had to walk much further to pass by Royal Prince Alfred Hospital, where a 38-year-old woman lay dying of COVID-19. The virus some of them believe doesn't exist claimed her life a few hours later.

What I mean to say is that our anger makes sense.

But calling them all stupid?

If only it were that simple.

While we were looking at a press photo of a (white) man allegedly assaulting a horse, we were ignoring the faces in the background. 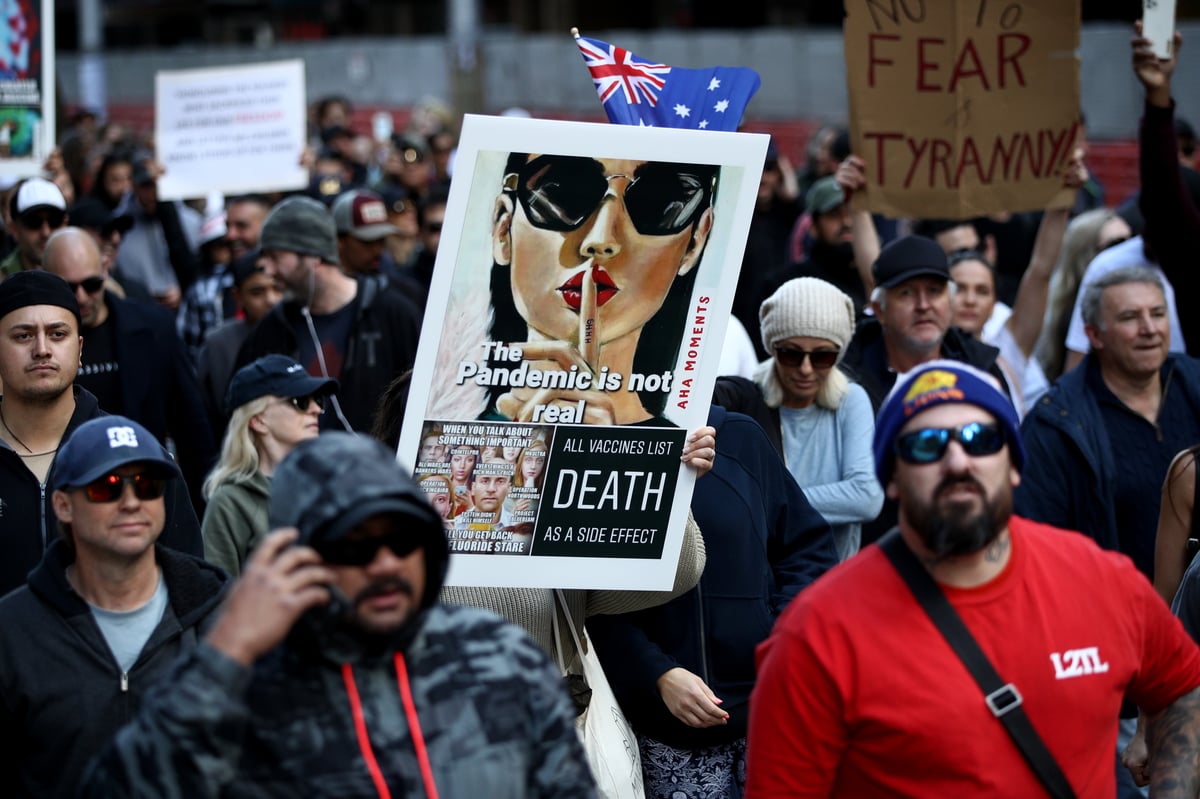 Protestors in Sydney. Image via Getty.

The protests were notably multicultural.

Josh Roose, a senior research fellow specialising in extremism at Deakin University, says the multiculturalism of these protests is what distinguishes this movement from others.

"In both Melbourne and Sydney the people and areas being represented are the areas that have been hit particularly hard by the pandemic," he told The Guardian. "There’s also issues here with the cultures and communities often have a deep-seated distrust of government, often for good reason."

PHD candidate and University of Queensland Global Change scholar Bernadette Hyland-Wood says that what we have to be most wary of is "lumping people together in one group".

Just as a climate change rally might include a melting pot of people from all sides of politics, so too were the freedom rallies complicated.

Some were anti-vaxx. Others were anti lockdown. A fringe don't believe COVID-19 exists at all.

The signs tell us, "I fear government more than COVID-19" and "This is not about a virus it's about total government control."

For people who might be from Lebanon, or Vietnam, or Iraq, this doesn't feel like a conspiracy theory. It looks like their family history. A grandmother who went to withdraw money one day and all of it was gone. A grandfather whose government sent him to war and he never came home.

Nick* might've considered going to the protests on Saturday.

I spoke to his girlfriend Joanna* who feels like a full-time fact checker, challenging the WhatsApp messages he receives daily. 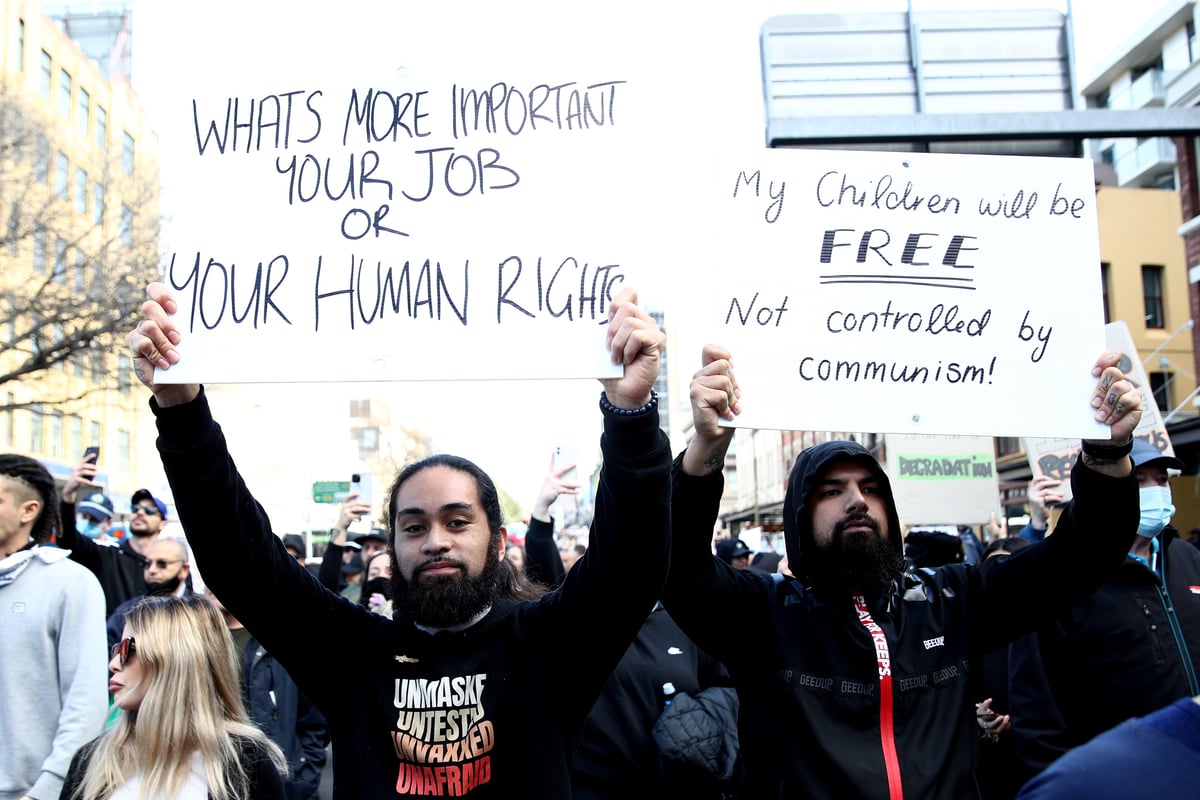 Nick's parents immigrated here from Lebanon and grew up in Western Sydney. His extended family live in Fairfield, which is at the centre of New South Wales' current COVID cluster.

He doesn't trust the government, because his family taught him not to. From the Civil War which killed more than 120,000 people, to political corruption, to police accused of abusing human rights, his trust in powerful institutions has entirely eroded.

Growing up, Nick tells Joanna that police looked at him differently. While she might get a slap on the wrist for driving an unregistered vehicle, he will walk away in handcuffs.

When his brother was the victim of a coward punch incident 18 years ago, the family felt let down by the subsequent police investigation and Australia's court system.

The offender was eventually charged, but only sent to jail for two months. His brother ended up in a coma, and nearly two decades later, lives with a brain injury that impacts his ability to work.

Rumours circulate in his WhatsApp groups that in Fairfield, they're about to separate families. That the police - who keep knocking on their doors - aren't to be trusted.

Every piece of research on conspiracy theorists will tell you the same thing.

Who are most at risk of falling for them? The oppressed.

Conspiracy theories can be a desperate attempt to understand the circumstances one finds themselves in. Say, someone who has lost their job and is struggling to support their family. Maybe English isn't their first language, or their literacy isn't strong, and they don't know how to navigate Centrelink. They were just making ends meet before the pandemic, earning minimum wage, and now this.

"And the worse these actual circumstances are," van Prooijen says, "the more the need people feel to come up with good explanations and the more likely people are to blame their circumstances on powerful groups."

Social class and access to education also negatively predict an individual's belief in conspiracy theories. Clutching at stories, where powerful people are lying to them, helps confirm their suspicion that the odds are stacked against them.

So, imagine your family is well acquainted with corrupt governments.

Imagine you then went to an under-funded public school.

Imagine you're earning minimum wage, working long hours, and now you're looking down the barrel at another month of unemployment.

Imagine you've always felt like the police are targeting you. 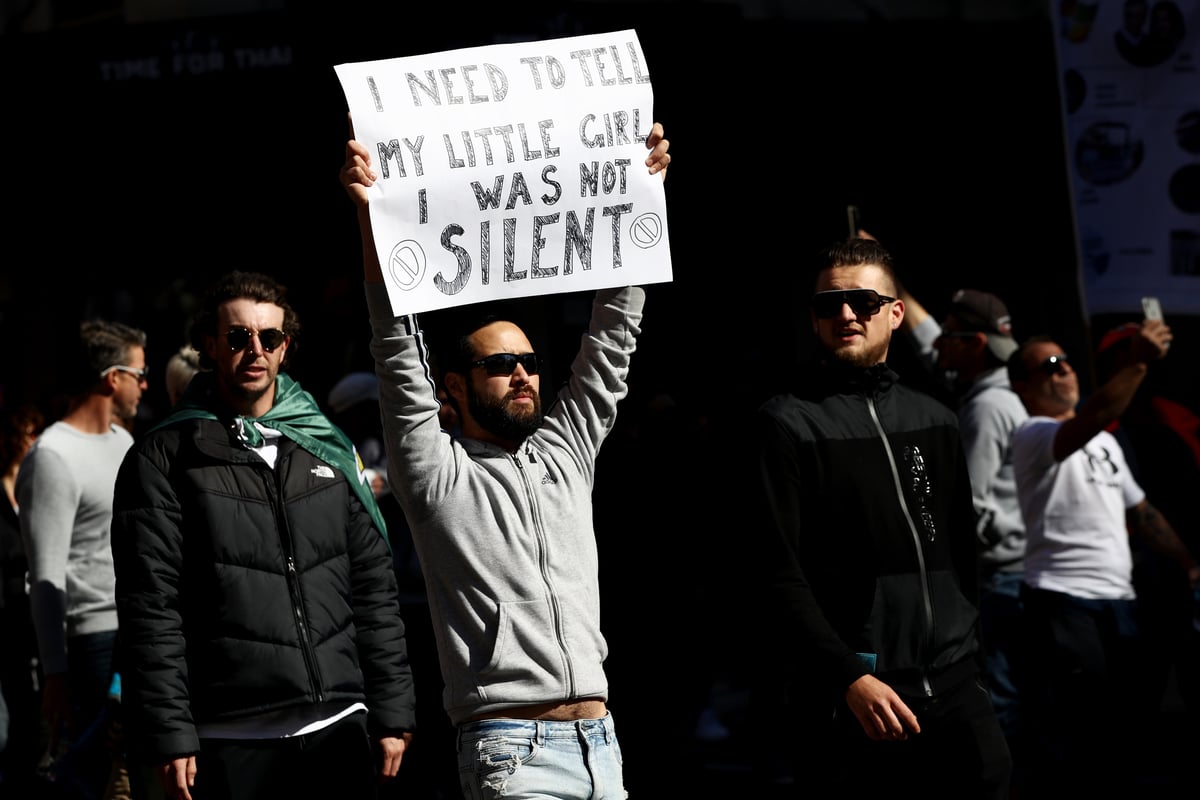 Imagine, as stand up comedian Fergus Neal astutely pointed out, you've been fed propaganda by the Murdoch press for the last 18 months, that called a Premier who locked down his state "Dictator Dan".

Imagine a protest in the middle of a global pandemic being the only way you knew how to say: "I can't do this anymore."

What if instead of asking these protestors what's wrong with them, we asked what's happening to them?

And if we approached behaviour we didn't understand with curiosity and compassion rather than fury?

Of course, there are hundreds of thousands of Australians suffering who would never attend a protest, and who are able to distinguish fact from fiction.

But when one man held a sign at the Sydney protest that read "The system is failing", maybe he was right.

These protests - the scale of them - suggests it is.

These are the people Australia let down.

Not all of them.

But certainly some of them.

* Names were changed to protect anonymity.

Reply
Upvote
9 upvotes
Hey Jessie, I think there’s a significant population in this crowd you have missed who are not from disadvantaged backgrounds. My sister, who attended last Saturday’s protests, is private school educated, very wealthy and lives on the northern beaches. There’s a huge group like her who work in the wellbeing industry and consider themselves intellectuals and libertarians . They feed from a misinformation firehouse and have been completely indoctrinated. Would love your thoughts on what we do about this growing, very alarming issue. It makes me equally very angry and sad. I miss my sister.

Reply
Upvote
@georgiew Can we assume a connection to what you refer to the 'well being industry' and the woo woo industry?

Reply
Upvote
3 upvotes
@random dude They are one and the same thing.

Reply
Upvote
2 upvotes
@random dude I’ve no objection to you using woo woo :-) Wellbeing or wellness industry is term they use to legitimatise their alternative health practises