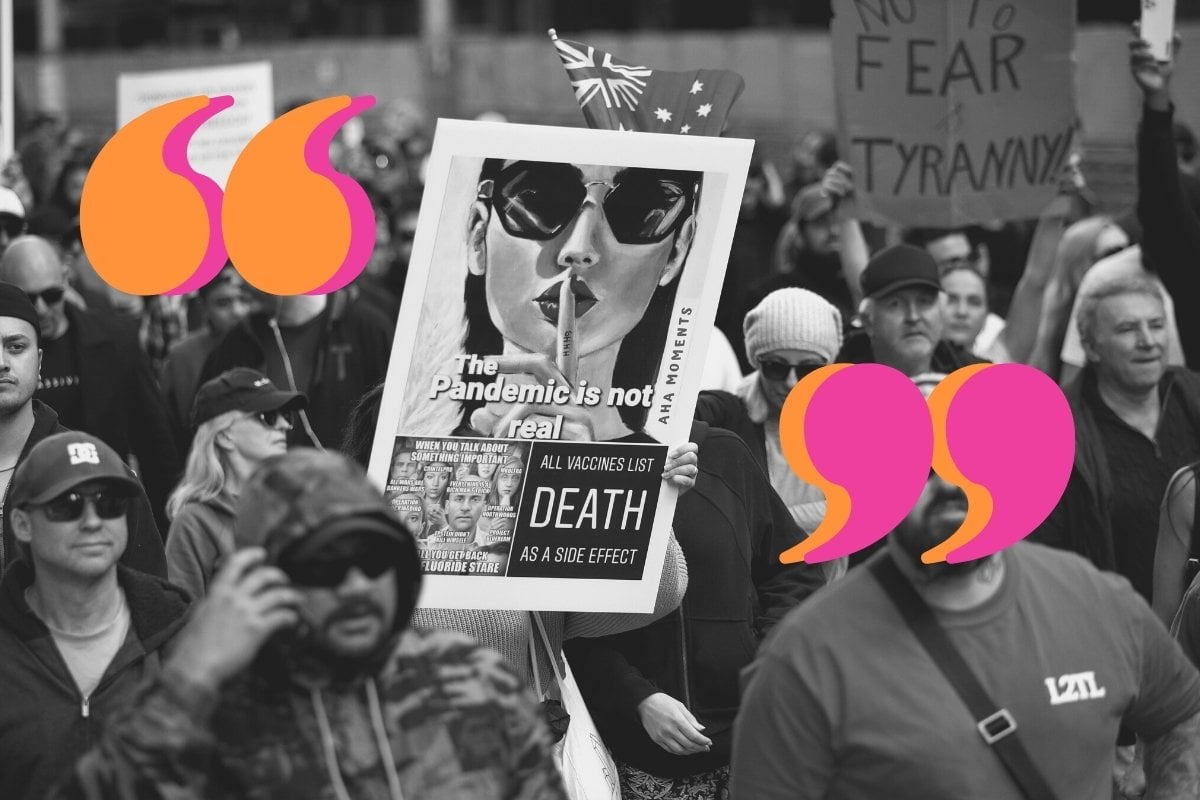 On Saturday, thousands of Australians marched in protest against public health orders designed to curb the spread of COVID-19.

The two largest gatherings were in Sydney and Melbourne, cities that were then both under stay-at-home orders amid clusters of the Delta strain of the virus.

While millions of the cities' residents remained indoors or socially distanced, the passionate groups illegally crowded into their respective CBDs as part of a 'Worldwide Rally for Freedom'.

While their motivations for marching varied, it was clear that a significant proportion of those present don't believe what science tells us about the threat of the virus.

They were willing to group together in large numbers, few were wearing masks, and many carried signs and banners pointing to major conspiracy theories about the motivation of vaccines and lockdowns. Many seemingly denied the existence of the virus itself. 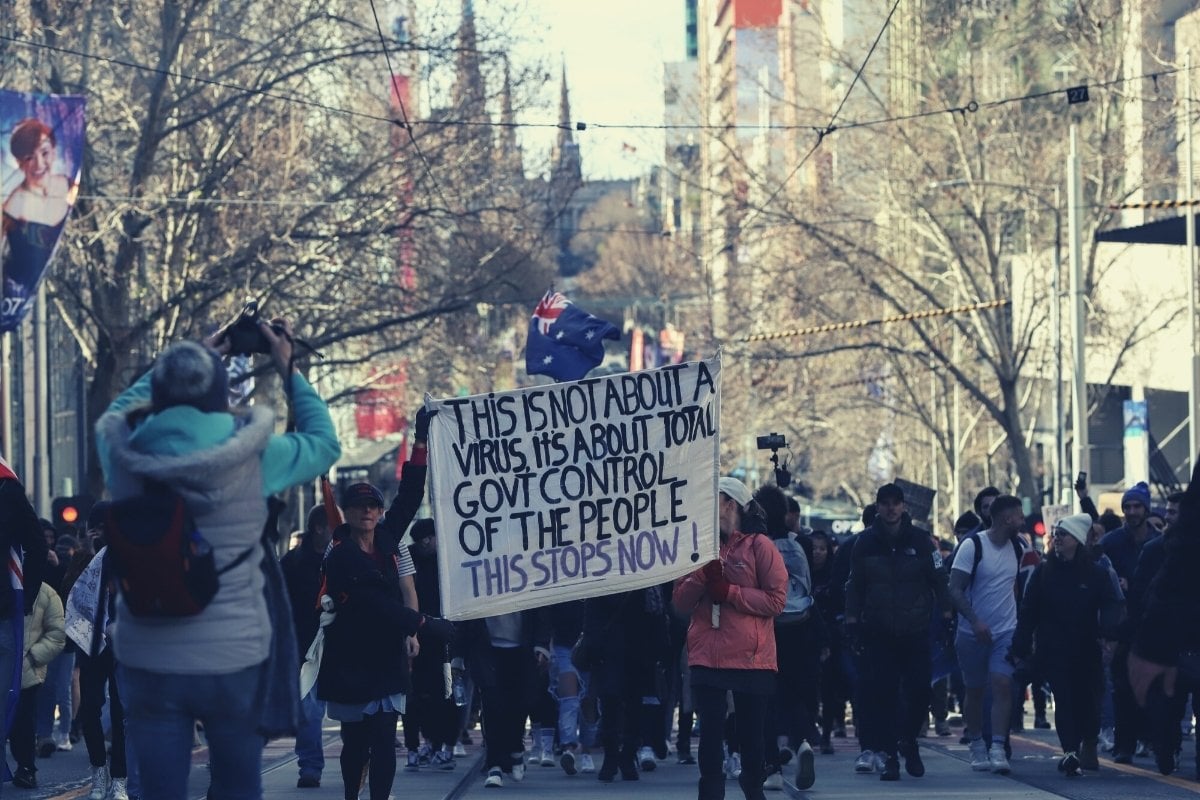 More of these so-dubbed "freedom" marches are planned for this coming weekend. That's despite an ongoing police operation to identify those present at Saturday's event and the promise of a strong police presence and more arrests.

For friends and loved ones of those intending to return or join, it's an alarming prospect.

Not only is there the health threat of them joining a large crowd (and the fact that attendees aren't likely to get tested should they come down with COVID-19 symptoms), there's the chance of them being arrested, the possible displays of violence, the thought of their faces being plastered across social media and news outlets around the world.

Here's what experts have to say.

How to engage with someone who doubts the threat of COVID-19.

If you're looking for a magic line or argument that will help them abandon their conspiratorial thinking, unfortunately, there isn't one. It is extremely difficult to change the mind of a conspiracy theorist.

But if you choose to engage, there are few things to keep in mind to ensure you have the best possible chance of being heard.

Consider why they feel this way.

As Dr Darren Saunders, Associate Professor of Medical Sciences at the University of NSW previously told Mamamia, "People want to believe these conspiracy theories largely out of fear and distrust. So a good place to start is to understand people's motivations and where they're coming from in buying in to these ideas."

At the centre of it all is typically the need to achieve a sense of structure and control.

"People are more vulnerable to conspiracy theories when they feel anxious, when they feel threatened, and when they feel out of control. And that's exactly the kind of conditions you get during a pandemic," Dr John Cook, cognitive scientist at George Mason University and the co-author of The Conspiracy Theory Handbook, previously told Mamamia.

"When we feel out of control, conspiracy theories, ironically, help us to feel more in control. It's more comforting to think of someone in control of this situation — even if that's someone who's an evil conspirator — compared to randomness."

Presenting someone who believes in conspiracy theories with facts and evidence is fruitless.

"A trait of conspiratorial thinking is immunity to evidence," Dr Cook said.

"Any evidence, any information you give them that contradicts their theory, they typically react by assuming that evidence is part of the conspiracy. Or if there's no evidence for the conspiracy, they interpret that as proof that the conspirators did a good job hiding their tracks."

Listen: What do those who rallied at these protests really believe, and why? Mamamia OutLoud discusses. (Post continues below.)

Be prepared for emotional escalation.

As Senior Lecturer in Psychology at The Open University, Jovan Byford, wrote for The Conversation, the stories behind conspiracy theories are "about good and evil, as much as about what is true."

Consider the common arguments posed by people who are against vaccination: they argue that large companies and governments are knowingly harming people, in particular, babies and children. Likewise, many believers in the 'QAnon' conspiracy are convinced that lockdowns are means for a secret global cabal of pedophiles to cover up and perpetuate their activities.

These beliefs have a strong emotional dimension, and that's what can be so seductive about them. But be aware that this means tempers can flare when they're challenged.

"Conversations turn into a shouting match. It is important to prevent this from happening," Byford wrote. "Be prepared to de-escalate the situation and keep the dialogue going, without necessarily giving ground."

Ridicule is not going to help.

Never question their morality or intelligence.

"They will put up a brick wall immediately. So approach the conversation with empathy; try to understand where they're coming from," Dr Cook said.

According to Dr Cook, a good approach here is appealing to a common value of research and critical thinking.

"Conspiracy theorists like to see themselves as critical thinkers, because they're not gullible they haven't been taken in by the official account," he said. "So try to encourage them to apply their critical thinking to their own arguments and whether the evidence fits their conspiracy theory. It's a long shot, but it's one constructive way to have a conversation."

Be realistic about the outcome.

It's important to remember that you're unlikely to change their mind in one conversation — or 10, or 20.

"The aim of talking to conspiracy theorists is not to convert them, but to sow doubt about an argument, and hopefully enable them to gradually build up resistance to its seductive appeal," Byford wrote.

If you choose to engage, repeatedly hitting that brick wall between you and your loved one can cause a lot of stress and hurt. Look out for yourself and disengage if you need to.

Even Dr Cook said he only engages "if I think that something positive can come out of the conversation. And that positive thing isn't necessarily changing that person's mind; it can be for the benefit of other people."

In other words, keep sharing credible information, keep talking to your other friends and loved ones about official data. It's the most effective thing you can do to stop misinformation spreading further.