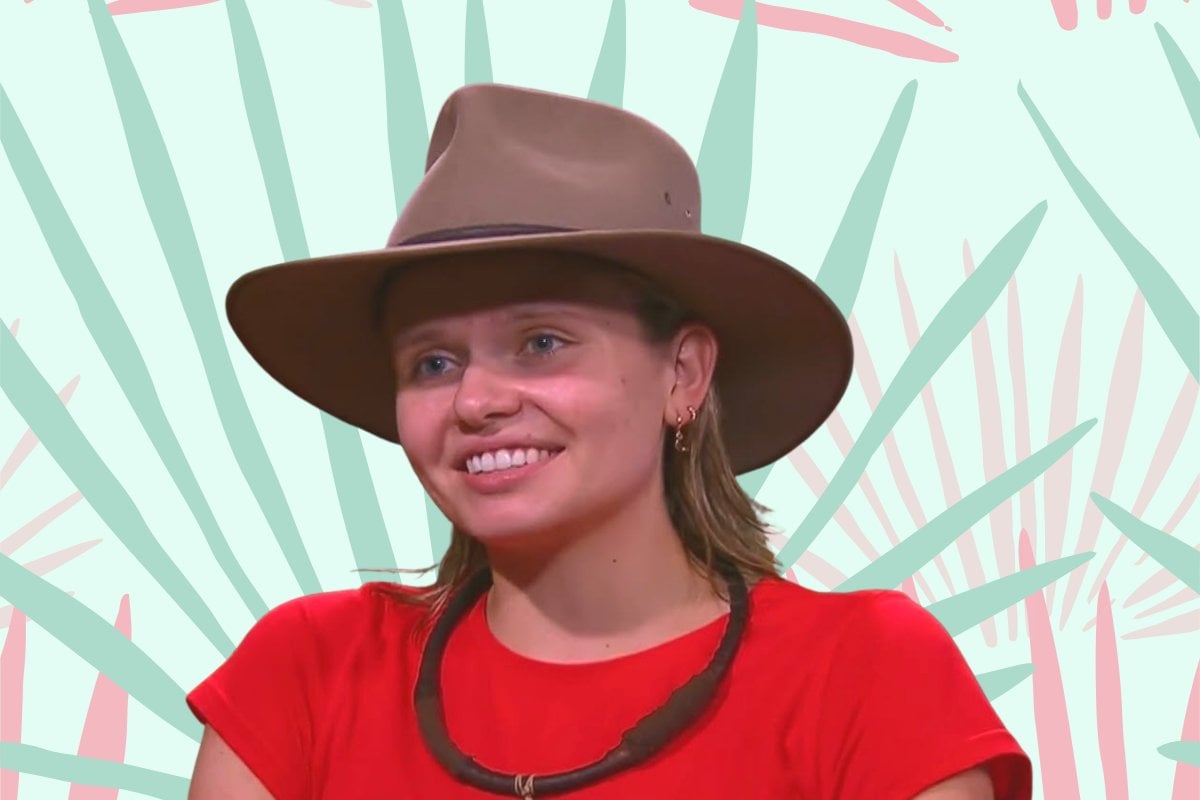 The I'm a Celebrity... Get Me Out of Here! cast are filmed 24/7 in their small campsite, so it's difficult to keep secrets.

But it's not impossible, as evicted campmate Alli Simpson discovered while watching back the show.

The model and singer (who is also the sister of The Masked Singer winner and Miley Cyrus' ex, Cody Simpson) entered the show as an intruder and immediately caused a stir amongst her fellow camp mates - although she had no idea about it at the time.

Speaking to Mamamia, Alli said she was shocked to discover that she was in a supposed 'love triangle' with Abbie Chatfield and Ash Williams.

"That was literally the only thing that really shocked me. I honestly had no idea."

A quick recap: Alli arrived in camp the day after Abbie spent time with Ash overnight. The 38-year-old then told the other men he regretted spending time with Abbie, because he'd rather hit on Alli.

He said Alli arrived "one day too late", with him and a number of the other men in camp discussing what a difficult situation he now found himself in.

Of course, this was all without even knowing if Alli - who is 22 and in a relationship - was interested (she... wasn't).

"I was watching it back laughing so hard at the boys talking about Ash and I in that way," she said.

"I was just sitting there like, 'I was oblivious to this whole situation' so that was really classic."

Alli said she had been nervous to arrive in camp late and it took her a few emotional days to find her groove.

"I was definitely nervous going in because I went in about eight days in [to filming] and I knew there were a couple of groups formed, but everyone made me feel so welcome," she recalled.

"Two days in I had a bit of a meltdown because I was missing my family and friends... [The rest of the cast] remembered how they felt on the third day and they all came up to me and made sure I was okay. It was really amazing, we just became one big family."

She said the first few days were definitely the hardest, but once she pushed through she was surprised by how well she adapted to life in camp.

"I think everybody sort of felt the day two, day three blues a bit. You're detoxing from the outside world, you're not eating your regular diet, you're not having coffee or sugar or carbs or alcohol.

"I think a lot of us felt like we were detoxing for the first two-three days and you were sort of in the mentally of 'am I going to be able to get through this?' but I think having everyone there as a support system, we all understood it and got each other through it which was really nice.

"Once you're about a week in, you're really in a routine. You knew what you were eating for breakfast, lunch and dinner. You knew you'd get up and have a shower and a swim. You really had to make it feel like home because otherwise it would've been too difficult."

Alli has major phobias of cockroaches, spiders and other insects. So much so, her family - especially older brother Cody - were shocked to see her tackle her fears in the show's trials.

"When I initially told Cody he didn't actually believe that I was going on the show... He was just like, 'there's no way, you're not going to be able to do it' and I genuinely went in with that mentality too.

"But I guess when you're in there and you're doing the trials knowing you've got to bring food back to camp, you just find this new strength and this new determination to succeed."

Alli and her family are a tight-knit bunch, but time in camp and having Cody remain in Los Angeles throughout the COVID-19 pandemic has meant more time apart recently.

"It's definitely been tough, and especially because Cody's still in the States," Alli told Mamamia.

"I was able to go see him in March right before the peak of COVID, so I got to spend a bit of time with him then but he hasn't been home. Mum and Dad and my younger brother, we're all missing him a lot.

"And obviously spending time away from them while on the show, it is difficult when we're apart because we are a really close, tight-knit family. I talk to them pretty much 24/7 so it was definitely something I'm not used to, and I struggled with that on the show but hopefully in the future we can start travelling more and Cody can come home soon."

Now out of the jungle, Alli said she has learned a lot about herself from the show. She's still terrified of spiders, but there were other takeaways.

"It was transformative to say the least. I think coming out of it, I'm a lot stronger than I thought I was. I went into it with an open mind and I really wanted to give it my best crack, but there was still an element of being terrified that I was going to say 'I'm a celebrity, get me out of here' and I wasn't going to be able to do the trials that I did," she said.

"You just kind of find this new strength especially when you're in the trials and in the moment. You're sort of at your breaking point. I was having full-blown panic attacks... I haven't ever been in a position where I push myself to breaking point like that and knowing I can get through it, I think I can apply that to other parts of my life now. I'm definitely a lot stronger."