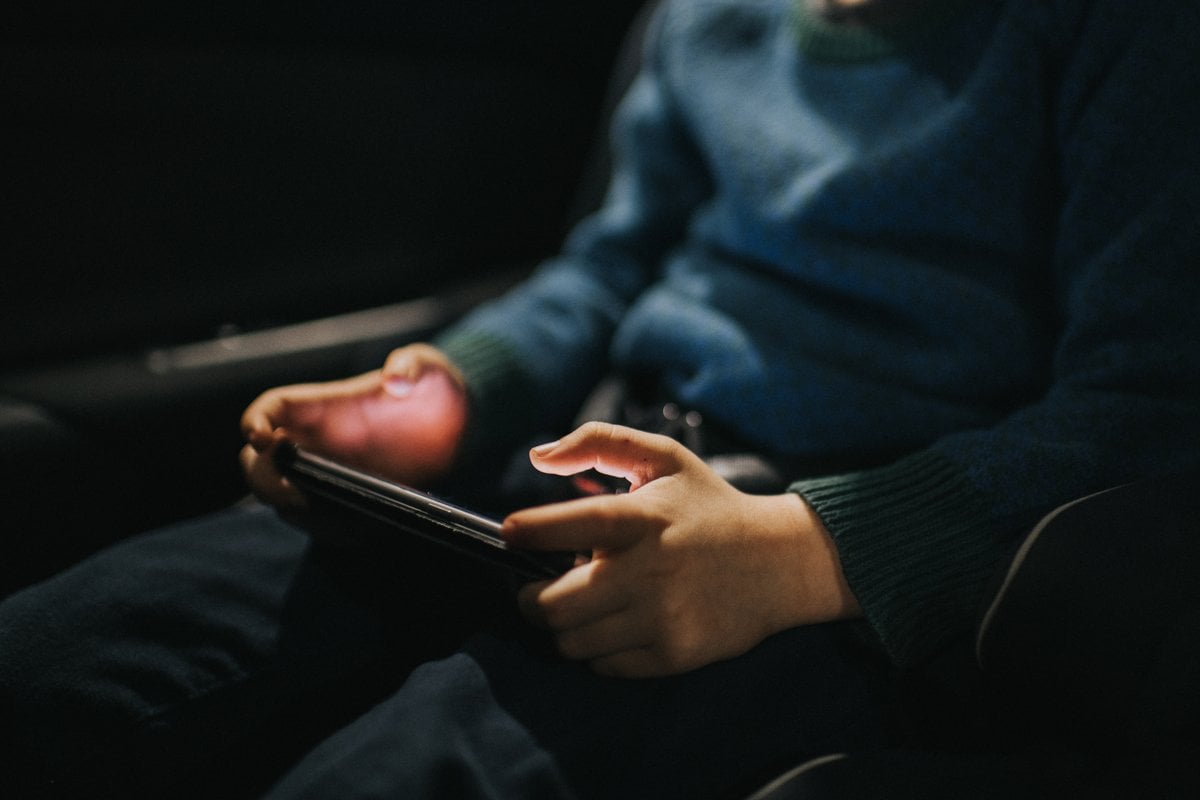 A girl in a bikini, tanned, large breasts, staring seductively into the camera.

A woman peeking over her shoulder wearing a g-string.

A close up of a woman’s arse.

Photo after photo. All women. All in various states of undress.

My stomach knotted. My throat dried up. It was not the images that stunned me.

It was where I found them.

On my son's iPad.

Watch: Do your kids need a screen intervention? Post continues after video...

My first thought was, "how did I let this happen?"

I thought I had done all the right things. My son has incredibly strict rules in place with devices. No internet access. No YouTube. No TikTok.

No one else has access to his iPad. We don’t share things across devices. No other kids play on it. He only has apps and games I approve.

I followed the guidelines. I read the articles. I listened to the experts. I thought I had done it all.

When Victoria went into lockdown and we were forced into remote learning, I had to unlock the internet restrictions.

At the end of the school week, after trying to entertain three children and a toddler, I was exhausted and at the end of my rope. This was when I realised I had forgotten to put the restrictions back on the iPad.

When I checked it, I found the photos.

One week was all it took. One week for him to use the voice button on Google, find those pictures and screenshot them.

Once my shock subsided and I had put the restrictions back on, I gently approached him.

He looked up at me from his toys with his innocent blue eyes. I took a deep breath, knowing those were the same eyes that had been looking at those pictures.

What had he been thinking? Was he just curious? Did he find it funny?

The reassurance of how okay and normal it was to watch. How everyone does.

I had it all ready to go. The embarrassing, necessary conversations in places like the car where they couldn’t run away or slam doors in my face.

What I was not ready for, was what the hell you say when you find photos like these on the device of someone who hasn’t yet mastered the ability to tie their own shoelaces.

Red faced, he admitted he found the photos. He told me he was searching for "bums" (apparently when you're five there is a particular interest and hilarity in "bums") and then found them.

I nodded and said it was ok. I asked a lot of questions. I asked if anyone had ever showed pictures like that to him. I asked if he had ever spoken to anyone he didn’t know online. I queried as to why he wanted to keep those pictures and how it felt when he saw them.

I said that it was okay not to know why you do things sometimes.

But do you know what made it so much harder? The opinions of others.

Mostly I just wanted to make sure my son felt no shame and knew he wasn’t in trouble.

He, of course, would not be punished.

Instead, I punished myself.

My brain began to spiral into a familiar sea of doubt. Doubt about my parenting abilities, about the kind of humans I was raising, of the future and how history would reflect my parenting skills.

Guilt-ridden sleepless nights were spent cursing my inability to protect him from the adult world.

Listen: It's Time To Stop Feeling Guilty About Gaming. Post continues after audio...

I had vivid daydreams about how my mistakes would one day be scrawled into a therapist's notepad to be studied and critiqued.

But then I stopped myself. As I looked at my son's carefree smile, I realised enough was enough.

Time to step off the torturous treadmill of mum guilt.

This year and a half has been extraordinary. Four lockdowns. Months of being confined in the same four walls.

Remote learning with four children had stretched me to my limit.

Through sheer exhaustion, I made a mistake. I dropped the ball. I forgot to put the restrictions back on.

But perhaps it was time to put my own restrictions on when it comes to parenting.

Time to restrict the judgment, the shame, the guilt.

It's about doing your best. And when I talked to my son about what I found on his iPad, I knew that is exactly what I was doing.

bells74 a month ago

Reply
Upvote
Happened to me too around the same age so I told my little guy not to look at them , he was too young etc and it was fine. I also laughed about the shock of it with friends then moved on. Later on a guy at work confided in my friend about his son doing the same thing and he was so relieved when she responded with my experience.

guest mumma a month ago

Reply
Upvote
@guest mumma Tell that time the schools too! In ours it is compulsory for year 1 upwards . My son will be 5 when he starts year 1.