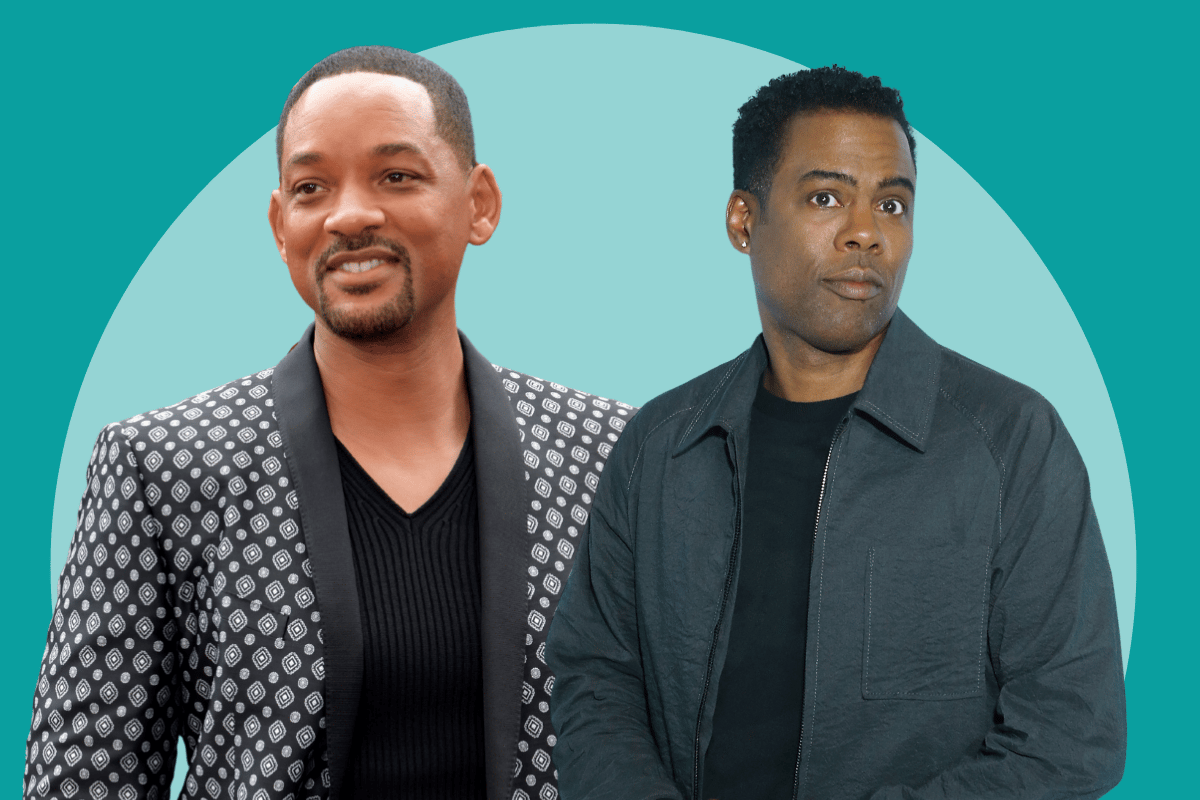 Each and every year it brings about a controversy or two, and 2022 was no different. And at the centre of this year's Oscars' coverage - arguably the biggest story of the event - was the exchange between comedian Chris Rock and actor Will Smith.

For those who haven't yet heard about what went down, here's a quick explainer.

Halfway through the 2022 Oscars ceremony, Chris Rock came on stage to present the Oscar for Best Documentary. During his 'bit', he made a few jokes. Nothing out of the ordinary there.

But it's what he said next, that sparked everything. Rock signalled to Jada Pinkett Smith - who was in the front row with her husband Will Smith - and said: "I can't wait for G.I. Jane 2."

It was a reference to the 1997 film starring Demi Moore, whose character had a shaved head. The joke by Rock was undoubtedly poking fun at Pinkett Smith, who currently has a shaved head as she's been struggling with the auto-immune disease alopecia, which causes severe hair loss.

Watch the interaction between Will Smith and Chris Rock at the 2022 Oscars. Post continues below.

Pinkett Smith has been open about her struggles with alopecia recently. During an episode of Red Table Talk in 2018, she detailed the raw and very emotional impact of losing her hair.

"It was terrifying when it first started. I was in the shower one day and had just handfuls of hair in my hands and I was just like, 'Oh my god, am I going bald?'

"Now at this point, I can only laugh," she said. "Y'all know I've been struggling with alopecia. So it just showed up like that and this is going to be a little bit more difficult for me to hide. So I thought I'd just share it so y'all are not asking any questions."

Even with this context front of mind, what happened next at the Oscars was still a surprise to everyone.

Will Smith walked up onto the stage, struck Rock in the face and then went and sat back down. Smith then yelled out to Rock: "Keep my wife's name out of your f**king mouth."

Rock's response: "Wow, Will Smith just smacked the s**t out of me."

Initially, both the Oscars' audience and people watching on from home were confused. Was it a publicity stunt? A joke?

Footage showed Tyler Perry and Denzel Washington comforting Smith while he wiped tears from his eyes. But after Smith repeated the phrase "Keep my wife's name out of your f**king mouth", many realised the altercation was probably incredibly legit.

Especially when considering the strained relationship between the two stars over the years. 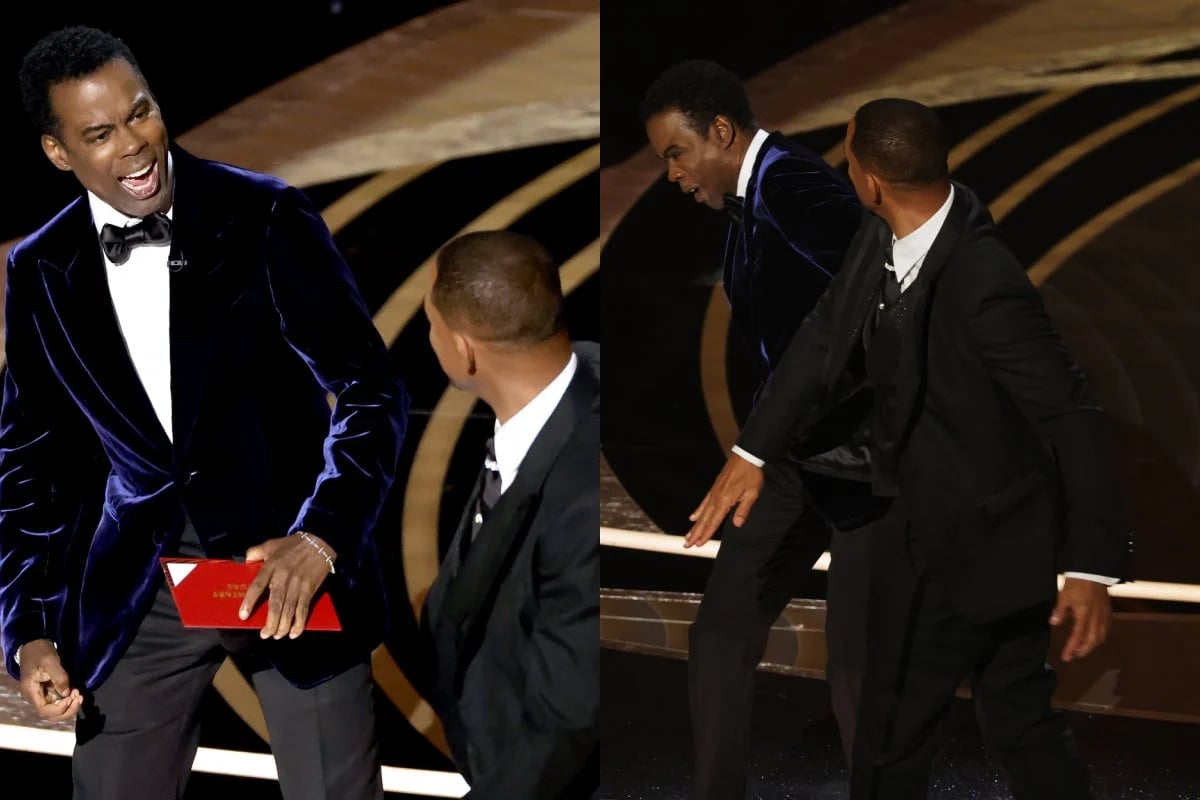 Rock and Pinkett Smith have actually been in one another's lives for quite some time. Many would remember their work together on the hit family film Madagascar in 2005 - Rock voicing Marty the zebra and Pinkett Smith voicing Gloria the hippo over the course of three installments.

Given their familiarity, it's then puzzling to think why Rock has continued to punch down at Pinkett Smith multiple times in his comedy over the years.

The confusion around shaming Pinkett Smith's hair continues when you consider that given Rock previously produced and starred in the documentary Good Hair, which unpacked how Black women have historically styled their hair and the politicisation and sensitivities surrounding it.

Chris Rock made the documentary Good Hair and apparently learned nothing.

Then in 2016, Rock hosted the Oscars. That year's awards ceremony was plagued by the hashtag #OscarsSoWhite, given the major lack of representation and diversity in the nominations list.

With this in mind, Pinkett Smith had announced just before the ceremony that she would be "boycotting the Oscars" given just how few Black people were nominated. Pinkett Smith also made note of the fact her husband had been snubbed for his performance in the film Concussion.

Seeing Pinkett Smith's video as a comedic opportunity, Rock belittled her in his monologue: "Isn't she on a TV show? Jada got mad, said she's not coming. Jada boycotting the Oscars is like me boycotting Rihanna's panties. I wasn't invited." Those in attendance were in fits of laughter and clapping encouragingly.

It's a moment that perhaps has stuck with the Smiths ever since.

Will Smith said to Good Morning America at the time about his boycotting: "This is so deeply not about me. This is about children that are going to sit down and watch this show and they're not going to see themselves represented. There's a regressive slide toward separatism, towards racial and religious disharmony. And that's not the Hollywood that I want to leave behind." 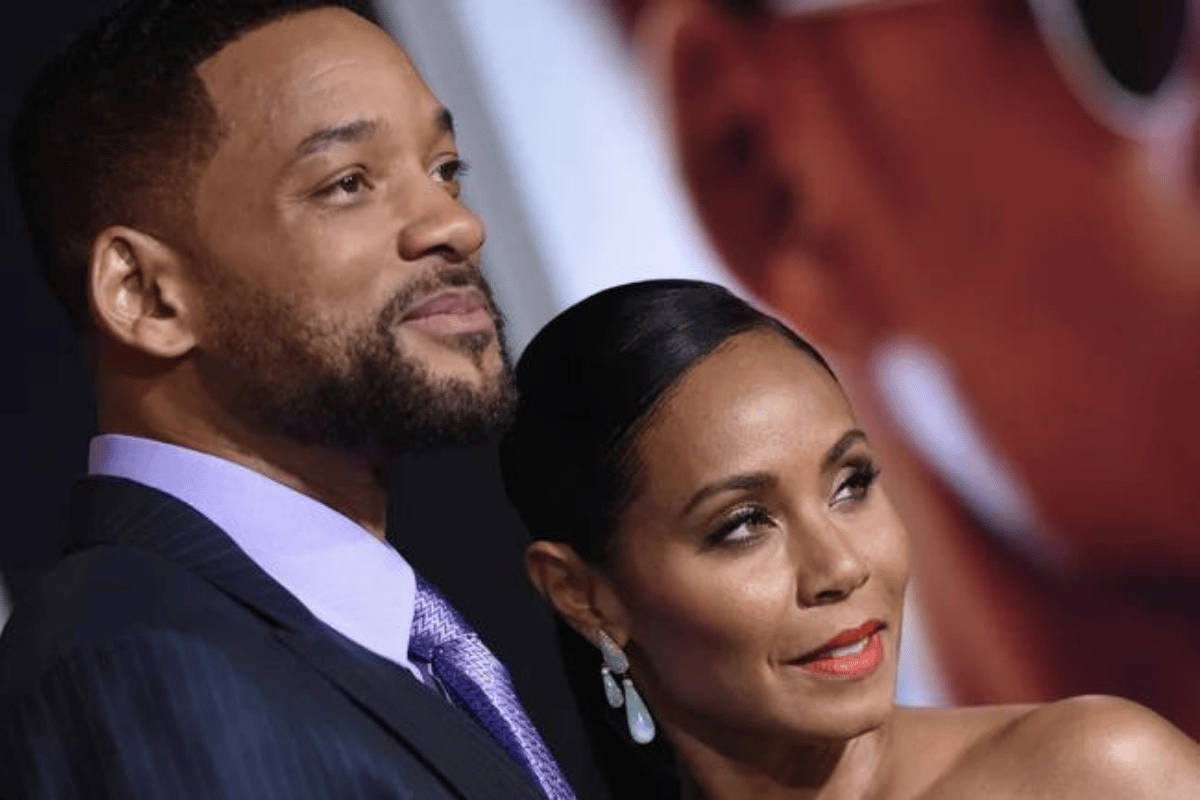 This also isn't the first time Rock has made some controversial jokes.

And then at another stand-up gig, the comedian made "relentless jokes about sexual harassment, rape and Harvey Weinstein".

Listen to today's episode of The Spill. Post continues after audio.

On the same hand, many are also rightly pointing out that resorting to violence is never the answer, and Smith striking Rock and then winning a Best Actor award doesn't send a good message. Not to mention the inspirational story of Serena and Venus Williams has once again been overshadowed by controversy, given Smith won for his performance in King Richard.

As the Academy said in a statement: "The Academy does not condone violence of any form. Tonight we are delighted to celebrate our 94th Academy Awards winners, who deserve this moment of recognition from their peers and movie lovers around the world."

As for what happens now, the Los Angeles Police Department made a statement, saying: "LAPD investigative entities are aware of an incident between two individuals during the Academy Awards program. The incident involved one individual slapping another. The individual involved has declined to file a police report. If the involved party desires a police report at a later date, LAPD will be available to complete an investigative report."

Reply
Upvote
3 upvotes
This would have been such a great opportunity for Will and Jada to educate people about auto-immune diseases and preach sensitivity and kindness. If he had have thought about it for a minute and controlled himself, it could have been a really powerful moment.
J
jms 2 months ago

Reply
Upvote
3 upvotes
I am shocked that Chris Rock has been pegged as the bad guy! I quite liked the Smiths until this incident and now I see them as absolute narcissists who can’t take a joke. Those hosts are there to target celebrities and make fun of them for our entertainment…what about Ricky Gervais?! But to imply Chris Rock is a bad guy in this and NOTHING about how dangerous Will Smith’s response to it was “love will make you do crazy things…”
So will we forget the article about how many women have been killed this year by domestic violence?
C
cat 2 months ago

Reply
Upvote
2 upvotes
@jms Chris Rock is hardly innocent. Will shouldn't have hit him, but no one is obliged to "take a joke" about their medical issues, thats well below even the lowest bar. You wont find Ricky Gervais doing that, because he understands where the lines are between comedy and just being a bully.
L
laura__palmer 2 months ago

Reply
Upvote
1 upvotes
@cat Ricky Gervais literally just made a tasteless joke about alopecia on Twitter. He's not above this stuff. He's a massive bully. Example: one of his jokes makes fun of a boy with autism.
C
cat 2 months ago

Reply
Upvote
1 upvotes
@laura__palmer well he reposted a joke he made 15 years ago about a fictional character with alopecia. His schtick is that you are supposed to be horrified by what a terrible person he is, not that you are laughing at someone else.  Whereas Chris Rock is definitely always just making fun of someone else.
News
General
Opinion
True Crime
Politics
Sport
Explainer
Entertainment
Celebrity
Reality TV
Movies
TV
Books
Rogue
Royal
Lifestyle
Beauty
Fashion
Weddings
Home
Wellness
Health
Fitness
Travel
Food
Parents
Before The Bump
Pregnancy
Baby
Kids
Teens
School
Parent Opinion
Work & Money
Money
Finance
Career
Lady Startup
Relationships
Sex
Dating
Separation
Friendship
Family
Real Life
Couples