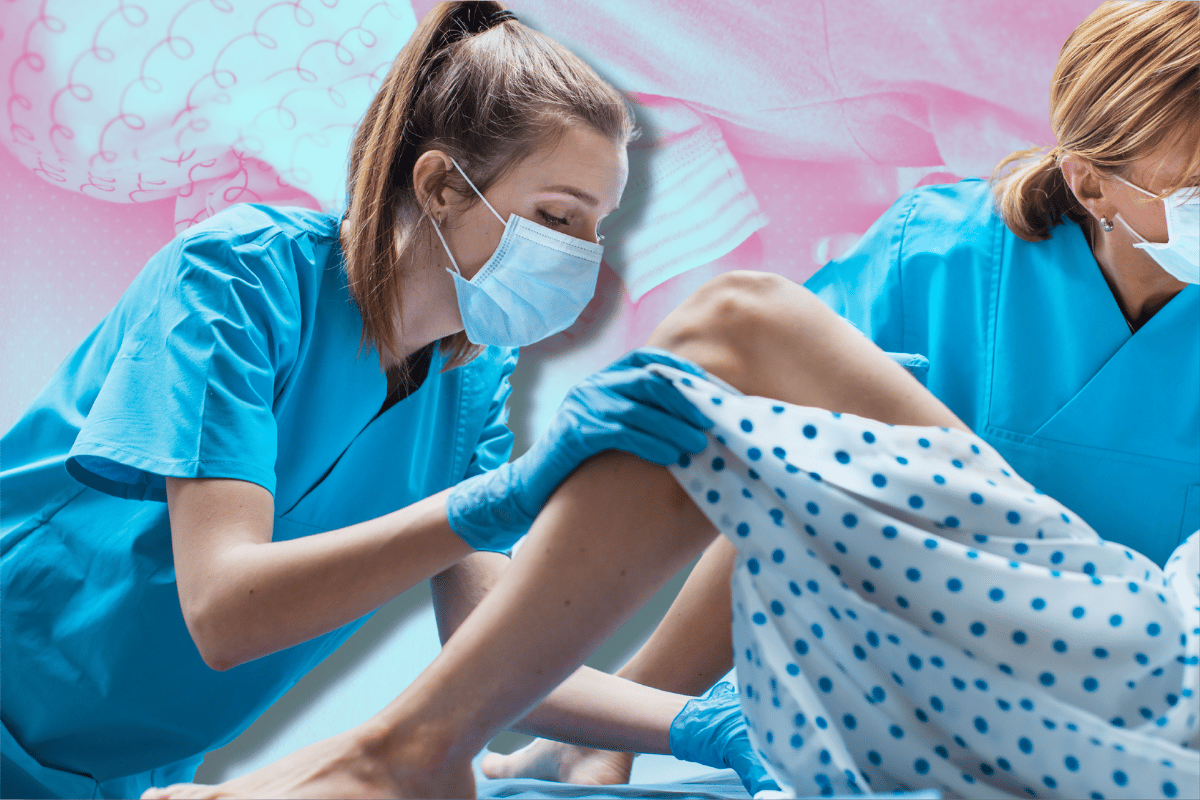 Birthing a human is a pretty big deal, and every birth experience is unique.

When we talk or write about how our babies came into the world, we often focus on how it happened. But what about the random mix of thoughts we really had while in the birthing suite?

We asked our Mamamia community of mums to tell us about some of the funniest, most banal, emotive and downright odd thoughts they had, as they laboured.

"I was starving during my c-section, and asked my husband to fetch me a cheese toastie and a milkshake. He ignored me (sensibly) as I was high and also about to meet my firstborn.

"After I came around properly, I demanded that toastie again. He went to the hospital café and dutifully got my order. I remember thinking it tasted amazing, before promptly throwing it all up." - Laura.

"When I was pushing the placenta out, I remember thinking to myself, 'How on earth do women put these things into their smoothies?' And then my brain went on a long tangent:

'Would I have freezer space?'

'What do you use to portion it up... scissors?'

'What flavours does it go well with?'" - Rikki.

"I thanked the midwife profusely for giving me a sweep just before the head popped out and told her that, 'It felt soooo good!' [My husband] Steve looked mortified and the midwife turned to him and said, 'Don’t worry, she’s high on the gas!'

"I don’t know whether it was the gas, or relief that someone was helping me down there." - Becky.

Watch: The things we weren't told about giving birth. Post continues after the video.

"On the second last push to get my baby out, my waters broke. There was a big pop and a huge gush and I thought I had split from my vagina to my butt hole!

"I was like, 'Oh my God, what just happened, I'm splitting in two!' Calmly, the midwife said, 'That's just your water breaking.' My baby was out with the next push, vagina intact." - Natalie.

"I remember being in full-blown first stage of labour in a bath and getting exhausted and thinking that I was over it and I was just going to go home. I actually thought, 'You guys do it, I’ve done enough today!' I didn’t leave by the way, I caught that thought, hung in there, and delivered a beautiful boy later in the afternoon." - Treena.

"I remember point blank saying I would not [give birth]. I was insistent with twin one coming out, but I was more insistent on using expletives with twin two. Obviously there was no choice, they were coming out, even if I wasn’t letting them!" - Fiona.

"Immediately after giving birth (20 hour labour) I was starving. It was the middle of night and my midwife went hunting for food in their staff fridge. She found a banana yoghurt and a wagon wheel, which I gulped down despite hating both. I still hate both, but desperate times call for desperate measures." - Alysson.

"Midway through my c-section I was like, 'Something is burning, is everything okay?' I thought a piece of equipment might be on fire and the doctors said, 'That’s you as we used the laser to cut you open.' Oh, okay, all good." - Natarsha.

"The student midwife offered to hold my hand during the end stages of pushing. I snapped, 'I don't want to hold your f**king hand, I want it f**king over already!'

"I asked if my son was mine when they placed him on my chest! I realised quickly he was though when I saw how much he looked like his step sister. Nothing at all to do with the fact that he'd just been pulled from my tummy. I blame the drugs they give you for a c-section!" - Merryn.

"I yelled at my obstetrician, a lovely man in his 60s who had been doing this for longer than I had been alive, that he did not know what I was going through, because he was a man!" - Emma.

"It was about 4am, I had been in induced labour with a posterior baby, who was not at all ready to come out and nothing was working how we had planned for 24 hours. I told my husband and everyone in the room, 'If I have to see the sun come through those windows, everyone here dies'. I had an emergency cesarean at 5.23am." - Anna-Louise.

"I’ve never figured out whether I actually said the thing about wanting a c-section, but it was too late to be an option!" - Sarah-Marie.

Listen: Leigh Campbell tells Holly Wainwright her birth story on this bonus episode of This Glorious Mess. Post continues below.

"After 18 hours and a failed epidural, I told my partner and midwife that if I could get off the bed, then I was going to run away so I didn’t have to finish, as if I could leave my belly behind!" - Dominique.

"I went in for an emergency c-section and they gave me too much anaesthetic and my whole body just about stopped working. The obstetrician said she was going to start and my thought was, 'If I die at least my baby will be okay'. We were obviously both okay in the end, but a very scary but honest thought!" - Amanda.

"With my second birth I thought, 'That was definitely a poo!' With my third, which was my first c-section, I thought, 'Oh wow, they're really pushing around in there!'" - Brodie.

"My obstetrician is teeny tiny, but she did all of my consultations while wearing sky high wedges, so I took little notice. I was all prepped for my c-section and trying not to panic when she arrived and my husband leaned over and whispered, 'She just got a step stool to see over the bed!' I was torn between wanting to laugh my arse off and trying not to panic because my doctor wasn’t tall enough to reach my stomach!" - Nic.

"During my c-section, I started feeling tight in the chest as the anaesthetic crept up too high and I felt like I may blackout. They assured me I was fine and my anaesthetist distracted me by asking what I'd name my baby. I said, 'Definitely not Hayden, don't name the baby Hayden if I die, because of the anaesthetic.' That was his name. Thankfully, he just laughed a lot and forgave me for being fairly loopy after two days of labour and exhaustion." - Bree.

"The moment I hit the 'ring of fire' with my second I announced to the room, 'Oh I remember this bit', and they all laughed." - Rachel.

"With my first birth, I felt the moment I pooped on the table when I was pushing. I remember thinking, 'I'm pretty sure I just pooped... but I don’t care.' I think I asked my midwife about it too. She said no, but she was always super polite, and I felt what I felt." - Amanda Lynn.

"I was three centimetres dilated, and I was told I could stay at the hospital, but I decided I needed a frozen coke, so I went home for two more hours instead!" - Fallon.

"As the never-before-met obstetrician was literally cutting into me for my emergency c-section, the nurse said, 'This is her first c-section!' After seeing the mortified looks on our faces, she clarified, 'At this hospital. She’s done thousands [at other] hospitals.'

"She did a fab job, and we loved her so much we went back to her for baby number two." - Karen.

"The day before, I was craving two minute noodles, and I ate close to eight packets. I didn't want them at all throughout the pregnancy! During delivery, I was taking bites of food to hide contractions but I didn't make a noise. I kept thinking that I wanted a tub of gravy from the local takeaway and a bag of ice cubes." - Danni.

"After 20 hours in labour and still not being at the point where they said I could go to hospital, I yelled at my husband to lie to the midwife and say my waters had broken, so I could get admitted and get on the drugs!" - Raechel.

"I was well into labour with my second and then I got the urge to do a number two. The midwife assured me it was just labour, and I surely didn't need to go to the toilet. I was thinking, 'I'll show you' as I sat on the toilet. After finishing my business, she ended up needing to wipe my butt for me!" - Valerie.

"I was in the middle of pushing when my husband's phone rang. I couldn’t speak but I gave my husband the evil eyes - like don’t you dare pick up that phone. He did. It was our house alarm alerting us to an intruder. [My husband] Dave then called our elderly neighbour to stop by our house and check.

"It was a false alarm. Of all the times for it to go off. I had to stop pushing while all this was going on!" - Jess.

"I had a long labour with my first child as he was 'back to back' with me. I was really worried about the cats at home as I couldn't work out when they were last fed so I sent [my husband] Troy back to feed them. I insisted he go. Anyhow, the baby then went into distress so we had to call him to get back to the hospital in time for the imminent birth of his child. Crazy cat lady!" - Hannah.

"I was convinced I was having a boy and a girl, so once my twin boys were delivered by emergency c-section, I asked where the girl was. Thankfully it was twins, not triplets!" - Helen.

"While in labour with my daughter Max, I discovered how good nitrous oxide was! The midwife kept taking it away from me, even though I reassured her I really hadn’t had enough yet." - Carolyn.

Did you experience any weird or wonderful thoughts during labour? Please tell us in the comments below!