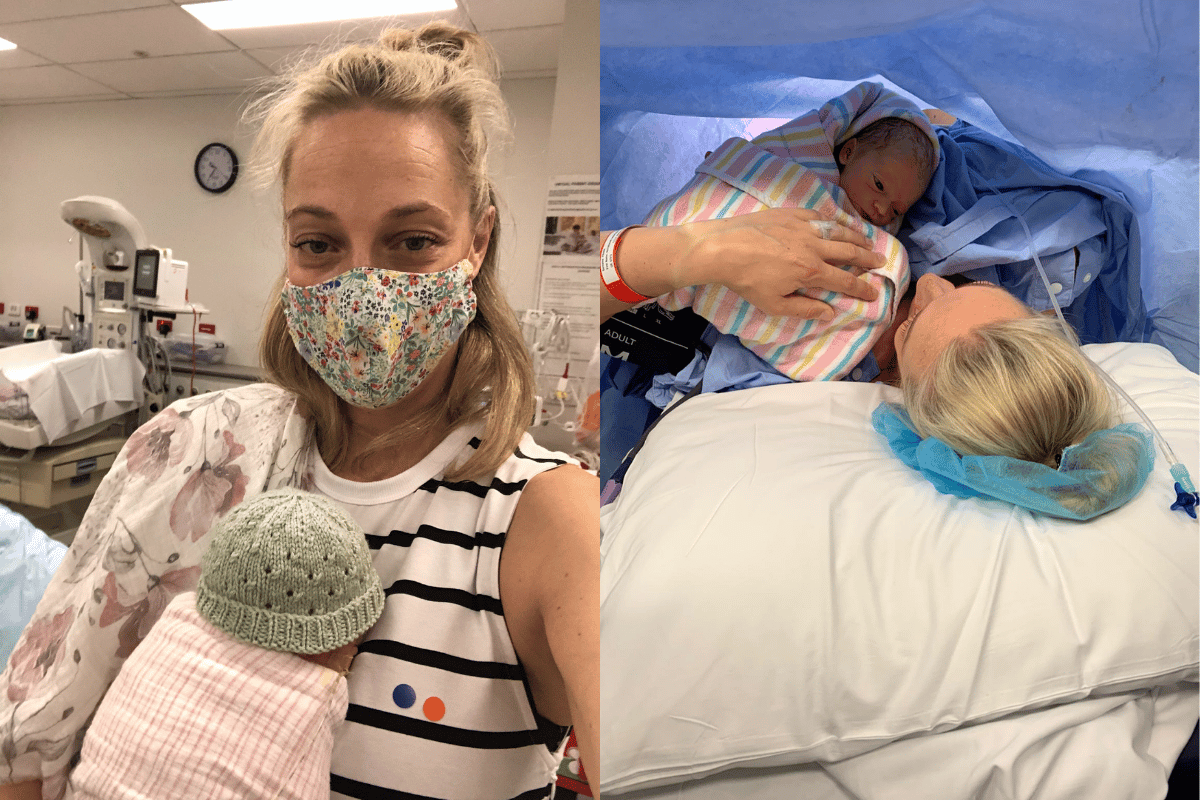 Birth: there's nothing quite like it, and it's clear no two birth stories are the same. Which is why we're asking everyday women and some of our favourite celebrity mums to share theirs, in Mamamia's My Birth Story series. To share your Birth Story, email [email protected] with 'My Birth Story' in the subject line.

This week, we hear from Kate Fitzgerald from Sydney, who is mum to two-year-old Finn and seven-month-old Maisie.

Kate and her husband William met at the baggage claim at Geneva airport seven years ago.

They quickly fell in love and got married in 2017. Baby Finn arrived in 2019 after a textbook pregnancy and birth, but Kate’s pregnancy with Maisie in 2020 proved a lot harder.

"I had a very demanding toddler, and I had all the (pregnancy) symptoms – insomnia being the cruelest. It was nine months of ups and downs."

Kate planned to have an induction for Maisie like she had with Finn, hopeful for the same kind of calm and organised birthing experience.

"We knew when we needed the grandparents to step in and take care of Finn for us. I was actually looking forward to a few days in hospital, toddler free – it was going to be a holiday!"

Unfortunately for Kate and William, baby Maisie was keen to meet them a lot sooner than they expected.

"I dropped Finn at daycare and went to see my obstetrician for my weekly check up at 37 weeks. Luckily – and I mean very lucky as the outcomes would have been very different had she not – my obstetrician performs ultrasounds at every appointment.

"She noticed things had dramatically changed since my last scan only a week ago.

"The amniotic fluid had all but disappeared, and my bub was measuring much smaller than expected."

Kate made a quick and emotional call to William to tell him to come home from work and take her to the hospital as the baby was coming.

"I was more shocked than scared and I had little time to process it all," she recalls.

"My husband then rang my parents, who we’re still on holiday, to let them know what was happening. My mum abandoned her shopping trolley in the supermarket and raced back to Sydney to come and look after Finn."

Prior to this urgent change of plans, Kate had been told an induction was on the cards. But after an assessment at the hospital showed their baby was in distress, Kate was told she would need an emergency caesarean.

"William suddenly appeared wearing scrubs, as did my obstetrician, and we were on! At 12.51pm, just three hours after my doctor’s appointment, Maisie arrived. She was tiny at 1.8kg, but perfectly healthy.

"I will never forget the cheers that erupted in the operating theatre when she let out her first cry and we knew she was okay."

Listen: Hosts Leigh Campbell and Tegan Natoli chat about premature births in this episode of This Glorious Mess. Post continues below.

While Kate felt relief that Maisie had arrived safely, extreme pain hampered her feelings of elation.

"Maisie was in the special care nursery as she was so small, but I knew she was being well looked after. My recovery however, was as bad as they come.

"For three days, I cried non-stop from the pain in my abdomen and yet I carried on pumping milk for Maisie around the clock.

"I was too sick to even visit her in the nursery. I kept saying, 'If this pain is normal, no woman would ever have an elective caesarean!'

"Finally, after my temperature sky-rocketed, and they realised my bruising wasn’t normal, they called my obstetrician who came to see me on a Sunday afternoon, still with sand on her feet from a visit to the beach."

After a CT scan, they found a blood clot the size of a fist sitting on Kate’s uterus. She also he had an infection.

"The cause of the intense pain was at last revealed and the medical team gave me antibiotics to help. Unfortunately, I had an anaphylactic reaction to the drugs that nearly put me in ICU! But finally, after a week, I could go home."

Once Kate was discharged, she continued to come to the hospital each day to visit baby Maisie. She was pumping milk around the clock and bringing it to the hospital in a cooler bag.

"Because of COVID, my husband and I couldn’t visit her together, so I had to manage most of this experience alone. Even then, I could only be with her for about an hour a day, because of COVID restrictions.

"I moved into my parents' house so they could take care of me as I was so sick I couldn’t look after myself, let alone my son Finn. Thankfully William could do everything for him in the weeks after Maisie’s birth."

After three weeks and spending over $500 in Ubers to and from the hospital (Kate could not drive due to her caesarean), the couple could finally bring Maisie home and introduce her to her big brother Finn.

"We’ve now had six months of living life together as a family of four and we are so happy, blessed and tired!

"From small beginnings, Maisie is smashing all her growth targets and even has a few little baby fat rolls on her thighs.

"I’d go through the entire experience again in a heartbeat for her. She’s the icing on the cake of our family and I couldn’t love her more."

To share your Birth Story, email [email protected] with 'My Birth Story' in the subject line.