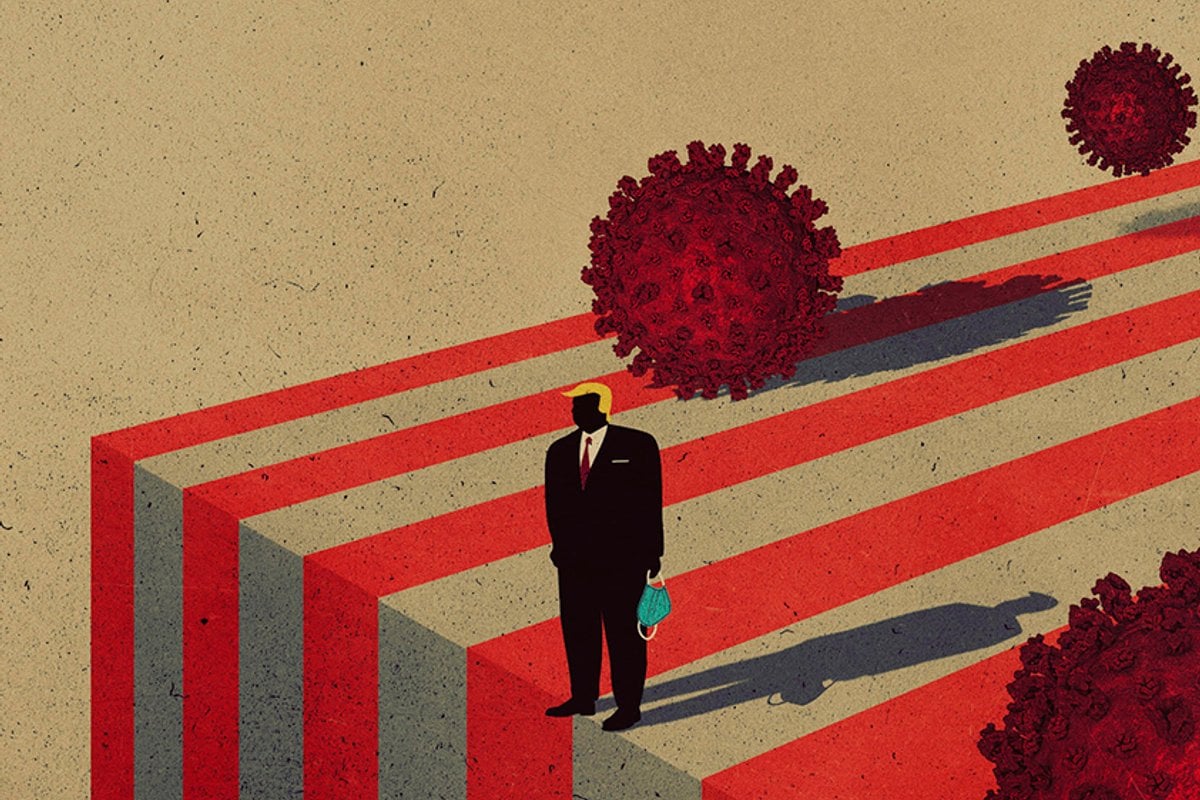 On January 22, 2020, the United States had one case of COVID-19. A reporter asked President Donald Trump if the country should be concerned about a pandemic.

Two days later, on January 24, Trump tweeted: "It will all work out well."

As of November 10, roughly 10 months since the president uttered the words "totally under control," 239,000 people have died of COVID-19. That's more than anywhere else in the world. In fact, it's almost double the second highest rate, with India having lost 127,000.

More than 10 million people have been diagnosed, accounting for one fifth of the world's total cases. Infection rates are speeding up rather than slowing down.

Watch the trailer for Totally Under Control right here. Post continues below.

Oscar-winning writer-director Alex Gibney, best known for his work on Going Clear and The Inventor, found himself in an all too common situation early in 2020. A friend died from COVID-19 and another was on a ventilator. The US government had failed, clearly, to contain the virus, while so many other countries had succeeded. Described by Esquire magazine as "the most important documentarian of our time," Gibney decided to make a film about the US response to a global pandemic. And he wanted it released before the election.

Along with his co-directors, Ophelia Harutyunyan and Suzanne Hillinger, Gibney embarked on what would have felt like an impossible task: filming a documentary at a time when you're not meant to be leaving the house.

Cinematographer Ben Bloodwell came up with a specialised kit to send to subjects so they could film themselves, and other interviewees sat in large rooms, with camera operators hidden behind plastic shields.

The two-hour documentary interviews government whistleblowers and experts from all over the world about what the US government knew and had at their disposal to stop the spread of COVID-19. In 2019 for example, the Department of Health and Human Services simulated a pandemic described to share "eerie similarities" to the coronavirus. They came to a number of conclusions and put together a playbook in the event of a real life pandemic.

Only a matter of months later, COVID-19 hit. And the Trump administration never took that playbook off the shelf.

Listen to this bonus episode of Mamamia Out Loud, where Mia and Amelia debrief the US election. Post continues after podcast.

Throughout the documentary, Gibney contrasts the US response to COVID-19 with South Korea. Both countries had their first case within days of each other. Both faced a choice about how they would respond. As of today, South Korea has lost 485 lives to COVID-19. That's 500 times less than the US.

The irony, Gibney highlights, is that South Korea knew how to respond, at least in part, because of the medical research produced by the United States. It was the US who invented the N95 face mask in the 1990s. They had the same information at their disposal, South Korea just chose to listen to it.

Expert voices and the testimony of health care workers are contrasted with Trump's statements throughout the documentary, illustrating the disconnect between what the American people were being told, and what was taking place.

Totally Under Control was released in the US on October 13, 2020, and in the first 72 hours was viewed more than six million times. The Hollywood Reporter called the film, "a calm indictment of lethal presidential incompetence," and it has been both a critical and popular success.

If there is anyone who needs to watch this film more than Americans, it's Australians.

While, arguably, no government response has been perfect, Totally Under Control illustrates the magnitude of devastation when a nation's leader is anti-science.

The countries that fared best, Australia being one of them, are those that listened to the experts, and worked swiftly to contain the spread. History will surely dissect 2020 in years to come in an effort to extract as many lessons as possible.

Gibney's documentary is a brave, damning and affecting first attempt, in the midst of one of the greatest public health crises the United States has ever seen.

Totally Under Control is now available to rent or buy in Australia, either from YouTube, Google Play or Amazon Prime from $5.99.

Reply
Upvote
Whilst Donald Trump's handling of the coronavirus pandemic has been woeful, comparing South Korea to USA is unfair.   South Korea has a population of about 51 million.  It was the draconian actions and complete infringement of its citizens' civil liberties, turning the country into a surveillance state by the South Korean Govt giving it the power to control the virus.     The USA has over 330 million people spread  across 50 states, with each state fiercely protective of its autonomy from Federal interference.   South Koreans are used to wearing masks if feeling unwell when going out in public, , but the WHO advised against both wearing masks and closing borders to international travellers,   Certainly Trump should have listened to scientific evidence, shown more empathy etc and perhaps the death rate would not have been so high,   But, then again, it wasn't Trump who made the decision to send COVID 19 patients to nursing homes, resulting in over 6,000 deaths alone in New York.
james b 4 months ago

Reply
Upvote
1 upvotes
@guest2 Hindsight is 20-20, it would be interesting to hear someone from the 'other side' say exactly how they would have handled the situation, especially since it seems that democrat controlled states fared worse than republican states in many cases.
Don't forget that they also criticised Trumps ban on people coming in from China as "racist" and of course Speaker Pelosi's field trip to San Francisco's Chinatown in late February where she stated "That’s what we’re trying to do today is to say everything is fine here," come because precautions have been taken. The city is on top of the situation."
random dude 4 months ago

Reply
Upvote
5 upvotes
@james b I'd suggest one reason the Democratic states fared worse is due to those states generally having a higher population density (ie city living) as well as increased infection chances due to being travel hubs.
cat 4 months ago

Reply
Upvote
3 upvotes
@guest2 he did make the decision not to send resources and equipment to New York though, despite desperate requests, leaving the city without resources to care for the elderly. Point as many fingers as you like, all of them lead back to Trump.
cat 4 months ago