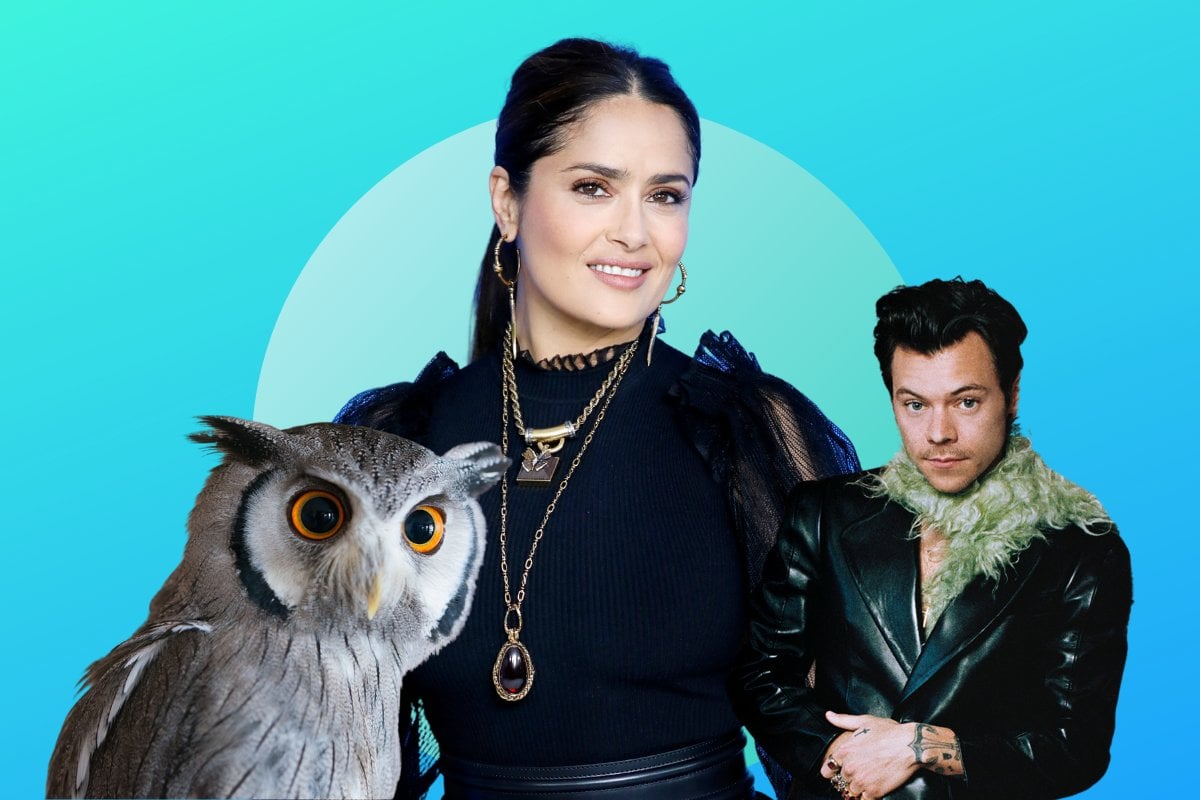 There is only one story I care about right now, and it involves Salma Hayek's owl puking on Harry Styles.

What a sentence. What a visual. What a story.

For a while now, the world has known about Salma Hayek's pet owl. Her name is Kering, which is also the name of the multinational corporation specialising in luxury goods that her French billionaire husband happens to be the CEO of.

It's all very relatable.

Hayek really bloody loves Kering. As the story goes, Kering is a rescue owl she persuaded her husband to bring into their family, which also includes multiple dogs, a cat, rabbits, horses and an alpaca.

She regularly shares photos and images of them hanging out, and I don't want to... assume, but I'm pretty sure Kering is Hayek's favourite thing in the world. Sorry to her husband.

In April, Hayek and the owl were even featured in People's Most Beautiful issue. Bold move, considering Kering is not a... person.

Kering seems to travel with Hayek too, for reasons that remain unclear, and even sleeps in her bed when her husband is away.

How does an owl sleep in a bed? Is it tucked in? Are talons and sheets compatible?

The questions are endless, but that is just another tangent off this main owl-based story. I digress.

On June 15, Hayek appeared on The Ellen DeGeneres Show to speak about her latest movie Hitman's Wife's Bodyguard (and Kering).

Hayek spent most of the interview speaking about her owl. Who, besides the movie's publicists, can blame her? 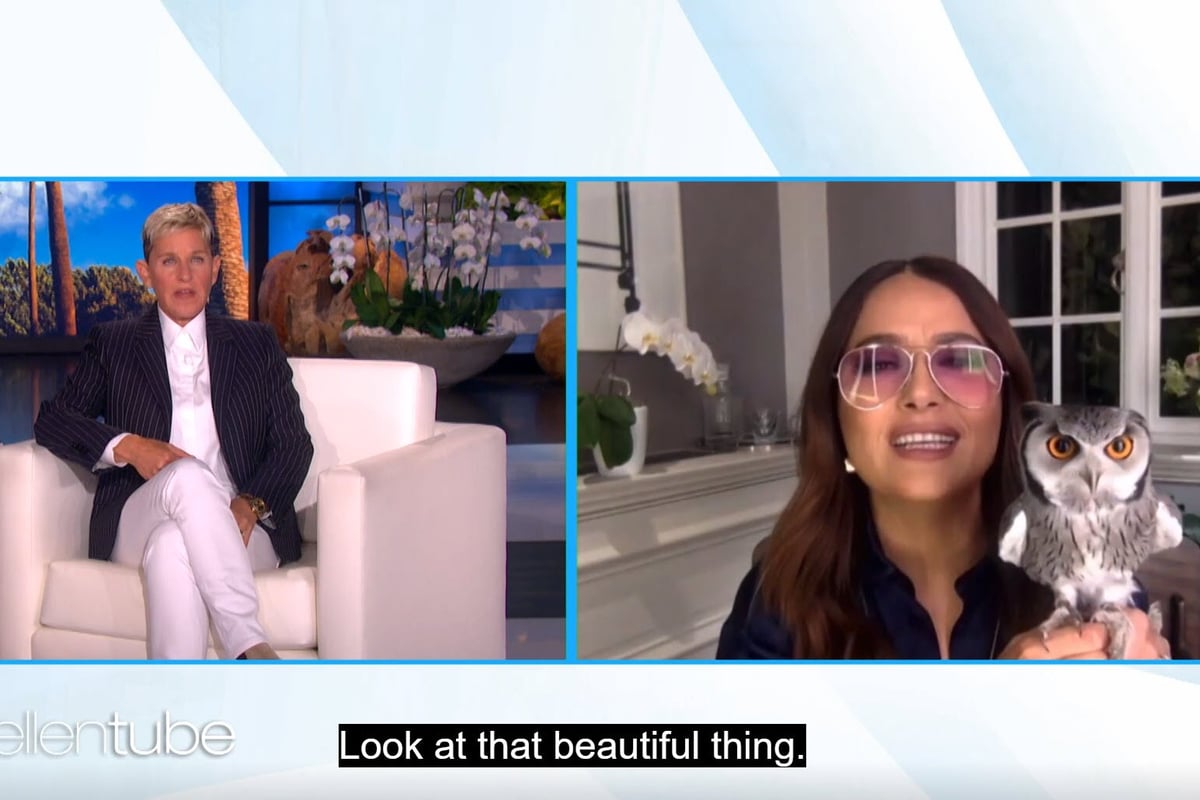 That's Karing on the right, to be clear. Image: NBC.

Through the chat, we learned that Kering often attacks Hayek's feet in the night because she mistakes them for mice, and that eating so many rodents often results in... hairballs.

And one such hairball ended up on Harry Styles' head.

At first, she avoided naming Styles directly but told the story of how when he visited her house, he was interested in Kering (I mean, who wouldn't be? There's just a random owl flying around the place, attacking toes and sh*tting on the furniture).

"One time, there was a very important celebrity—I will not say his name—and he was really excited about the owl and hoping that the owl would go on his head because it was on me," she said.

"He's like, 'Oh, I need an owl in my life. How do you do that?' And the minute he least expected it, it came on his head—but then she did the thing [coughed up a hairball]... This ball of rat hair was on his head."

She said the ~mystery celeb~ was okay with it and "didn't scream".

This owl straight up puked into the luscious locks of Harry Styles. Wild. 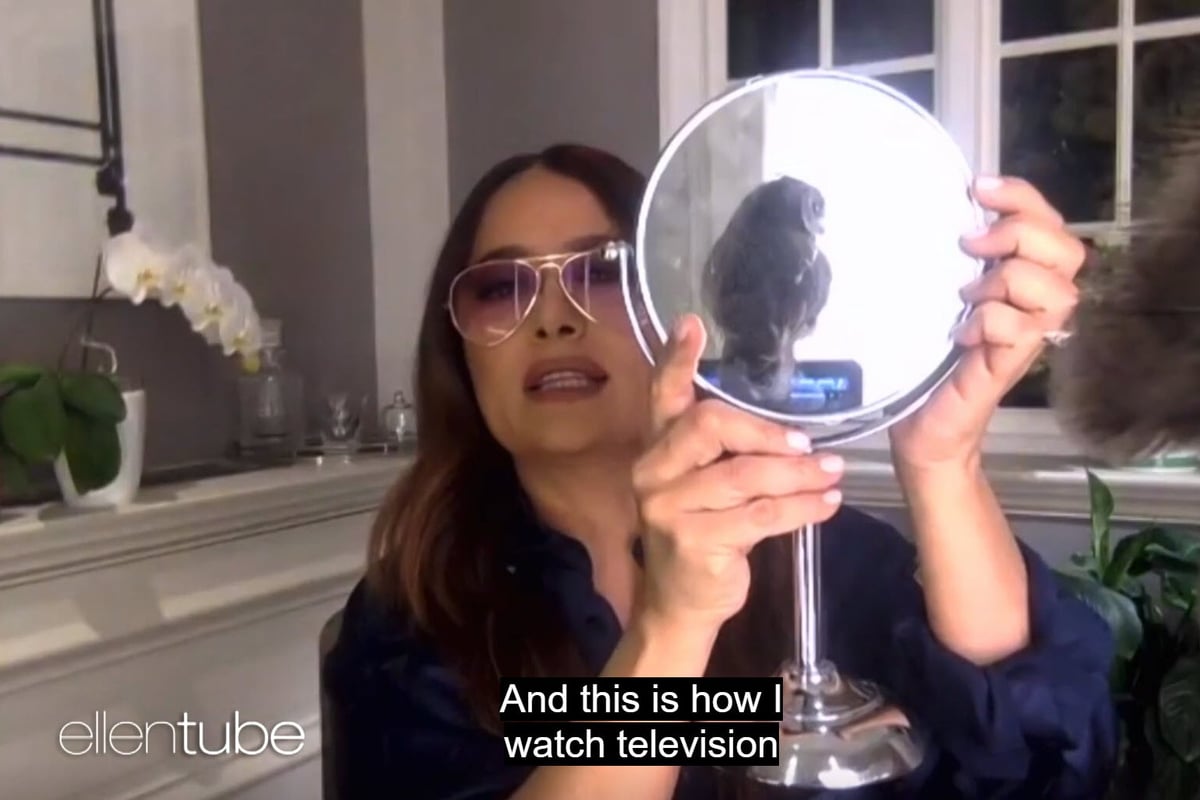 BUT WHY. Image: NBC.

Hayek eventually gave up Styles' identity, joking "I hope I'm not in trouble".

In naming him, she may have given away that Styles co-stars with her in upcoming Marvel film Eternals as rumoured, but that's not the main takeaway here.

BECAUSE HER OWL VOMITED RAT HAIR ON HIS HEAD.

The owl of the hour did make an appearance in the interview as requested by DeGeneres, but she didn't exactly cooperate for the cameras.

No word yet on how Styles has recovered from all of... that. I sincerely hope he is doing okay.