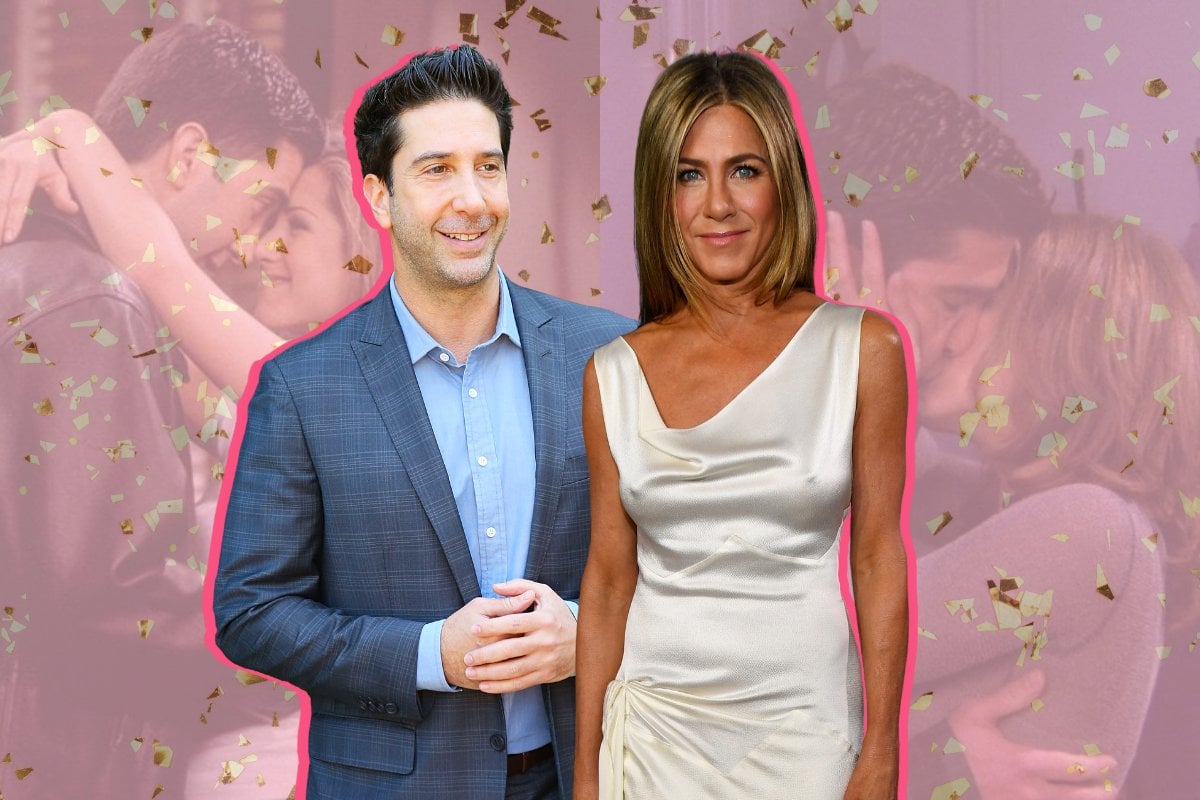 Not sure if you heard, but there was a Friends reunion this week.

It really snuck up on us, didn't it? I hadn't heard anything in the lead up, and absolutely no one in my life has been speaking exclusively about it for months.

So yes, an under-the-radar reunion of the little-known 90s sitcom has now been and gone, leaving us singing 'Smelly Cat' and projecting our love of TV characters onto the real-life actors once again.

Watch: Friends: The Reunion: the trailer. Post continues below video.

David Schwimmer and Jennifer Aniston admitted during the reunion that they had crushes on each other IRL while playing everyone's favourite (toxic) couple, Ross and Rachel.

Friends: The Reunion host James Corden asked how the cast filmed 10 seasons of the show without any off-camera romances developing, which caused the co-stars to exchange awkward glances.

"Ah well, I mean. David..." Aniston, 52, trailed off before looking at Schwimmer.

"Yeah, in the first season we… I had a major crush on Jen," Schwimmer said, which Aniston added was "reciprocated".

"I think we both, at some point, we both were crushing hard on each other," he continued.

"But it was like two ships passing, because one of us was always in a relationship and we never crossed that boundary. You know, we respected that."

During the filming of Friends, which ran from 1994 to 2004, Aniston dated actor Tate Donovan before marrying Brad Pitt.

"I remember saying one time to David, 'It's going to be such a bummer if the first time you and I actually kiss is going to be on national television'," Aniston said during the reunion.

Sigh, the whole thing had us relating to Chandler more than ever before. 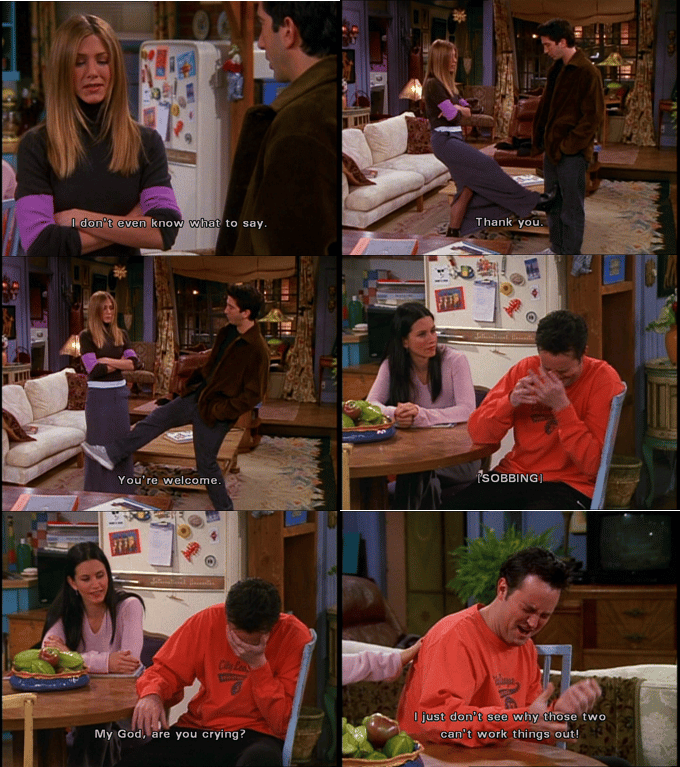 Schwimmer said when reflecting on that time in their lives, he couldn't believe no one noticed they were crushing on each other because they would regularly cuddle between takes.

It turned out they... definitely did notice.

Courteney Cox in particular she was grateful nothing ever eventuated between them.

"How great though, ultimately, because if you had, and it didn't work out it probably wouldn't have been as great," she said.

Interestingly, the question which led to this revelation wasn't an off-the-cuff decision from Corden.

how do people expect me to be fine after today when I'll be forever carrying the knowledge of David and Jennifer were crushing on each other and reflecting that energy into Ross and Rachel? #FriendsReunion pic.twitter.com/t6v9iSzAyw

Ben Winston, the director of the reunion, told the LA Times he got to know the cast over Zoom before the taping and Schwimmer had told him there was something he and Aniston had never spoken about before, but he was unsure if he wanted to talk about it.

So he fed to question to Corden, who had no idea what kind of answer he was about to get.

"You can see David and Jen are a bit like, 'Shall we answer this? Oh, what the heck, let's do it," Winston said. "And so I was really delighted. It makes you look at all that whole arc [between their characters] through a real different lens."

Besides putting the long, arduous journey of Ross and Rachel in a new light, the revelation has also led to fan speculation, because unless there're things we aren't privy to (which is... likely... because we're not mates with A-listers), both Aniston and Schwimmer find themselves single right now.

We'll just conveniently ignore the February 2021 report in In Touch Weekly which claimed she had "tons in common" with a "down to earth, handsome" but mysteriously unidentified new boyfriend. That doesn't fit this narrative at all.

Which means people have one thing on their minds:

Jennifer Aniston & David Schwimmer had real life feelings for each other the first year of taping. Now, they are both single. You know what I’m thinking? One can dream. #FriendsReunion

I really love that David Schwimmer and Jennifer Aniston didn't date in real life even though they had feelings for each other, it would have ruined the show. They are however both single now...and the show ended 17 years ago #FriendsReunion pic.twitter.com/aGLGzeW5Tc

And if neither Aniston and Schwimmer ever acknowledge this again, we'll always have the reunion.