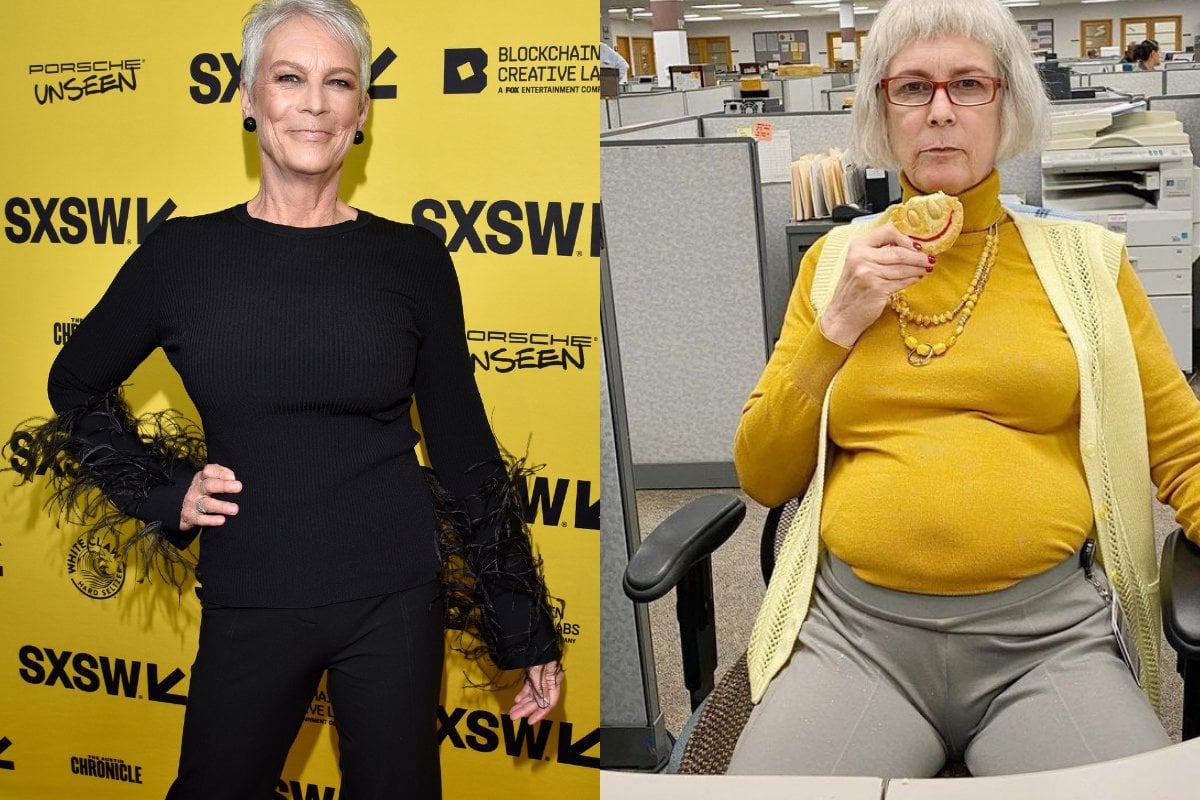 Jamie Lee Curtis reached stardom in 1978, when she was 19-years-old.

Now, after 44 years in the industry, she's made it clear she is done "sucking her stomach in" and is now releasing "every muscle I had that I used to clench".

For her new film Everything Everywhere All At Once, the actor revealed she refused to conceal "anything" about her appearance.

"In the world, there is an industry - a billion-dollar, trillion-dollar industry - about hiding things. Concealers. Body-shapers. Fillers. Procedures. Clothing. Hair accessories. Hair products. Everything to conceal the reality of who we are," she wrote on Instagram this week.

Watch the trailer for Everything Everywhere All At Once. Post continues after video.

Curtis said she had been "sucking my stomach in since I was 11, when you start being conscious of boys and bodies, and the jeans are super tight".

"I very specifically decided to relinquish and release every muscle I had that I used to clench to hide the reality. That was my goal. I have never felt more free creatively and physically."

Curtis' figure has been in the headlines since the 1980s, with red carpet occasions and paparazzi shots documenting the actor for the last 40 years.

Now aged 63, when filming Everything Everywhere All At Once, Curtis made the decision to showcase her figure in its truest form.

In an interview with Entertainment Weekly, director Daniel Kwan, echoed that the driving force behind Curtis showing a body which looked as "real" as possible, was Curtis herself.

"Everyone assumes that her belly in the movie is a prosthetic, but it's actually her real belly," Kwan examined.

"She was grateful that she was allowed to just let it out."

The choice, it seems, stemmed from a reflection of her own mother's relationship with her body.

Curtis' parents were actors from the 50s, Tony Curtis and Janet Leigh - an era deemed the 'Golden Age of Hollywood'.

"I think the most complicated relationship my mother had, both loving and often cruel, was with her own body," she explained to More Magazine in 2010.

"Her face was undeniably beautiful, like a shot of something strong, and her body - that body was the chaser. She was intoxicating."

The Freaky Friday actor went on to say fame changed her mother's perception of her own body.

"Like anyone who becomes famous for what they look like, when that commodity starts to change, the relationship with it deteriorates.

"Her friends noted her slimness by calling her Bird Legs, and my mother was incredibly proud that she returned to her 20-inch waist mere weeks after pregnancies. She judged other actresses whose bodies grew and softened."

Listen to The Spill, hosted by Kee Reece and Laura Brodnik. Post continues after audio.

Curtis has been married to Christopher Guest since 1984. They share two children together, Annie, 35, and Ruby, 26.

In Everything Everywhere All At Once, Curtis stars alongside Michelle Yeoh, Ke Huy Quan and Stephanie Hsu.

The mind-bending new science-fiction film tells the story of Chinese immigrant 'Evelyn Wang' (Michelle Yeoh) who is unable to complete her taxes. From there spurs a multiverse reality for Evelyn who somehow exists in multiple realities.

Curtis stars alongside Yeoh as 'Deirdre Beaubeirdra', an IRS auditor.

"I can't wait for everybody to see the BRILLIANCE of [Everything Everywhere All At Once]," Curtis said.

Everything Everywhere All At Once is set to release in select Australian cinemas April 14.