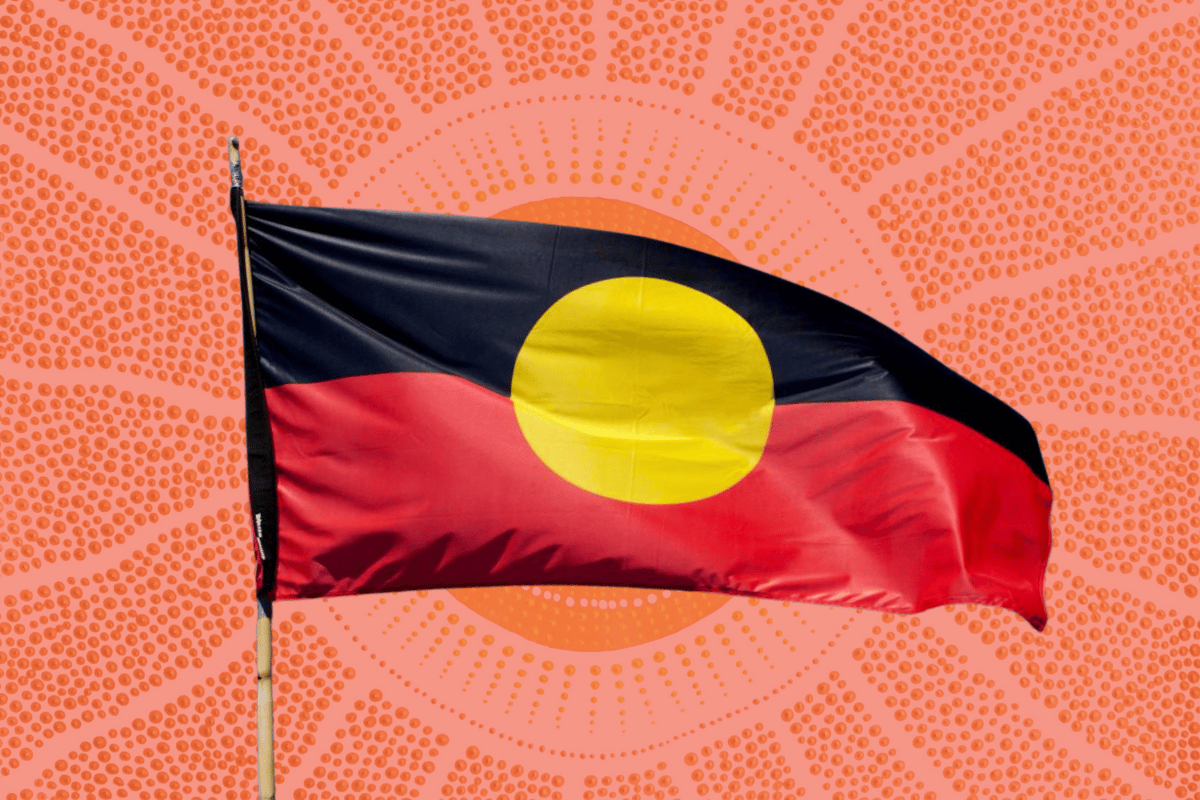 On the eve of January 26, the Aboriginal flag's copyright was overturned, meaning the flag now "belongs to everyone".

The Federal Government completed a $20 million deal to take ownership of the flag's copyright from a non-Indigenous clothing company, which had a history of sending Indigenous groups cease and desist warnings for using the flag in breach of copyright.

The deal means the flag is now freely available for public use, with Minister for Indigenous Australians Ken Wyatt saying the news was "profoundly important for all Australians", adding "no one can take it away".

But not everyone is convinced that the red, yellow and black flag is in the right hands now.

Watch: What country means to Indigenous people. Post continues below.

Wait, what - why wasn't the Aboriginal flag free to begin with?

In 1970, artist Harold Thomas, a Luritja man, designed the Aboriginal flag as a symbol of Aboriginal people's connection with the land.

In 2018, Thomas sold the exclusive worldwide copyright licensing to three separate companies: one to make the flag itself, one to make souvenirs and the third who had the sole right to print the flag on clothing.

WAM clothing, which are not an Indigenous company, was soon brought to the attention of Aussies, and the campaign for the flag's copyright to be overturned began and was found successful in 2022.

A statement from Prime Minister Scott Morrison said: "We have freed the Aboriginal flag for Australians."

So now that the Australian Federal Government essentially owns the flag's copyright, some are debating if the flag is actually "free".

Many Indigenous activists have argued that ownership should have been transferred to the First Nations community, not the Commonwealth Government.

How do First Nations people feel about the 'freeing' of the flag?

Thorpe shared why many people are angry about the deal and what could and should have been done instead to uphold the autonomy and self-determination of Australia's Indigenous population.

"I felt shock horror that the colonial system that has hurt our people for so long now has the copyright to the one thing that united Aboriginal people across this country. How are we going to get it back again? This fight is not over," Thorpe said.

She noted that many in the Indigenous community hoped the government would pay for the copyright to be ended, but the flag should have been returned rather than kept.

"It wasn't for the government to pay it out and then keep it for themselves. The government heard in the first Flag Enquiry from grassroots Blackfellas around the country saying 'the flag belongs to us. It needs to come back to the people'."

Thorpe continued: "We want to self-determine what happens to our flag. The Torres Strait Islands own their flag: it's not like the Australian Government didn't know what to do, they just chose to use the timing of their announcement to make themselves look good at a time when this country is divided."

Harold Thomas has said he will use $2 million to make an Australian Aboriginal Flag Legacy not-for-profit.

"The Aboriginal flag design is my dreaming. The flag represents the timeless history of our land and our people's time on it," he said. "It is an introspection and appreciation of who we are. It draws from the history of our ancestors, our land, and our identity and will honour these well into the future."

For Rachael Sarra, a Goreng Goreng woman, she doesn't consider the flag as free "while it resides in the hands of the coloniser".

The designer, artist and activist told Mamamia, "It needs to be given back to our people, just like our land should be."

"The #FreeTheFlag campaign has succeeded after a $20 million buyout to free the Aboriginal flag. I've slept on it, and is the flag really freed if its copyright is owned by the same government that has taken and profited off our land? The same government that removed our children? Time to hand back the copyright to the community," she wrote on Instagram.

Clothing The Gaps and other organisations have been calling to "free the flag" for years so Aboriginal people can replicate and monetise their flag without the threat of legal action taken against them.

The business wrote on their Facebook page: "So excited to see Blak brands bring out flag products with NO fees paid to non-Indigenous businesses, no strings attached. With the flag being free for all to use we're going to see an influx of Aboriginal flags! It's now a consumer's choice who to buy flag products from. Choose Blak business! There are more conversations to be had, more truths to be accepted and changes to be made."

She told Mamamia: "I've loved the explosion of creativity that we've seen with artists re-imagining the flag and what it has come to represent. Is the flag 'free' now? I guess so in a crude sort of way. But does that make what happened ideal? I don't think so.

"The Aboriginal flag is our flag. Our power. Our pride. Our fight to assert our rights as a people. I'd like to see a similar arrangement that the Torres Strait Islander flag enjoys. I don't know what that looks like but I think it's a yarn worth having now that the flag has been colonised."

As for now, Maddy reminds us that it's really important to know where we are buying things from.

"Blackfullas in business is a powerful expression of self-determination. Find an Aboriginal business to support."

Indigenous woman Nova Peris OAM, a former senator and Olympian, was instrumental in putting pressure on the Australian Government to help remove the flag's previous copyright.

In July 2019, Nova, Laura Thompson and Michael Connolly from Dreamtime Kullilla-Art went to Parliament House in Canberra to lobby for #FreeTheFlag.

Speaking about the 'freed' flag, Nova wrote: "Our voices were finally heard almost three years later. Thank you to everyone who joined in the campaign. To those Australians who believed in the cause, we thank you, and those with public profiles who gave their names and created additional platforms, we thank you! Our Flag is FREE to be used by everyone. It has the same freedoms as the Australian Flag."

Tanna is a Byellee and Kanaka (South Sea Islander) woman, who provides resources via her social platform Teaching with Tanna.

Tanna is also a secondary teacher, who works as a First Nations Advocate, providing support and guidance "to the young mob and their families and overseeing First Nations perspectives in the curriculum".

"As the flag can now be widely used by all businesses, it also means that many Blak businesses may struggle to compete with non-Indigenous companies profiting off the use of the flag," she shared with Mamamia.

A post shared by T A N N A (@teachingwithtanna)

Kirli Saunders is a Gunai woman, who is a storyteller, poet, artist, and teacher by trade. Kirli advocates for racial equality, LGBTIQA+ rights, and she was the NSW Aboriginal Woman of the Year in 2020. She also this week spoke with guest host Narelda Jacobs on Mamamia's No Filter.

Originally, Kirli says she was excited about the flag being released from the copyright agreements. And while this was an important moment, the flag still ended up in the wrong hands.

"I don't think we can talk about the flag being freed or celebrate freedom while there is no treaty and no government recognition of our sovereignty. We can't celebrate freedom amid the incarceration rates, our children being taken away and while our communities are dehumanised with lower education, health and employment outcomes than other Australians," she shared in a statement to Mamamia.

She continued: "It's symbolic to give the flag back to its people, but it has not been 'freed' and what we are experiencing is not freedom."

Northern Territory Senator Malarndirri McCarthy was the chair of the Senate Select Committee on the Aboriginal Flag Enquiry.

A Yanyuwa Garrawa woman, Malarndirri commended the people who gave evidence and advocated for the Aboriginal flag.

Speaking about the news, she said: "I'll be thoroughly examining the details around this deal through Senate Estimates next month, in particular the copyright and custodianship of the flag. The Coalition blocked Senators from allowing the flag to be flown in the Senate in 2020 during NAIDOC week. Perhaps now Scott Morrison will agree to this flag and the Torres Strait Islander flag standing alongside the Australian flag in the chambers of our Parliament."

Reply
Upvote
The Root cause was that the person who designed it copyrighted it and sold the copy right. I don’t understand why the frustration is not targeted at him. I need an explainer for that one. He could have gifted it to an indigenous group.
S
snorks 4 months ago

Reply
Upvote
1 upvotes
@mb1111 the problem is, which group do you gift it to? And if you gift it to them, you're stopping every other group from using the image.
M
mb1111 4 months ago

Reply
Upvote
@snorks I think that the article had some suggestions.
S
snorks 4 months ago