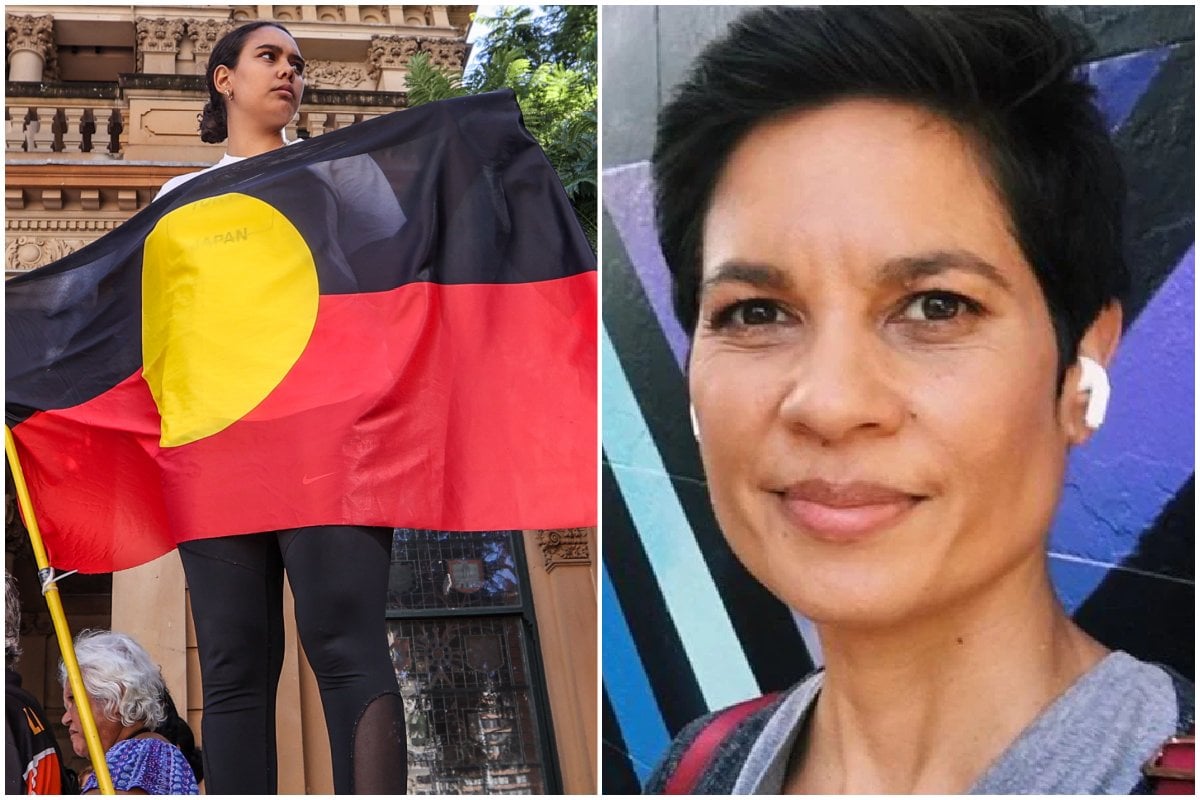 On Saturday, as tens of thousands of Australians rallied to mark 30 years since the Royal Commission into Aboriginal Deaths in Custody, flags flying overhead were at half mast, including the Aboriginal flag.

Not for the 470 people who’ve died in custody since the Royal Commission’s final report, but for sorry business on the other side of the world, for a man many believe epitomised colonisation and the systems that would see our Indigenous people incarcerated more than any other.

Our deepest sympathies are with the Royal family at this time. Prince Philip was their patriarch. Prime Minister Scott Morrison has sent condolences on behalf of Australians. Messages of love and respect have flowed from around the Commonwealth.

Apryl Day talk about the loss of her mother, Tanya Day. Post continues below.

While also paying tribute in the House of Commons, British Prime Minister couldn’t ignore the Prince’s infamous sense of humour. Boris Johnson laughed off the Duke’s many faux pas as an attempt to break the ice, saying “the world wouldn’t hold it against him”.

Does Mr Johnson consider it an ice breaker to ask if you still throw spears, or whether a posting in China would leave you with slitty eyes, or to be told you’re lucky not to be eaten in Papua New Guinea? Some might say nothing like blatant racism to calm the nerves and help you forget you’re in the presence of royalty.

At Victoria’s rally on the weekend, Senator Lidia Thorpe told the crowd, First Nations People did not consent to the flag being used to honour “our coloniser”.

Under those half mast flags, grieving families told harrowing stories of loved ones either dying alone in pain, while being restrained or by their own hand after going unmonitored for several hours. Many of those who died shouldn’t have been behind bars in the first place.

In stark contrast, Prince Philip died with the dignity we’d all wish for. At age 99, he slipped quietly away in his own bed, with his wife by his side, after living a full and privileged life.

Of course Prince Philip shouldn’t be denied a peaceful end. Similarly, he and his family aren’t personally responsible for the deaths in custody that have caused First Nations families so much pain and grief.

But Prince Philip’s passing, and the Royal Commission’s anniversary, presents a timely juxtaposition and an opportunity to reflect on our own place in the Commonwealth.

Listen to the latest episode of Mamamia Out Loud, with Holly Wainwright, Jessie Stephens and special guest Narelda Jacobs. Post continues below.

Before pointing out the flags at half mast, Senator Lidia Thorpe tweeted “Beginning of the end for our Colonisers”. It’s a sentiment echoed around the country.

A sign that we may be ready to cut the apron strings comes from the ABC’s TV audience. When crime drama, Vera, was interrupted by live coverage of Prince Philip’s passing, hundreds of people phoned to complain.

In the month leading up to the Duke of Edinburgh’s death, another five Aboriginal people died in custody. It’s been well noted, their deaths have largely been ignored and the circumstances unexplained.

On the Royal Commission’s 30th anniversary week, let’s ask ourselves why is one life worth more than another and then demand more is done to stop black deaths in custody.