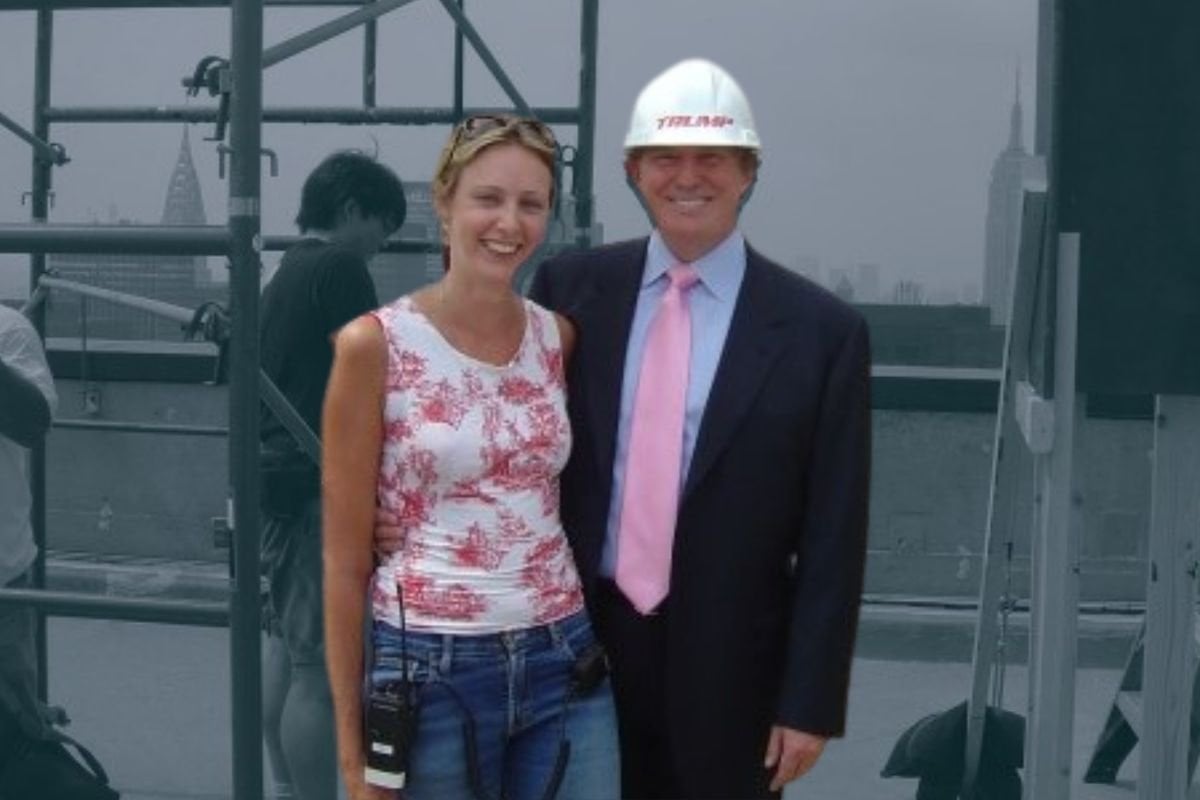 I have a dinner party story I’ve told over the years. About a man with grabby little hands.

This man tried to fill his hands with things… All kinds of things.

Today, he's a pretty big deal. He was a big deal back then because he had a reality TV show and liked to use his hands to fire people. About four years ago he became a bigger deal, and he’s an even bigger deal now. He uses his hands to sign things, and point at things and sometimes to attempt to hold his wife’s hand, but she won't let him most of the time. Who is this grabby hands man? He is the current President of the United States, and next week he's hoping to be re-elected for another four years.

Back in the day, I lived in New York.

And it was fun! Manhattan really is a place where anything can happen. 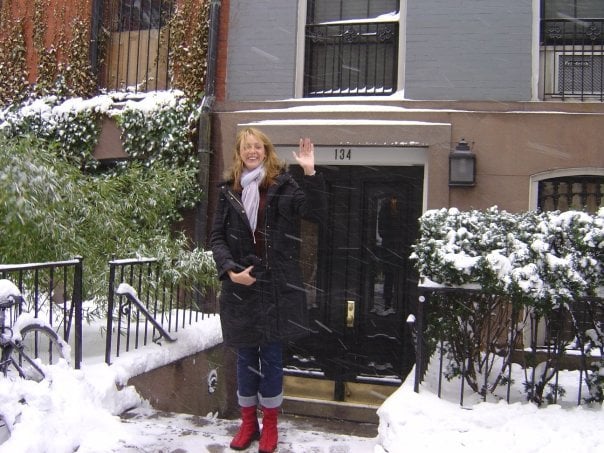 In early 2000 I was a young producer, living the dream, working in one of the most exciting cities in the world. I produced some pretty interesting things, but this shoot was a simple one day shoot on the top of Trump Tower.

The view was spectacular; all the way down to the bottom of Manhattan in one direction, past the Chrysler Building and the Empire State. Central Park and up to Harlem in the other. Absolutely gob smacking.

My first encounter with 'The Donald' as everyone called him then was over the phone.

There were the standard ‘celebrity’ logistics to co-ordinate on this shoot, and I had regular calls with his EA Norma. Norma was a formidable woman and struck me as a no nonsense type of person.

One morning Norma and I were on the phone discussing the minutiae of the shoot when she began scolding someone about a newspaper. I quickly realised she was speaking to ‘The Donald’. I could just picture her slapping his hand away as he reached for a newspaper on her desk.

We were to film on the roof of Trump Tower, which meant a few trips uptown to check out the location.

The Trump Tower lift stopped on a floor before the roof and we had to take the last few levels via the stairs.

The first time we were there, we stepped out of the lift and were making our way to the stairwell to climb up to the roof, and a door into Trump’s penthouse was wide open. We could see straight into his apartment.

All shiny marble and gold as far as the eye could see.

I remember my hilarious neighbour in the West Village, hair stylist to the stars, telling me once that Ivana had spoken of taking all the marble out of Italy to decorate the penthouse. And it sure looked like it.

The day of the shoot we were all set up on the roof, ready to go, and then… we waited.

While we waited we chatted amongst ourselves about ‘the hair’.

That hair was legendary and we all wanted to see the architecture of how it sat on his head up close.

We had been waiting for ages when suddenly he appeared out of nowhere, followed by a petite young woman who was wearing surgical gloves and carrying a make-up kit.

It appeared his make-up artist wasn’t to touch him unless she was wearing surgical gloves. I remember watching her trying to touch up his face with her hands in sweaty plastic gloves on a hot day. It's funny to think of now, when he resisted wearing a face mask for so long during the COVID-19 crisis. He won’t wear a mask, but no-one was allowed to touch him unless they wore gloves…

What was even more bizarre was the ‘TRUMP’ clearly printed out on a piece of A4 paper, cut out and stuck to the front of the hard hat he was wearing as a prop for our shoot.

We had offered to supply him with a hard hat through our wardrobe department but Norma insisted he wanted to bring his own. Unfortunately, that meant we wouldn't get to see that infamous hair after all.

The scene was him standing on a construction beam with the Manhattan skyline in the distance, delivering some lines to camera. We framed out the actual building so you couldn't tell he was only a few feet off the ground. 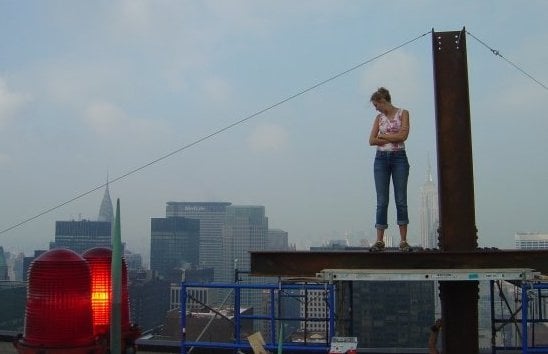 Jo on the top of Trump Tower. Image: Supplied.

We shot the scene, and that was that. After all the waiting, and setting up the shot, and waiting some more, it was over.

As everyone packed up, The Director jumped in, asking for a photo. The Donald and The Director both posed with the iconic ‘You're Fired!’ pose. Straight out of The Apprentice - hands and all.

Trump was about to walk off when The Director said ‘hang on, you need a photo with The Producer’.

‘Producer’... The word kind of rolled out of his mouth. Then his eyes locked on me. And his speech slowed down. ‘Ah, The Producer’.

He sidled alongside me, and put his hand just that little bit too high up my waist.

As we were smiling for the camera, suddenly his hand just crept up, and BOOM! He groped my boob. 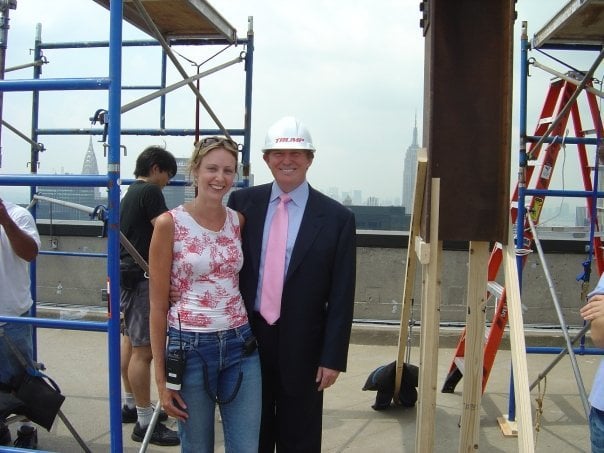 It was so quick, so swift, I was stunned.

Had anyone seen that?

Surely someone had clocked it?

But nope. It was so quick, blink and you’d miss it - and everyone missed his tiny hand venturing too far north of my waist.

So there I was, standing with this old guy. And we were on the top of one of his really, really tall, shiny castles. A tower, if you will, and he grabbed my boob. And that was that.

He walked off towards the door which would take him back into his apartment, while I stood on the top of Trump Tower, the crew packing up around me.

Years later a tape would leak of him saying: "You know, I’m automatically attracted to beautiful — I just start kissing them. It’s like a magnet. Just kiss. I don’t even wait. And when you’re a star, they let you do it. You can do anything…….Grab ’em by the pussy. You can do anything."

It seems me and my tiny boob got off lightly.