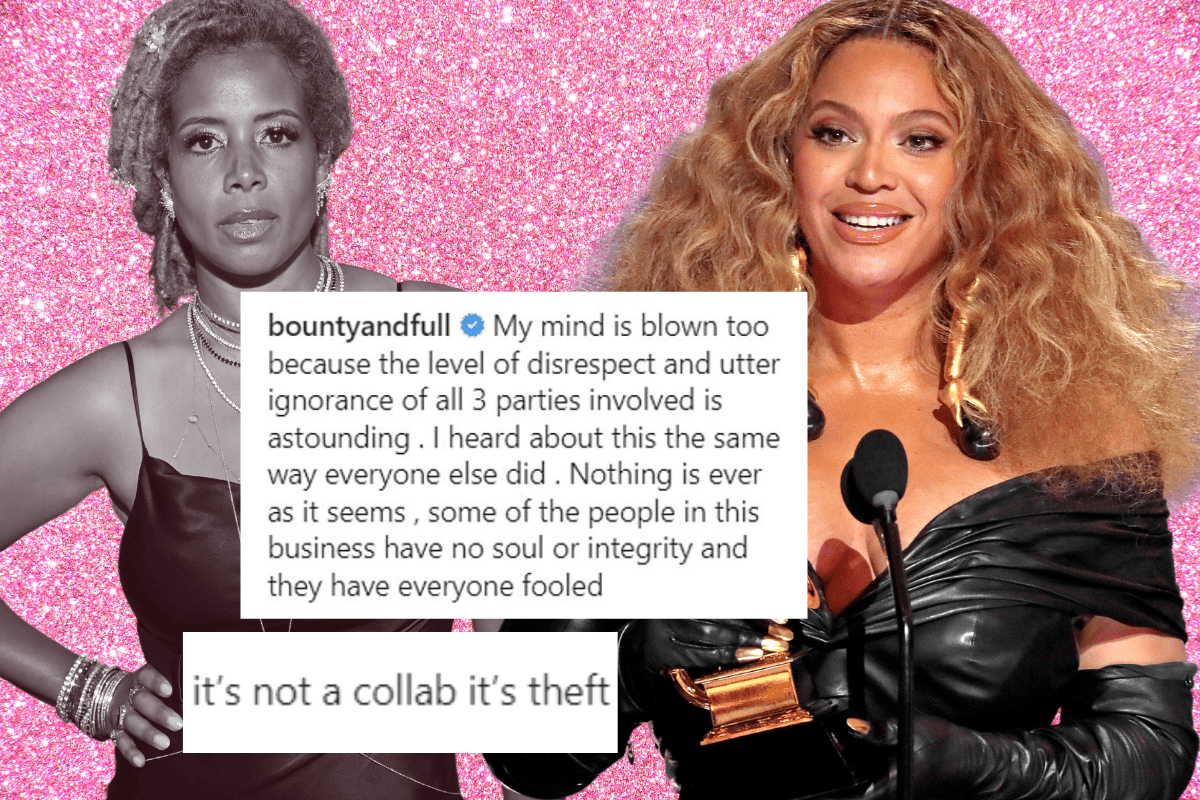 Do you have a minute? Googdgoodgood. Take a seat, because we need to unpack all the uncomfortable drama and noise surrounding Beyoncé's highly anticipated album, Renaissance.

The album, which was officially released July 29, 2022, is Beyoncé's seventh studio album – and it's arguably one of this year’s most anticipated releases.

This is Beyonce's first full-length album since Lemonade, which dropped in 2016.

Here, we look at everything you need to know about Beyoncé's new album Renaissance.

Kelis has slammed Beyoncé for sampling her track without permission.

You guys, Kelis is pissed. Like, she's not happy. At all.

The R&B singer has accused Beyoncé of "theft" for allegedly using a sample lifted off her 1999 debut album, Kaleidoscope.

According to Kelis, Beyoncé has featured her 1999 hit song 'Get Along With You' on the new Renaissance album, without her permission.

The two-time Grammy nominee said she only caught wind of the news after a fan account (@kelistrends) praised the new 'collaboration', captioning the post: "@Beyonce's RENAISSANCE album will include a @kelis sample on the song 'Energy'."

Kelis, who was completely unaware of the sample track on Beyoncé's new album, commented from her business Instagram account @bountyandfull: "My mind is blown too because the level of disrespect and utter ignorance all 3 parties involved is astounding."

The rapper-turned chef said: "I heard about this the same way everyone else did. Nothing is ever as it seems, some of the people in this business have no soul or integrity and they have everyone fooled."

In two follow-up clips on her personal Instagram account @kelis, the rapper addressed the situation, telling her followers: "The reality is that my real beef is not only with Beyoncé – she sampled a record, she’s copied me before, so have many other artists – it’s fine, I don’t care about that."

(Just for background, Beyoncé has previously been called out for similarities on the track 'Ring the Alarm' vs Kelis' 'Caught Out There').

Kelis continued in her Instagram post: "Not only are we Black female artists in this industry, we’ve met each other, we know each other, we have mutual friends – it’s not hard, it’s just common decency…”

“It’s just common decency, especially because I know what I own and don’t own, I also know the lies that were told, the things that were stolen, publishing that was stolen, people were swindled out of rights."

"It’s not about me being mad about Beyoncé – you’re all sheep! She’s one issue because it was stupid and disrespectful and she should've reached out."

"It’s about people like Pharrell and like Chad [who] is an amoeba, he’s spineless it’s a miracle he can keep his neck up. Pharrell does this all the time to me, it’s a direct hit."

“No one had the human decency to call me, the reason I’m annoyed is because I know it was on purpose. This was an on purpose direct hit, it was passive aggressive."

"So all you Beyoncé fans, knock yourself out. I’m not mad like that. I was not thinking about her or no one else – it has nothing to do with that. It has to do with the fact that from one artist to another you should have the decency to call and just reach out. That’s what you do."

"I don’t mince my words. These are facts, it is not opinion."

In a second Instagram Live, the rapper went on to discuss hypocrisy of Pharrell recently talking about artist's rights in an interview, before allegedly stealing her track.

She also criticised Beyoncé for preaching about women’s empowerment and just "talking the talk".

"We've got Beyoncé, who, like I said out of human decency as an artist and a female, all of this stuff she sings about, all of this empowerment, I don't talk about it I am about it, okay?"

"So the reality is, all of this female empowerment stuff, it only counts if you really do it. If you're really living it and walking the walk. Don't just talk the talk, it's real cute and fun to sing all these girls songs. Come on now, let's be real!"

The album was leaked early.

Beyoncé’s new album was leaked days before its official release date, with fans spotting copies of the album for sale in stores across Europe.

Fans in Europe are reporting that Beyoncé’s #RENAISSANCE is being sold in some stores prior to its release on Friday. pic.twitter.com/BxZdYT8KCL

Outraged Beyoncé fans – known as the Beyhive – took to social media to urge people not to share links and listen to the record before its official release date.

The promo video features a rare selfie of Beyoncé and Jay-Z's children.

Ahead of the release of the official release of her album, Beyoncé chucked up a teaser, sharing some rare photos of her family on her website.

In one image, the 40-year-old shares a selfie of herself lying in bed with her napping children – Blue Ivy, 10 and twins Rumi and Sir, five.

She wrote: “I want to give a special thank you to Rumi, Sir, and Blue for allowing me the space, creativity, and inspiration.”

She also shared an old snap of her mum, Tina Knowles, and her late uncle, who she also credits for her inspiration behind the new album.

"A big thank you to my Uncle Jonny. He was my godmother and the first person to expose me to a lot of the music and culture that serve as inspiration for this album,” she wrote.

Here is a special message from Beyoncé. #RENAISSANCE

Dedicated to her children, her husband, her family, her Godmother Uncle Johnny, and to the LGBTQ+ community and all of the pioneers who originated the culture and the fallen angels whose contributions have gone unrecognized. pic.twitter.com/hm6Om9fi52

Off the back of the album's announcement, Beyoncé also shared a picture of her wearing/covered in silver jewellery, sitting on a luminescent horse.

"I hope you find joy in this music," she wrote on Instagram.

Renaissance will be a "three act project".

Beyoncé also dropped a major hint about Renaissance being a multi-part project (oOoOo!), stating on her website that "this three act project was recorded over three years during the pandemic".

Fans have since been speculating whether this suggests three albums – or an album, a film, and a tour.

The singer also gave fans a snippet into the creative process of the album, writing: "Creating this album allowed me a place to dream and to find escape during a scary time for the world. It allowed me to feel free and adventurous in a time when little else was moving."

"My intention was to create a safe place, a place without judgment, a place to be free of perfectionism and overthinking. A place to scream, release, feel freedom. It was a beautiful journey of exploration."

She signed off: "I hope you find joy in this music. I hope it inspires you to release the wiggle, ha! And to feel as unique, strong, and sexy as you are. Love y’all deep."

Phew. We need to lie down.

Have you listened to Beyoncé's new album? What do you think about the Kelis 'feud'? Share your thoughts with us in the comment section below.