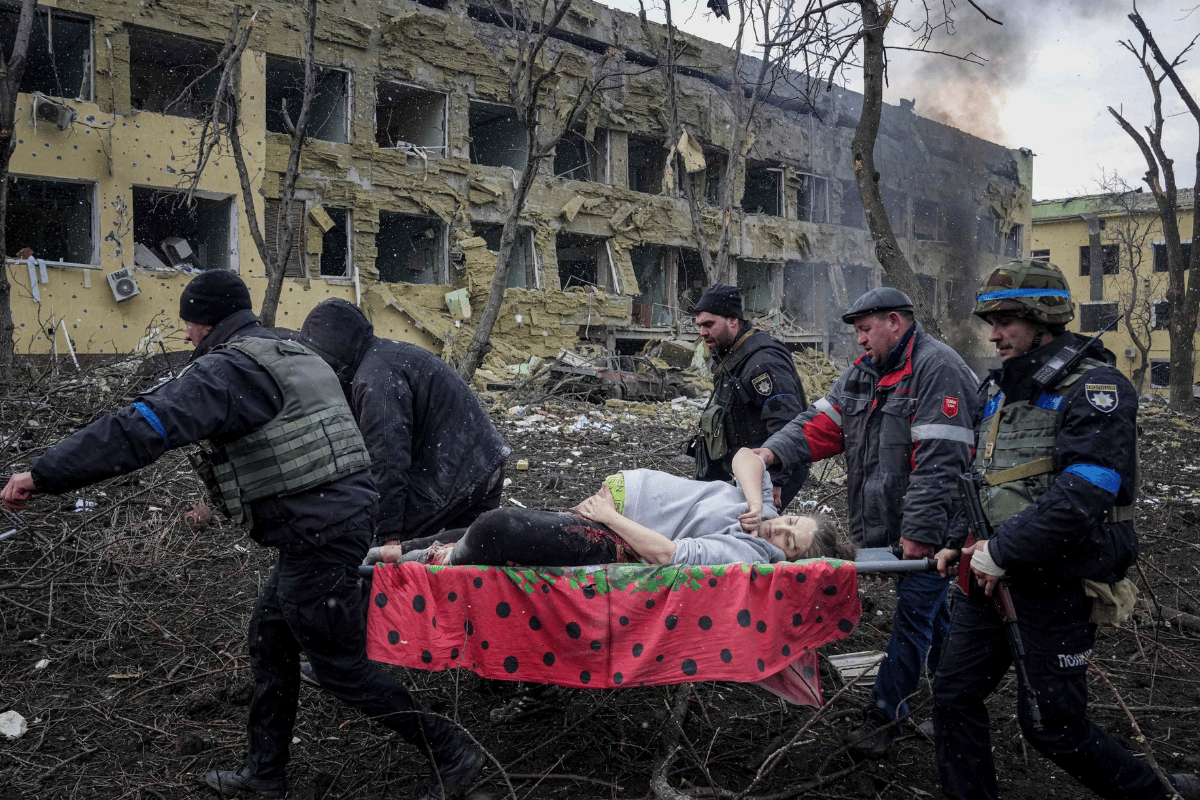 This post includes distressing imagery and could be triggering for some readers.

As Russia's invasion of Ukraine enters its third week, it is apparent that Vladimir Putin has little regard for civilian life in his bid to gain control over Ukraine.

In the last week we have heard of ceasefire negotiations between the two countries, with Ukraine trying to evacuate its citizens and bring aid through humanitarian corridors. But as each ceasefire attempt fails, there are reports of Russian forces opening fire on evacuation routes and creating a blockade, leaving hundreds of thousands of innocent people trapped in Ukraine.

Not to mention, we have seen countless instances of Russian forces targeting civilian buildings, hospitals and healthcare buildings.

For anyone witnessing these acts, it's seems that war crimes are now occurring in Ukraine.

A mosque in the southern Ukrainian city of Mariupol was shelled by Russian forces yesterday. It was sheltering over 80 adults and children seeking refuge.

The story of Mariana Vishegirskaya has also shocked many. The Ukrainian woman gave birth this week to a baby girl after fleeing a maternity hospital that was under attack by Russian forces.

She was one of many civilians and medical professionals caught up in Russia's airstrike of Mariupol hospital on March 9. The hospital was functioning as both a children's hospital and a maternity ward since Russia's invasion. The airstrike has killed at least three people, including a child, and injured over 17.

While receiving aid, Mariana was photographed by war journalists with a bloodied face, as she navigated her way out of the hospital's debris. Then after being taken to another hospital, where Mariana safely gave birth via a c-section, there was yet another airstrike on this hospital too. Mariana and her husband named their newborn daughter Veronika.

Images of Mariana Vishegirskaya, bloodied and heavily pregnant, were published around the world after a bomb dropped by a Russian plane hit the maternity and children’s wards in Mariupol pic.twitter.com/vfMtsMURJG

Mariana Vishegirskaya, a woman who was injured during Russian shelling of a maternity hospital this week, lies in a hospital bed with her newborn baby, Veronika. https://t.co/V2NcJPCtoO

In the same week as the attack on Mariupol hospital, Russia launched an airstrike on a psychiatric hospital in Ukraine's eastern region of Kharkiv. Luckily it resulted in no casualties, but the region's governor has called it "a brutal attack on civilians".

We have also heard the story of fourth-grade student Polina, who is just one of at least 71 children killed by Russian forces.

Polina was shot and killed in Ukraine's capital city of Kyiv in early March. She was trying to flee her neighbourhood with her parents and siblings via their family car, when Russian soldiers shot at them in their vehicle.

Polina was shot and killed in her family car in Ukraine's capital city of Kyiv. Her parents were also killed, and her two siblings are being treated for gunshot wounds. https://t.co/xXmB0hPgQV

Also among the death toll is seven-year-old Alisa Hlans, who was killed amid an attack on her city of Okhtyrka, close to the Ukrainian border. Alisa was in a kindergarten building in Okhtyrka, and the shelling killed five civilians in total. Amnesty International said the Russian military used widely-banned cluster munitions in the attack.

Another humanitarian blow has been the newborn babies affected by war.

As reported by The New York Times, there are 19 surrogate babies trapped by conflict in a Kyiv basement. Neonatal nannies have been caring for the infants in the secret location, as the hospitals are no longer considered safe.

“Of course we cannot abandon the babies,” said one nanny, who is caring for babies born to Ukrainian surrogate mothers and being sheltered in a basement nursery in Kyiv. Her husband and two sons, all soldiers in Ukraine’s army, have urged her to evacuate. https://t.co/nmLt8tfibS pic.twitter.com/xoXGfHrpqa

Understandably, examples like these have prompted outrage and anger from human rights groups and everyone watching on helplessly.

While facing worldwide condemnation, Russian officials then made several false claims that the Mariupol hospital had been taken over by far-right Ukrainian forces. Moscow then denied targeting civilian areas in what it calls a "special military operation" in Ukraine. Both these claims by Russia have been discredited by world leaders, reporters on the scene and Ukraine as a whole.

In times of war, it is considered a war crime to target civilians and civilian buildings, including healthcare facilities like maternity wards, hospitals and psychiatric centres.

A Ukrainian woman in labour is evacuated from Mariupol hospital after a Russian airstrike. Image: AAP. "We have not done and would never do anything like this war crime because we are people. But are you? What kind of a country is Russia, that it is afraid of hospitals and maternity wards and destroys them? Russian troops have not let our aid into the city and continue to torture our people ... tomorrow we will try again, try again to send food, water and medicine," Ukrainian President Volodymyr Zelensky said in response.

The World Health Organisation has said it has recorded 29 verified incidents of attacks on health care in Ukraine since the start of the Russian invasion on February 24.

It is not a war crime to attack military. But what could be suggested as a war crime is the intentional targeting of innocent civilians, as well as using warfare that is indiscriminate and not targeted, causing massive collateral damage.

There are also concerns over the types of weaponry Russia is using. As noted previously, the country has been accused of using widely-banned cluster munitions and ballistic missiles.

Amnesty International's Secretary-General Agnes Callamard said: "The Russian military has shown a blatant disregard for civilian lives by using ballistic missiles and other explosive weapons with wide-area effects in densely populated areas. Some of these attacks may be war crimes."

Amnesty International’s Crisis Evidence Lab analyzed digital evidence — including photos, videos and satellite imagery of indiscriminate attacks in #Ukraine. They have verified violations of international law which could amount to war crimes. pic.twitter.com/4HvPykiYVn

The reality is that people are tried for war crimes only after the war itself is over and the damage has been done. It's also incredibly challenging to land a conviction, as strong evidence is needed. Ukrainian officials have already begun collecting evidence and reporting on the alleged war crimes in a bid to build a succinct case in the future. But if Kyiv falls to Russia, protecting that evidence will prove a challenge.

It also comes down to intent and finding someone in command responsible. And all hands point to Putin.

"Very little is going to happen on the Russian side that would not be traceable right up to the chain of command, to the top of the Russian state," US war crimes envoy Stephen Rapp told Politico this week.

Listen to The Quicky: What will it take to end the war in Ukraine? Post continues after audio.

Of course, this isn't the first time Russia has been accused of war crimes.

The International Criminal Court's 2020 investigation into human rights atrocities in Russia concluded there was a "reasonable basis" to believe war crimes and crimes against humanity had been committed. But the court cited "capacity constraint" and "overextended resources" as obstacles to proceeding with a formal charge and conviction.

We have seen countless attacks on civilians in other parts of the world experiencing conflict too: Yemen, Syria, Afghanistan, the list goes on. And very few - if any - war crime convictions have actually been achieved.

So far, the United Nations has recorded 1,581 civilian casualties — 579 who were killed and 1,002 injured — since the start of the Russian invasion of Ukraine on February 24.

The UN report said: "Most of the civilian casualties recorded were caused by the use of explosive weapons with a wide impact area, including shelling from heavy artillery and multi-launch rocket systems, and missile and airstrikes."

As spokesperson Liz Throssell said: "We remind the Russian authorities that directing attacks against civilians and civilian objects, as well as so-called bombardment in towns and villages and other forms of indiscriminate attacks, are prohibited under international law and may amount to war crimes."

As we wait for the conflict to end and the dust to settle, with no clear idea as to when or how that will be achieved, it is the people of Ukraine - the innocent citizens - that are left to pick up the pieces.

It will take a long time to confirm whether or not war crimes have officially occurred in Ukraine.

But what's for certain is that targeting and bombing kindergarten classes, mosques, maternity wards, hospitals and psychiatric facilities are designed to hurt civilians. And Putin has unfortunately been successful in this instance.