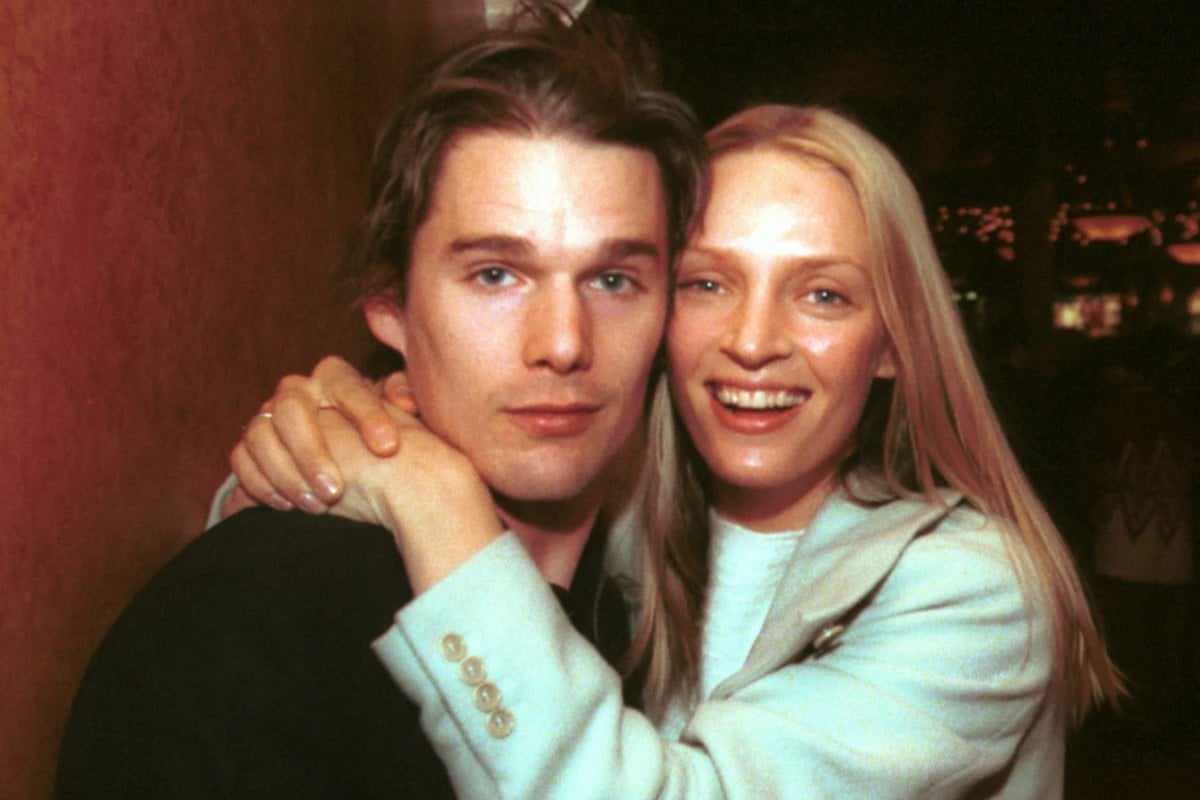 Ethan Hawke and Uma Thurman were one of Hollywood's 'It couples' in the late 1990s and early 2000s.

Thurman is best known for her roles in the Kill Bill movies, Pulp Fiction and Batman & Robin. As for Hawke, his big '90s hits were Dead Poets Society, Before Sunrise and later Boyhood.

Hawke and Thurman first met on the set of sci-fi film Gattaca in 1996. By 1998, they were married and had welcomed daughter Maya Hawke. Four years later in 2002, they welcomed son Levon.

But by 2003, the pair announced their separation, later divorcing in 2005.

When Hawke and Thurman announced their split, they didn't give a specific reason for the relationship breakdown - but the tabloid press had their suspicions. For years, there were rumours Hawke cheated on Thurman with their children's nanny Ryan Shawhughes.

Rather, Hawke blamed the stardom that surrounded Thurman for their demise.

"Uma and I did not split up over anybody's infidelity. We had a lot of problems before," he told 20/20 in 2004. "It's tough. You know you'd come up with these rules: 'One person works, the other person doesn't.' Well, then somebody's always out of town… 'OK, we'll all go away together.' Then I'm living in a hotel room taking care of my kids while you're off on a film set six hours a day doing what you love. Do that for nine months and see what a good mood you're in." 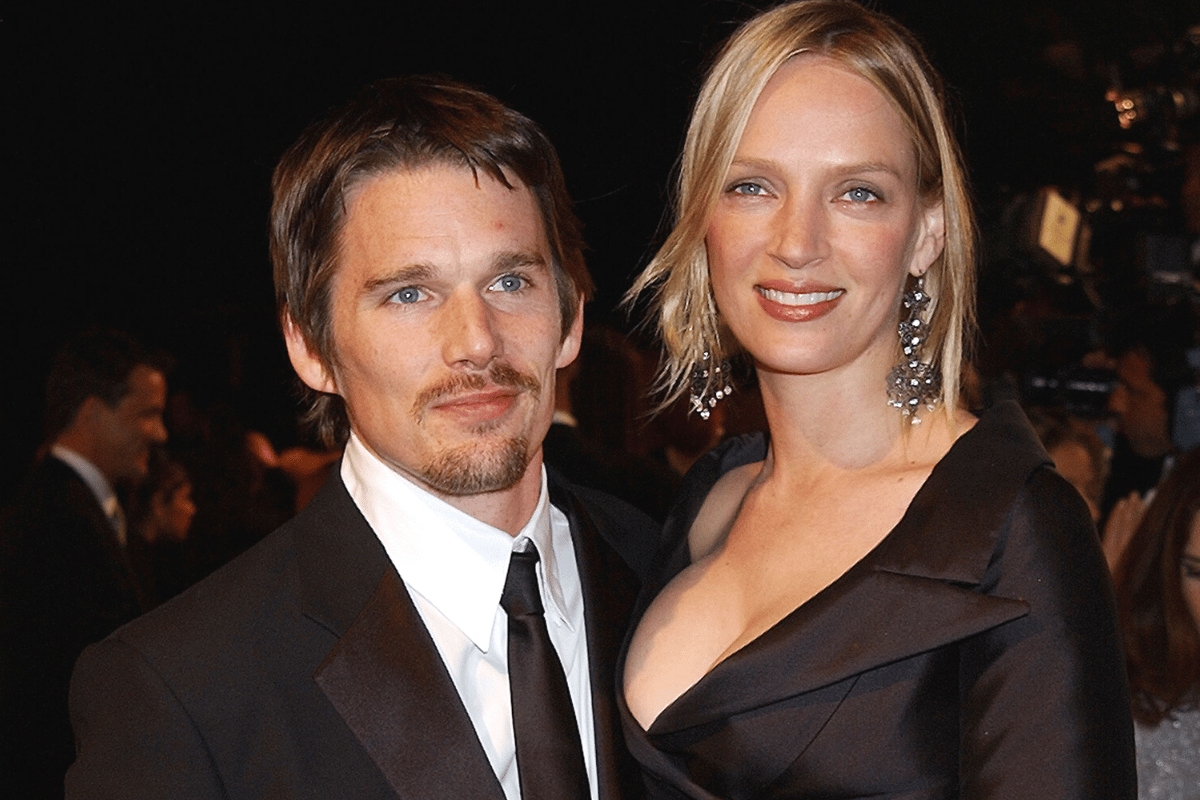 Ethan Hawke and Uma Thurman in 2002. Image: Getty. "It is very difficult for any couple who are married if both people are very ambitious... And our love got beaten up. I don't know if it's just too hard to be married to a woman that wants to be a movie star. I know that she has that right to want that."

Although Hawke strongly denied the rumours he had embarked on an affair with his kids' nanny, Ryan Shawhughes, he did end up dating her publicly from 2005 onwards - once his divorce from Thurman was finalised.

"After a short period of working for me, Ryan went back to Columbia to get her degree. There were never any scandalous thoughts or actions back then. In the years that followed, my marriage disintegrated due to many pressures, none of which were remotely connected to Ryan. I know people imagine some kind of Sound Of Music type love affair, but the truth is by the time Ryan and I were falling in love, it had been a long while since I had employed her," he told The Guardian.

That same year, they welcomed daughter Clementine Jane, and then in 2011, daughter Indiana. 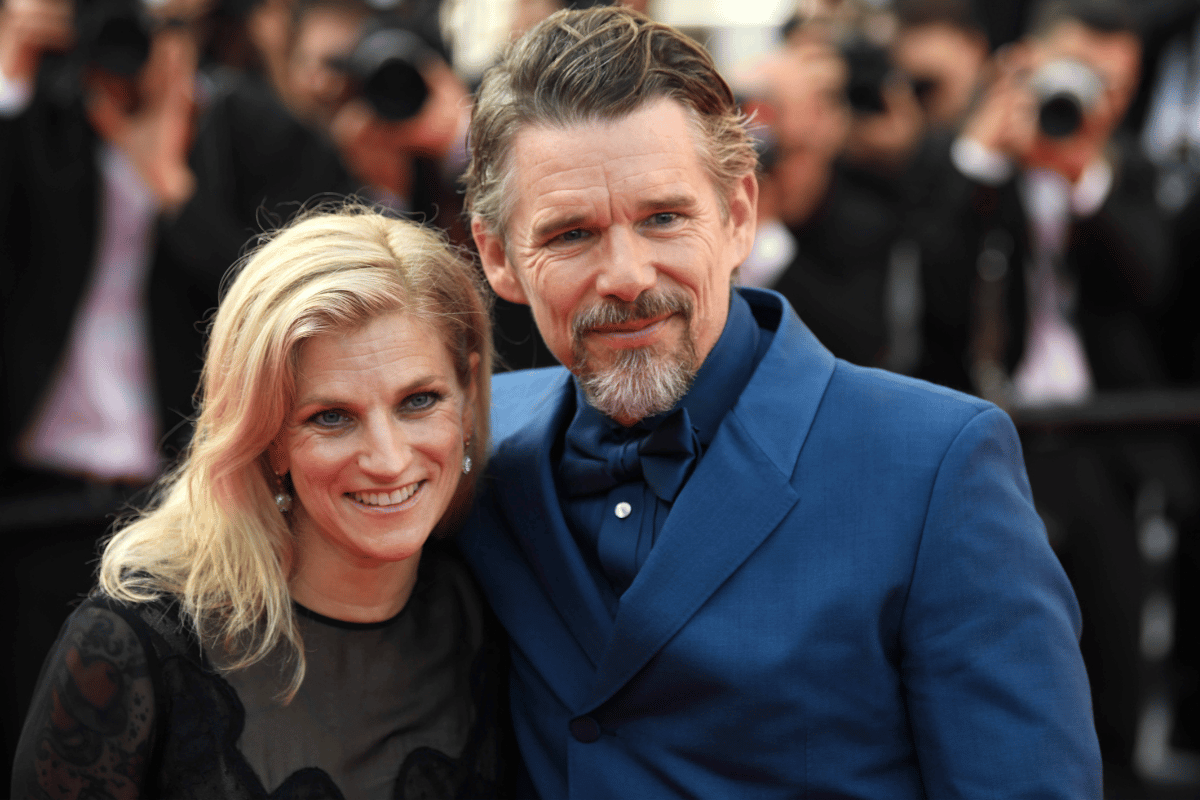 Ethan Hawke with his wife Ryan. Image: Getty. Speaking on his relationship with Shawhughes, he said: "She has been a wonderful, happy new mother, a great step-mother, a real instrument of healing in our family, and a much-needed partner for me."

Hawke and Thurman's eldest daughter Maya is now an actor, who is well known for starring as Robin Buckley in Stranger Things and also as Jo March in the 2017 BBC adaptation of Little Women.

Reflecting on his daughter's success, Hawke said on The View that he's excited about what her future holds.

"I'm so proud of her. She's a really talented, serious young woman," he told the TV show.

Hawke and Thurman's son Levon has also starred in Stranger Things. As for his two youngest daughters, they're in their teens and at that stage where they haven't cottoned on to Hawke's fame just yet, he said.

"My 13-year-old saw the Moon Knight trailer and all of the sudden my being an actor was real to her," he told People.

"She watched it on her phone, she's like 'Dad, this looks really good.' I mean her eyes just went [wide]; she couldn't believe it. 'That's what the kids at school are talking about.' So this is the first one that [impressed] her."

These days, Hawke feels like he is on the last leg of his acting career.

"I've definitely made the turn from being an old young person to being a young old person. I prefer this," he said to Indie Wire recently.

"I know I only have so many movies left. You have an awareness of time. When I was younger, I was like, 'I'll do this, I'll do that, that'll be a good learning experience, and then I'll try this,' thinking I had all the time in the world. Now, I'm like, 'I didn't learn anything from that one or that one, and that one would've been better spent in three months with my family'."

Since 2010, Thurman has appeared in very few movies.

For many years, Thurman and director Quentin Tarantino had an interesting work relationship - Tarantino once saying Thurman was his "muse".

It was only later on that Thurman discussed the tensions that had occurred behind the scenes. In one of her Kill Bill movies, she performed a car stunt at the persistent request of Tarantino.

But during the stunt, she accidentally crashed into a tree - suffering what she said was permanent neck damage, a concussion and damage to her knees. After Thurman's serious injuries, the pair never worked together again.

Thurman also revealed that after the car accident Hawke told Tarantino "that he had let Uma down as a director and as a friend". Only recently did the pair become friends again, with Tarantino publicly expressing his remorse over the incident.

Watch: Uma Thurman on the car crash cover-up on the Kill Bill set. Post continues below.

Last month, it was announced that Thurman and her daughter Maya Hawke would be starring together in an upcoming dark comedy thriller called The Kill Room, alongside Samuel L. Jackson. Thurman has also just been announced as one of the upcoming recipients of a star on the Hollywood Walk of Fame.

After her split from Hawke, Thurman went on to have another child.

In 2007, she started dating French financier Arpad Busson. The pair got engaged in 2008, but called off the engagement in 2009. But by 2012, they had reconciled and soon fell pregnant, welcoming daughter Luna Thurman-Busson in that same year.

A source later confirmed they had called off their engagement for the second time in 2014.

She is yet to speak publicly on the relationship, but has said in the past that she doesn't like commenting on her romantic life for the sake of her family.

Reflecting on how proud she is of her three kids, Thurman said: "I'm madly in love with all of my children and very proud of them. I think they conduct themselves with a lot of dignity and respect for others. It's all a parent could dream of."

Ethan Hawke and Uma Thurman reflect on their relationship.

In the wake of the divorce, Thurman spoke to Oprah Winfrey about the cheating rumours that dogged their marriage.

"It's extremely hard, and it's hard on the whole family," she said. "You're a family, and then you're not a family in the same way. Our marriage failed. I should take full responsibility for the failure of my own marriage. Blaming anybody doesn't make you feel any better."

For Hawke, he told GQ in 2018 that the divorce period was one of the hardest things he has ever gone through.

"I got divorced and my personal life fell apart," he said.

As for how their kids feel about the divorce, daughter Maya said she learned a lot from the experience.

"You know, my parents' divorce was really interesting and difficult in a lot of ways, but one wonderful thing that came out of it is that we don't take one another for granted," she said to As If Magazine.

"Every weekend is a special weekend because there's a high value placed on time spent together. You no longer have a feeling of infinite time; you quickly realise it's borrowed time."

"Through the failure of my first marriage, I learned a lot about myself. Until you know yourself, you don't know how to share your life with another person," Hawke said to Elle.

Hawke said that at the time, his and Thurman's lives were running a million miles an hour - something that brought them even closer together. But looking back, he thought they were too young to marry.

"The world felt out of control. I thought marriage would decrease my variables or something. I was absolutely wrong. There was this discovery that the male brain isn't done until 28. I definitely think my frontal lobe was not finished. I had no business taking vows that would last more than two weeks."

As for Thurman, she said the divorce made her a stronger person.

"Going through my divorce, I had to keep it together for them [my kids]. They needed that sense of security. It took me several years to recover from my divorce, but I’ve found a good rhythm to life now," she told Woman & Home in 2019.

"I'm happier now than I've ever been and I feel much less jaded than I used to. Everything that I've been through in my relationships has actually left me more independent and more self-assured. And, with a great sense of humour! Despite everything, I'm a romantic."