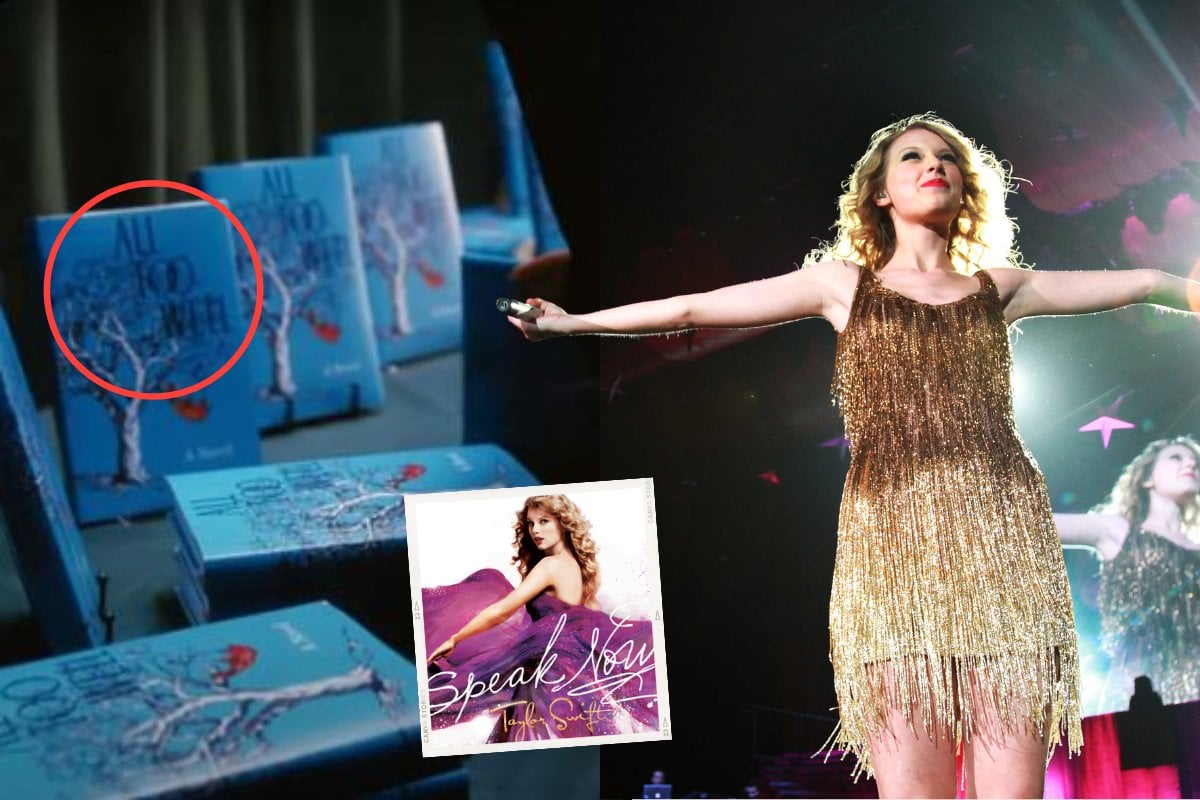 I'm not saying Taylor Swift and the Easter Bunny are the same person, but has anyone ever seen them in the same room?

The popstar is the Queen of the Easter egg, dropping hints and clues about what she's up to in pretty much anything she releases, whether that's a new album, a documentary or just a tweet. It always sends fans into a spiral and has led to them dissecting... literally everything she does.

Taylor could sneeze and someone would argue that the decibel level was 13.

Many new Easter eggs have now come out of Red (Taylor's Version), her second re-recorded album release on her quest to own all of her music.

Here are the theories:

In the end of All Too Well: The Short Film, Taylor - playing "her" - has turned the story of her relationship with "him" into a book, which fans think could suggest a career pivot. 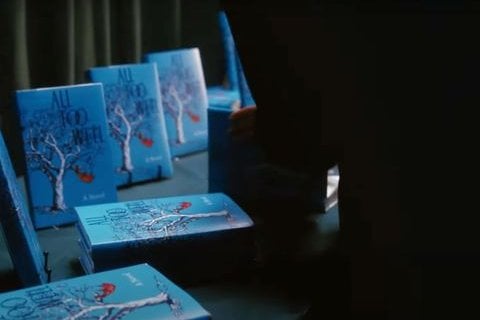 Whether it's a biography or fiction novel remains to be seen, but there are other clues.

In 2015, Taylor said she plans her life about two years ahead of time. Although two surprise pandemic albums probably threw that whole approach out the window, a book doesn't seem too left field for a prolific songwriter like her.

That same year she told GQ she wrote a novel when she was 14 called A Girl Named Girl, about a woman who has a daughter but wants a son, and she's been holding a trademark for that title ever since.

With two re-records done, and Taylor already owning her last three albums Lover, folklore and evermore, she now owns more than half of her discography, which is a big milestone.

She still has four albums to re-record before finishing the project, though: her self-titled debut Taylor Swift, Speak Now, 1989 and reputation.

She's probably had the order of re-records planned since the moment she decided to do it, and it seems like she's been dropping hints.

She's legally unable to record reputation until its five years old, which is not until November 2022, so we can rule that one out for now. Debut is likely to come towards the end too, because it's her least anticipated release, leaving us two to choose from: 2010's Speak Now and 2014's 1989.

And she's being tricky as hell, pointing at both of them.

The entire premise of the 'I Bet You Think About Me' vault track music video is very similar to Speak Now's title track, which is literally (a made-up story) about crashing a wedding.

The cover of the book in the All Too Well short film has a tree that looks a lot like this set from the Speak Now tour: 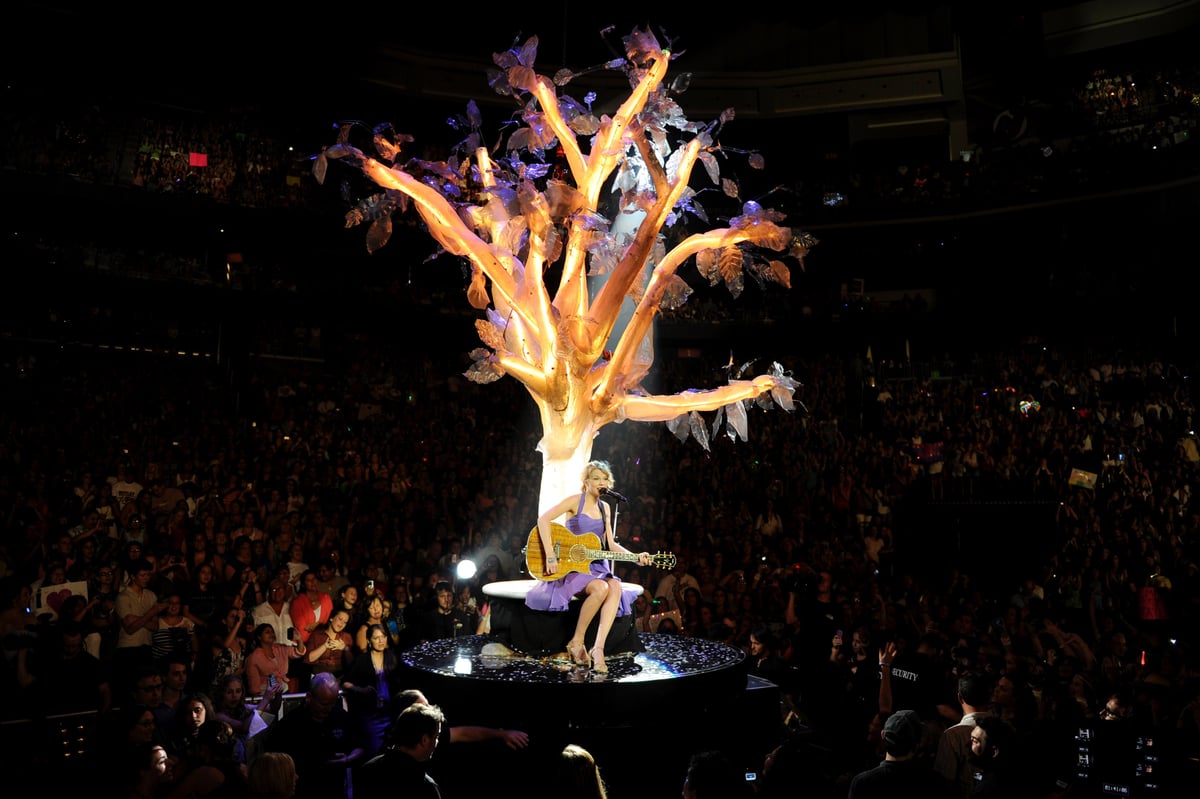 She also sold signed CDs on her US site for $20.10, which is the year Speak Now was released. The purple font matches that album's cover. 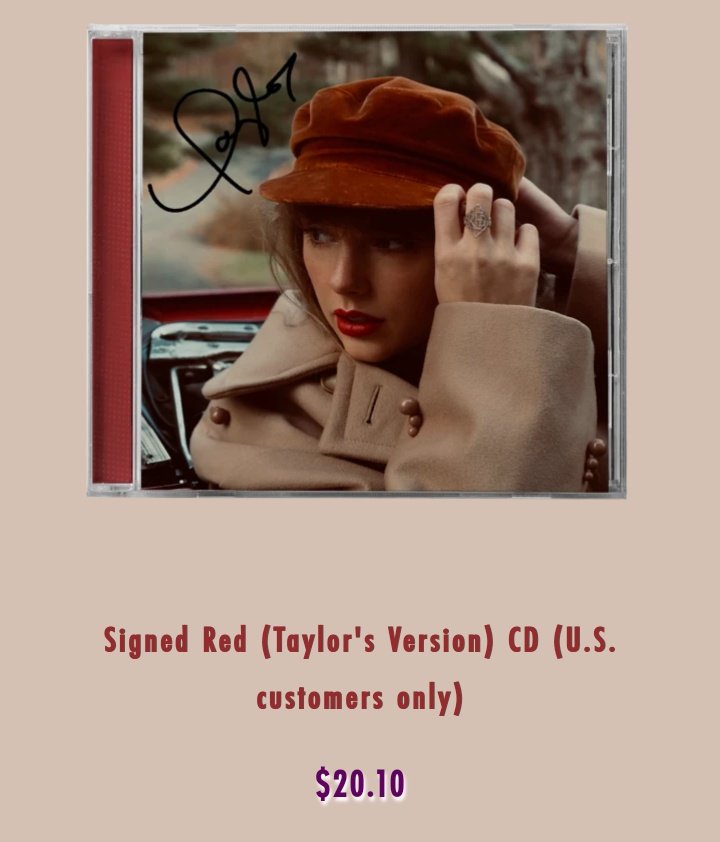 The car in All Too Well: The Short Film is a 1989 model, and there are references to her most commercially successful album throughout the 'I Bet You Think About Me' music video. 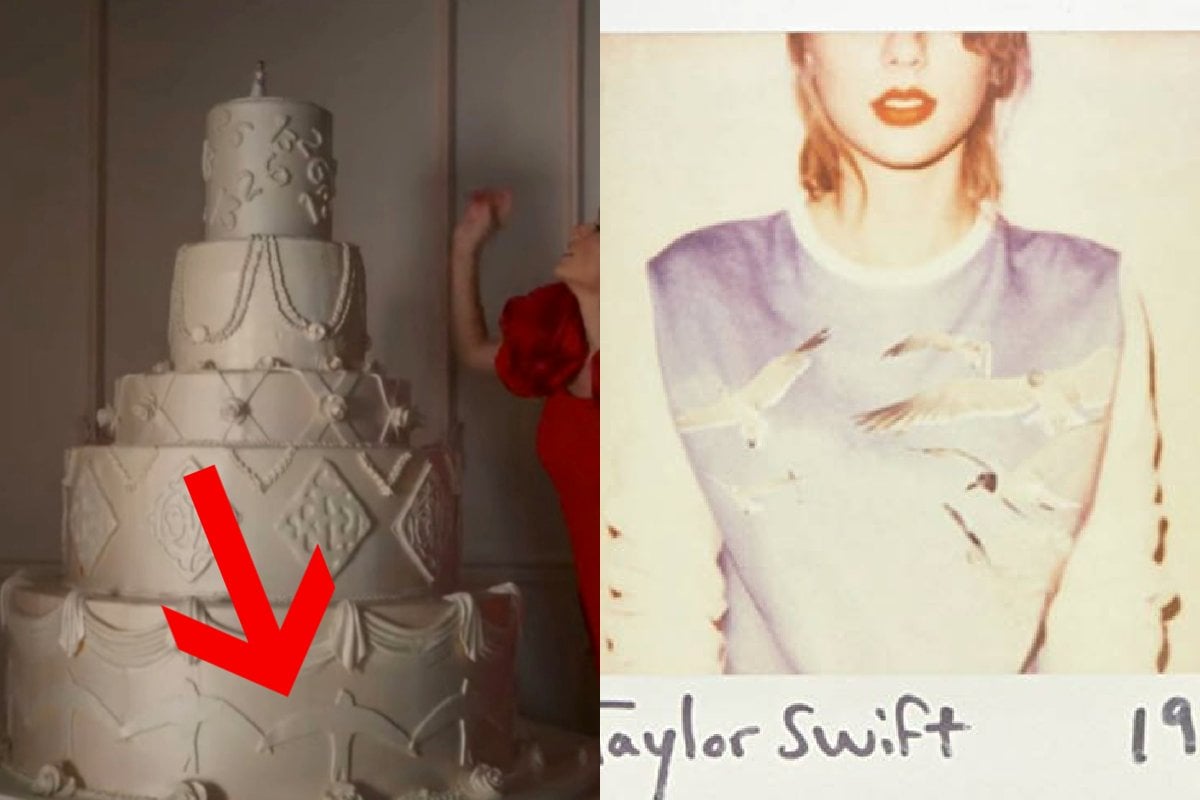 Personally, I think Speak Now is next because certified banger 'Enchanted' is already a trending song on TikTok, and she'd probably give it a smaller rollout before going huge again for 1989.

When Ed Sheeran released his album = on October 29, he said there was a remix of the song 'The Joker and the Queen' featuring an American artist on its way.

The most likely person for this is Taylor because they're besties and frequent collaborators, but also because of this from his 'Overpass Graffiti' music video: 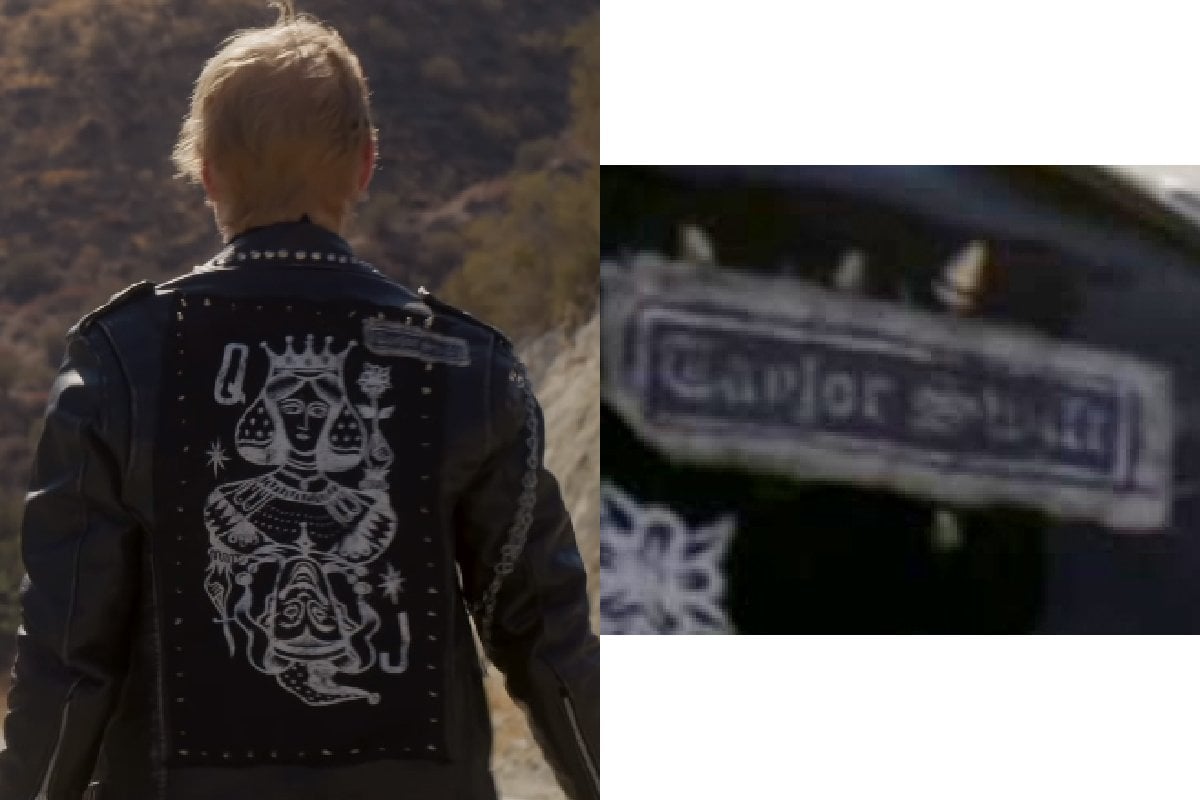 Taylor then seemed to hint at it herself in this shot from the music video for vault track 'I Bet You Think About Me': 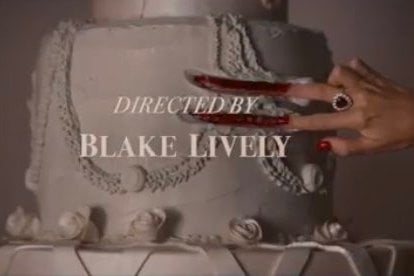 While everyone is busy debating and making memes about a decade-old breakup, Taylor and her boyfriend of five years, Joe Alwyn are just... out there somewhere, living their lives away from the public.

Since 2017's reputation, most of Taylor's biographical music has been about her relationship with Joe, but neither of them speak about their relationship publicly or are even see together often.

So given all this, fans think that one day she'll just pop up online and be like, Oh yeah, hi, I got married like 6749765 months ago".

Firstly, there are lyrics from 2019's Lover album, such as "My heart's been borrowed and yours has been blue, all's well that ends well to end up with you" from the title track and basically the entirety of 'Paper Rings', which chorus includes: "I like shiny things but I'd marry you with paper rings".

Then there's this from the Miss Americana documentary, showing a ring on her left hand: 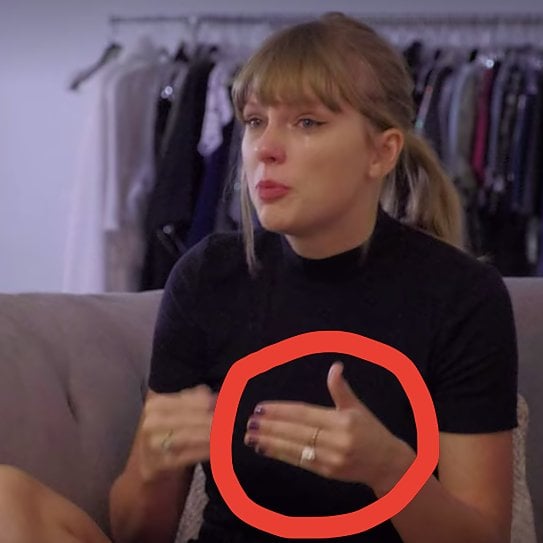 Though others think this looks more like a cat ring than a giant rock, which seems... very Taylor.

In folklore track 'invisible string' she sings: "One single thread of gold ties me to you", which some interpreted as a ring.

Then with the release of Red (Taylor's Version), she made an entire music video about a wedding even though the song isn't about marriage at all, which has reignited this rumour.

Even if she and Joe are married, I doubt we'll find out anytime soon. Taylor's been open about how the invasiveness of media and paparazzi has impacted her past relationships, and she and Joe seem intent on keeping their privacy.

Good on them, tbh.