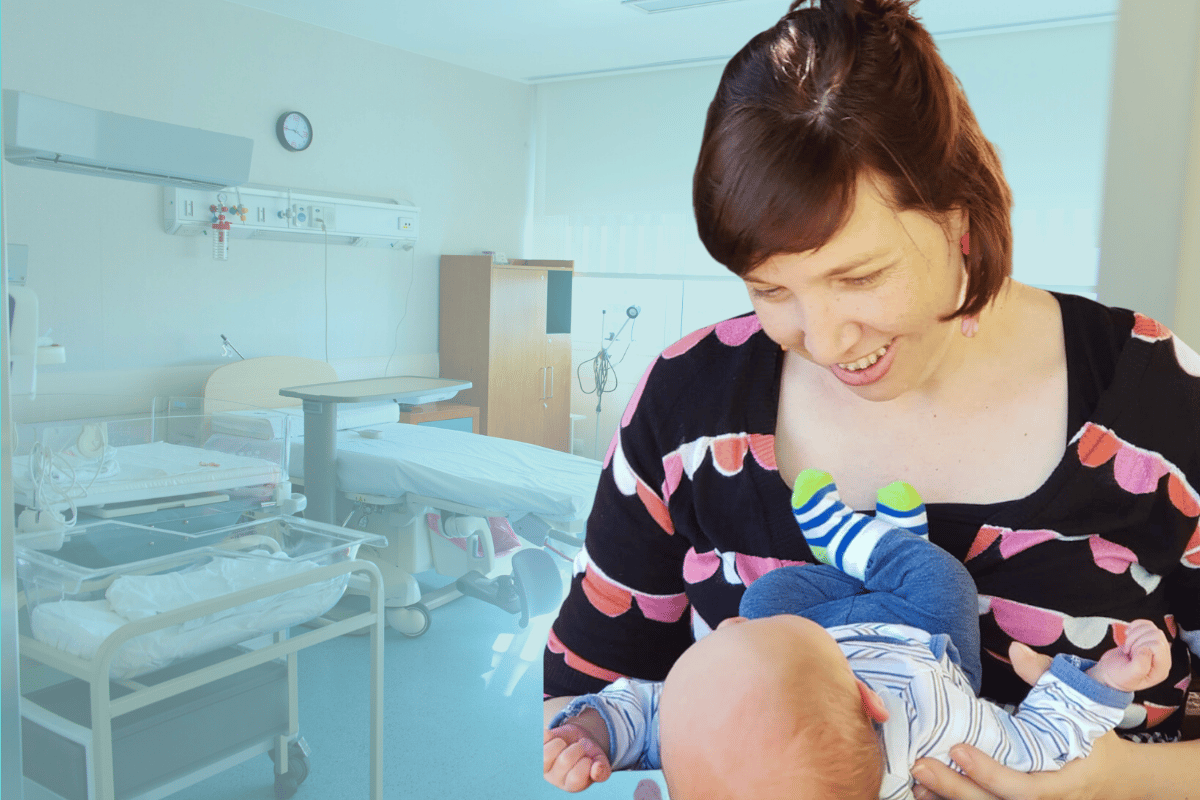 Birth: there's nothing quite like it, and it's clear no two birth stories are the same. Which is why we're asking everyday women and some of our favourite celebrity mums to share theirs, in Mamamia's My Birth Story series. To share your Birth Story, email [email protected] with ‘My Birth Story’ in the subject line.

This week, we hear from Cate Gilpin from Brisbane, who is a mum of two boys.

When I was pregnant with my first child (now seven) I was determined to have a ‘perfect’ birth and I had a very fixed notion about what that was and how I would achieve it.

I did my pregnancy yoga weekly, read everything I could find about calm birth, and pored over my Juju Sundin Birth Skills book until it was stained with tea spills and pasta sauce flecks.

My plan was to labour at home for as long as possible and then head to the hospital when I was almost fully dilated. I would arrive just in time for a midwife-led water birth during which I’d use yoga breathing, a playlist of soothing tunes and my loving husband’s hugs and hand holding as my only forms of pain relief.

Yes, I was very naïve and, yes, my plans fell to pieces very quickly.

My birth was almost the exact opposite of this plan from start to finish: the finish being the discovery that my son’s heart rate was dropping, the umbilical cord had wrapped tightly around his neck and an emergency c-section was required immediately or we’d lose him.

Thankfully Eddie arrived safely into the world and we were both physically okay.

I had some mild birth trauma, it felt pretty awful at the time but since then I’ve seen friends suffer with truly debilitating birth trauma and that wasn’t my experience.

But I did feel terribly sad and confused that my birth had been so different to what I imagined. Mainly, though, I felt shame.

Even though I felt no judgement towards other mothers who birthed via c-section, I judged myself. Combine this with major breastfeeding issues (which I’ve written about on Mamamia) and I was convinced that I was a terrible mother who’d utterly failed at the first hurdle.

The difficulty of my first birth, combined with the general difficulty and occasional horror of being a parent meant it took me four years to feel ready to try for another child.

When I fell pregnant with our second son, I knew I wanted to have a very different birth, but I also felt a lot of social and sometimes medical pressure to try and have him vaginally. This is called a VBAC (vaginal birth after caesarean) and it was regularly mentioned to me by every medical practitioner I saw.

I knew I didn’t want to do this, but the thought of choosing to have a caesarean brought back those feelings of shame and failure all over again, like I was too lazy or too selfish to birth vaginally.

I also believed others would judge me, and I have to say, lots of people did.

On this episode of The Delivery Room, we learn all about a planned C-Section. Post continues after audio.

There are so many loaded words around birth.

Natural is always used to describe a vaginal birth, even if birthing ‘naturally’ would result in physical or emotional trauma for mother and/or child.

Drug-free is another loaded term with lots of judgement directed at mothers who found the pain too overwhelming and chose an epidural or pethidine.

And the term elective caesarean is used to describe someone who has a booked in c-section in advance, and seems to hint at the idea that mothers are just casually making the decision to have major surgery – completely disregarding the multitude of legitimate reasons mothers might need or want to do this.

I prefer the terms vaginal birth and planned caesarean, and I don’t think it is anyone’s business whether a mother has pain relief, In fact, I don't think this question should even be asked.

I knew early in my pregnancy with Walter (my second son) that I wanted to have a planned caesarean, but I felt a general pressure that a vaginal birth was what a ‘good mother’ who wanted the ‘best’ for their child would do.

Phrases like ‘too posh to push’ ran through my brain constantly, and if I ever got into a conversation with someone about caesareans, I would always insert my first birth story in the conversation as some kind of justification for considering a c-section.

One woman I knew – only in a professional context – heard that I was planning to have a c-section and decided it was appropriate to send me articles on my baby’s microbiome and how a caesarean could potentially affect it.

This idea that my mental and physical health, and my needs as the mother birthing (and then raising this child) would be secondary to my infant child’s microbiome (the research is out on the benefits of vaginal birth for microbiome anyway) is so disturbing it still makes me want to cry.

After extensive discussions with my husband and my midwife, I made the decision to have a planned caesarean. It was absolutely the right decision for me and for my baby.

I felt so much calmer knowing when my son would be born, my husband and I were able to plan for the care of our elder son, and I knew I would be in hospital for a few days at least following the birth and was therefore prepared.

And in the end: it was a wonderful birth – I felt prepared, surrounded by love and support and most importantly, like I had complete agency over my birth and had chosen the best option for my family and I.

To share your Birth Story, email [email protected] with 'My Birth Story' in the subject line.