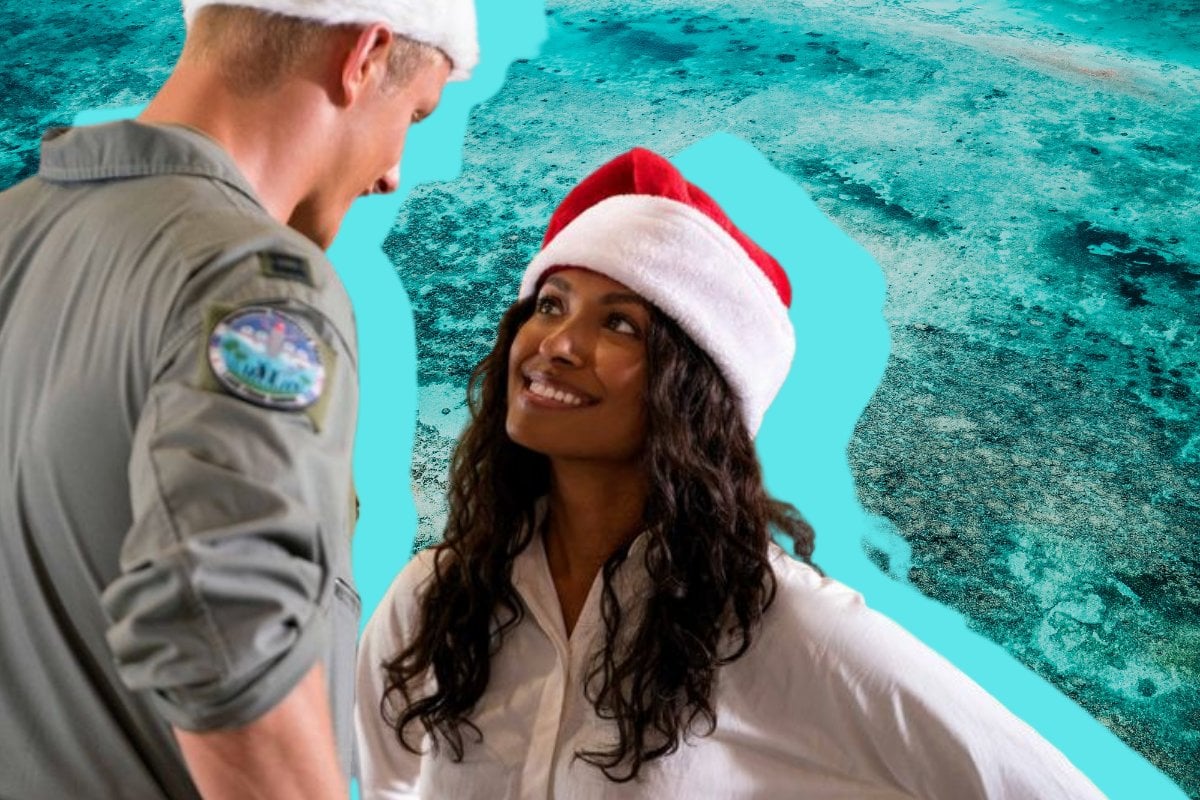 Another so-bad-it's-good Netflix Christmas movie is here, and it's set on a tropical island.

Operation Christmas Drop opens with some very typical North American Christmas shots and Erica (played by Kat Graham... who also played the woman with the magic calendar in another very bad Christmas movie) doing Christmas shopping for her congresswoman boss.

Oh no... a nice looking Air Force captain was pictured in a Guam newspaper article with a Santa hat after a 'Christmas Drop' mission and apparently that's... a bad thing?

OH. We're in Guam, where it's hot and tropical and pretty. 'White Christmas' plays over the top, because comedy.

The generous Air Force dude is singing to his family over Zoom (this is... too real) and then he and his friends talk for the sole purpose of letting us, the highly engaged audience, know there's a Christmas fundraising party coming up soon.

Back in DC, Erica's boss tells her she needs to go to Guam because spending taxpayer money on 'Christmas Drops' is... frivolous, or something, so they might need to shut down an airforce base on GUAM. You know, one of the important and strategic US military bases in the world.

She's like, 'Okay, I could enjoy January on a tropical island' and the congresswoman is like 'No, we need to ensure children in Micronesia don't have any joy ASAP'. So she has to give up her Christmas and fly there now.

Erica's dad calls to express his disappointment that she'll miss family Christmas again, and we learn she hasn't been around since her mum died. So there will be some great personal realisation about grief and family within the next hour, I reckon.

Okay, so we're all in Guam now.

I've just realised Air Force Captain Andrew is CATO from THE HUNGER GAMES and that explains why I feel an irrational hatred. Will attempt to push through it.

Cato Andrew is told by a superior they are facing closure and he's like, 'we're the most strategically important place in the South Pacific' and THANK YOU. THIS MOVIE SHOULD'VE PICKED A MILITARY BASE SOMEWHERE ELSE. LIKE LITERALLY ANYWHERE ELSE.

Anyway, Andrew is tasked with showing the Washington congressional aid around. 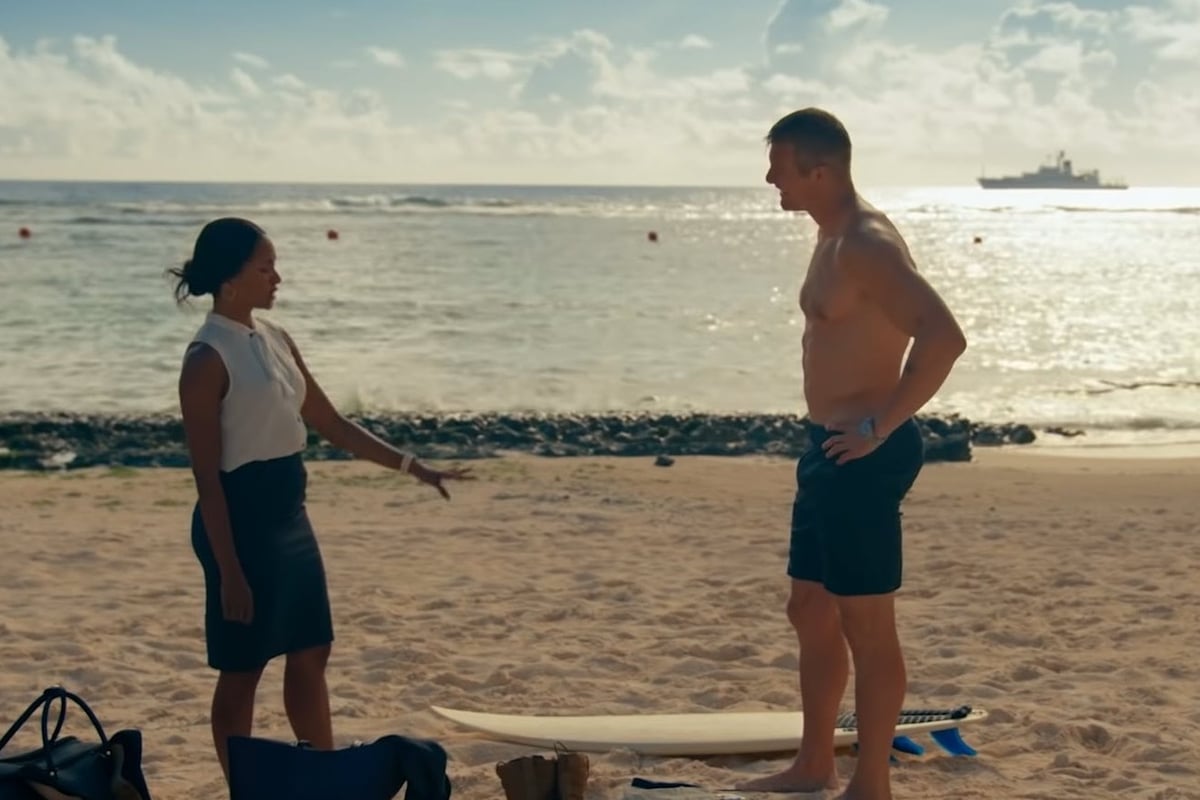 For reasons that remain unclear, he is suddenly shirtless and walking down a beach with a surfboard. Erica is there and goodness, we expected the meet cute to be a bit more... subtle.

He introduces himself and she says she recognises him. From that newspaper article about him being a massive nuisance by... helping children.

We learn Andrew's call sign, what he's known around the base, is CLAWS (but not Clause, because that would be too on the nose).

Basically these two don't like each other, which means they're going to fall in love in... *checks watch* 40 minutes time.

Why is there a (very unconvincing) CGI gecko in Erica's room? 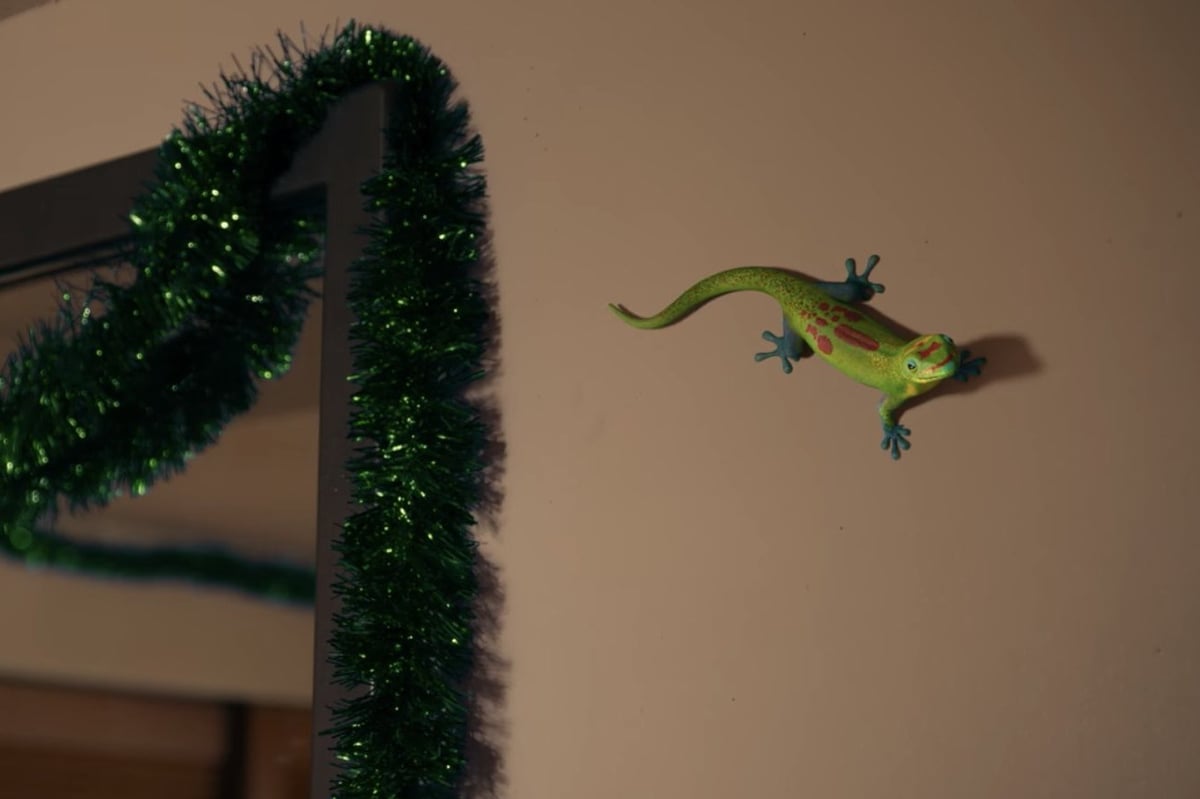 Has the person who CGI'd this gecko ever... seen a gecko? Image: Netflix.

AND WHY IS SHE TALKING TO IT?

Andrew shows wannabe Eliza Thornberry around the island, and they make a detour to the beach where Erica... just drives off without him.

He runs back to base, finds his jeep and heads to the warehouse where they keep all the Christmas drop stuff. Erica is there too because she left her phone in his car so she could track him.

Are we supposed to... like this character? I detest her.

Andrew explains Operation Christmas Drop is made possible through donations and conducted during flight training, so the hours are already budgeted. Basically, it costs the American taxpayers nothing and Erica can say she's "not the grinch" as much as she likes, BUT SHE'S LITERALLY THE GRINCH.

Erica has a call with her congresswoman boss - also a grinch - who pressures her to write negatively about the base.

She meets up with Andrew, who takes her on an 'errand' to an island in the Federated States of Micronesia. They meet one of Andrew's friends who explains that since a typhoon, the island's school has been out of commission.

She then offers the children all the items in her handbag before actually just giving them her whole bag.

"You can put your seashells in it," she tells them.

Andrew then sings a Christmas song and plays a ukelele and suddenly Erica is... definitely in love with him.

IT WASN'T EVEN THAT GOOD OF A SONG BUT OKAY.

They go to check out where the island throws a yearly fundraising party and have a ~deep and meaningful chat~ about how Erica's mum died and she likes to remain busy at Christmas to forget about it.

OOH goodness there's some tension there. It's not quite sexual tension because there's nothing remotely sexual about this movie but it's like... nice tension.

A call from work has Erica torn between hustling her report to get the promotion she wants and not ruining a bunch of lives.

They look at colourful fish and I find myself jamming along to a song that says 'I saw Santa in his bathing suit' so... let's move on.

OH. It's time for the party.

Erica does that thing that every woman does where we make assumptions about a dude having a gf or being a f***boy in order to get someone who knows him to spill all the info and it works - he's single and got his call sign CLAWS because he... 'Can't Leave Anyone Without Santa'.

This woman basically explains Andrew has a major white saviour complex and Erica's suddenly more attracted to him than ever because wow, we love a grown man with an obsession with Santa. 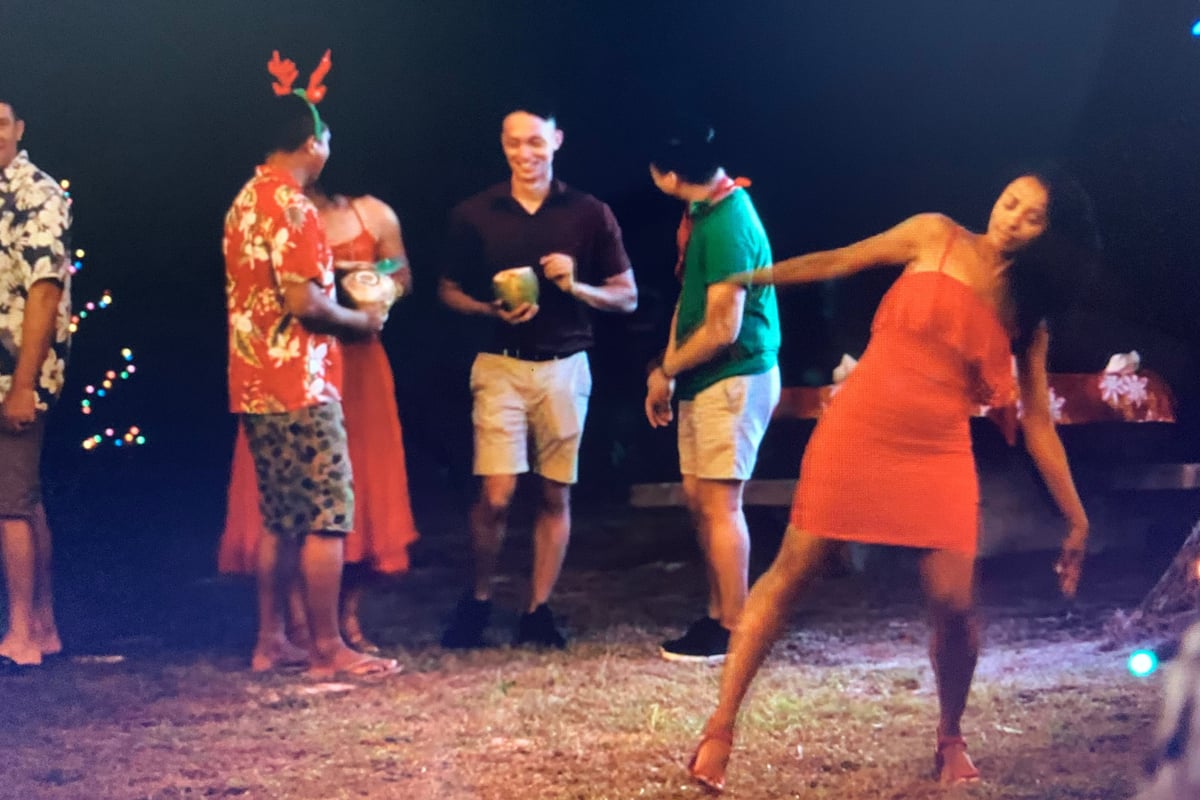 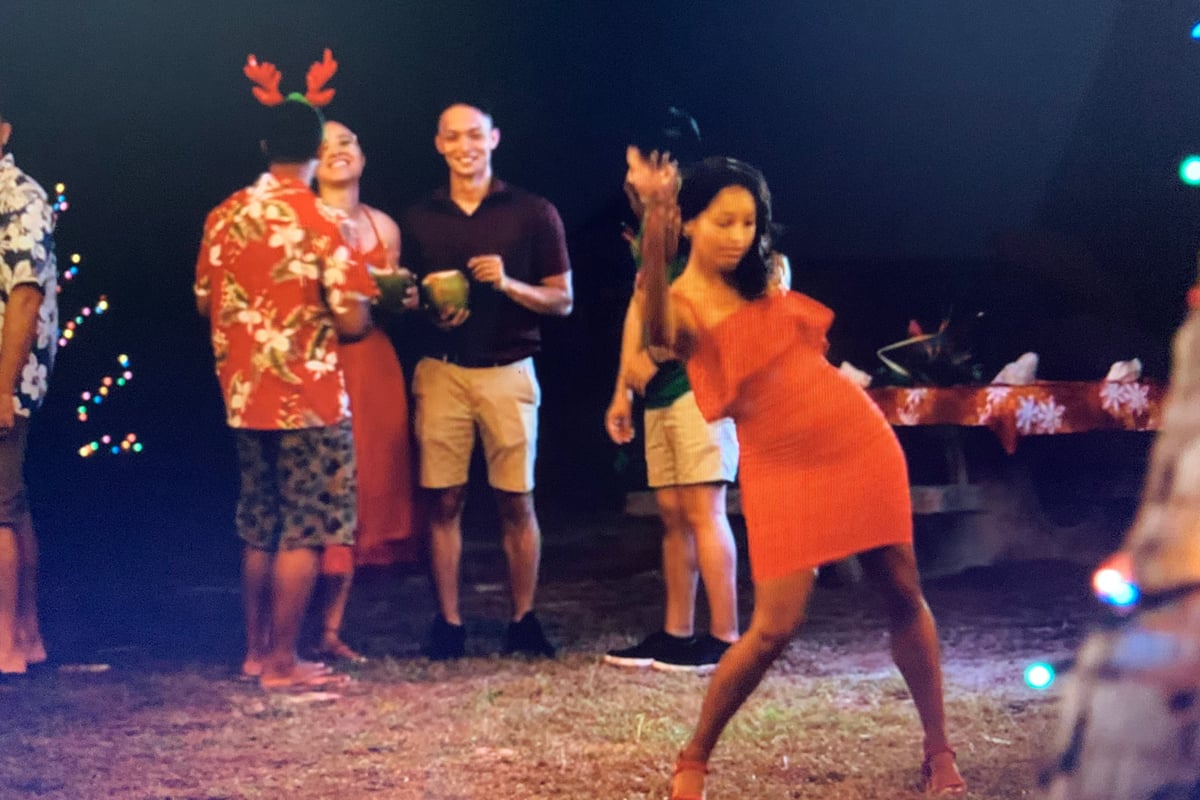 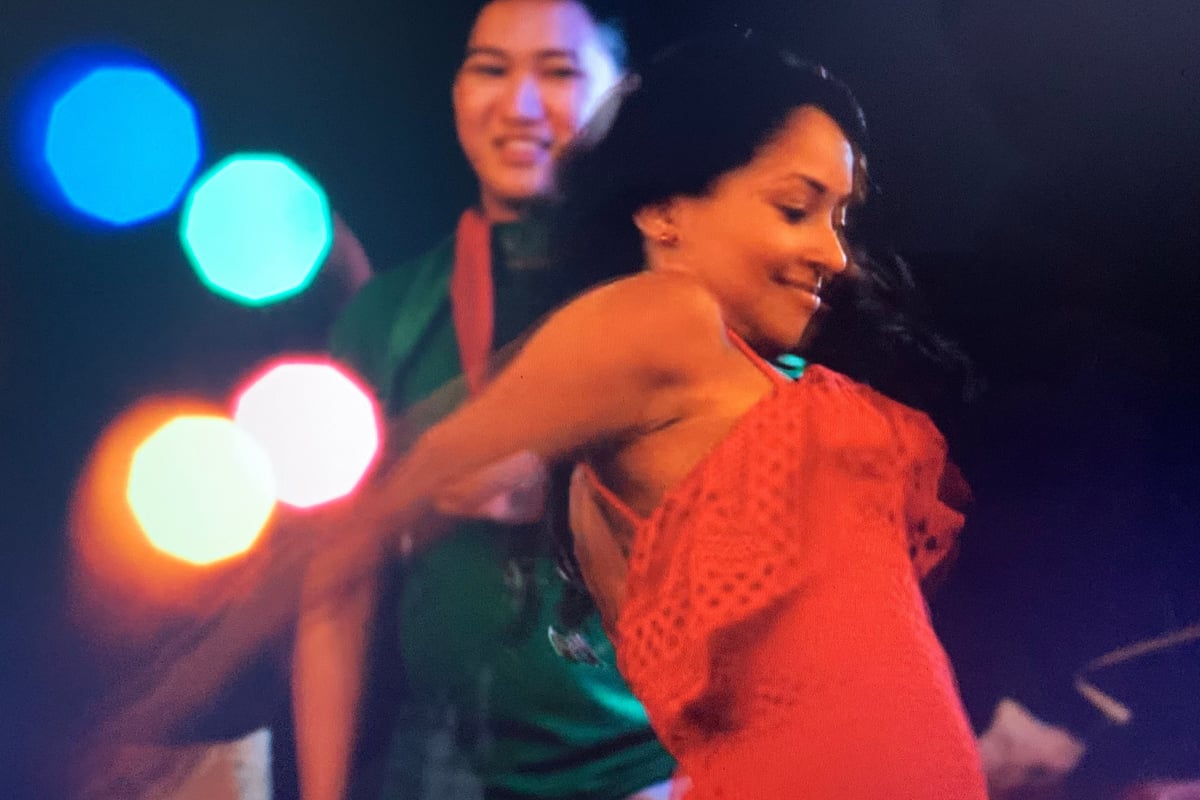 After embarrassing herself and... everyone she has ever known, Erica and Andrew ~slow dance~.

They have a deep conversation about hopes and dreams and... helping.

"You know, I misjudged you," Erica says.

"I could say the same about you," Andrew replies.

NEVER BEEN DONE BEFORE.

They're about to kiss when Andrew's friend interrupts to say "the fire dancers are ready". I'm not joking.

The next day Erica approaches the town's mayor, who is rich, but also too stingy to fork out cash for a generator so children can... learn. Sweet guy.

She does some ~business~ and gets him to donate three solar power inverters.

THIS MOVIE SHOULD 1000 PER CENT BE OVER BY NOW BUT NO, THERE IS A TYPHOON COMING.

For reasons that remain very, very unclear, they break out in song until...

THE CONGRESSWOMAN IS HERE AND SHE'S MAD.

She complains Operation Christmas Drop doesn't benefit Americans, Andrew is like, "this base is America's forward-operating base in a region of hostile actors" and oh... sh*t.

It's just dawned on me that this is American military propaganda with tinsel and a hot Canadian actor in the lead to throw us off the scent.

Am I mad about that? Yeah. Will I power through the remaining 25 minutes? You betcha.

The mean congresswoman orders Erica home and she goes to pack. Then she has another conversation with the CGI gecko.

I simply cannot deal with this movie anymore.

After a pep talk from a real life human being, Erica runs to find Andrew and what do you know, the typhoon ain't as bad as they first thought.

Suddenly it's... sunny and Operation Christmas Drop is a go. Guess you can't even trust the weather wo/men in Guam.

Erica says the congresswoman wasn't always a cold-hearted b*** (I'm paraphrasing) so they all jet off to throw boxes out of a plane called Santa 01 because... yep. 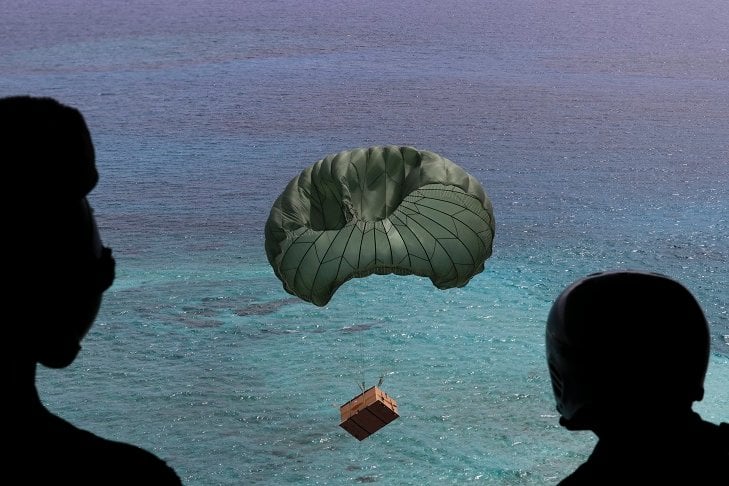 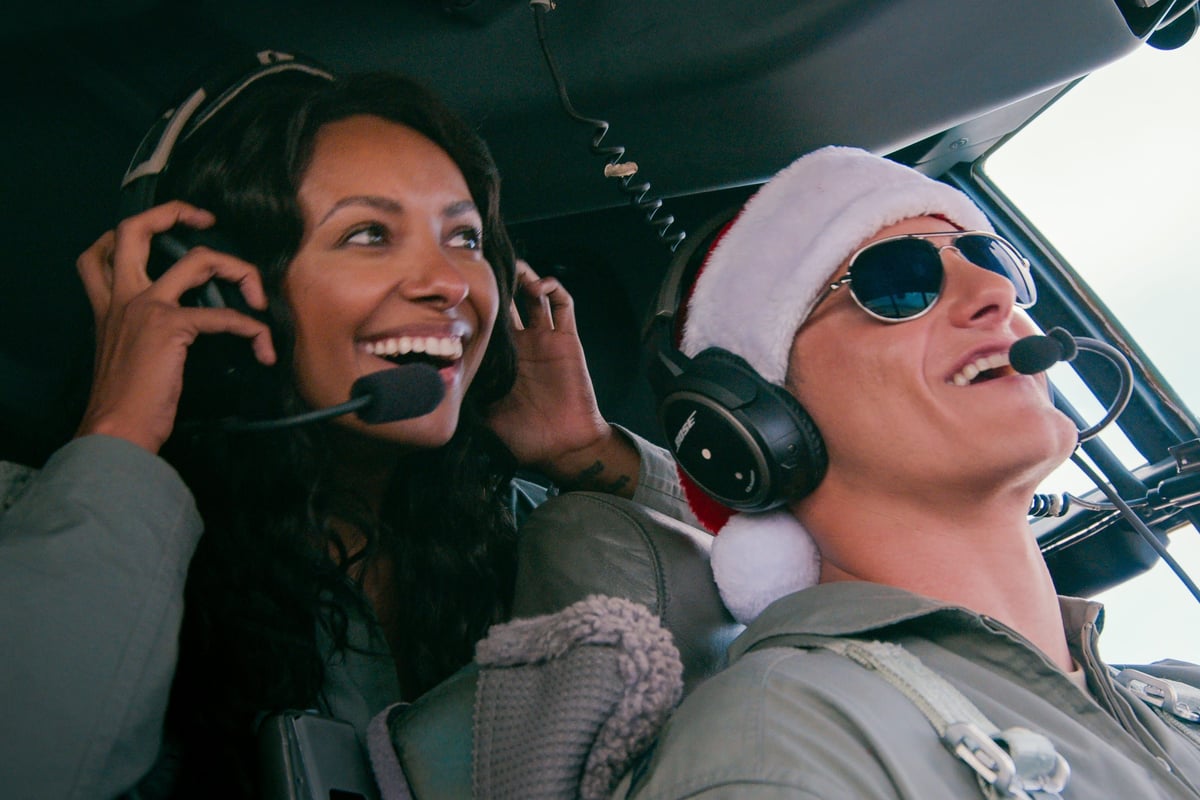 After what feels like 12 hours of in-air shots, they land and the congresswoman has come around. The very important military base which the US government would never actually consider shutting down, will not be shut down.

Ooh. It's Christmas Eve and Erica has somehow figured out how to fly Andrew's family in and... NO. NO. THIS DOES NOT HAPPEN.

But whatever, I'll roll with it.

They kiss. It's nice and wholesome and the music is far too aggressive for this moment.

We fade out, and learn Operation Christmas Drop is a real thing. That's nice.

I JUST WATCHED THAT ENTIRE THING AND WE DON'T EVEN KNOW IF ERICA EVER SEES HER FATHER AGAIN, IF ANDREW EVER ACCEPTS HE IS NOT SANTA AND IF THE CGI GECKO EVER LEARNS HOW TO GET OUTSIDE.

FFS, Netflix. I will never forgive you. Until the next... terrible Christmas movie comes out.

Reply
Upvote
Netflix is so weird. There are some really great shows (like Stranger Things or The Witcher), and then endless piles of shite like this. There are dozens of terrible looking Christmas rom-coms, not to mention the everyday ones too! I suppose it's like the old days, going to Video Ezy and having to sort through a hundred straight-to-DVD movies from Chuck Norris or Steven Seagal before you could find the last precious copy of something actually good.
News
General
Opinion
True Crime
Politics
Sport
Explainer
Entertainment
Celebrity
Reality TV
Movies
TV
Books
Rogue
Royal
Lifestyle
Beauty
Fashion
Weddings
Home
Wellness
Health
Fitness
Travel
Food
Parents
Before The Bump
Pregnancy
Baby
Kids
Teens
School
Parent Opinion
Work & Money
Money
Finance
Career
Lady Startup
Relationships
Sex
Dating
Separation
Friendship
Family
Real Life
Couples