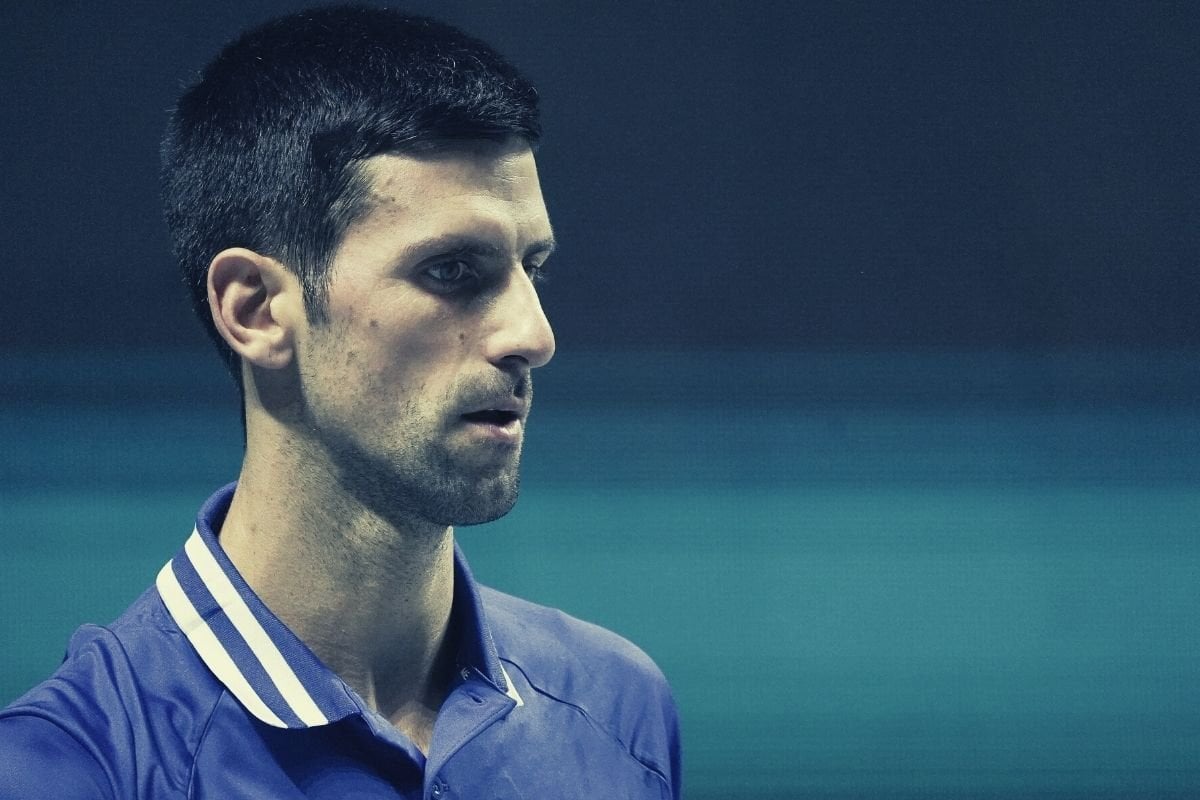 Hours after arriving on Australian soil, tennis World No.1 Novak Djokovic is potentially heading home before he even steps foot outside Melbourne airport's international terminal.

After months of uncertainty as to whether the 34-year-old would be allowed into the country for the 2022 Australian Open due to his undisclosed vaccination-status, the Serbian champion announced on Tuesday night he was on his way Down Under after receiving an exemption.

"I've spent fantastic quality time with my loved ones over the break and today I'm heading Down Under with an exemption permission. Let's go 2022," he wrote.

However, the announcement has been controversial to say the least, with the decision labelled "f***ing disgraceful", "a rort" and a "farcical".

He arrived in Melbourne just before midnight on Wednesday, but this morning it's being reported Djokovic's visa has been cancelled by the federal government after he spent the evening being questioned by Border Force officials in a room at the terminal.

The Age reports his lawyer is challenging the decision, and it's unclear if the tennis star will remain in the country as they attempt to overturn the decision.

If he does, it's likely he'll be placed in government accommodation or Victorian hotel quarantine while he waits.

Djokovic’s father Srdjan Djokovic told Serbian media outlet B92 Djokovic was in a room "where no one can enter," while his coach Goran Ivanisevic posted from the airport at 5am with the caption, "not the most usual trip down under."

So, let's rewind. How did we get here?

Tennis Australia confirmed last year that all tennis players taking part in the 2022 Australian Open would need to be fully vaccinated to participate in the tournament.

Djokovic has continually refused to make his vaccination status public. But in April 2020, the tennis star did reveal that he was opposed to mandatory jabs.

"Personally I am not pro-vaccines. I would not like it for someone to compel me to be vaccinated so I can travel."

Happy New Year! Wishing you all health, love & joy in every moment & may you feel love & respect towards all beings on this wonderful planet.

I’ve spent fantastic quality time with loved ones over break & today I’m heading Down Under with an exemption permission. Let’s go 2022! pic.twitter.com/e688iSO2d4

Speaking on Serbian television in late November 2021, Srdjan said: "I really don't know if that [coming to Australia] will happen. Probably not under these conditions, with this blackmail and when it's done that way." Srdjan also defended his 34-year-old son's "exclusive and personal right" to be vaccinated or not, suggesting even he did not know if Djokovic had received the jab. 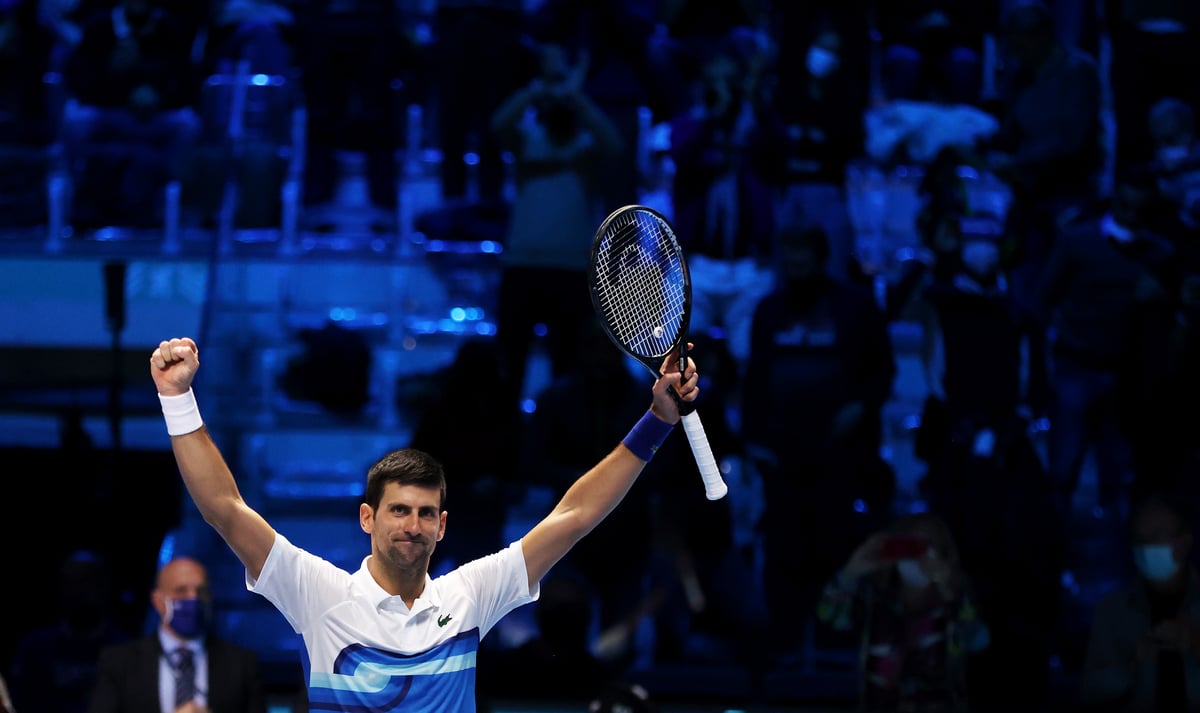 As well as Tennis Australia's mandate, the Victorian Government announced that only fully vaccinated players, fans and staff would be allowed into Melbourne Park, which is home to the Australian Open Grand Slam.

"Everyone's looking forward to the Australian Open and everyone who will attend - spectators, players, officials, staff - is expected to be fully vaccinated. They're the rules," Victorian Deputy Premier James Merlino said during a press conference.

"Medical exemptions are just that: it's not a loophole for privileged tennis players. It is a medical exemption in exceptional circumstances if you have an acute medical condition."

Victorian Premier Daniel Andrews said in early October 2021: "Those (grand slam) titles won't protect you either. The notion of you getting in here without being vaccinated I think is very, very low." 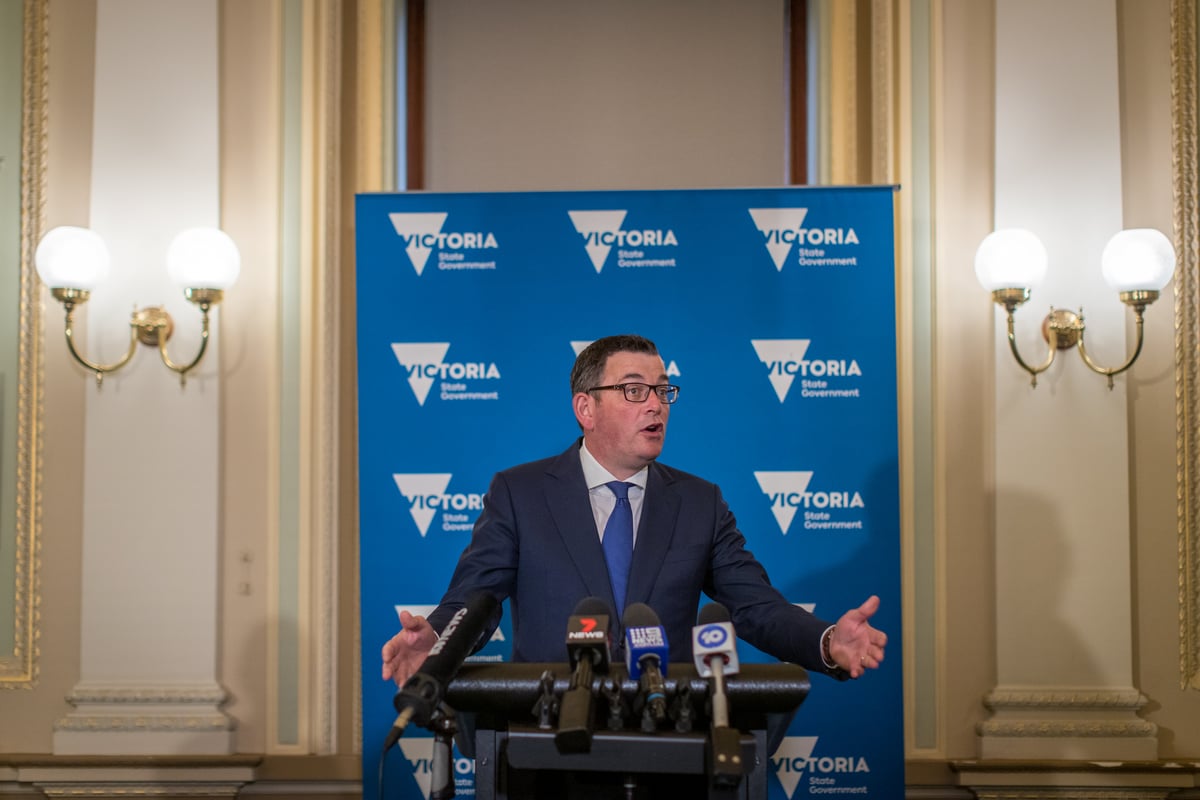 Ok... then how and why did Djokovic receive an exemption?

As to how Tennis Australia came to the decision to grant an exemption, here's what they've had to say.

The review was overseen by two independent panels: the Australian Technical Advisory Group on Immunisation (ATAGI) and the Independent Medical Exemption Review Panel appointed by the Victorian Department of Health.

"The applications were reviewed and approved only in line with ATAGI guidelines," Tennis Australia's statement read.

Australian Open Tournament Director Craig Tiley said everyone going to the Australian Open, i.e. players, fans and staff, must be fully vaccinated to attend or have a legitimate reason to obtain an exemption.

Tiley noted on Wednesday morning that 26 players and their primary support staff in total applied for exemptions. Only a "handful" of them were successful. 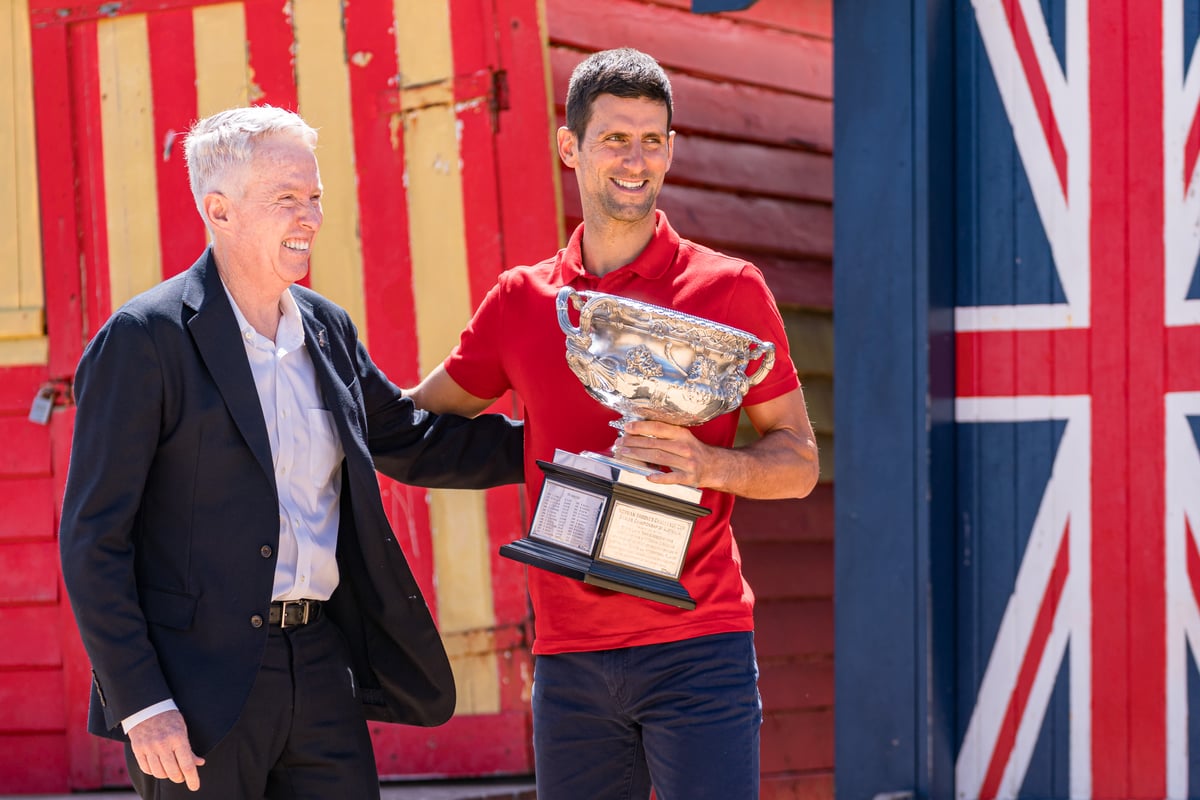 So what can be considered a 'legitimate reason' for exemption?

Due to privacy laws, players who chose to request an exemption are not obliged to reveal so publicly. It is likely the fact that Djokovic's potential 'anti-vax' status is so highly publicised, he felt the need to share he had received an exemption to play. The tennis player has not detailed the specifics of his exemption, however.

The ATAGI guidelines state exemptions can be given for the following reasons: 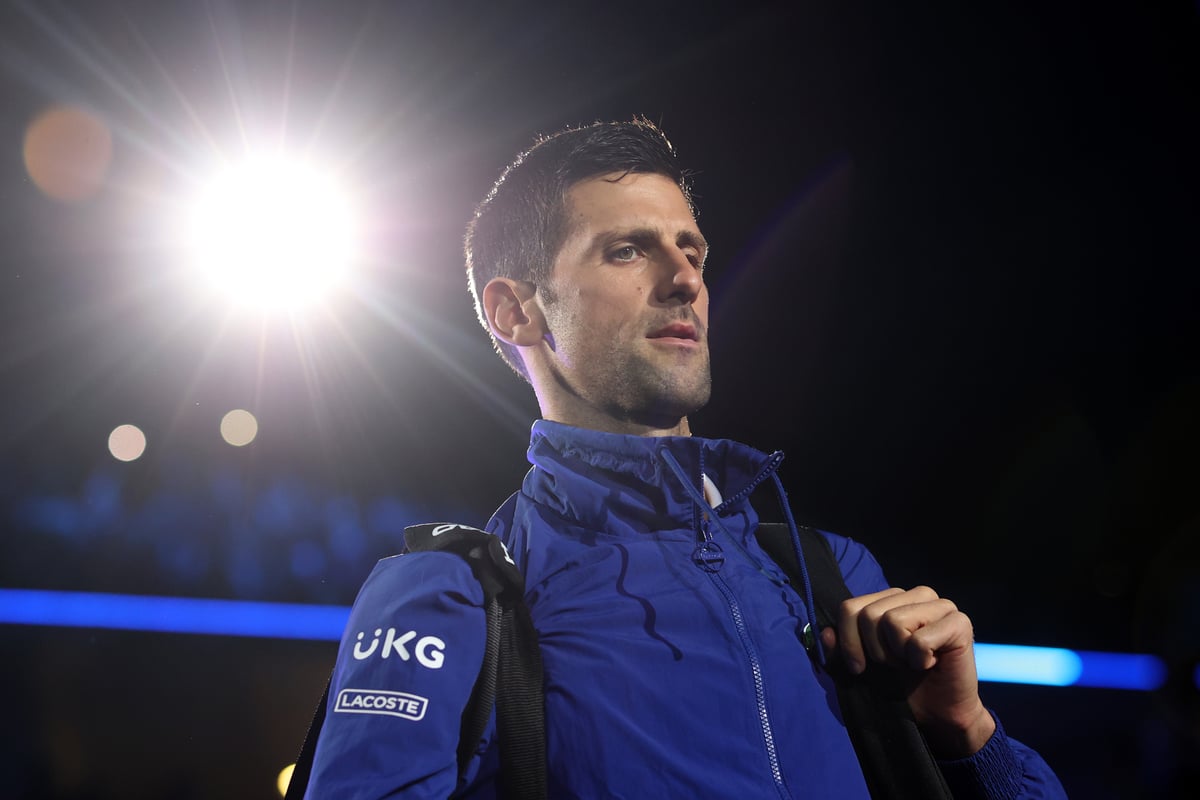 Ultimately, regardless of the reason for exemption, the decision has been met with widespread criticism.

"I don't care how good a tennis player he is. If he's refusing to get vaccinated, he shouldn't be allowed in," he wrote on Twitter. "If this exemption is true, it sends an appalling message to millions seeking to reduce #COVID19Aus risk to themselves & others. #Vaccination shows respect, Novak."

Australians haven't been shy in their reactions to Djokovic's exemption...

Whether it's members of the general public, sports commentators, journalists, reporters or television presenters, the overall response can be summed up perfectly via journo Samantha Lewis' tweet: "This is an obscene decision and organisers should be f***ing ashamed of themselves."

Listen to Mamamia Out Loud: In this episode, the ladies discuss the men’s world number one tennis player, Novak Djokovic. Here’s why Djokovic is making Mia "pufferfish". Post continues after audio.

Ex-AFL player Corey McKernan said: "People with loved ones who are dying / some needing urgent treatment cannot get into their own states. You tell people they can't go to Coles or a cafe without being vaxxed but if you're world number one you get a pass? F***ing disgrace."

On Sunrise, reporter Nick McCallum noted: "Who knew that Novak Djokovic has 20 grand slam titles, nine Australian Opens, has been on the circuit since 2003, and no one knew he had a serious medical issue... of course there's a large level of cynicism here."

People will be going to bed right now to get up at 5am to do the right thing to get into testing queues for PCR results they won’t get for six days and will quarantine anyway. How bloody galling to see Novak get an exemption. Farcical https://t.co/UYDrp9NPFc

everybody attending the Australian Open has a patriotic duty to boo Djokovic for the entirety of his stay. this is an obscene decision and organisers should be fucking ashamed of themselves.

Jamie Murray on Novak Djokovic's medical exemption: "I think if it was me that wasn't vaccinated I wouldn't be getting an exemption" #AustralianOpen

There are also non-medical exemptions which can be applied for to enter Australia; Djokovic did not say his exemption was medical.

However it’s difficult to imagine a tennis player, even a good one, could be deemed “in the national interest” or possessing “critical skills.” pic.twitter.com/YO8kSwYgAr

Australians have been denied for two years, but this bloke - who’s taken extraordinary liberties in the face of the coronavirus - gets his exemption. Novak Djokovic is an all-time great, but he ain’t essential.

On Novak Djokovic's medical exemption, Alex de Minaur is all of us. pic.twitter.com/EmeYLRJXoE

Novak Djokovic is the greatest tennis player ever. Forget Laver, Agassi ,Federer,Sampras,Nadal,McEnroe,Connors and Borg for Novak has won 20 Grand Slams and 87 titles and a billion dollars without us knowing he had a debilitating medical problem.We have been taken for fools. Kb

Australia is waking up angry about the Djokovic exemption news. pic.twitter.com/ArhBmXM9VS

So why the backflip? Has the government changed their mind?

There are reports Djokovic didn't have adequate documentation to prove the reason for his exemption when he was met on the tarmac by Australian Border Force officials.

According to The Age, the Victorian government rejected a late-night request to sponsor Djokovic's visa as he was in the air on the way to Melbourne.

Acting Victorian Sports Minister Jaala Pulford confirmed as such in a late-night tweet that read, "The Federal Government has asked if we will support Novak Djokovic’s visa application to enter Australia.

"We will not be providing Novak Djokovic with individual visa application support to participate in the 2022 Australian Open Grand Slam."

This story is still unfolding, and we're yet to hear from Djokovic himself.

The Australian Open is due to start on Monday January 17.

This post was originally published on January 5, and updated with new information on January 6.

Reply
Upvote
Kind of off topic here, but can anyone tell me how Novak's dad's name - Srdjan - is pronounced?
M
mb1111 4 months ago

Reply
Upvote
Reading the list of medical exemptions which includes having had the virus in the past six months I suspect that is what has allowed the exemption.  He does himself no favour by keeping quiet as to the reason but somehow I doubt it is because he is rich and famous, because quite a few other players had also applied for exemptions and only a small handful were granted. Meaning that there had to be a good reason for it.
News
General
Opinion
True Crime
Politics
Sport
Explainer
Entertainment
Celebrity
Reality TV
Movies
TV
Books
Rogue
Royal
Lifestyle
Beauty
Fashion
Weddings
Home
Wellness
Health
Fitness
Travel
Food
Parents
Before The Bump
Pregnancy
Baby
Kids
Teens
School
Parent Opinion
Work & Money
Money
Finance
Career
Lady Startup
Relationships
Sex
Dating
Separation
Friendship
Family
Real Life
Couples