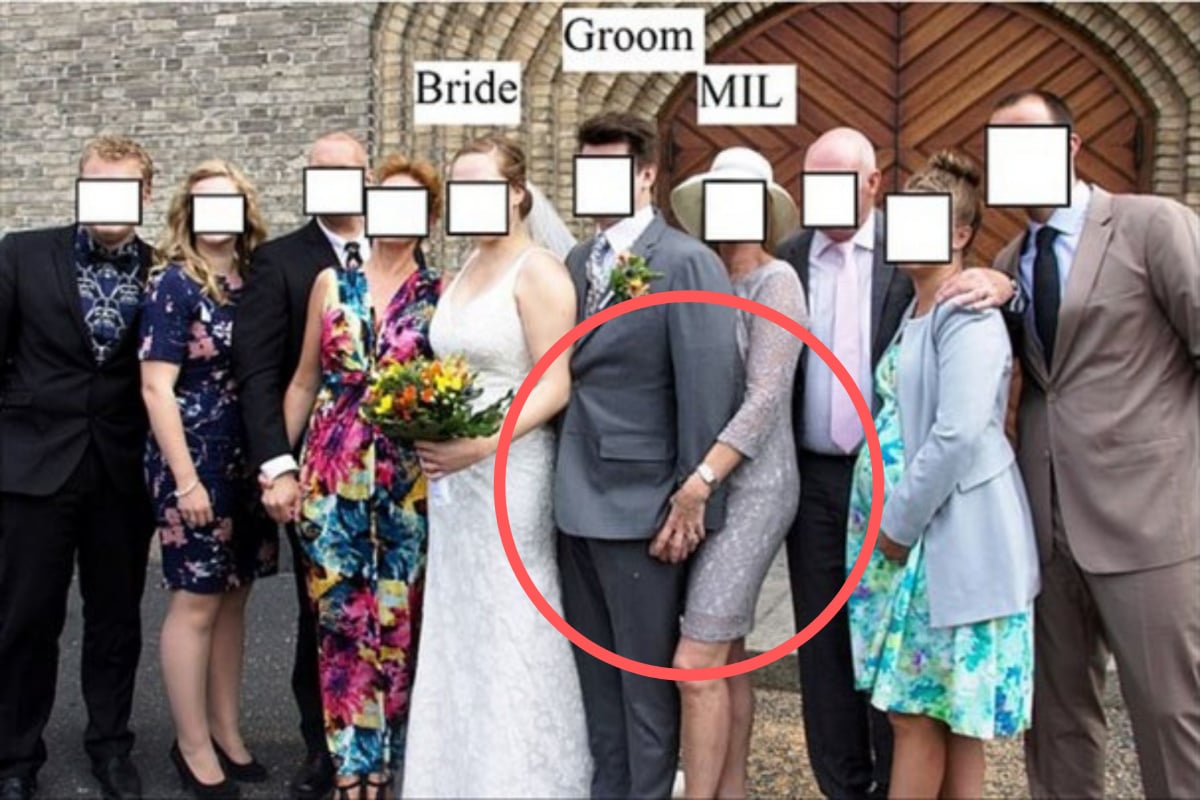 Two of them went viral for their ‘stage-five clinger’ antics at their sons’ weddings – thanks to angry posts from their now daughters-in-law.

On Reddit, a bride posted a wedding photo, which at first seems standard… until you take a closer look and see the groom’s mother posing with her hand firmly grasping his.

Mamamia Confessions: the worst thing I ever said to my mother-in-law. Post continues after video.

The bride explained that in the context of her mother-in-law’s pre-nuptials behaviour, she found the photo the icing on the, ahem, wedding cake.

“She went with him when he got his suit fitted,” the bride complained. “Afterwards, she sent me a long fb [Facebook] message detailing how handsome he looked and how she was ‘falling in love all over again’.

The bride added that the mother-in-law positioned herself in between the new husband and wife for some of the photos.

"Her daughter asked her to move, so my husband and I could stand together, and her actual response, I swear to you all, was a sharp, 'I can stand here! I'm his woman, too!'"

Most people empathised with the bride, with one comment in particular - “she may as well have peed on him” – summing up the essence of the sentiments.

The tale came after another story earlier in the week exposed a different MIL for behaving ‘badly’.

Again on Reddit, a newly-minted daughter-in-law furiously posted a wedding photo of her husband’s mum seemingly ‘spooning’ him from behind, with one leg slightly over his, and her hand covering his.

Reactions to the photo included:

“Well, at least she isn't wearing a white wedding dress.”

“Apparently, [her son] was a pole in a strip club in a previous life.”

“I just barfed a little in my mouth.”

I actually agree with one commenter, who suggested we were all focusing on the wrong thing:

“Since everyone is focused on the MIL, I just want to point out that the guy on the far left is wearing an awesome Darth Vader print dress shirt.”

But that's where I stop agreeing. Because as the mother of an "only" son, I say let’s give these poor women a break.

I look at these mums and think: I would totally do the same. They are simply adoring and doting. Isn't that a good thing?

A child’s wedding day is usually a very proud moment for a parent, so to me, these mums are saying with their gestures:

It doesn’t get more beautiful than that, right? *wipes tears from eyes*

Sure, there’s a little bit, “I can’t and won’t let you go, you always belonged to me, first.”

And also a perhaps a complete disregard for boundaries and appropriate social behaviour.

I look at my 12-year-old and think he’s my greatest achievement and the best thing that’s ever happened to me. That’s a standard parental feeling. Me and my son. I'm sure I'll always be embarrassing...

We’ve always been very affectionate with each other, so I can totally imagine at his wedding, showering him with kisses and rubbing his back, and giving a wonderfully passionate speech that makes everyone cringe on the inside… whilst my son wishes he’d listened to his future wife and not invited me.

Seriously, though, I’d like to think that by the time he’s old enough to get married and/or is an adult, I would be a tad more respectful of his personal space…

But in all likelihood, I won’t be.

If I’m really honest, I actually envisage my future elderly self living in a large gothic house while my son runs a creepy motel next door… and then he could keep my bones in the basement after I’m gone.

That would be my ideal arrangement.

So, don’t be surprised if one day you see me in an ‘awkward MIL moment’ photo somewhere, being yelled at on the Internet.

But don’t worry, I won’t pee on him. Even I have my limits.

What do you think of the "creepy" mother-in-law schtick?  Have you experienced it in real life?

If you love your son you will do everything you can to make sure his wife is his first priority.
If you smother him and try and maintain inappropriate bonds he will end up distancing himself from you.
This is my husband’s experience with his mum. Clinginess is the opppsite of endearing.

Sounds oedipal to me

It's kinda the other way though!

Thats what I meant,there must be a name for that