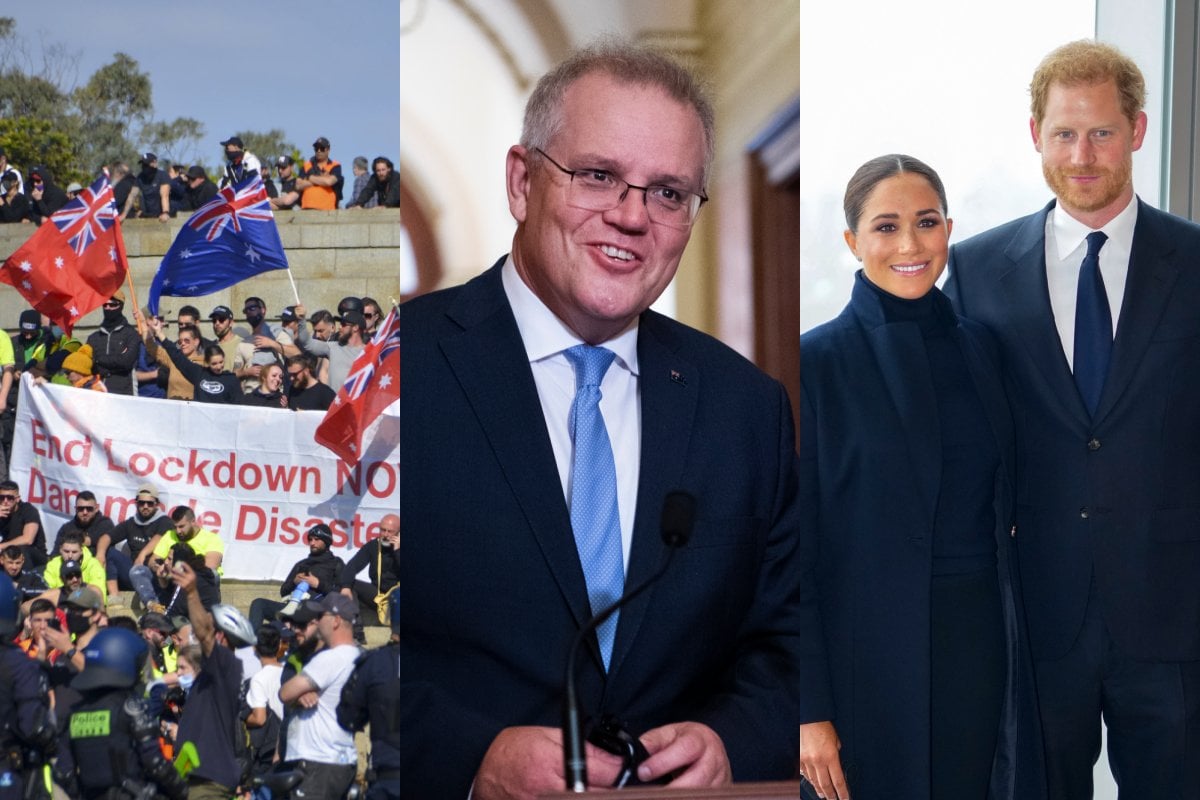 Demonstrators who attended the third day of recurring Melbourne protests have been encouraged to get tested as a protester battles COVID-19 in hospital.

Victoria's health department has confirmed a person is being treated in hospital after attending Wednesday's at-times violent rally.

"Public health investigations are underway," a spokesman said in a statement on Thursday afternoon.

"We are urging protesters to get tested should they experience COVID-like symptoms, no matter how mild."

#BREAKING: A person who attended yesterday's protests in Melbourne's CBD is being treated in one of the city's hospitals for Covid-19https://t.co/RzDjEylGiZ

The infection will be included in Friday's official case tally.

The COVID-positive protester was among a mob of 400 to 600 who swarmed the Victorian capital on Wednesday, despite stay-at-home orders and repeated warnings from authorities. There are fears this could now spark a super-spreader event.

The demonstrations initially began in opposition to mandatory COVID-19 vaccinations for the construction sector and the closure of building site tea rooms, but have since turned into wider unrest.

A fourth day of the planned protests was a non-event, with demonstrators largely a no-show on Thursday despite flagging potential meeting sites.

Police pounced on protesters before they were able to gather in significant numbers, making 92 arrests.

From September 30, double-dosed Victorians stuck anywhere in NSW can come home if they return a negative test 72 hours before departure, isolate at home for 14 days and get tested at the start and end of quarantine.

Hospital peak could be worse than predicted for NSW, as Sydney hospital battles another outbreak.

Two dozen people at Liverpool Hospital in Sydney's southwest have contracted COVID-19 in a week, in the second major outbreak at the facility outbreak in recent months.

All staff members who have tested positive are fully vaccinated.

COVID cases in Sydney's west and southwest have halved in 2 weeks, but there are growing concerns over a new outbreak at Liverpool Hospital. https://t.co/OF81oZFF1j #7NEWS pic.twitter.com/FXUM1Kv3Dz

There are currently 1232 COVID-19 patients in hospital in NSW, with 242 in intensive care and 122 on ventilators.

Government modelling suggests daily COVID-19 infections may have already hit a high in NSW, but hospitalisations are still expected to peak in October when the system will be put under unprecedented stress.

However, the Doherty Institute has warned its modelling when determining reopening targets of 70 and 80 per cent vaccination coverage did not reflect the true severity of Delta strain infections.

The institute's Director of Epidemiology, Jodie McVernon, told a NSW parliamentary hearing on Thursday new international research shows the health outcomes from the Delta strain are worse than the original Alpha strain.

If the severity from Delta is about twice what was originally assumed, the numbers of hospitalisations of unvaccinated people will probably be double what has been predicted, Professor McVernon agreed.

The Institute's modelling presented to national cabinet in July would not be significantly impacted, as the overall strategy focused on minimising case numbers.

But there could be implications for the NSW government's modelling predicting the stress on the health system as hospitalisations peak next month.

That modelling — conducted by the Burnet Institute — predicted cases would peak at a seven-day average of about 1500 in September, and more than 550 COVID-positive patients will require an intensive care bed by early November.

It showed hospitalisations across the state — with COVID-19 or otherwise — would likely peak in late October, with about 3400 people admitted in one week.

Premier Gladys Berejiklian at the time said the state's intensive care surge capacity of 1550 beds will likely hold up.

NSW reported 1063 new locally acquired cases of COVID-19 and six deaths in the 24 hours to 8pm on Wednesday.

Australia has firmed up its commitment to restart international travel once 80 per cent of people aged 16 and above receive two coronavirus jabs.

Despite some state premiers maintaining a hard line on internal borders, the federal government is increasingly adamant overseas travel restrictions will ease when the target is hit.

Projections suggest national 80 per cent double-dose coverage could be achieved before the end of the year.

Australia is expecting to welcome back international students and skilled migrants when the 80 per cent double dose milestone is met, which will also allow for overseas travel for the fully vaccinated. https://t.co/zV3mImOYXa

Prime Minister Scott Morrison confirmed he would forge ahead with relaxing tough border measures in line with the national reopening plan.

"That's certainly what we intend to facilitate — for vaccinated people to travel," he told reporters in Washington DC on Thursday.

Mr Morrison said he was looking forward to welcoming back students and skilled migrants when borders eased.

"Those vaccination numbers will continue to rise," he said.

"As they rise, the opportunities to get back to life as normal as it can be, and living with the virus, will just be coming closer each and every day."

The plan would start with allowing people to leave the country more freely before establishing more travel bubbles like the paused New Zealand arrangement.

Qantas and Virgin are preparing for more overseas flights to restart in December with vaccination expected to be a condition for travellers.

More than 45,000 Australians are stranded overseas with the figure rising in recent months due to reduced passenger arrival caps.

Labor continues to blame the government's failure to establish multiple quarantine hubs for the backlog.

"The Australian government should be moving heaven and earth to do everything it can to get those Australians back home," he told reporters in Adelaide.

A first in-person meeting of the leaders of the Quad group of countries — the United States, Japan, Australia and India — will yield progress in several areas including infrastructure, health and cyber, a senior US administration official says.

The Quad leaders — US President Joe Biden, Indian Prime Minister Narendra Modi, Japanese Prime Minister Yoshihide Suga and Australian Prime Minister Scott Morrison — will also discuss regional security, the official said on Thursday, although he stressed that security was not the focus of the informal grouping that has come together in response to China's growing power.

While declining to provide specifics, the official, who did not want to be identified, said the summit at the White House "will have much to say" about next steps on vaccines for the Pacific region.

"We have what we call deliverables in infrastructure, on broader health engagements on science and technology on the space, on cyber," he said.

He called a commitment made at a virtual meeting of the Quad leaders in March to supply a billion COVID-19 shots across Asia by the end of 2022 "important".

The US official called Friday's meeting "historic" and an opportunity for the four leaders to talk openly about "modern challenges, their hopes and aspirations".

"We'll talk about a variety of things, including regional security, but we'll also talk about our goals on education, on infrastructure," he said.

"The linking and thickening of ties between our four countries is taking place before our eyes," he said.

His son Tom Elliott, confirmed the death late on Thursday.

"It is with great sadness that we announce the death of John Dorman Elliott," he said in a statement published by News Corp.

On the eve of footy's biggest day, the #AFL has lost one of its legends with the passing of former Carlton boss, John Elliott. #9Today pic.twitter.com/lFr2DWugud

"He died Thursday evening at the Epworth Hospital in Richmond after a short illness."

"Dad will be greatly missed by his four children Tom, Caroline, Edward and Alexandra. Their partners Elise, Craig and Georgia, plus grandchildren Henry, Sebastian, India, Ava, Lottie and Mathilda will remember forever their 'Grandpa Jack'.

UK police say they have arrested a suspect in the hunt for the murderer of a teacher who was killed in a London park as she made a five-minute walk from her home to meet a friend at a pub.

Sabina Nessa, 28, left her home in south London just before 8.30pm on September 17, making her way through Cator Park towards The Depot Bar on Pegler Square in Kidbrooke Village.

Read more: Her name was Sabina Nessa. Like Sarah Everard, she was just walking home.

She never arrived and her body was found in the park the next afternoon.

"Sabina's journey should have taken just over five minutes but she never made it to her destination," Detective Inspector Joe Garrity said.

Police later said they had arrested a 38-year-old man in Lewisham, south London, on suspicion of murder.

They also released pictures taken from security TV footage of a man and a vehicle, appealing to anyone who recognised either to make immediate contact.

"Any information as to his identity or whereabouts could be vital for our investigation," said Detective Chief Inspector Neil John.

A post mortem carried out on Monday was inconclusive, police said.

Prince Harry and Meghan, the Duke and Duchess of Sussex, have had a hawk's-eye view of New York City with a visit to the rebuilt World Trade Center's signature tower, their first public outing since the birth of their second child, Lilibet.

Prince Harry and Meghan Markle have stepped out in New York City for their first joint public appearance since the birth of daughter Lilibet.

The royals did not make remarks.

In answer to a question about how she was enjoying her trip to New York, Meghan could be heard saying, "It's wonderful."

Harry and Meghan then visited the neighbouring September 11 memorial plaza.

The couple looked out over a reflecting pool where one of the towers stood and then visited the September 11 museum.

The duke and duchess are in New York for a Global Citizen Live event to call for vaccine equity.

- Oil giant BP says it is having to temporarily close some petrol filling stations in the United Kingdom because of a lack of truck drivers, hours after a junior minister cautioned the public not to panic-buy amid fears of food shortages.

- China has sent 24 fighter jets toward Taiwan in a large display of force after the self-governing island announced its intention to join an 11-member Pacific trade group that China has also applied to join.

- Portugal is scrapping many of its remaining COVID-19 restrictions, Nepal is allowing in tourists who have been fully vaccinated and Singapore's daily infections have hit a new high.

Reply
Upvote
1 upvotes
Megan and Harry no longer represent the BRF or the Commonwealth, so not sure why their celebrity appearance in NY is considered by this site to be "international news".
C
cat 8 months ago