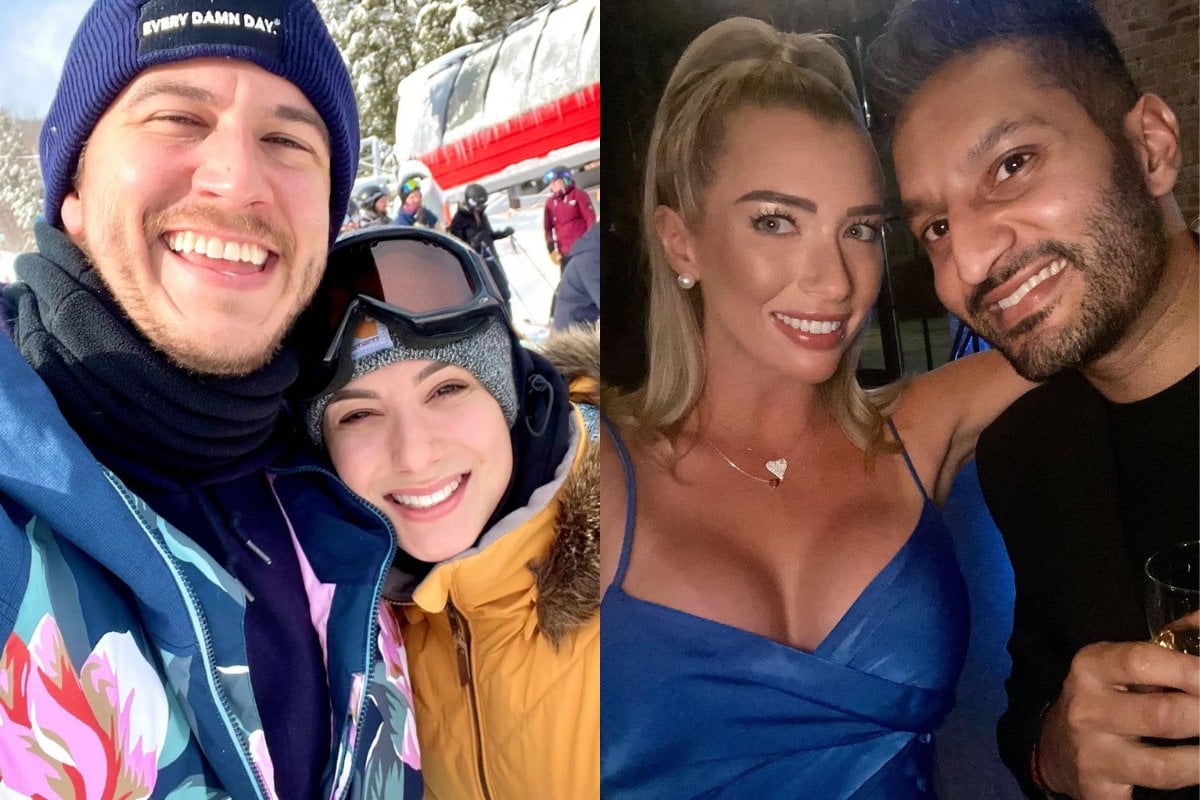 While it's quite possibly the strangest way to find love, Netflix's Love is Blind has delivered yet another entertaining season.

Finishing up with the reunion special in March, the second season introduced us to a brand new group of singles hoping to find love and get engaged to someone... without having ever met them. It's wild to even type out.

Need a refresher? Here's the trailer for Love is Blind season two. Post continues below.

Since the show was actually filmed in early 2021, we're desperate to know which cast members from season two are still together and who's moved on. And what about the couples from season one?

We did some digging into the cast of both seasons, and here's everything we know about them in 2022.

Yes, season two couple Danielle and Nick are still together! If you watched the reunion episode, you'll know they've actually moved in together.

"We have dance parties and he gets on the table before I do," Danielle said during the episode.

They have also upgraded her engagement ring.

"Over Christmas, [Nick's] uncle surprised me with his great grandma's wedding ring," she said. "It felt like I was proposed to all over again."

Since the show, the couple have "travelled together as much as possible"; posting photos of their holidays on Instagram.

While Sal and Mal amicably split on the show, Sal has since started dating again.

"I have been using everything I’ve learned from this experience and I’m focusing on my self-love, too," he told Us Weekly in March. "But I am talking to somebody."

As for Mal, she hasn't shared anything about a new relationship... yet.

The most shocking wedding breakup was, without a doubt, Shayne and Natalie. The couple seemed so secure and happy until the night before when everything blew up during an argument.

Natalie has since shared that they gave it another shot not long after their big day.

"A week after our wedding, we started dating again," Natalie told People.

"Maybe it's not dating - we continued our engagement again. We were together for several months."

However, it didn't last.

"I think at the end of it, we realised that we're very different people with different needs and wants that we can't fulfill for one another," she said.

"We did take a break in communication after that, just to get into a better place."

"This journey with you will be something I’ll never forget. It was easily the best time of my life and I would do it all over again knowing I get to spend more time with you," he wrote.

"I don’t know what’s next for us but I do know that I will never stop loving you."

Since Shaina and Kyle split on the show after realising they had quite different views on things, it'll come as no surprise that they have not gotten back together.

During the reunion episode, Kyle announced he should've married another contestant.

"I have a huge regret," he said. "The biggest regret is I should've asked Deepti to marry me."

"I f**ked up. I should've tried harder for [her]. I love her so much, she's the best. And I wish I saw what was right in front of me. That's my biggest regret."

While Kyle admitted his feelings for Deepti at the reunion, neither of them confirmed they're dating post-show.

"We’re playing with them a little bit, but it’s funny. Kyle and I have such a beautiful friendship. We’re just figuring it out."

Shaina, on the other hand, recently got engaged to her boyfriend, Christos Lardakis, in Greece.

"Shaina is engaged. She's been dating Christos for almost a year and this is the happiest I've ever seen her," a source told People.

"He has stood by her side through all of the Love Is Blind drama and has been her steady in the storm."

While neither of them have confirmed their engagement on social media, Shaina did share some photos of their European holiday:

Since you know that Deepti and Kyle might become an item, it's safe to say that she and Shake didn't rekindle their romance.

Now, Shake has announced he's actually got a new girlfriend.

After going Instagram official on Friday, the veterinarian wrote, "Good things come to those who w̶a̶i̶t̶ don’t settle."

And last but not least, the other couple from season two who said yes on their big day: Iyanna and Jarette.

At the reunion, the couple confirmed that they are still together.

"It's been hard, but it's been really rewarding too," Jarette said, while Iyanna shared how they've had to adjust to married life.

"One thing I will say is we've been finding our balance," she shared.

"We're hyper aware that we are very different - he's extremely extroverted and I'm like, 'Please stay away from me'. So, we've been finding this will always be something that we have to deal with.

"But we have such similar values and goals that it's been a compromise."

And if you peep her Instagram, you'll see Iyanna has taken Jarette's last name:

Surprising precisely no one, Jessica and Mark are not together. In fact, the cast members from season one are both in serious relationships with other people.

In September 2021, Jessica got engaged to her partner of 18 months, foot and ankle surgeon, Dr Benjamin McGrath.

"I don't think it has quite sunk in, but I'm definitely floating somewhere on cloud nine," Jessica told People. "It's been really, really exciting!"

She also has her own podcast, The Unsettled.

Mark, on the other hand, has been involved in quite a bit of relationship drama since the show.

After season one aired, he casually dated Lauren "LC" Chamblin, another cast member from the show, for two months in 2020. According to People, the couple called it quits after Mark was caught cheating through a Reddit post LC found titled, "My close friend's co-worker is dating Mark!"

Mark then denied ever being in a relationship with LC.

"I enjoyed spending time with LC for a few weeks, but at no point were we in an exclusive relationship," he said.

Responding to an E! News Instagram post about Mark and LC, Jessica told a commenter that Mark had cheated before.

"Mark was sleeping with multiple women at the studio he trained at during the show. Maybe show those interviews with his workers next time @Netflix," the commenter wrote.

While Jessica replied: "Wow. News to me. I only knew about one."

Since then Mark has settled down with his new partner, Aubrey Rainey.

The couple got engaged in November 2020, welcomed their first child in April 2021, and their second in February 2022.

Giannina (Gigi) and Damian's relationship post-Love is Blind has been just as much of a rollercoaster as it was on the show.

After Damian called it quits at the altar, the couple tried to work things out and got back together.

"After the wedding, I felt like we weren't done. There was still some unfinished business. So I reached out to him a couple hours afterwards," Gigi told Entertainment Tonight.

"I was just like 'I need to know what happened.'"

A year and a half after the show originally filmed, Gigi and Damian were reportedly dating again. But in 2021, they officially ended it.

Now, according to People, Gigi is dating ex Bachelorette contestant, Blake Horstmann. The new couple met while filming a competition reality TV series, which is set to air on Paramount+ later this year.

They have not posted together on social media just yet.

As for Damian, despite having a brief fling with Too Hot To Handle star Francesca Farago (who he brought to the reunion special), he appears to be single.

Barnett overcame his 'cold feet' on his wedding day to marry Amber, and it seems like the couple have made it work ever since.

During the reunion episodes, the couple discussed having children and Amber has reportedly changed her last name to Barnett.

"This third year was definitely charmed, and judging by the pics I’d say we’ve got this kissing thing down pat! If it’s cool with you though I’d like to keep practicing."

Yes, you can breathe a sigh of relief, because Lauren and Cameron aka Netflix's royal couple are still going strong.

In November 2021, they too celebrated their third wedding anniversary.

"A love story I could have only dreamed of... not perfect but perfect for me! Cheers to three years of love, marriage and happiness," Lauren wrote on Instagram.

"Us against the world forever. Happy anniversary baby!"

The couple have since started their own YouTube channel, released their own book, Leap of Faith, and in February 2022, Lauren started her own podcast, We Have The Receipts, where she interviews reality TV contestants from shows including Love is Blind.

There have also been rumours that the couple will get their own spin-off show, however, nothing has been confirmed.

As for their personal life, Lauren wants people to stop asking when they'll have kids: "One of the tough things is people really want to see us have a baby," she told Elle in February.

"And they don’t think about it from our perspective and what that might mean to us. So there’s a lot that has to be done to just try to block out all that noise and focus on each other."