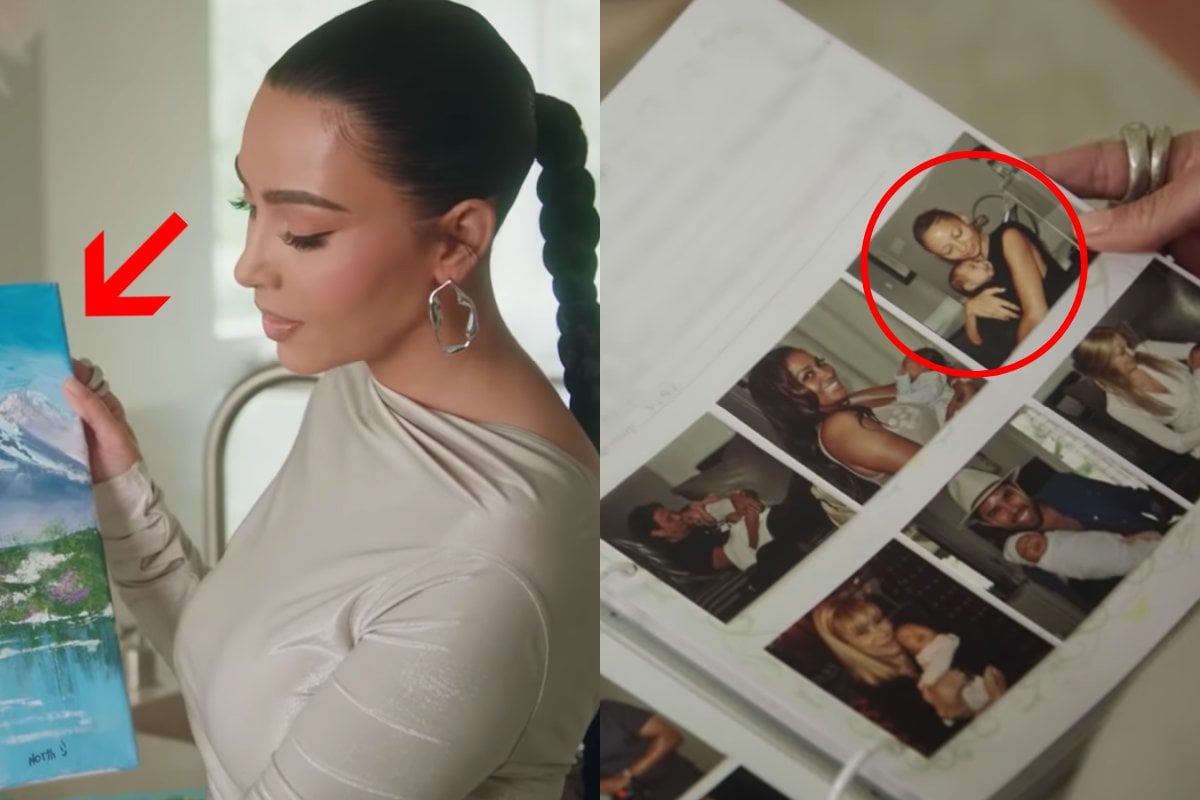 If there's one thing the world needs right now, it's another tour of Kim Kardashian's very austere, monochromatic home. Remember the fridge incident of 2020? What a time.

Appearing in Vogue's new video series, 'Objects of Affection', the reality TV star walked viewers through her Calabasas family home, detailing the things she cherishes most.

While there are elements of her minimalist space that look familiar, Kardashian admitted she's changed things up since purchasing the house off her ex-husband Kanye West for a whopping $32 million AUD last year.

"Hey Vogue it's Kim, we're here in my home, once again," the reality star said at the start of the video, before adding: "A few things have been updated."

Here are 8 pressing things we noticed as she walked us through the house.

1. Everything is still so white.

Kim Kardashian and ex-husband Kanye West first allowed Vogue inside their home in 2019, leaving all of us shocked by just how minimal and neutral their space was. 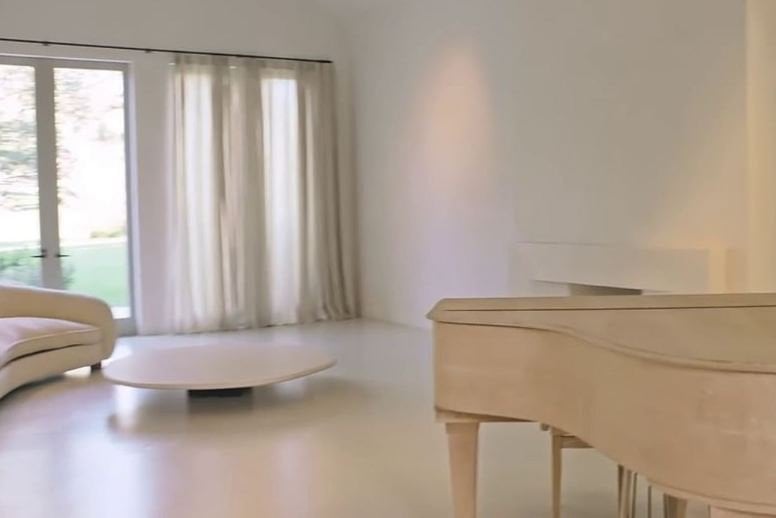 And no, they had not just moved in. Image: Vogue.

Three years later, and without West living at the residence, Kardashian appears to have left it that way.

"Everything in my house is really minimal," she said at the beginning of the video.

"I find there’s so much chaos out in the world that when I come home, I want it to be really quiet and I want everything to feel calming." 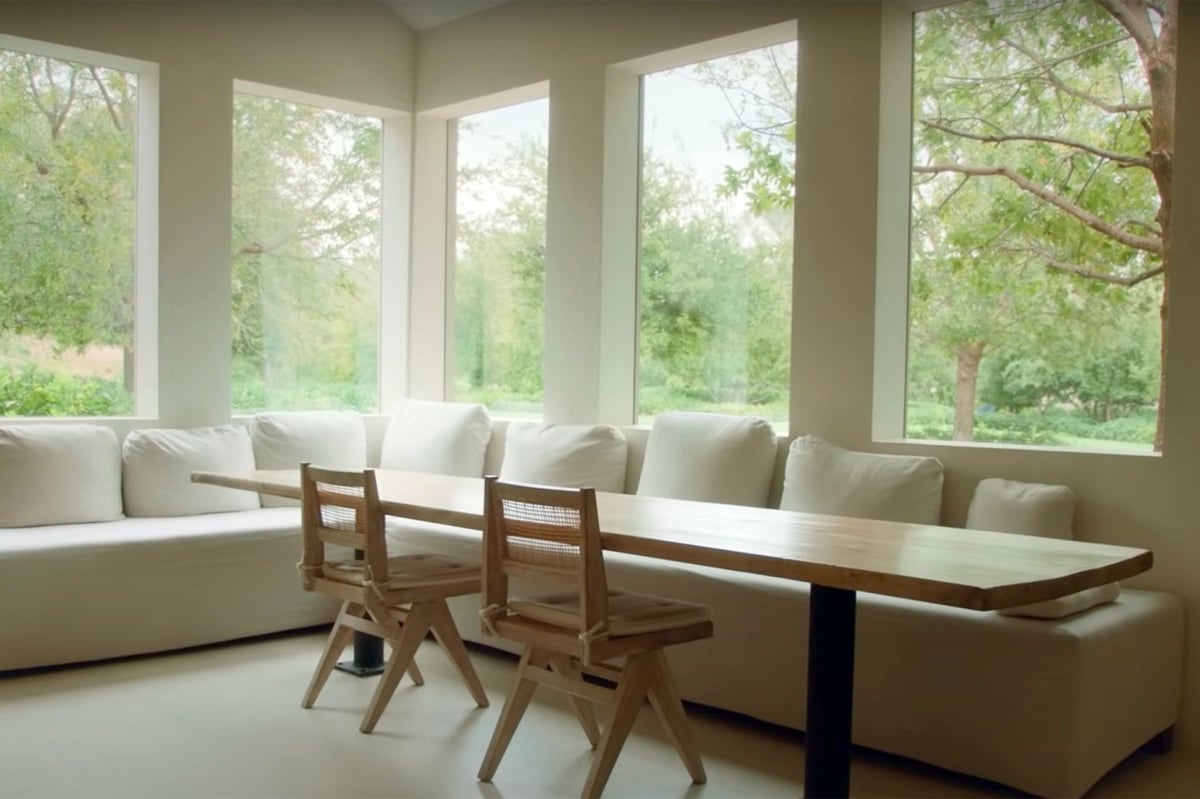 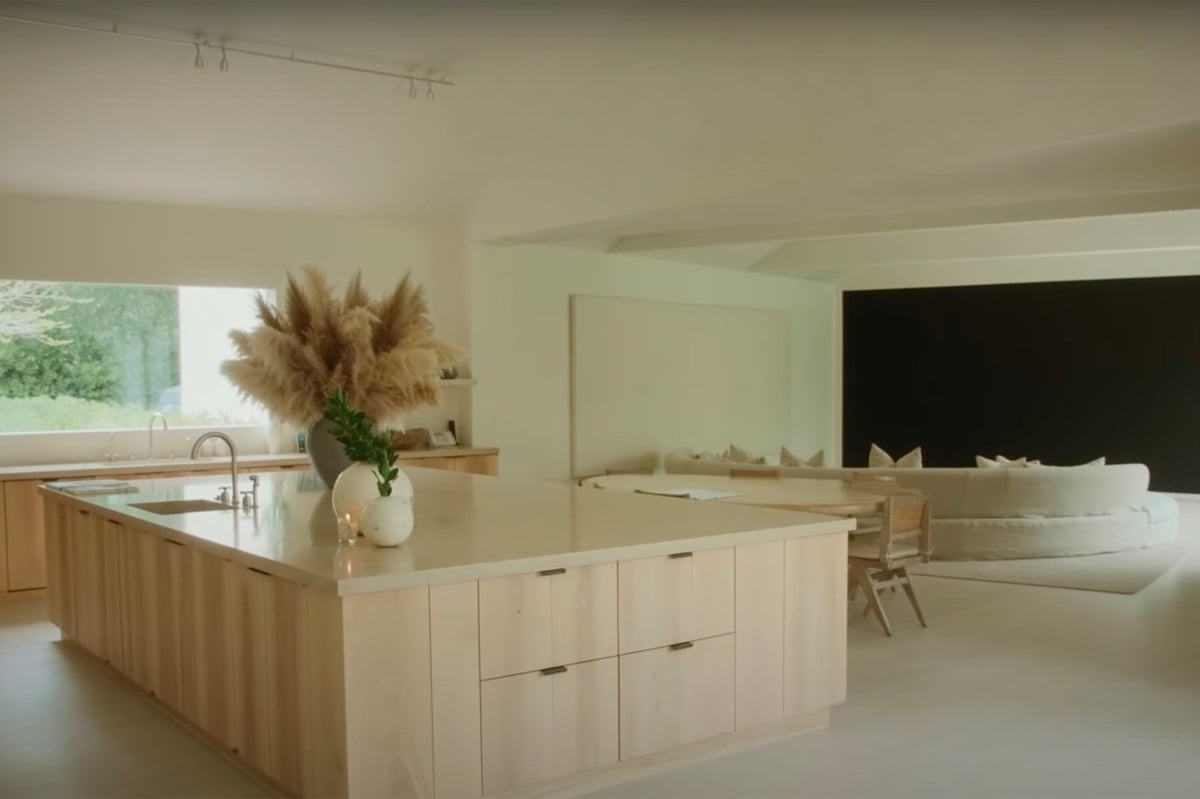 The Skims entrepreneur admitted she changed things up slightly by adding art (which she didn't go into detail about or show) and noted that she allows her kids - North, eight, Saint, six, Chicago, four, and Psalm, two -  to add colour to their bedrooms.

"Each kid can have their full style and taste in their bedroom and have so much fun, but in the main house, I really like the calmness," she said.

And she's not kidding. This is North's very pink bedroom:

The first "object of affection" Kardashian shared was her eldest daughter North's paintings and drawings.

The first painting she showed off was a controversial landscape North painted two years ago, which had the internet divided over whether her daughter actually painted it. 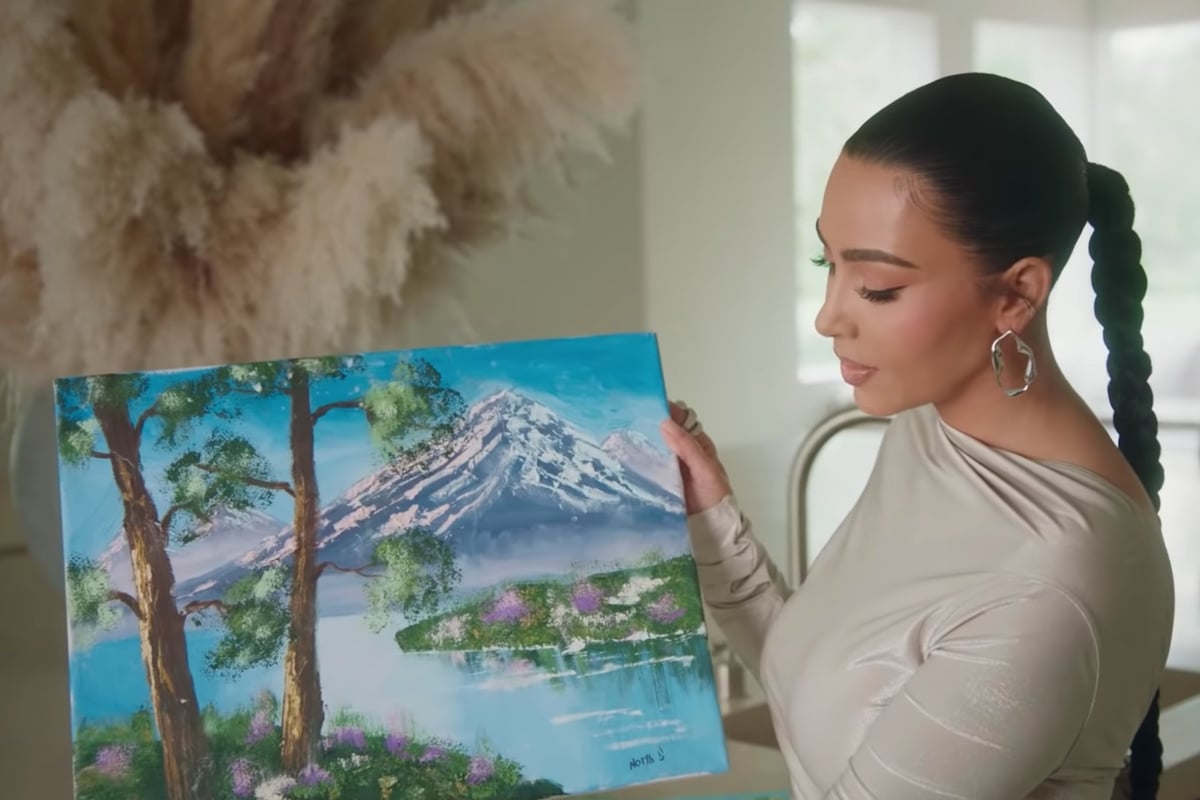 She also shared North's slightly terrifying self-portrait she made when she had COVID.

"It's a charcoal, maybe that was just her emo mood," Kim said. 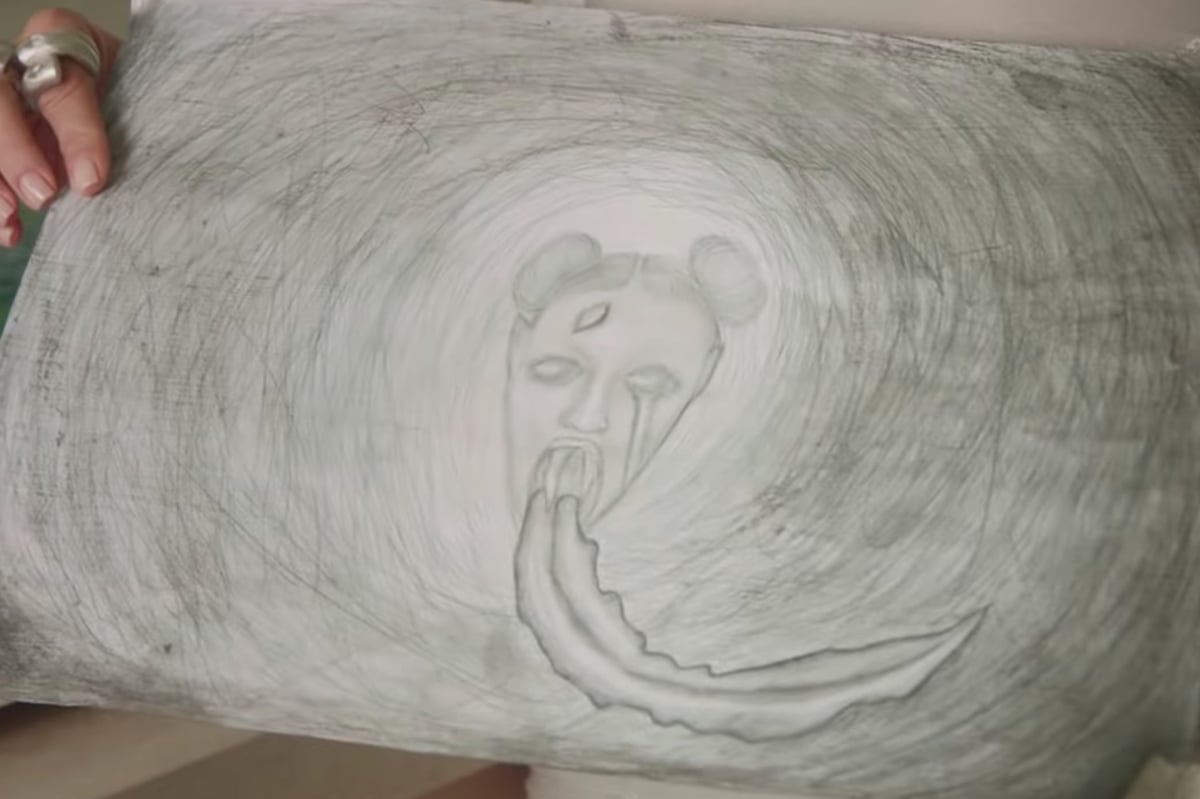 After walking the camera through her house and into her sitting room, Kardashian sat down and showed viewers the baby books she has for each of her kids. It's pretty cute.

Each book includes details like their hospital documents, her pregnancy and birth announcements for each of them and photos from when they were born. 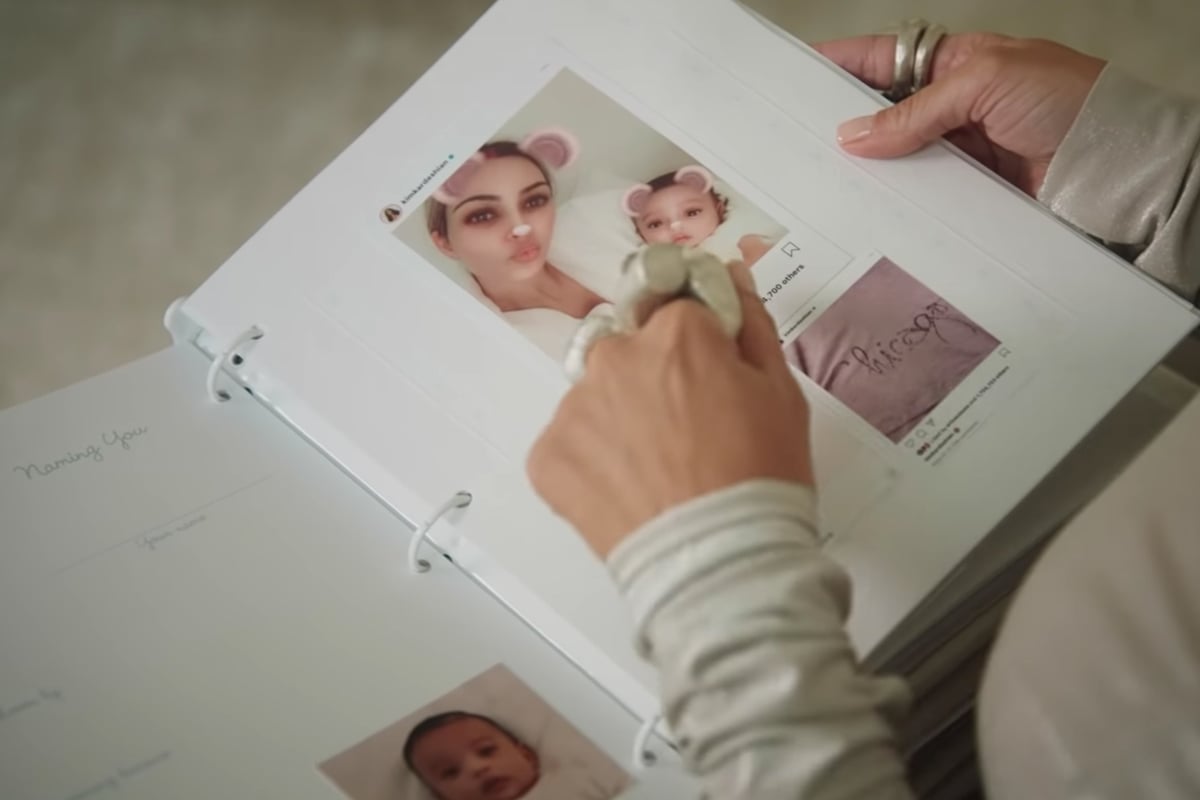 "Snapchat was such a thing." Image: Vogue.

When flicking through North's baby book, Kardashian showed a page of photos from the day she was born, and we couldn't help notice some familiar faces.

Holding North on the far right is Nicole Richie and in the centre, fans are certain they spy Jay-Z and Beyoncé. 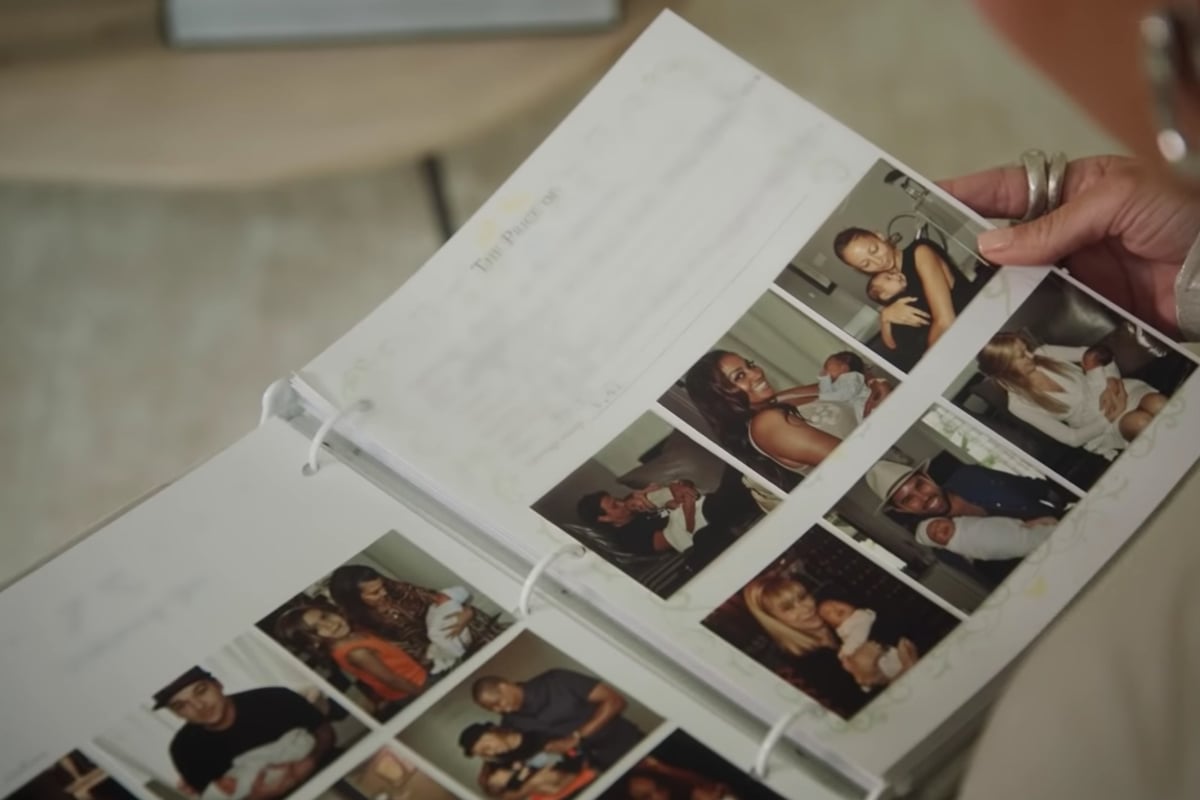 Queen B, is that you? Image: Vogue.

Not only does the reality TV star keep mementos for each of her children, but she's also holding on to a suitcase full of memories of her own.

Following the baby books, Kardashian explained how her mum, Kris Jenner, made each of her daughters a trunk with things from their childhood inside. 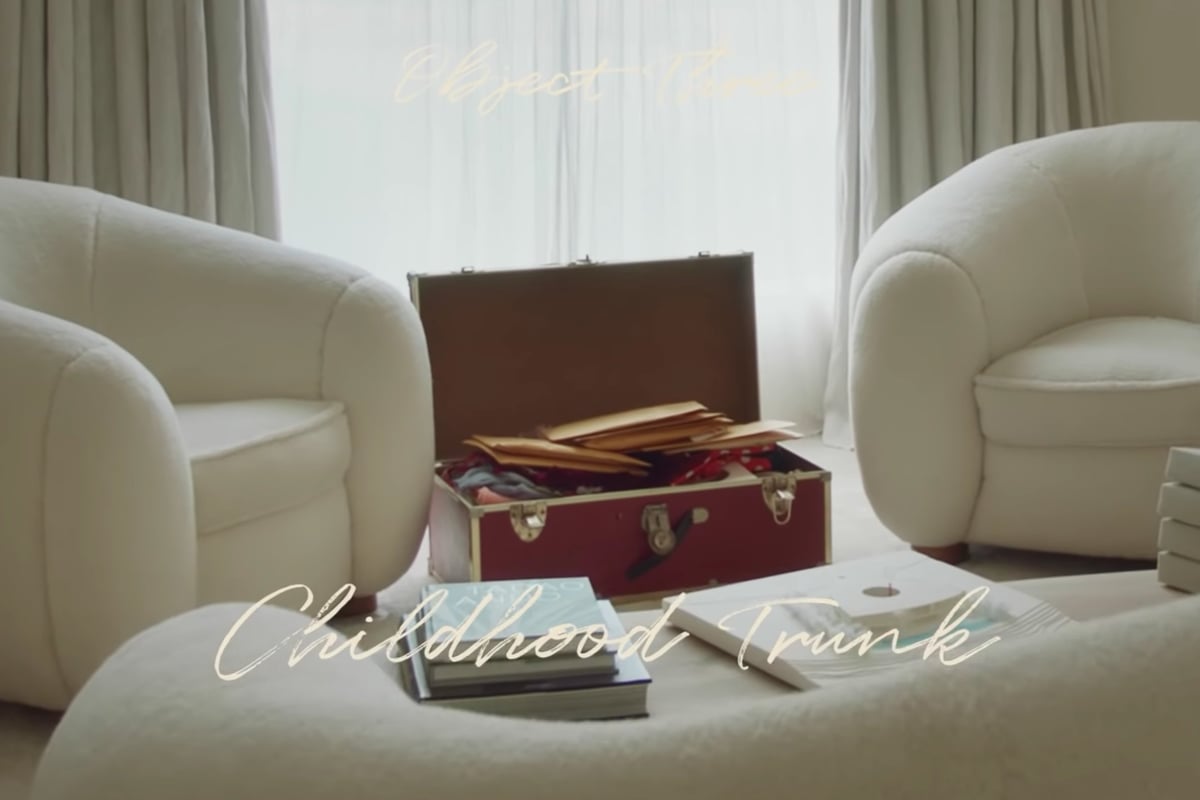 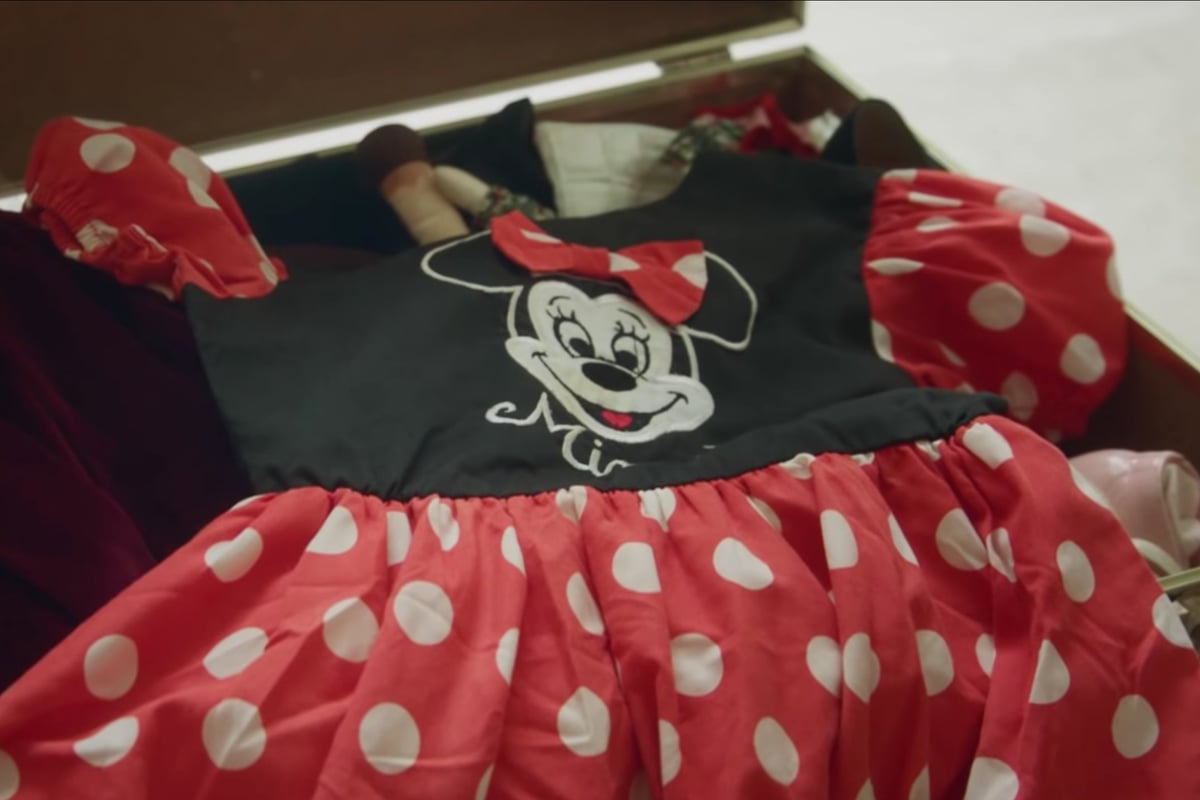 While going through the box, Kardashian also whipped out her own hair. But wait, it's kinda sweet.

During a preview clip at the start of the video, Kardashian held a zip-lock bag with a ponytail of her hair inside. 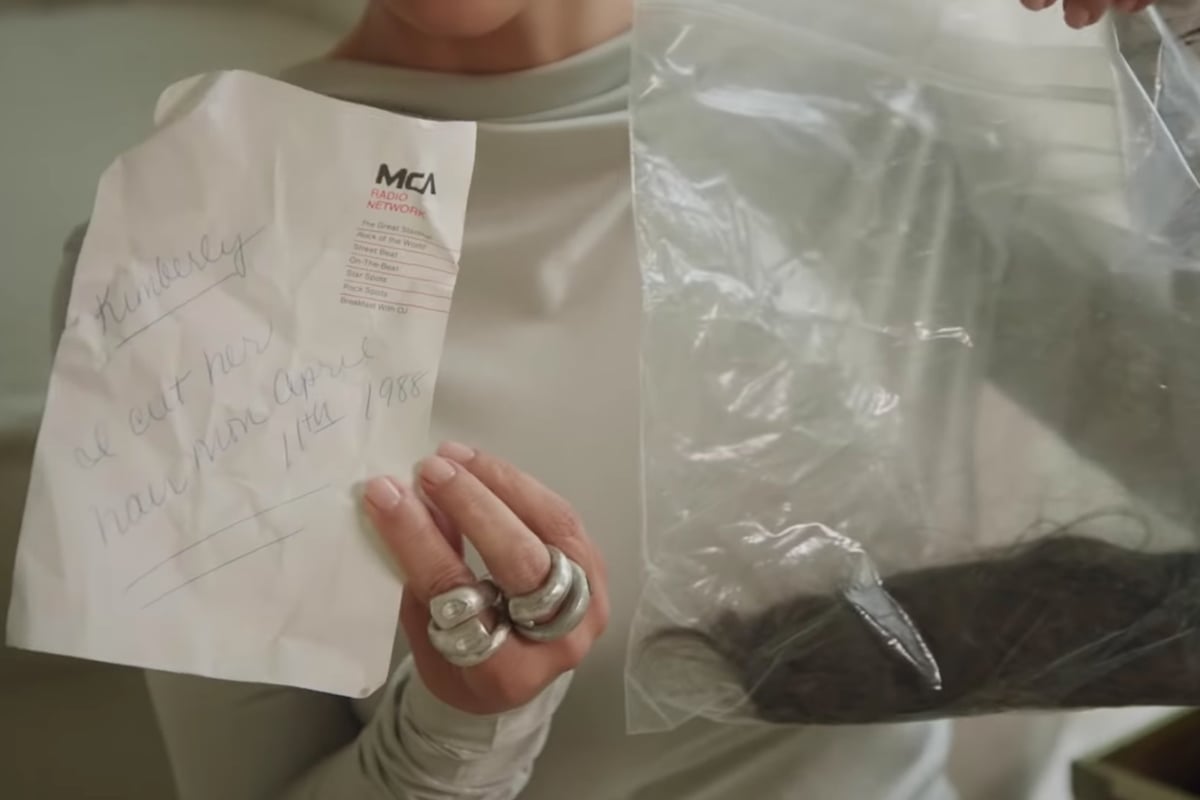 Her father, Robert Kardashian, passed away in 2003.

6. The neutrals extend to the outside.

Kardashian later walks outside and towards the basketball court. And surprise, surprise, it's monochrome. 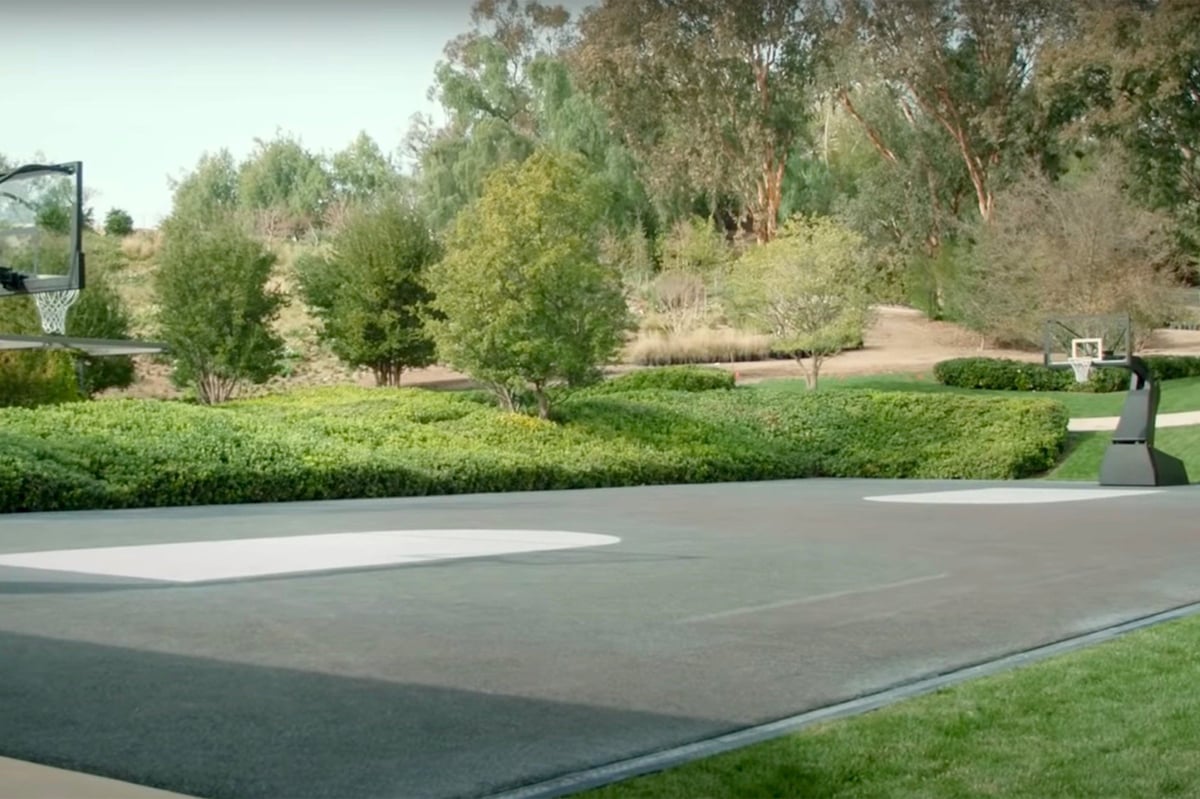 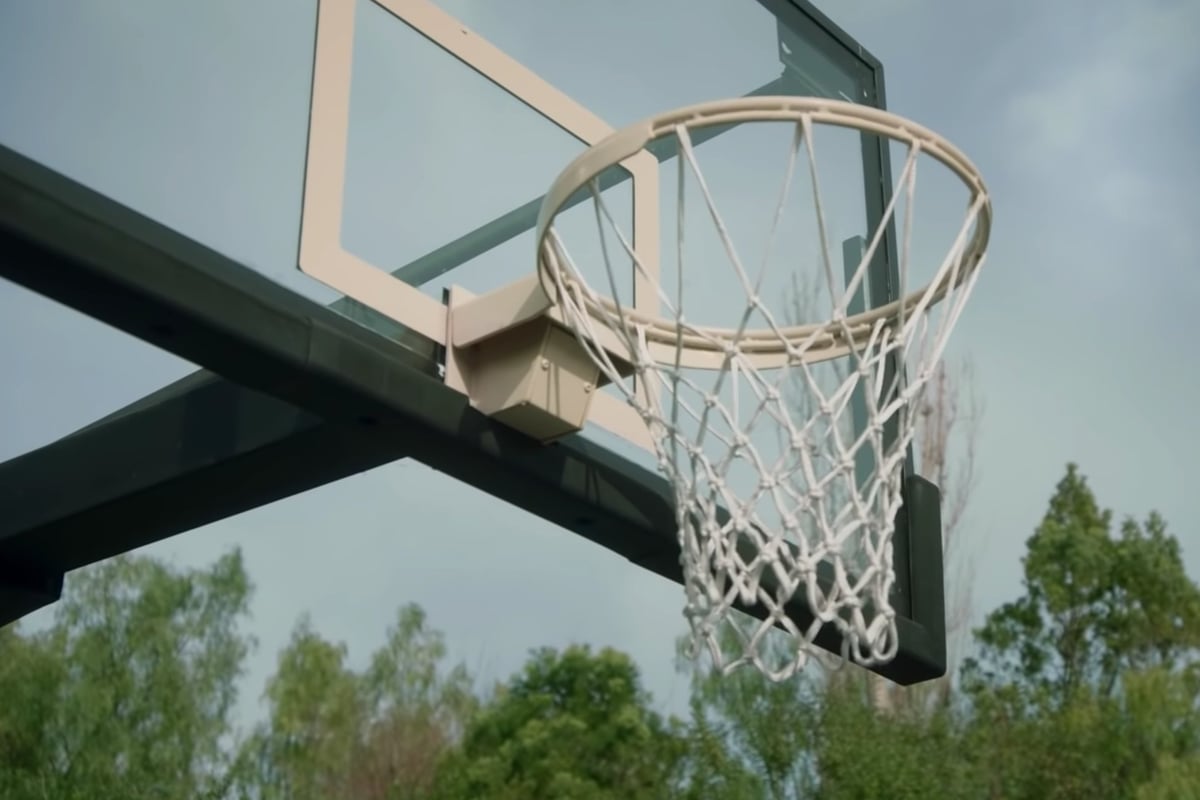 Of course, it's beige. Image: Vogue.

"I just wanted it really neutral," she confirmed.

"All my gym equipment is black, so the court is black, the basketball hoops are black with a cream little box and hoop."

7. She has a giant vegetable garden.

Remember Kris Jenner's all-green fridge? Well, we might've discovered where all that produce comes from.

While standing on the court, Kardashian motioned to a meadow above her garden that includes a huge veggie garden. 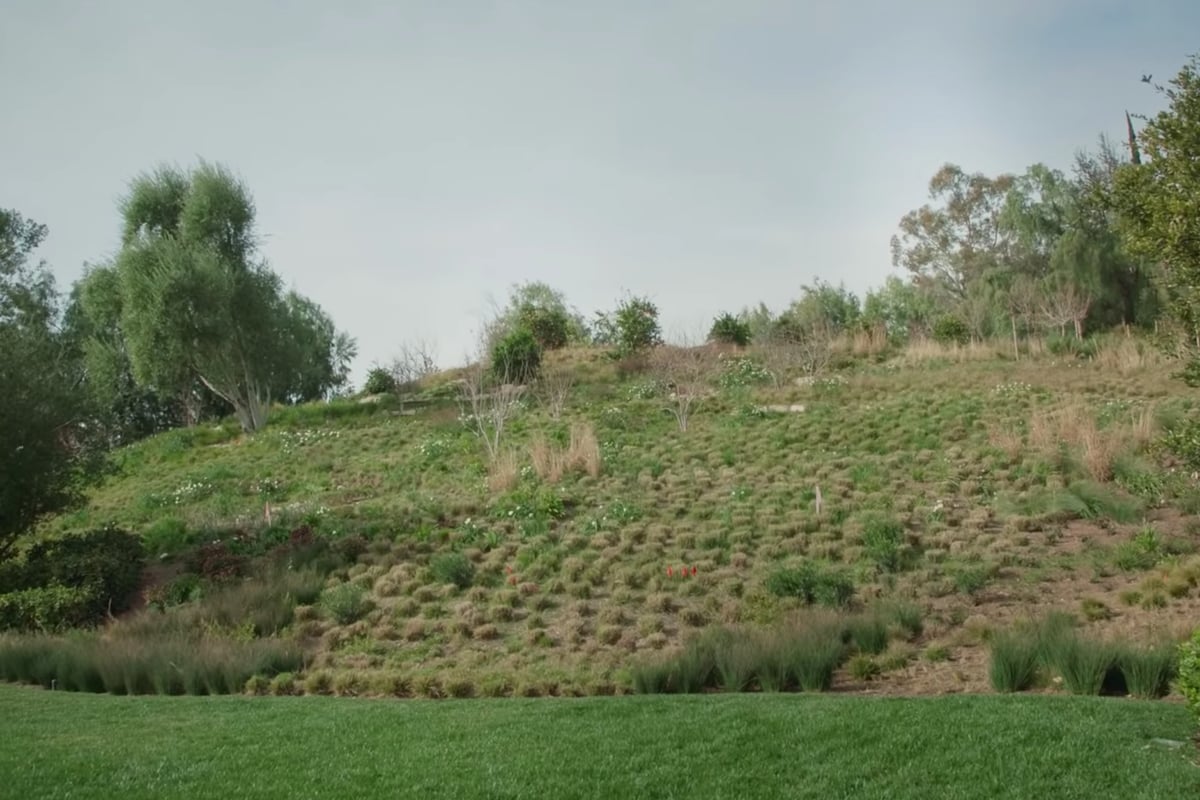 She shared that her children and their cousins regularly pick fruit and veggies.

"They just see how you can like, really farm, and eat it," she said.

Kardashian ended the video by showing off her impressive car collection (well, her three favourite). And they too are colour coordinated.

There's her Lamborghini Urus, Rolls-Royce, and her favourite, a Maybach Sedan. 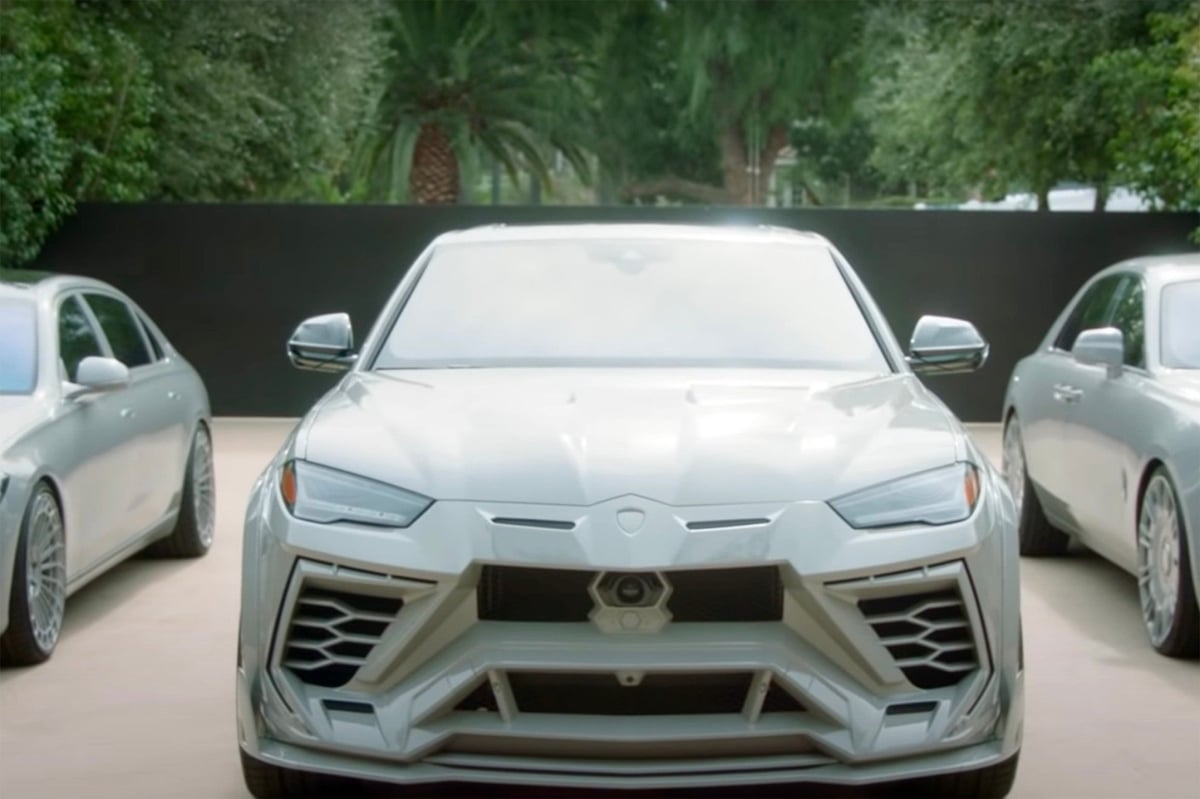 "I wanted my cars to kind of blend in with my house... so I did all grey cars instead of my typical matte silver that I used to do," she said.

Watch the full video with Vogue and Kim Kardashian here.