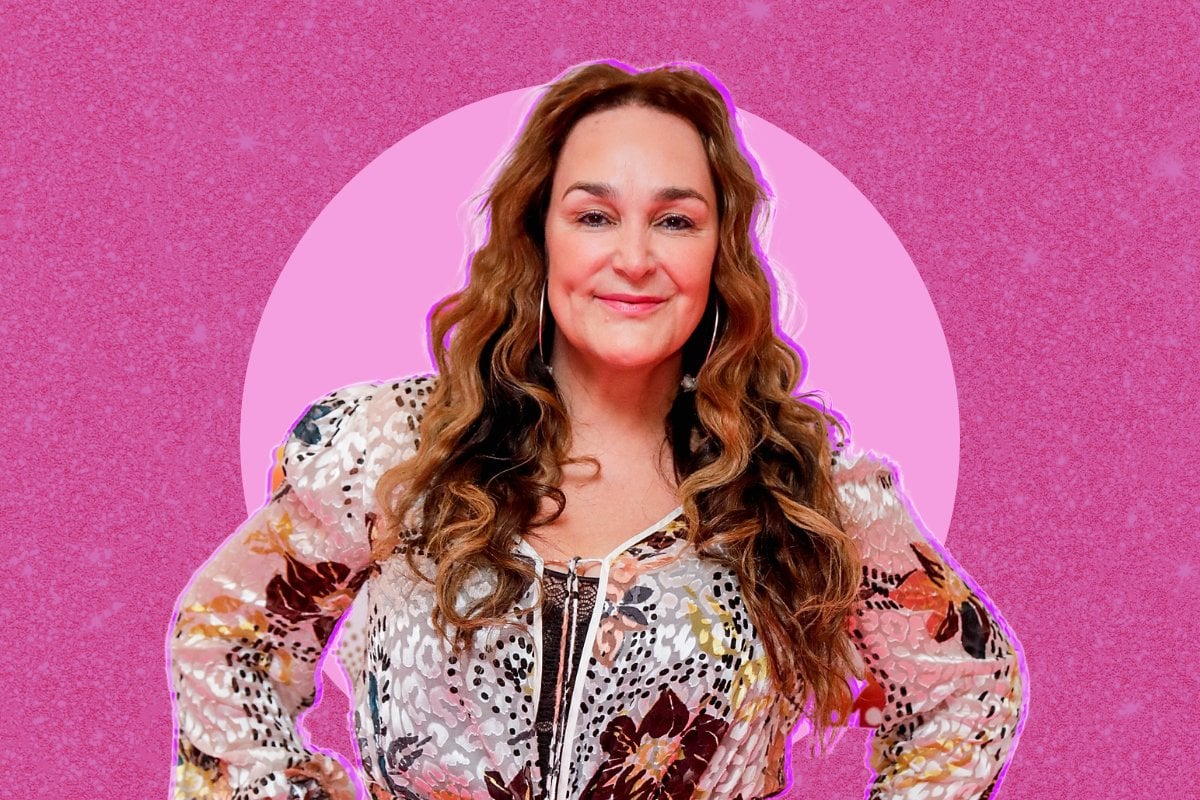 From the outside looking in, Kate Langbroek's decision to move her family of six halfway around the world to Italy may have seemed a crazy one.

First of all, moving four children - including teenagers - anywhere is not easy. Let alone to a whole new country, with an entirely new language and culture. Then there was her job as a radio host with Dave Hughes - the kind of dream media job you stay in for life. But for Langbroek and her husband Peter Allen Lewis, it all made sense.

Langbroek grew up as a Jehovah's Witness and moved around a lot with her migrant parents. She was used to being an 'outsider'.

"I realised in retrospect that was formative for me to have gone to different places and to meet different people and to have had to start a new, not that it was easy," Langbroek told Mamamia's No Filter podcast.

"But if I then look at life, anything that I've ever done that's been worthwhile has not been easy. Nothing.

"I would say to Peter all the time, because it was such a sh*t show trying to get there, with visas and blah, blah, and schools, and there's six in our family. So anything we do, it's complicated, and Italy is also a complicated place... I'd go 'People do it all the time. It's totally possible, people do it all the time'. And then one day, Peter said to me, 'Darlin', who do you know, that's actually done it?' was like, 'Oh'.

The decision to up sticks came a few years after Langbroek went public about their now 18-year-old son Lewis' three-and-a-half-year journey with cancer.

Lewis was six when he was diagnosed with T-cell acute lymphoblastic leukaemia in 2009.

Langbroek and Lewis had three other children under six, including their youngest son Jan, who was just a few months old. For three-and-a-half years, hospitals and doctors became the family's new normal.

For most of the time, Langbroek continued to work on her radio show with Hughesy. She would turn up to work and make people laugh, even while going through the darkest of times.

"There still was a lot of funny stuff in life. There still was, and there had to be. Not cancer, obviously," she recalled of that time.

"One of the things that they said to us at the hospital when Lewis was first diagnosed - it sounded impossible - they said 'You have to live a normal life'. Louis was diagnosed in the December and so we had that entire eight weeks or whatever before there was even a question of going back to work.

"And the doctors and nurses were like, 'You have to go back to work, you have to live a normal life'. And we were like, 'What? How?' Nothing felt like it could ever be normal again. And then one of our doctors said to us, 'If you don't live a normal life, what are you telling your child? And what are you telling your other children?' Who would ever have thought of it from that point of view? So that's what we endeavoured to do."

So within that time, Langbroek's work became a 'gift' to her.

"Work is a salvation. It really is, and so [it] became a place for me where I would have three hours, very early hours, that weren't about cancer. So it was good for me as well. And then, you know, sometimes Hughesy would come into the hospital straight after work or [the pair's long-time producer Sacha French] would come in, so it sort of blended into our world. When Lewis was down we were all down. And when Lewis was up, we were all up."

On August 8, 2013, after more than three years of keeping it quiet, Langbroek told her listeners about what had been going on.

Lewis is still monitored regularly, but he has been cancer-free since 2013.

"We all have a cloud over us," Langbroek explained. "And most of us just don't know what that cloud is. With Lewis, we know what the cloud is."

At the beginning of 2019, after more than a year of discussion, the entire family moved to Italy.

"It wasn't like, 'Oh, we have to go live in Italy because our son nearly died'. It was never that. Most motivations are never that overt, are they? They're subtle," Langbroek said about the decision.

"But for me, I think it was because 'Why did I have this compulsion to do this?' I had the greatest job in the world, a beautiful relationship with my co-host and Sach... and my family and Peter's family. There was no 'got to get out of dodge'. Other than what Peter and I both craved, which was some kind of reset.

"Peter doesn't think it's got so much to do with Lewis. But for me, it meant something about life. And also the way the Italians live. Something from the first time we went there, I was just like, 'Oh, my goodness'.

"It just piles cliche on cliche. It's just phenomenal. And something about the richness of their life just called me. Peter was even like, 'You won't go, you won't stop, you can't stop work, you won't give up your job, no one gives up a job like you've got like'. You know what radio's like, people get carried out in boxes or pushed down the stairs. It's unusual. And I was like, 'I will. Oh, I will. And I did.'"

The family spent a year in Italy before the COVID-19 pandemic took hold, which trapped them in the country and forced them into strict lockdowns.

"It came upon us so suddenly. My husband and I were in Venice for a weekend away... when they shut down Venice. We were going to a fancy dress ball, we were going to Carnivale, and even that wasn't scary because it happened so suddenly. We made haste to book our tickets back to Bologna because I was like 'what happens if they shut borders or whatever'. So I felt this fear. It was big fear."

Ultimately, the family had the decision to remain in Italy throughout 2020 made for them.

"When they announced they were stopping flights, Peter and I had been investigating getting flights back to Australia, but then the decision was made for us because nobody in Europe would let us transit because we were Italians," Langbroek said.

In July 2020, Langbroek and Lewis returned temporarily to see her sick father, and then the entire family moved back in December.

"Australia changed a lot when we came back. So I can't tell now at what point I've changed," she said.

But there was a reason she hadn't rushed back into a full-time media job.

"The reason I didn't come back and do a breakfast show again with Hughesy was because I didn't want to work at that breakneck speed again... The greatest gift you can give yourself, I believe, is the gift of time, and that's changed in me.

" And not to say I wouldn't ever do it again, but at the moment I can't believe who I was when I surrendered to lockdown in Italy. It was such hard work, but of a different kind that I'd never done before. I loved who I was, and I loved how I felt."

Ciao Bella! Six Take Italy by Kate Langbroek is out now. You can listen to Kate's full interview on No Filter with Mia Freedman here.