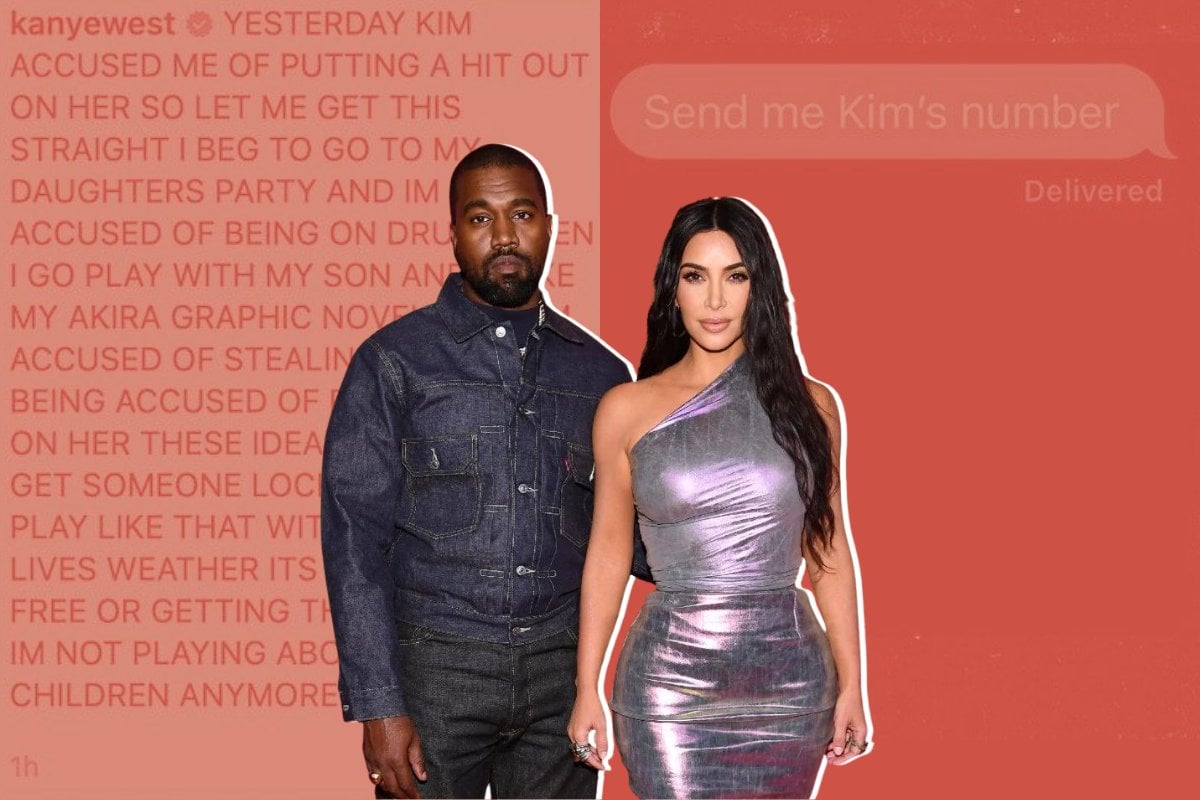 Wherever Kanye West goes in 2022, the drama follows.

Last month, the rapper debuted his new relationship with Julia Fox, taking her on their second date, where he directed a photoshoot for the actress in a New York City restaurant.

Oh, and did we mention Fox wrote about the date for Interview magazine?

The following week, the rapper who recently returned to Instagram, told his 10 million followers he wasn't invited to his daughter Chicago's fourth birthday, before eventually receiving the party's address from Travis Scott.

"I just came from Chi's party and I just gotta shout out to Travis Scott for sending me the address and the time, and making sure that I was able to spend that birthday memory with my daughter to be there with the rest of the family." 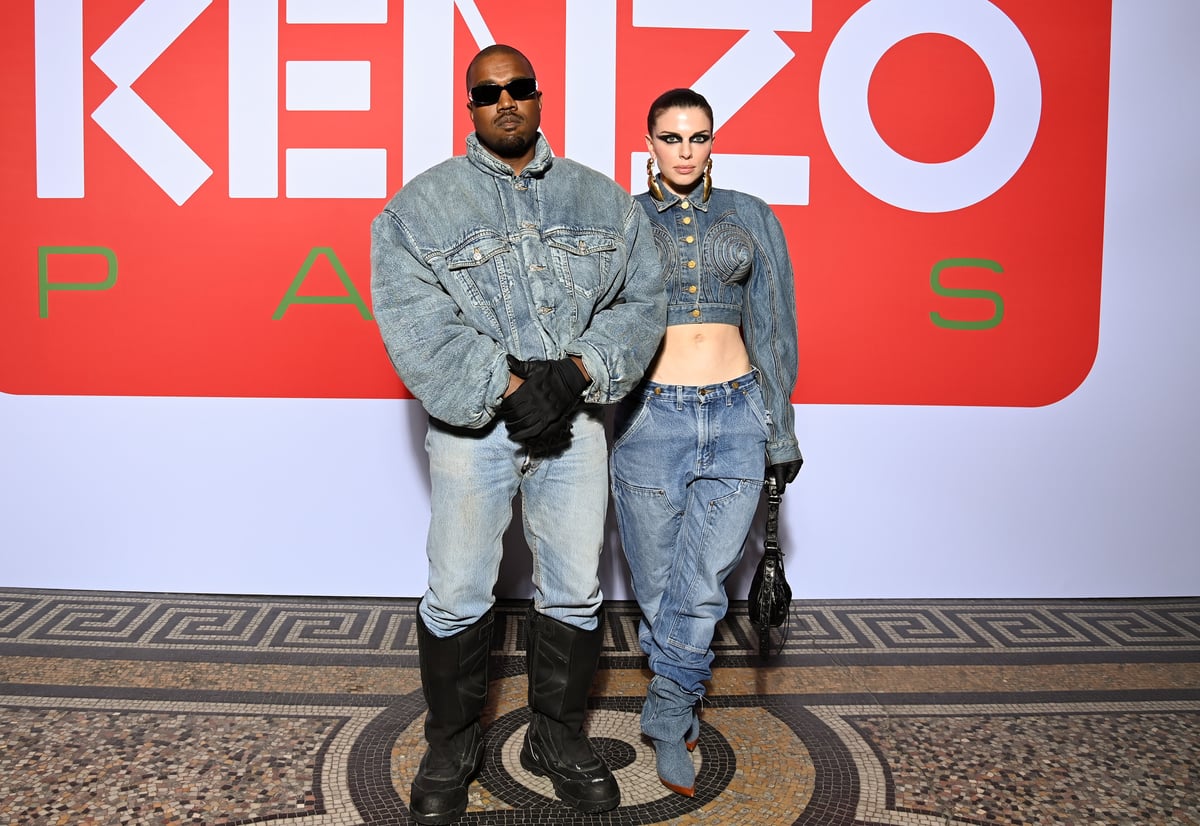 Kanye and Julia Fox at the Kenzo Fall/Winter 2022/2023 fashion show. Image: Getty. On January 25, the rapper continued to make headlines, but this time, alongside his ex-wife Kim Kardashian.

In a two-part interview with Hollywood Unlocked, Kanye West made claims about his wife, their kids, and a laptop owned by Kardashian's ex-boyfriend Ray J.

In the first part of the interview, West said he was prevented from coming into Kardashian's home to see their children because her new boyfriend, SNL comedian Pete Davidson, was there. (Kardashian's rep has denied Davidson was there but acknowledged security denied West from coming inside as he was unannounced.)

Then in the second segment of the interview, the rapper claimed that he recently helped prevent further explicit footage of Kardashian and Ray J from leaking. 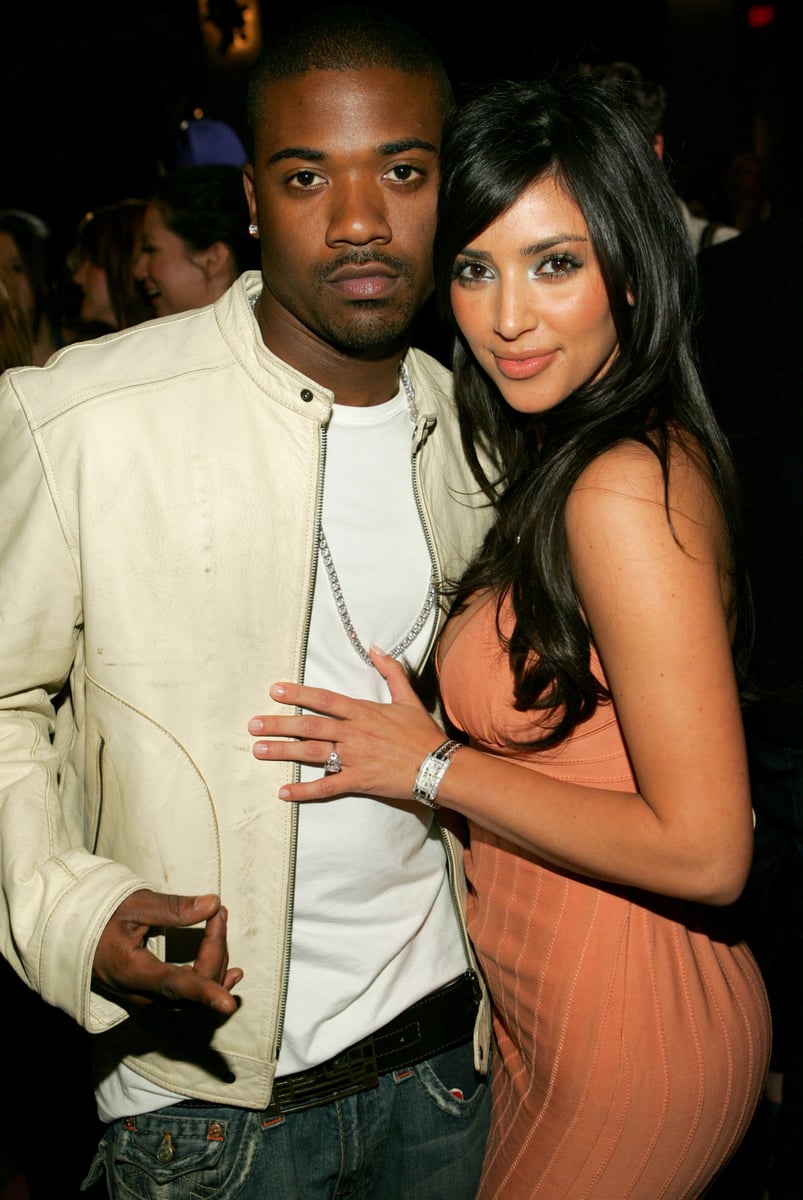 "How you gonna bring me to SNL and kiss the dude you're dating right in front of me? And everybody's like, 'Oh that's cool,'" West said during the interview, referring to Kardashian kissing Davidson in a skit.

"After I went and got the laptop from Ray J myself that night and then got on a red-eye [flight]. I met this man at the airport, and got on a red-eye, came back [and] delivered it to her at 8am in the morning."

"And then, I gave it to her, and she cried when she saw it," he continued.

Kardashian's reps have denied there is a second sex tape, writing in a statement that there was nothing "sexual unseen" on the computer West retrieved.

"After review, there was nothing sexual unseen, only footage on the plane on the way to Mexico and footage at a club and restaurant on the same trip," the rep said in a statement obtained by People.

"Kim remains firm in her belief that there is no new second tape that exists. After 20 years, she truly wishes to move on from this chapter with focus instead on the positive things she continues to do as a mother, entrepreneur and advocate for justice reform."

Meanwhile, when asked for a comment on the situation, Ray J tweeted: "This needs to stop. I also have kids."

Things became even more public on February 4, when West told his 10 million Instagram followers that his daughter, North West, was on TikTok against his wishes.

"Since this is my first divorce I need to know what I should do about my daughter being put on TikTok against my will," he wrote alongside a screenshot of the TikTok account, which North shares with her mum.

Kanye West takes to Instagram to speak out against his and Kim Kardashian's daughter North West's presence on TikTok:

“SINCE THIS IS MY FIRST DIVORCE I NEED TO KNOW WHAT I SHOULD DO ABOUT MY DAUGHTER BEING PUT ON TIK TOK AGAINST MY WILL ?” pic.twitter.com/lXl5EVCyEp

Kardashian has responded in a statement on her Instagram Stories, where she called out her ex-husband's "obsession with trying to control and manipulate" their divorce.

"Kanye's constant need for attacking me in interviews and on social media is actually more hurtful than any TikTok North might create," she wrote.

"As the parent who is the main provider and caregiver for our children, I am doing my best to protect our daughter while also allowing her to express her creativity in the medium that she wishes with adult supervision — because it brings her happiness," she continued.

"Divorce is difficult enough on our children and Kanye’s obsession with trying to control and manipulate our situation so negatively and publicly is only causing further pain for all."

Kardashian went on to say that from the beginning, she's always wanted a "healthy and supportive co-parenting relationship" for the sake of the couple's four children. 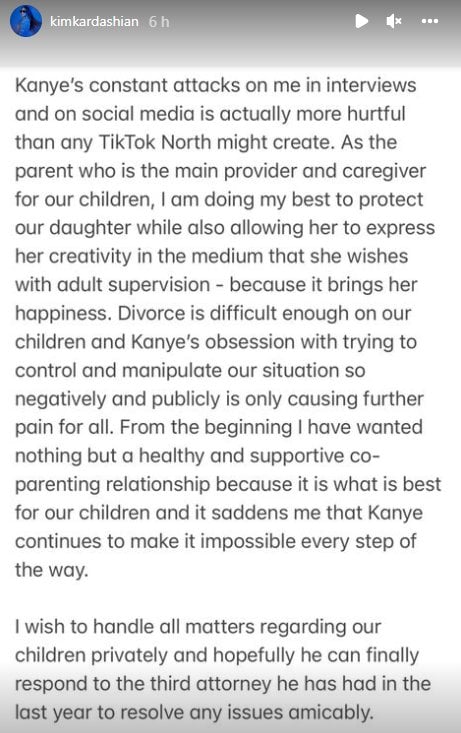 "I wish to handle all matters regarding our children privately and hopefully he can finally respond to the third attorney he has had in the last year to resolve any issues amicably," she concluded the post.

West was quick to respond to Kardashian's statement in a post of his own, where he accused her of trying to "kidnap" their daughter, Chicago.

"What do you mean by main provider?" he wrote on Instagram, alongside a screenshot of Kardashian's Instagram story.

"America saw you try to kidnap my daughter on her birthday by not providing the address," he continued.

"You put security on me inside of the house to play with my son then accused me of stealing. I had to take a drug test after Chicago's party cause you accused me of being on drugs. Tracy Romulus, stop manipulating Kim to be this way," he added, referring to the Chief Financial Officer of Kardashian's brands.

He later posted a screenshot of TikTok's guidelines on Instagram.

A day later, he said Kardashian accused him of putting a hit out on her.

"These ideas can actually get someone locked up," he said in an all-caps caption.

"They play like that with Black men's lives, whether it's getting them free or getting them locked up. I'm not playing with my Black children anymore."

He also exposed messages he claimed were from one of Kim's cousins, who offered him her support and then asked where she could buy a pair of Yeezy shoes.

"I do this is for every parent on either side whose kids' futures are being one-sidedly controlled," he wrote.

"I gave that family the culture. If they as a whole unit keep playing games with me I will take that culture back. A father should never have to beg for the location of their children."

"THIS IS AN EXAMPLE OF KIM’S COUSIN AGREEING WITH ME ABOUT TIK TOK THEN PROCEEDING TO ASK ME FOR SOME YEEZYS AFTERWARDS HER OTHER COUSIN KARA CALLED ME SAYING SHE AGREED WITH ME THEN SAID SHE WOULD SPEAK OUT PUBLICLY WHICH SHE NEVER DID THEN SHE SUGGESTED… pic.twitter.com/lBYwt3x6Q5

Most recently, West shared screenshots that show he has been given Kardashian's new phone number, so here's hoping that means the former couple will take things offline from now on.

He has since deleted all the posts about his family.

A
anastasia beaverhausen 6 months ago

Reply
Upvote
I feel like we should talk more about how Kanye bought Julia Fox an entire new wardrobe for their first date. Controlling much? I feel like he needs a lot of help in a lot of areas.
L
laura__palmer 6 months ago