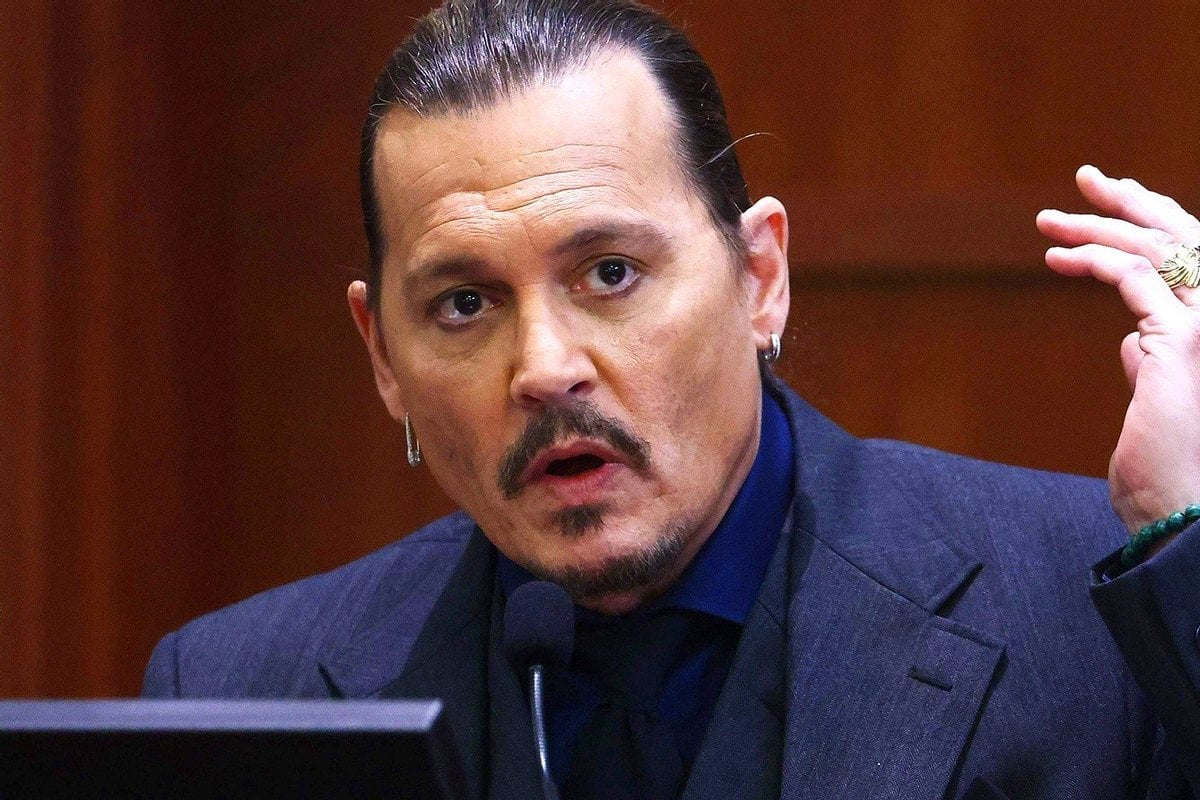 Over the last three weeks, the strangest thing has happened.

The Internet, despite its insistence to fight about everything, has come to an agreement. A unanimous conclusion. There's even a hashtag.

Actor Johnny Depp is a victim.

His ex-wife, Amber Heard, is not only a liar, but according to the internet, a perpetrator of domestic violence herself. In less polite terms, she is described as a deceptive, mentally ill 'lesbian' who manipulated Depp in order to further her career in Hollywood, before routinely abusing him and then accusing him of the very crime she perpetrated.

We've heard the voice recordings. We've heard the tone of her voice when the actress says, "You can tell people it was a fair fight... see what the jury and judge think.

"Tell the world, Johnny, tell them, 'I, Johnny Depp, a man, I'm a victim, too, of domestic violence... and it's a fair fight'. And see how many people believe or side with you." 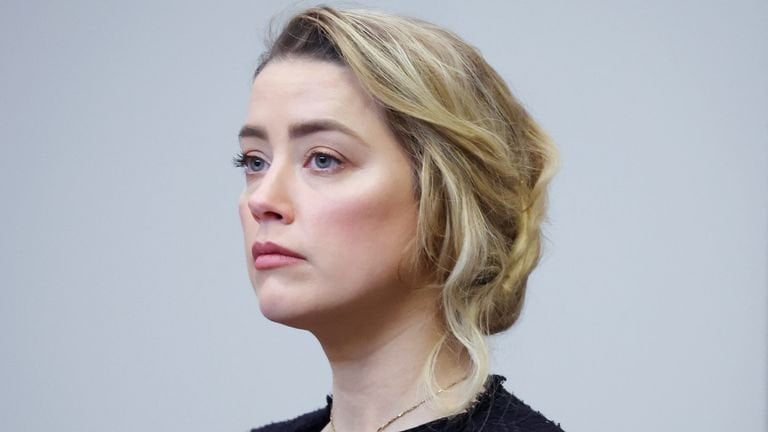 Amber Heard in the courtroom. Image via Sky News.

Heard's quote, alongside a sympathetic image of 58-year-old Depp, has gone viral. Everyone, apparently, believes him.

We've heard audio clips of Heard all but confessing to perpetrating physical violence.

"I can't promise I won't get physical again, I get so mad I lose it," she says.

Then there's the Los Angeles police officer who was called to the couple's home after an alleged incident, but never saw visible injuries on Heard or property damage to the apartment.

And don't forget the Forensic Psychologist Shannon Curry, hired of course by Depp's lawyers, who dismissed Heard's claims that she suffered from post-traumatic stress disorder. In fact, according to Curry, she appeared to be faking it. Instead, we learned, Heard likely suffers from borderline personality disorder and histrionic personality disorder.

According to Curry, Heard can be self-righteous, judgemental, quick to anger, and externalises blame.

And that is just the beginning.

At this point in the trial, there is significant and compelling evidence that Heard engaged in toxic and potentially abusive behaviour while in a relationship with Depp.

But be careful with your defence of Johnny Depp.

Watch Johnny Depp in the courtroom. Post continues below.

Curry, that Forensic Psychologist who also said under oath that borderline personality disorder "seems to be a predictive factor for women who implement violence against their partner," and stated there's a correlation with people who are physically attractive and "utilise their looks to get that attention," may not have been entirely objective.

In fact, Depp "wined and dined" her at his home before the trial. It was part of the "interview process".

You see, despite our cultural obsession with true crime dramas, we appear to have forgotten how a courtroom functions.

Depp - the plaintiff - has, over the last three weeks, had his say. His legal team have called their own witnesses. This has included Depp's longtime friend, Isaac Baruch, who became emotional on the stand, arguing that "it's not right what she did... it's insane".

Then there was Depp's sister who, unsurprisingly, also defended him.

We have not yet heard from the defendant.

While Depp has shared long-winded accounts of fights the pair had, characterising Heard as the aggressor and himself as the victim, Heard has remained silent. This is not because she doesn't have a defence. It is because her defence is waiting their turn.

People who have been following this story closely will know that this is not the first case between Depp and Heard. It is the second.

The outcome of the first case was definitive and damning.

The judge concluded that "the great majority of alleged assaults" Depp had been accused of were "proved to the civil standard".

Many of the incidents allegedly took place while Depp was under the influence of alcohol or drugs. He is believed to have slapped Heard across the face, kicked her in the back and thrown objects at her.

The judge concluded it was "more likely than not he pushed Heard on at least one occasion," and he accepted that Heard had been the victim of "sustained and multiple assaults".

Text messages were also presented during this trial, in which Depp referred to himself as a "f**king savage and a lunatic".

Those text messages, it seems, were just the beginning.

The man the internet is so passionately defending sent a text message to friend Paul Bettany back in 2013 which read: "Let's burn Amber!!!"

He added: "Let's drown her before we burn her!!! I will f**k her burnt corpse afterwards to make sure she is dead."

In a message to another friend, Depp wrote that he hoped Heard's "rotting corpse is decomposing in the f**king trunk of a Honda Civic."

A few years later, Bettany would defend Depp, describing him as "the sweetest, kindest, gentlest man I've ever known."

It is difficult not to make parallels to the times Depp defended his friends, Harvey Weinstein (a convicted rapist) and Roman Polanski (convicted of unlawful sexual intercourse with a minor). Bettany would certainly not be the first man in Hollywood to defend a criminal.

These text messages are - of course - not evidence that Depp was physically abusive to Amber Heard.

But they reveal something about how Depp speaks about women and the casualness with which he refers to violence.

In 2015, it is alleged that Depp sent text messages, potentially to Heard's sister, that read: "I never want to lay eyes on that filthy whore Amber."

He added that he would "smack the ugly c**t around before I let her in."

Then there was the time he called her a "slippery whore". And a "gold-digging, low-level, dime-a-dozen, mushy, pointless, dangling, overused flappy fish market". And hoped that "karma kicks in and takes the gift of breath from her".

He couldn't wait, he wrote in texts, to have that "waste of a c*m guzzler out of my life."

But Heard did this to him, his defenders cry. Her behaviour made him mad and brought out the worst in him.

His emails reveal that he also referred to his ex partner, Vanessa Paradis, as a "c**t" and a "French extortionist".

And then there was Ellen Barkin, Depp's ex-girlfriend who alleges he once threw a wine bottle at her head while they were dating in the 1990s.

This man, apparently the "gentlest man" Bettany has ever met, was also arrested in 1989 for assaulting a hotel guard.

Five years later, in 1994, an altercation took place in a hotel room he was sharing in New York with Kate Moss. The noise attracted authorities, who described the scene as horrific. "There was glass all over the place and furniture upside down and broken table legs," an officer later said.

But of course that was a long time ago.

While on the set of a movie, a film crew member alleged that Depp punched him twice in the ribs. According to the lawsuit Depp yelled: "I will give you one hundred thousand dollars to punch me in the face right now!"

The man did not react, according to the lawsuit, at which point Depp was escorted away by bodyguards.

A producer then requested that the man involved sign papers saying he would not sue. When the man refused, he was allegedly fired.

The characterisation of Depp as a hard done by, much maligned, funny, gentle, shy and ever-composed artist is simply not consistent with his reputation in Hollywood.

What we've also seen is how with some music and editing, videos of Depp disrespecting a courtroom, making jokes about past behaviour and mocking a lawyer might look funny. His rebelliousness is being read as endearing by fans who know him best as Captain Jack Sparrow or The Mad Hatter in Alice in Wonderland. But he is neither of those things. He is a man who has sued his ex-wife for $50 million in a defamation suit, because she referred to herself as a survivor of domestic violence.

At the same time, we have viral close up videos of Heard's face, where apparently she smiles for a moment, or winces, or blinks too purposefully, and this is somehow meant to be proof of her guilt.

The analysis of courtroom behaviour has become ridiculous.

At this point we are using Deep to express an ideology, which is that the Me Too movement went too far, and Depp is one of the unfortunate casualties.

Perhaps he is an innocent victim - a statistical anomaly.

Or maybe the truth is a lot more complicated than that.

Let's make sure that in achieving justice for Johnny Depp, whatever that means, we do not forfeit the justice of countless women who have legitimately been assaulted at the hands of their intimate partners. Women are not, on the whole, liars. Intimate partner violence is not a real threat to men's lives in the way it is to women's lives. All we need to do is glance at any statistic, in a country where one woman a week is killed at the hands of family or domestic violence. If Depp was the victim of domestic abuse at the hands of Heard that would make him the exception, not the rule.

There is a great deal the 'Justice for Johnny' story has left out.

Before we pledge our support, we ought to hear the other side.

Johnny Depp may not be the man so many think he is.

A
any1 3 months ago
Reply
Upvote
Finally!! It seemed like I was the only one these past few weeks thinking that the abuse was coming both ways!! It seems like because Johnny Depp is a loveable and attractive character he's getting away with his share of the abuse. The whole relationship sounds so toxic and dangerous.
What Amber has done was wrong but Johnny is far from innocent. Yes women can perpetrate family violence, we all know that, but the big factor in FV that makes it such a serious crime is the power imbalance that women face against men. Men are physically so much stronger than women and typically get set off in an uncontrollable rage far more than women - making them that much more terrifying when they're being violent. For me, that's what makes FV against women so heinous - more so than women perpetrating violence against men.
H
hermione 3 months ago
Reply
Upvote
2 upvotes
Finally, some sense 👏🏼
Resources
Very Peri
Skin
News
General
Opinion
True Crime
Politics
Sport
Explainer
Entertainment
Celebrity
Reality TV
Movies
TV
Books
Rogue
Royal
Lifestyle
Beauty
Fashion
Weddings
Home
Wellness
Health
Fitness
Travel
Food
Family
Before The Bump
Pregnancy
Baby
Kids
Teens
School
Parent Opinion
Work & Money
Money
Finance
Career
Lady Startup