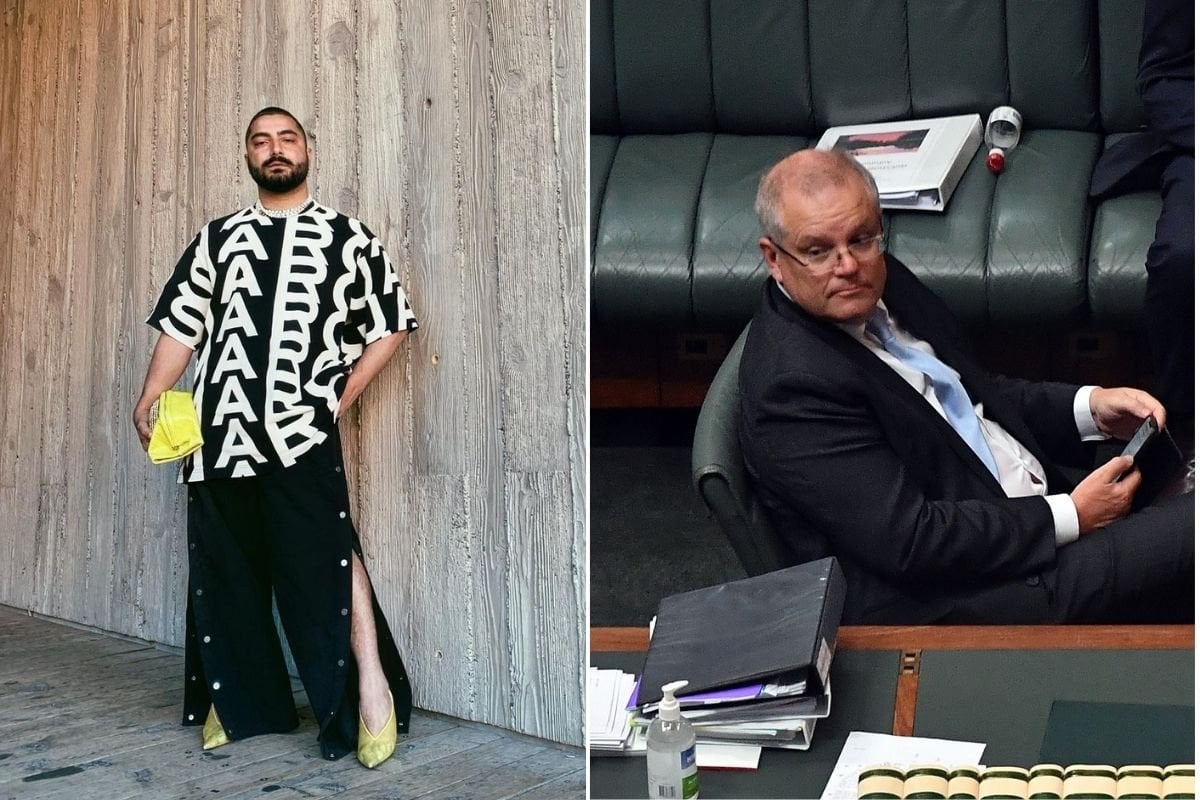 Warning: The following contains mentions of suicide and may be triggering for some readers.

This week, our government made it very clear how they feel about the Trans community; namely, our darling Prime Minister. (That’s sarcasm in my voice in case you’re wondering.)

However let’s backtrack for a moment shall we? Last week, the internet and subsequently, Australia, got into a frenzy over a Christian school in Brisbane asking parents to sign a contract before the start of the school year. The contract, in a nutshell, was a queerphobic, seemingly archaic set of ‘morals and values’ that the school operate by. Any student who exists beyond said morals, was not welcome and could face expulsion. The ‘values’ lumped homosexuality and bisexuality alongside pedophilia and beastiality. It also noted that the school only recognises ‘the two genders’ and will only refer to students by the sex that was assigned to them at birth. Making it very clear that trans kids are not welcome.

Watch: The difference between gay Deni and trans Deni. Post continues after video.

The contract was leaked and thanks to the widespread social media work done by Christian Hull, former queer students and parents of queer students alike, the contracts narrative towards its LGBTQIA+ students was amended and the schools' principal ‘stepped down’. Earlier this week however, another Christian school, this time in Sydney, was revealed to have the same policy.

What this moment sparked was the realisation that only a week later this type of discrimination could be passed as legal, under the religious discrimination bill Scott Morrison promised to make law. A bill that would allow the very open legal discrimination of queer people nationally, all in the name of ‘religious freedom’. This bill in action would allow schools, hospitals and other institutions of this nature, the freedom to discriminate openly against the LGBTQIA+ community.

Wanna be an openly queer kid at a Christian school? Sorry you’re not welcome. Need a kidney transplant at your family’s Catholic hospital? Your treatment could be denied.

Alas, this week, after much social media uproar, news debates and even protests, ScoMo declared that the amended bill would protect gay students in religious schools but before you rejoice - not trans students. Whether or not this bill will in fact come to fruition remains to be seen, however, let me shed some light on how this has made trans Australians feel and more broadly, the Queer community as a whole.

The timing of this feels especially relevant, in that this weekend marks the 40th anniversary since homosexuality was decriminalised in Victoria. As a gay/trans Victorian, imagine my immense heartbreak to witness quite literally, ‘the clock’ be turned back four decades. The plight, the protest and the progress made as a result of the work put in by the elders of my community, long before I was even born. In what ‘fair country’ does its leader wind back the hands of time and usher a community of people back into the dark closets that once stifled them?

Archaic is a word that comes to mind.

I’d ask our PM and the members of parliament to consider these very real statistics that penetrate the Queer community in this country - sadly not the fun kind.

Among BIPOC members of these communities, the stats will increase.

Whether or not this bill sees the light of day is frankly irrelevant. Because in one fell swoop our leader - the person all Australians are supposed to look towards for leadership, told us he doesn't care about the lives of transgender humans. In a speech to parliament he went as far as to say that there was a time and a place to consider the trans community and that time was not now.

You, Scott Morrison, with your archaic mindset, words and actions, deem trans peoples' lives to be of less value to yours, and in this moment you will further perpetuate the aforementioned statistics.

Is that the legacy you wish to leave?

Is that what you want your grandchildren to read about some day? How their grandfather was the leader of this country and encouraged discrimination, publicly, vocally and with pride even. All in the name of ‘God’.

If you need to talk to someone, Australia-wide anonymous and free LGBTI peer support is available via Qlife. Call 1800 184 527 or webchat 3pm-12am AEST.

Reply
Upvote
3 upvotes
Consider this a squeeze hug Deni. I lost my nephew to suicide and my Dad to self neglect, because the same pedophile abused them both as children and they never got past the shame. This predator was considered a pillar of the community until his dying day. The truth only came out when he was already dust in the ground.
So not only am I heartsick to read the suicide statistics you quoted, but I am disgusted to hear that any state funded institution should dare to equate queerness and gender identity which does no harm to anyone, with the repeated manipulation and abuse of children.
You are loved. You are respected. You are accepted as you are. xx
M
mamamia-user-450417826 3 months ago

Reply
Upvote
3 upvotes
My brother is trans and this whole thing is just disgusting. He constantly feels as if he needs to hide his transgender identity out of fear of this! I’m so disturbed by this religious discrimination bill and yet not at all surprised. I went to a strict catholic highschool in brisbane (10 years ago) that did exactly what these 2 schools are doing Hope the bill is never revived - these schools shouldn’t be able to use their faith to discriminate anymore!
News
General
Opinion
True Crime
Politics
Sport
Explainer
Entertainment
Celebrity
Reality TV
Movies
TV
Books
Rogue
Royal
Lifestyle
Beauty
Fashion
Weddings
Home
Wellness
Health
Fitness
Travel
Food
Parents
Before The Bump
Pregnancy
Baby
Kids
Teens
School
Parent Opinion
Work & Money
Money
Finance
Career
Lady Startup
Relationships
Sex
Dating
Separation
Friendship
Family
Real Life
Couples