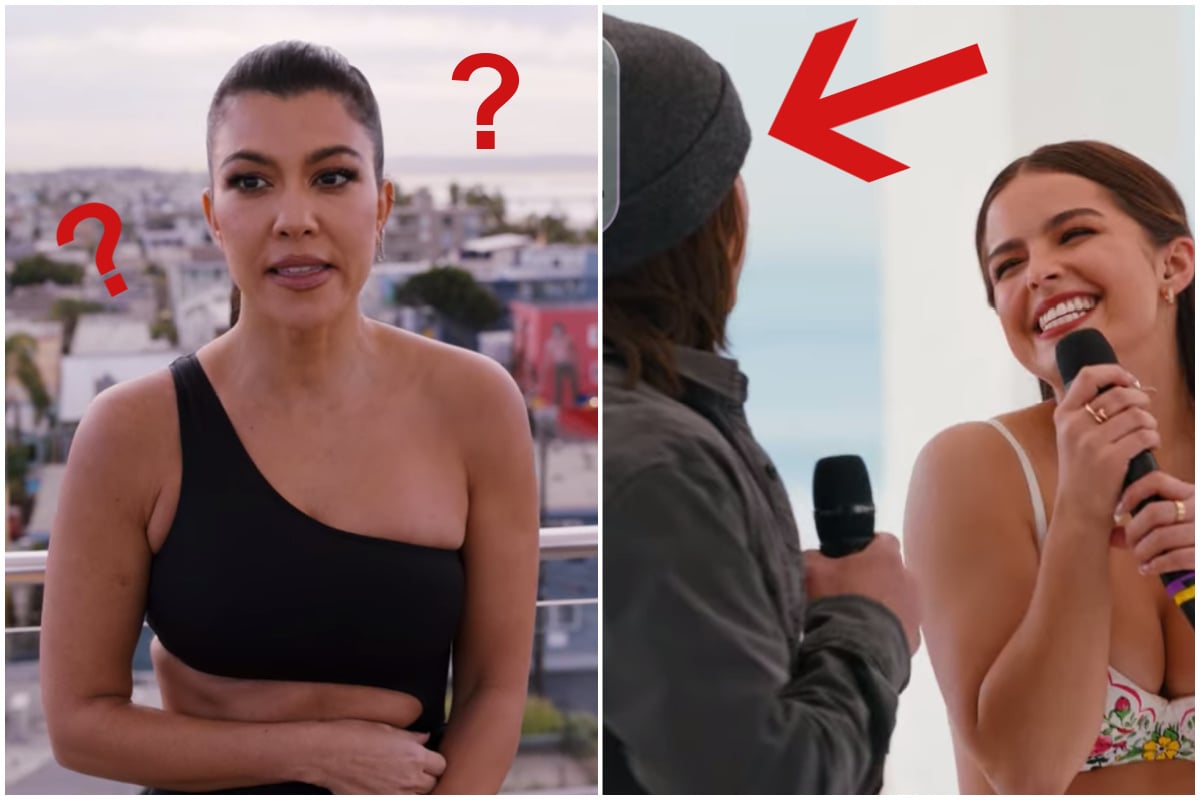 This review (??) contains spoilers for Netflix's He's All That. But they're... entirely unsurprising.

I had heard the rumours.

I knew Addison Rae - the beautiful one who does the dancing on the TikTok - was starring in a movie. I also knew about a dance scene and took it upon myself to start a rumour that she had refused to do the film without it, which for the purposes of my joy and general fulfillment, is absolutely true.

Then over the weekend I saw the trailer and my God.

I need this urgently. Image: Netflix.

I yelled at my partner that he needed to entertain himself for a few hours because I had a date. With a film. That was going to be terrible.

You see, teen rom coms, especially those starring people with no acting credentials, are absurd. Everyone is pretty and nothing is real and the backpacks are tiny. There's always a scene where people sing and dance for no reason.

The person who needs a 'make over' just has a bad haircut and wears glasses and happens to have a weird hobby like 'art' or 'photography', or in Mandy Moore's case, 'singing'.

The arrogance? Of asking someone? Not to fall in love with you?

So I got my M&M's out of the freezer, messaged a family member in URGENT CAPITAL LETTERS to share their Netflix password, and pressed play.

We begin in the bedroom of our main character, Padgett. I'm going to offend someone by saying this, but it's a fkn weird choice of name. 'Padge,' obviously played by Addison Rae, has a pathologically pink bedroom and is an influencer, streaming most of her day to her followers.

Why is 'the internet' always portrayed so appallingly in movies? Take exhibit a: 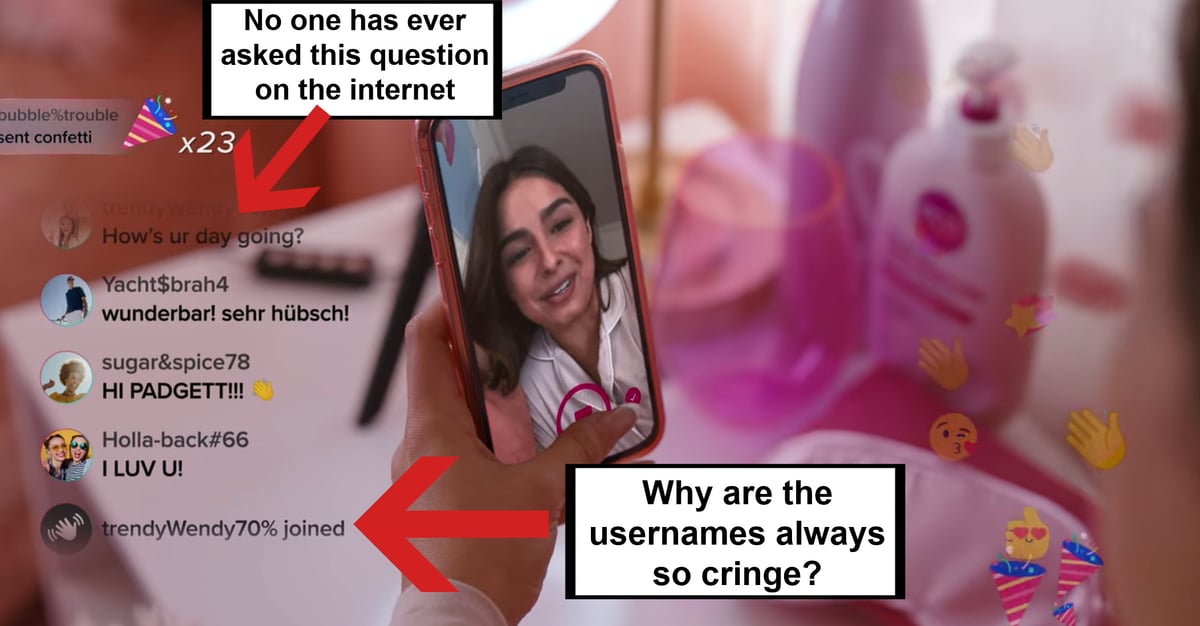 This is an insult to literally every social media platform. Image: Netflix.

And on a related note, exhibit b: 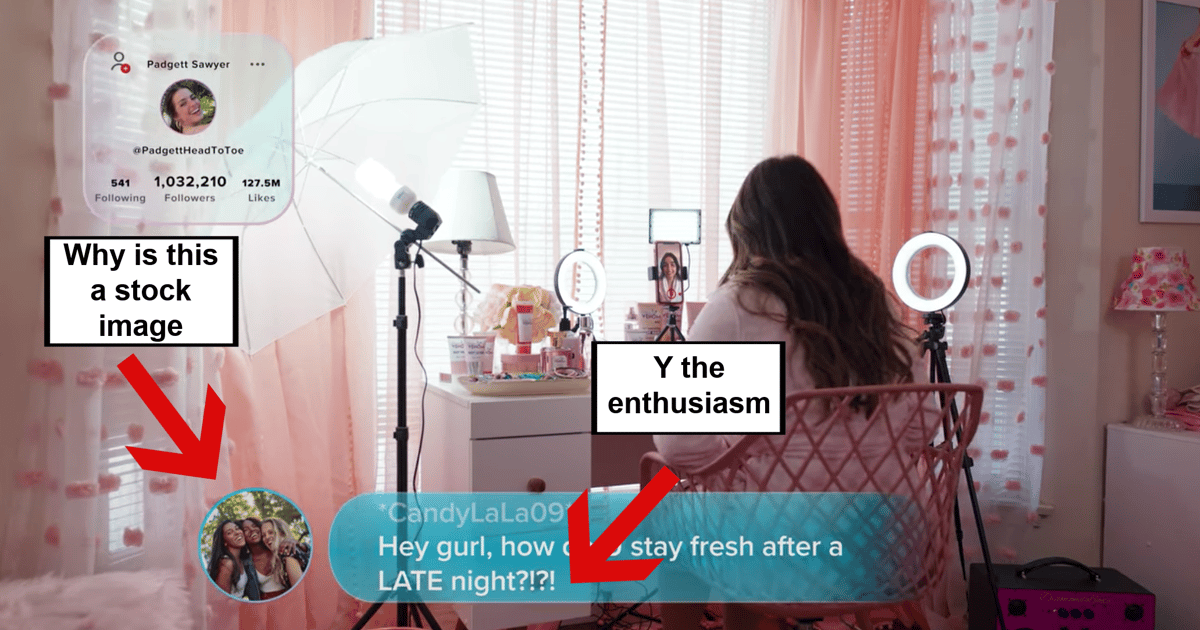 I rest my case. Image: Netflix.

But the twist is that while Padgett's life looks fancy, she actually lives in a completely normal home with her mum, who's a nurse. Her single mum, Anna, is obviously played by Rachael Leigh Cook, better known as Laney in the original She's All That and she must be so sad it's come to this. 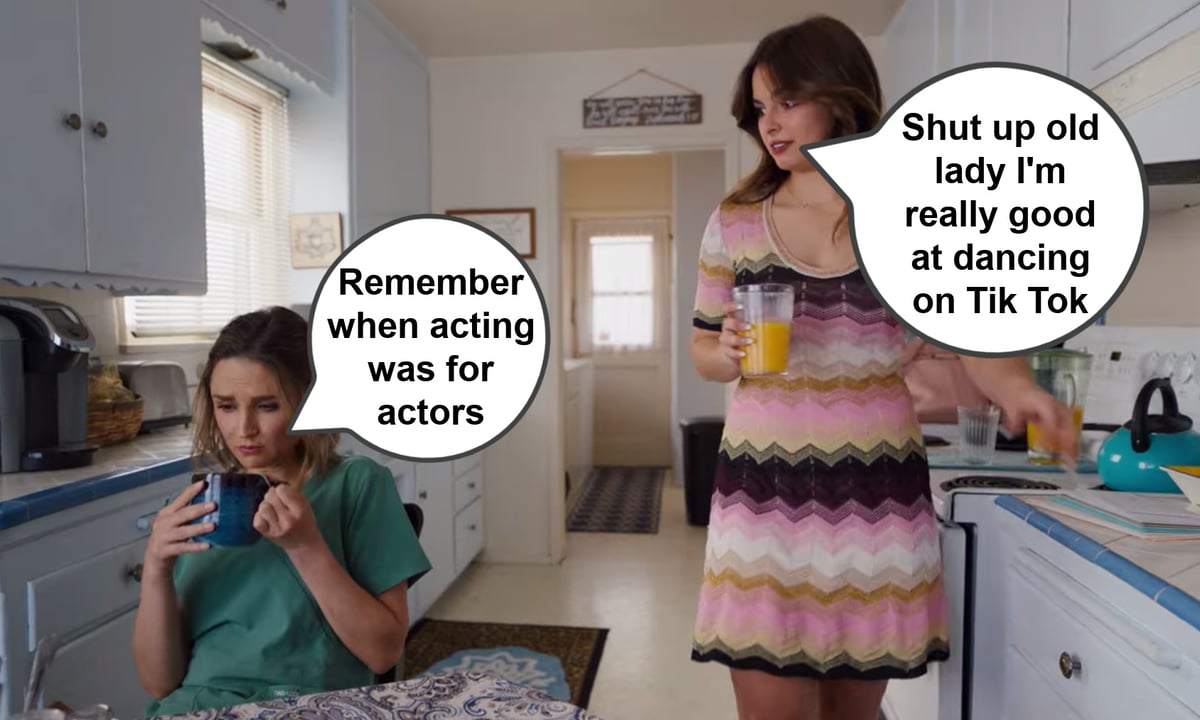 How did this happen. Image: Netflix.

But no one has time to get to know boring Anna, because Padgett has made gluten-free croquembouche for her rapper boyfriend, Jordan. She gets in a ridiculously fancy car with her friends Alden and Quinn and drives to the set of her boyfriend's latest music video.

Of course, she live streams the visit (...why) and walks in on him hooking up with his back up dancer. 'YOU DON'T DESERVE MY CROQUEMBOUCHE, YOU CROQUEMDOUCHE,' she yells and holy s**t how embarrassing. For everyone.

A writer in LA needs to be fired, and they know it.

It turns out the whole thing has been livestreamed and for reasons that are unclear, Padgett loses heaps of followers? It's honestly a huge plot hole. Why would people unfollow? When you went viral? For discovering your boyfriend was cheating on you? Ffs.

To distract from the fact the script no longer makes sense, the filmmakers use a technique as old as time.

They introduce a Kardashian. 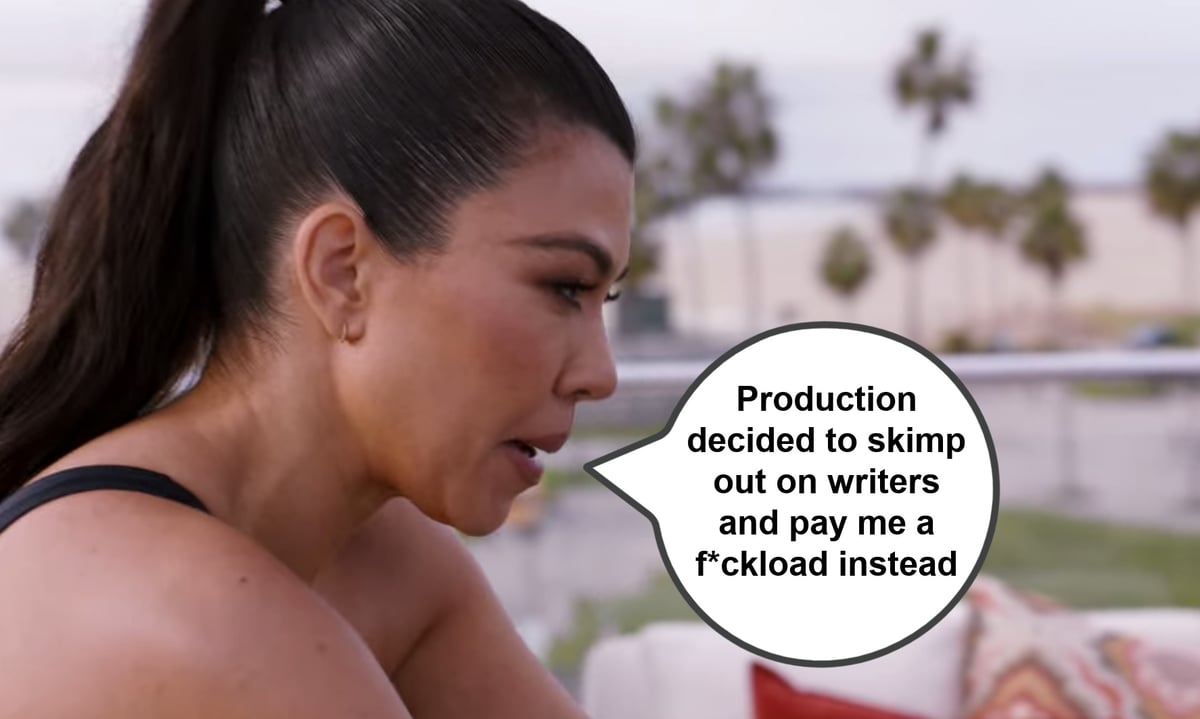 I didn't know I needed Kourtney Kardashian's terrible acting in my life but I really do. Image: Netflix.

Here, we have the best piece of dialogue to ever be written. Ahem:

Padgett: Okay, so you saw the video, and while it was unfortunate...

Jessica (??) AKA Kourtney Kardashian: Unfortunate? My ex-husband's hiking accident was unfortunate, and he was mauled by bears.

I'm 90 per cent sure Kourtney is reading every single one of the six lines she has in this movie and honestly respect. 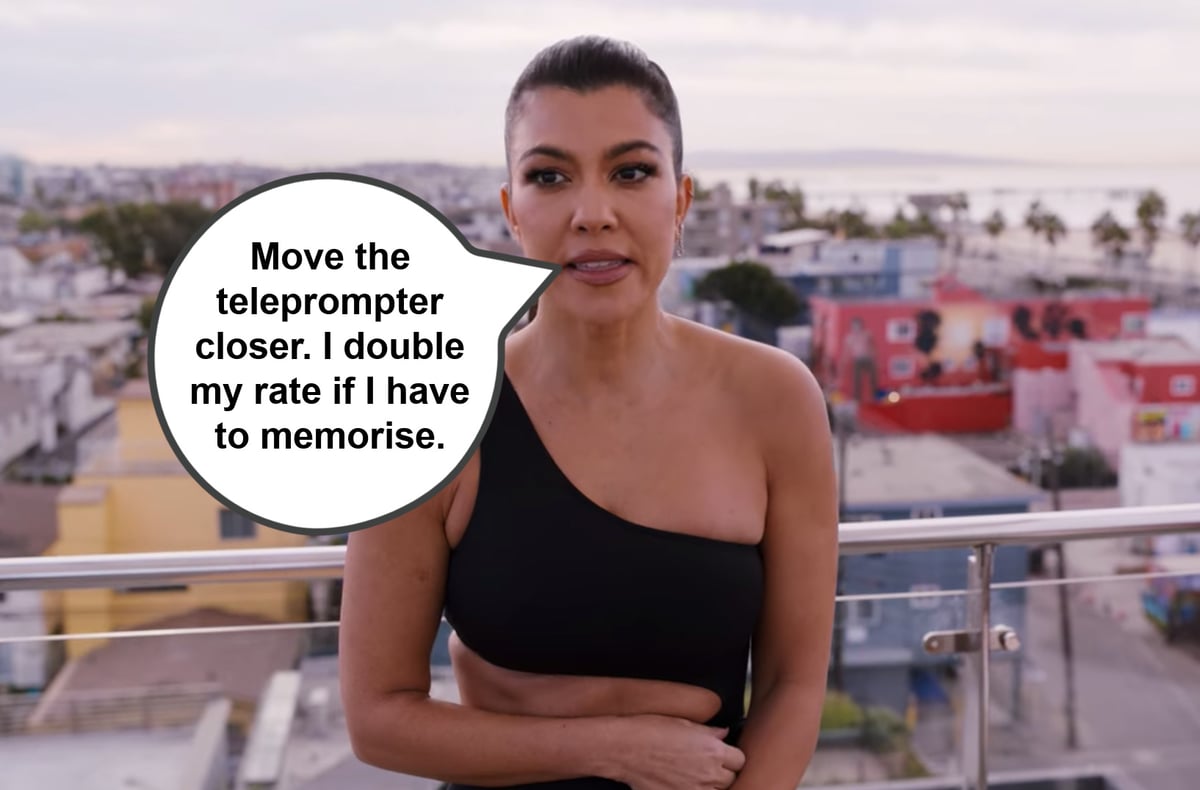 Cameron is objectively completely attractive he just wears a beanie and has a camera? 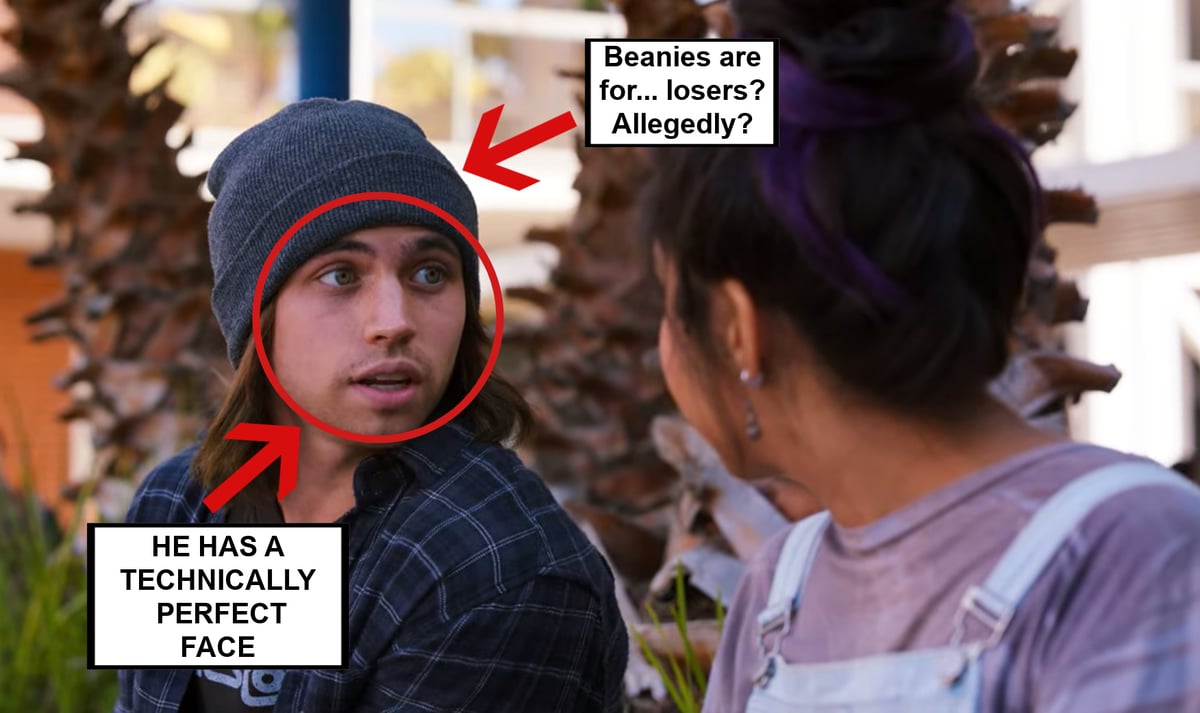 They didn't even bother with glasses. Image: Netflix.

For some reason - that apparently has something to do with gaining back her followers - Padgett's friend Alden places a bet with her about making Cameron prom king.

The next hour consists of:

- Padgett ambushing Cameron's little sister Brin for information about him, which she doesn't seem to find... odd. Also. What's. With. The. Names.

- No chemistry and/or bond between Cameron and Padgett whatsoever, apart from a moment where Padgett falls in literal horse s**t and then throws it at Cameron? 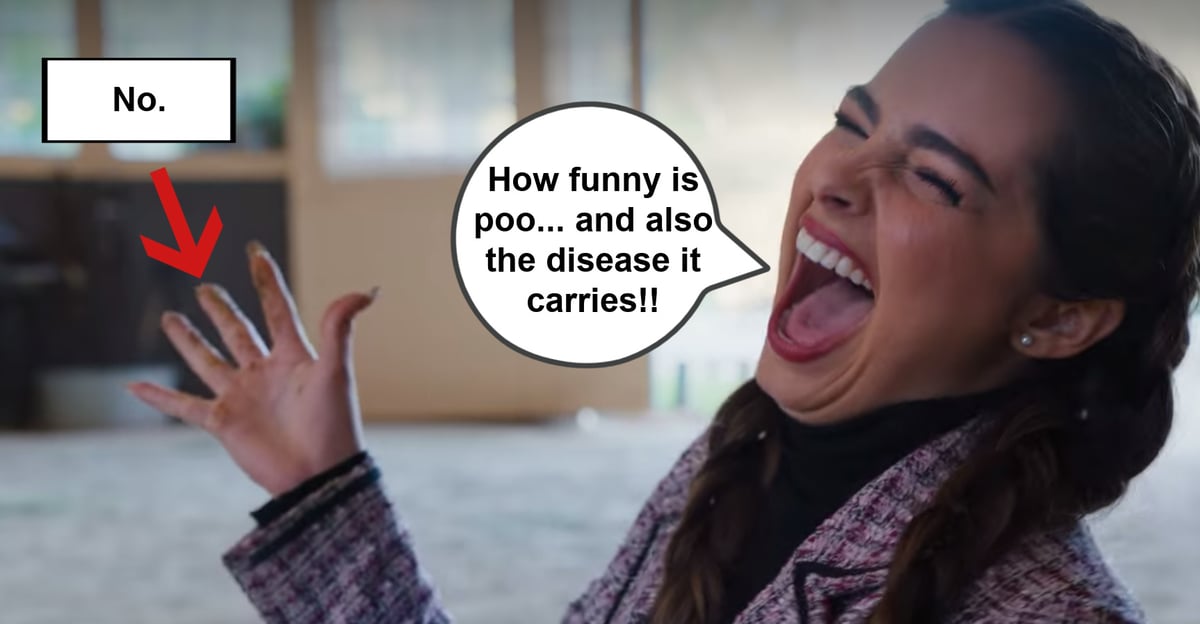 - A brilliant duet of Katy Perry's Teenage Dream about which I will not hear a bad word. 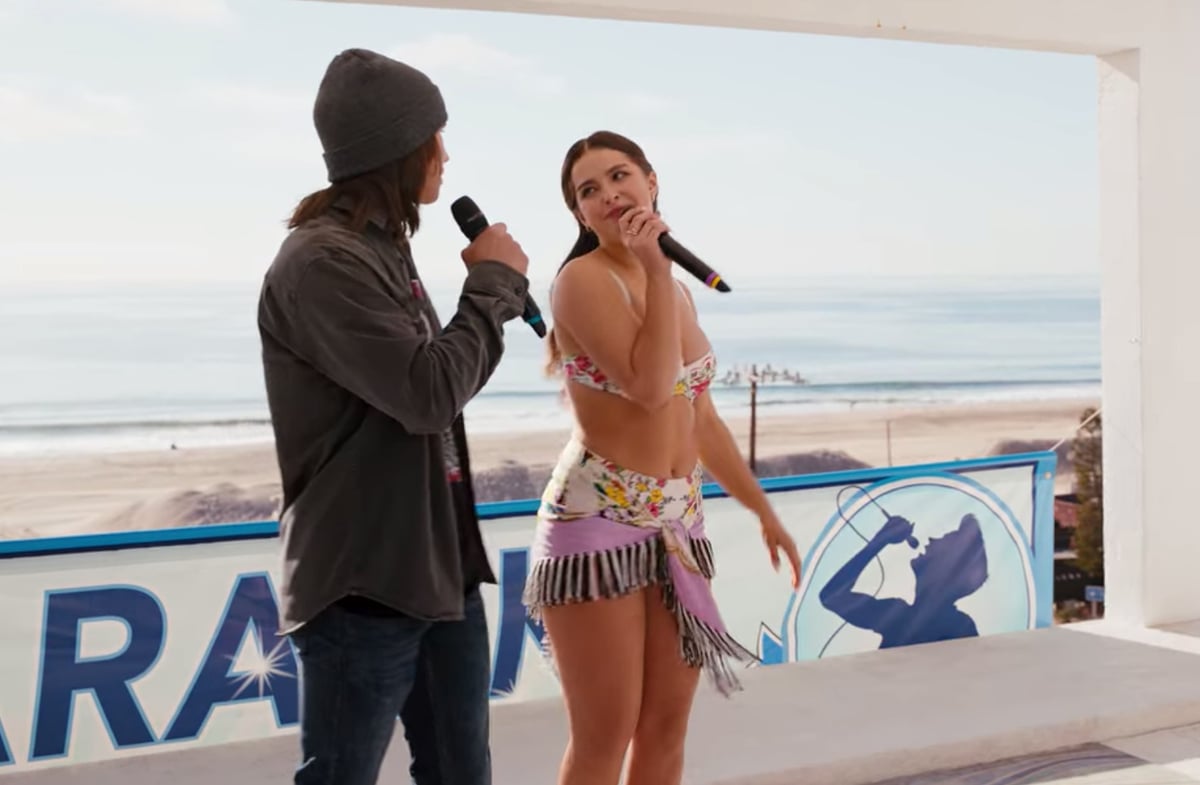 As a standalone piece of art this scene is perfection. Image: Netflix.

Yes there's a weird editing moment people have identified on TikTok where Addison Rae's hand disappears. Yes no one's singing is particularly impressive. But it's joy. And they're singing at a pool party. And I want to be at a pool party.

- Cameron taking Padgett to the train station (OMG HOW AUTHENTIC) to show her how he takes photos of strangers without their permission. 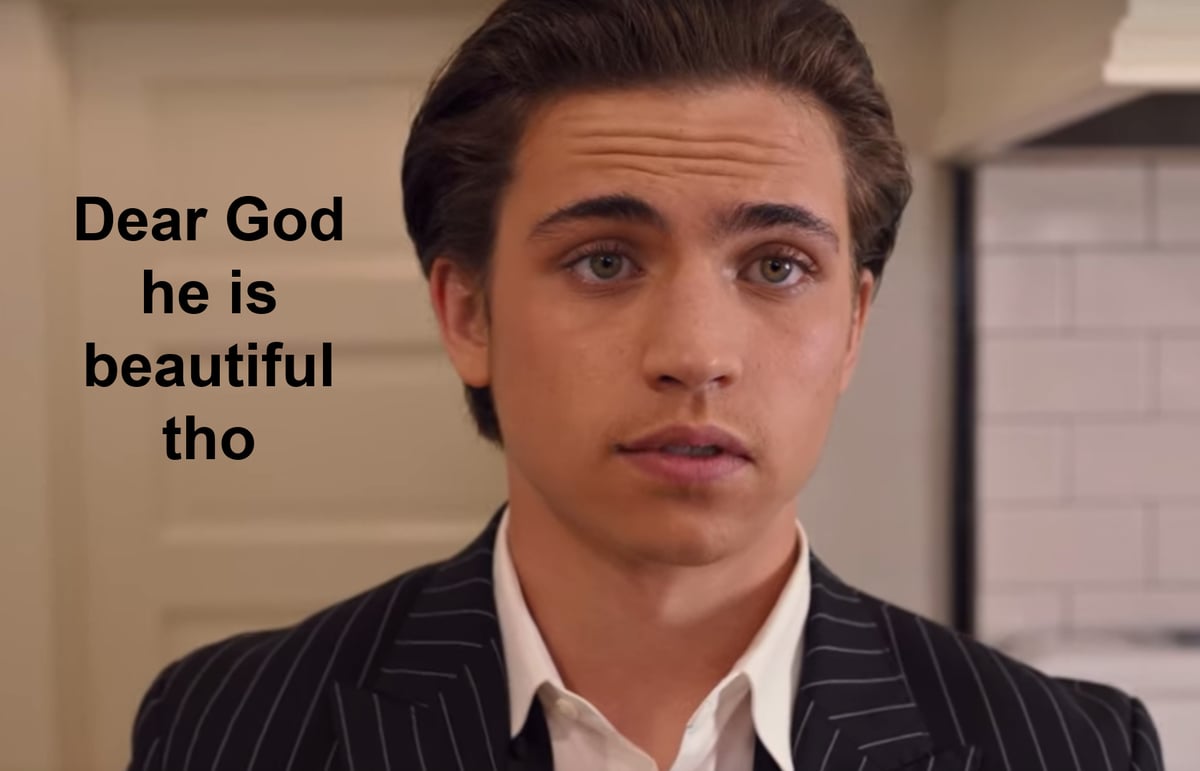 - A 1920s-themed party where Cameron punches Jordan for sexually assaulting his sister? Wtf?

Watch the trailer for He's All That. Post continues after video.

- And, of course, Cameron asking Padgett to prom but then her friend Alden (who is a psychopath, turns out), telling him about the 'bet'.

It's as though the writers of He's All That were given a list of things Gen Z like, and asked to make a movie out of them. And those things were definitely:

As a side note, why does every character in every teen movie have a dead parent? At one point, Cameron tells Padgett his mother tragically died in a PLANE CRASH and can I just EXPLAIN that the likelihood of being killed in a plane crash for the average American is ONE IN ELEVEN MILLION.

This man is either a liar or incredibly unlucky. 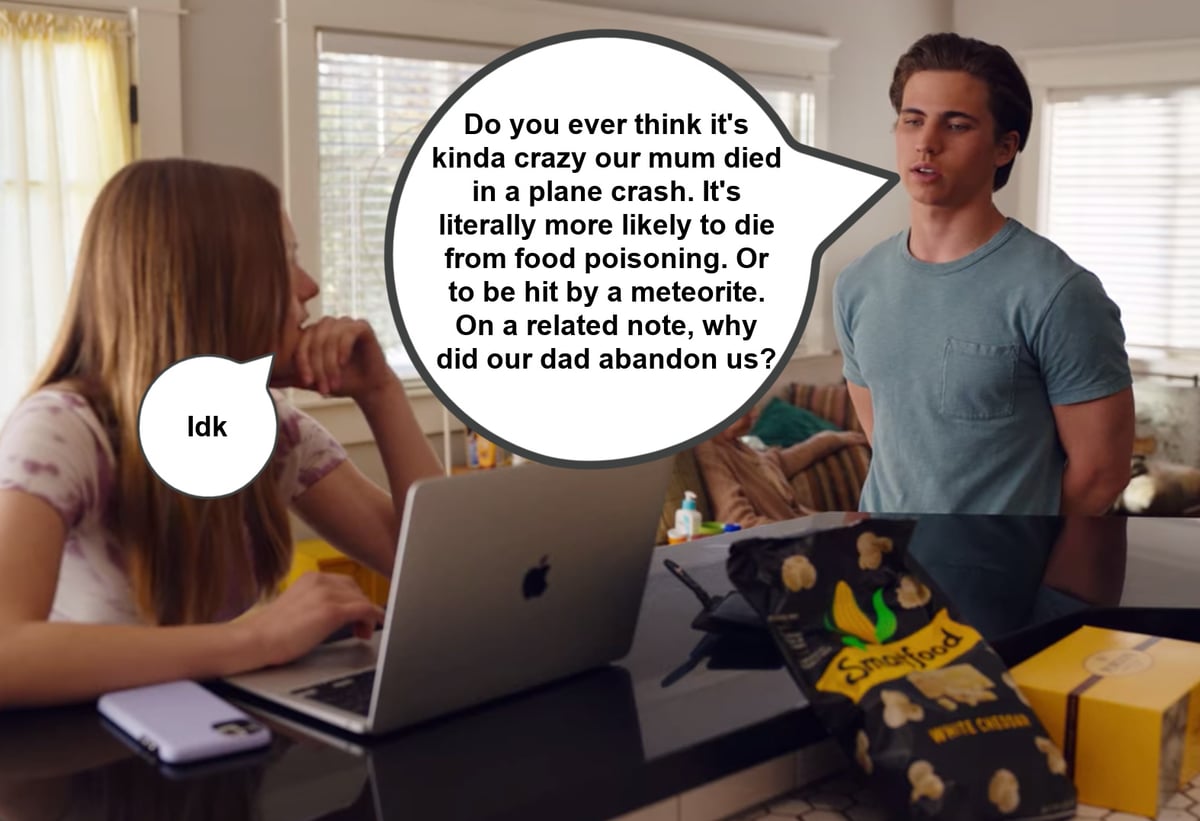 Obviously, Padgett then has to get ready for the prom alone because Cameron has decided not to go, given he was lied to, publicly humiliated, needs to mourn his parents, etc.

But everyone shut up because it's time for the dance off.

And guys... it's not... good enough. Given Addison Rae is like a professional dancer? It's weird and there's no winner and it's unclear why anyone is dancing at all.

It's so terrible I need you to understand.

I have so many better ideas? Like why not involve Charli D'Amelio as the opponent? Why not include a really well-known TikTok song? Why am I not a bad Hollywood movie writer?

Eventually, Jordan is announced as prom king and in the biggest surprise of 2021 Padgett wins prom queen, and makes a speech. That is appalling.

She tells the whole school that she's actually poor and her mum is just a stupid nurse (dude... she's right there), and shares a completely unprofound quote from Cameron about people in high school 'pretending' or somes**t. 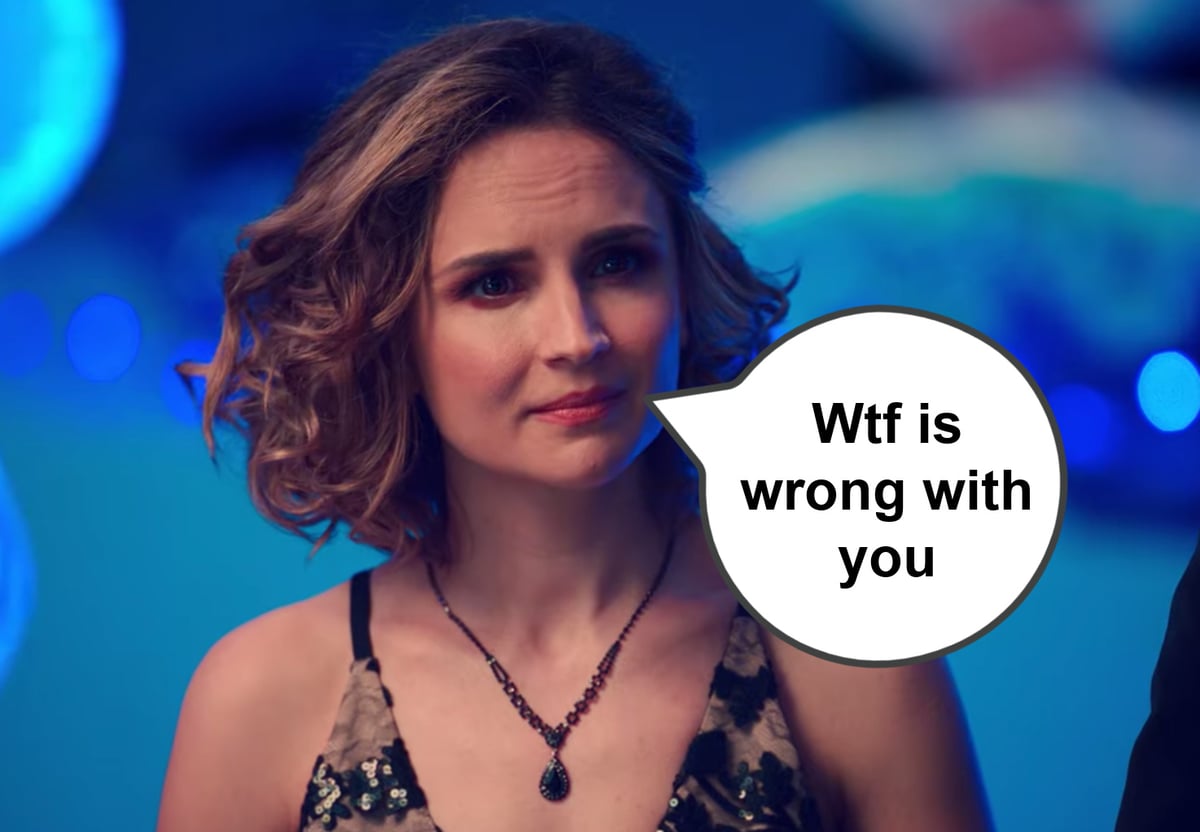 Sorry for being a nurse and earning an honest living? Image: Netflix.

Padgett gives her crown back and it goes to the runner up - a quirky girl, with no explanation of how and/or why she came in second place.

Luckily, Cameron is waiting outside with a horse (???) he managed to transport (??) from the stables (??) for no reason, and he kisses Padgett.

We end on a remix of Kiss Me THAT WAS FEATURED IN THE ORIGINAL SHE'S ALL THAT, and a bizarre scene of the school's principal (played by Matthew Lillard... who again... was in the original) dancing on stage. 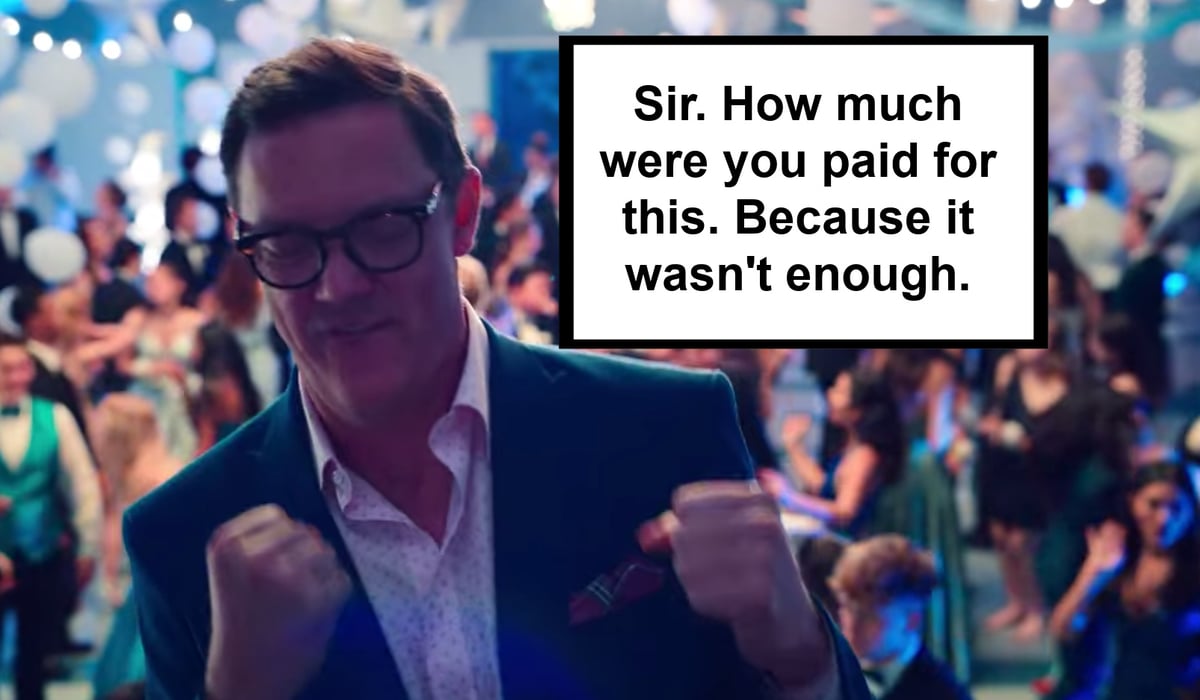 It hurts. To watch. Image: Netflix.

It's cringey and embarrassing and it makes no sense and someone needs to urgently return the horse but I think I loved every moment.

It was exactly what I needed in that I didn't need to think (critical thought created problems), and Addison Rae sung Teenage Dream. That's it. That's all I've ever wanted.

But I will never, ever watch this movie again. Watching once was too many times.

For more from Clare Stephens, you can follow her on Instagram where she recaps terrible TV in real time.