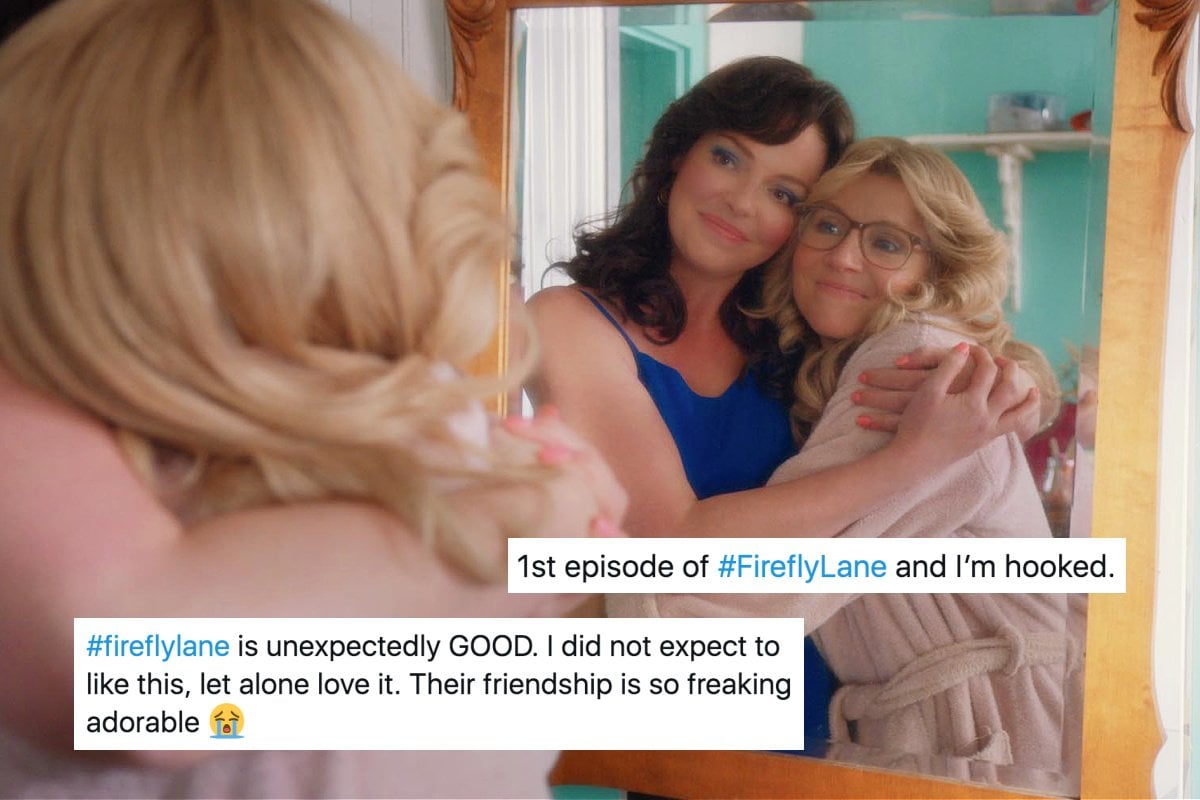 While the summer holidays might be over, binge-watching TV is not. And now that we're all done with Bridgerton, we need something new to devour.

Netflix's latest TV show, Firefly Lane, is a heartfelt coming-of-age drama, based on the bestselling book of the same name by Kristin Hannah. The series follows the 30-year friendship between Tully Hart (Katherine Heigl) and Kate Mularkey (Sarah Chalke), two childhood friends who met when they became neighbours on Firefly Lane.

The 10 episodes span across their childhood, college years, first jobs, marriages, and motherhood. And while many things change in both women's lives, their friendship remains a constant.

Watch the trailer for Netflix's Firefly Lane below. Post continues after video.

While the series dropped just days ago, plenty of people already have some serious attachment to the show and more importantly, these two best friends.

Here are 25 of the best reactions to Netflix's newest bingeworthy show, Firefly Lane.

i've binged 3 episodes of #FireflyLane on netflix today aaaaand i love it so much pic.twitter.com/viFiMvQ1AE

i love this show and this friendship and now i need a season 2 now!!! one of my fav shows on netflix #FireflyLane pic.twitter.com/chgNP8BEHa

Me: I watch #FireflyLane for the plot

#FireflyLane on Netflix is sooooo good! Started last night & I am on episode 5. Tell your besties to watch. I did. 😂

I’ve seen a couple #FireflyLane astrology posts and not that anyone asked but I always had Kate pegged as a Cancer sun, Virgo rising, Aqua moon 🤷🏼‍♀️

1st episode of #FireflyLane and I’m hooked. Loving the music in it too pic.twitter.com/VwuHbwLHii

When you realize today is February 3 and Firefly Lane is now on @netflix ! ♥️♥️♥️ @sarahchalke #FireflyLane pic.twitter.com/lRcyA8JKbC

#fireflylane is unexpectedly GOOD. I did not expect to like this, let alone love it. Their friendship is so freaking adorable 😭

So in love for Tully Hart 😍 What an incredible and intense character. #FireflyLane pic.twitter.com/C3lN48tTXv

I’m only halfway through the series and i very much recommend this to anyone!! i love the characters and their friendship!! its so precious! 🥺🤍

“The music might have changed with the decades, but the promises made on Firefly Lane remained. Best friends forever.” #FireflyLane pic.twitter.com/aRwSb7uUvd

#FireflyLane is basically a Katherine Heigl romcom in a series and I’m here for it.

did you also cry in every episode of #FireflyLane or are you normal?

If you haven’t started #FireflyLane yet, get to watching!! It is on @netflix and it is such a good show! @KatieHeigl and @sarahchalke are so great and relatable!

can we talk about katherine heigl’s character’s obsession with blue eyeshadow? coz i’m so about it. #FireflyLane pic.twitter.com/LKnpJ4s3Ad

So here I am ... watching #FireflyLane

And I’m not stopping ... pic.twitter.com/PwnQ1UP7o7

Just finished #FireflyLane omg I can't believe this. I'm so happy to see @KatieHeigl is back on screen again. She's like the mother of all bed snuggling romantic movies of all time. Welcome back mother!! #netflix

okay, but, here me out... #FireflyLane is definitely the best @netflix show released this year.

You can stream all 10 episodes of Firefly Lane on Netflix now.