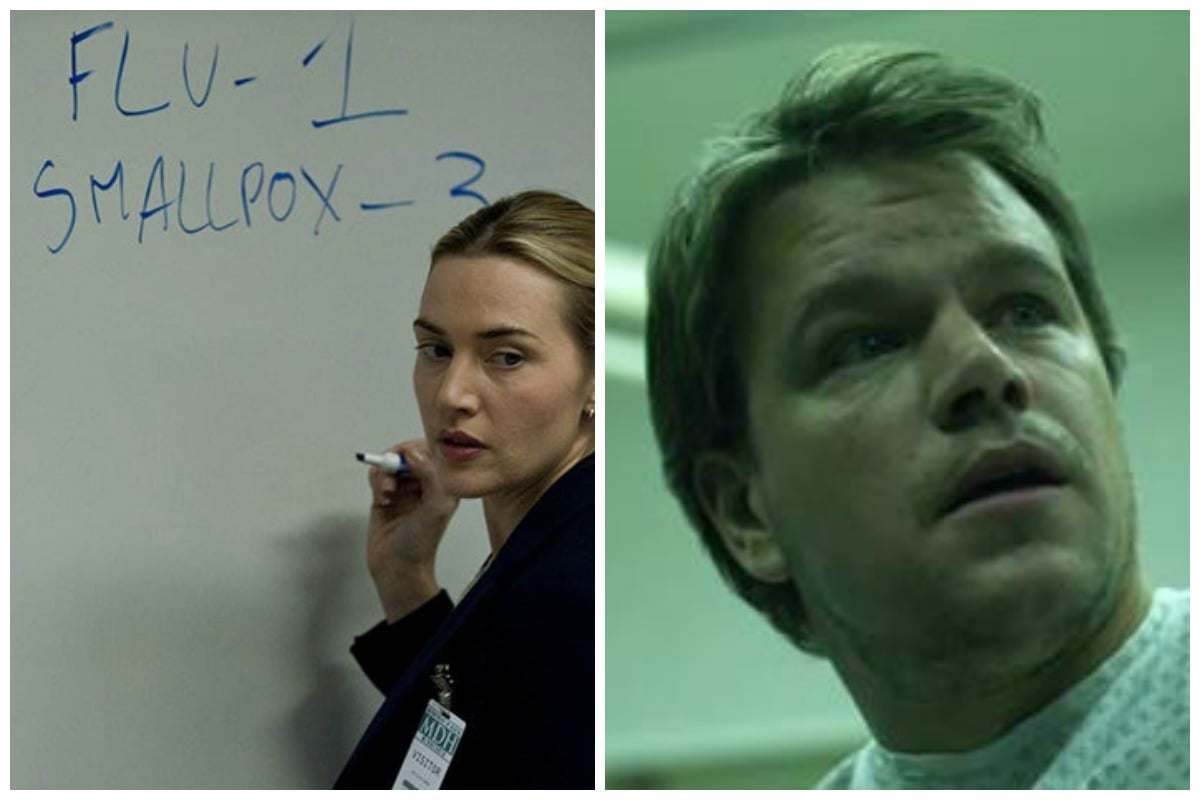 When details of the novel coronavirus started to enter the mainstream earlier this year, there was a familiar comment in conversations all over the world:

It is kinda like the 2011 movie Contagion, starring Matt Damon, Kate Winslet and Marion Cotillard.

Watch the trailer for Contagion. Post continues after video.

As the news around COVID-19 has intensified globally in recent weeks, Contagion has become one of the most-watched films online. According to Warner Bros, it’s their second most in-demand film, behind the Harry Potter franchise – a far cry from its ranking as their 270th most popular film in December 2019.

It would appear audiences are turning to the film for a few reasons: to enter a fictional world where circumstances are worse than our own, to absorb information about what a pandemic means through entertainment, and to spot parallels between the movie’s virus and COVID-19.

When I go out imma wear a makeshift hazard suit like Jude Law did in Contagion pic.twitter.com/1qzVk6okcb

Man I just watched that movie Contagion… How was that made 9yrs ago but it’s the same shit that’s happening right now in real life? ????

Contagion becomes one of most-watched films online in wake of coronavirus pandemic. I watched it this weekend and it was a perfect predictor of what happened so far. If we follow the rest of the predictions, this will last a lot longer than anyone thinks https://t.co/ONLuYItY6V

Just watched Contagion. Please tell me how any movie can be this prophetic, down to every single detail. Absolutely spooky

So many of you haven’t seen Contagion yet and it SHOWS #SocialDistancingNow pic.twitter.com/3ucquldMTz

Watching Contagion (again). The portrayal on how a novel virus starts, spreads, mutates and cured is accurate af. Sadly, it also realistically portrays what we’re experiencing now, the loss of social order, the risks that medical frontliners face, the spread of illegitimate news. pic.twitter.com/QQ0rB9ojCE

Contagion begins with Gwyneth Paltrow’s character, Beth Emhoff, flying home to the United States after a business trip in Hong Kong. Two days after returning home, having developed flu-like symptoms, she collapses and is taken to hospital, where she dies of unknown causes.

Grieving his wife’s death, Mitch Emhoff (Matt Damon) then suddenly loses his young stepson to a similar illness. The film follows the spread of the virus (called MEV-1), the response of public health officials, the social impacts of a pandemic and the development of a vaccine.

During filming, director Steven Soderbergh said a pandemic like the fictional MEV-1 was a matter of “not if, but when”. He consulted with medical experts like Dr Larry Brilliant, an epidemiologist who was involved in the successful eradication of smallpox, as well as Dr Ian Lipkin, a Columbia University epidemiology professor.

Speaking to the LA Times earlier this month, Dr Lipkin said the movie was “not going to be pure entertainment – it was actually going to have some public health messaging.

“The idea was to make people aware of the fact that emerging diseases will continue to emerge and reemerge.”

Simply, Soderbergh knew that in 2011, audiences didn’t know what a global pandemic would look like in the modern world. So he showed them.

Here’s what Contagion accurately predicted about the pandemic that would emerge nine years later.

How the virus spreads

In Contagion, MEV-1 is spread through ‘fomites’ – objects like clothes and metal surfaces that can transfer disease to a new host. The film shows exactly how surfaces like phones and metal railings touched by infected individuals can spread the disease, and how the initial transmission occurred via a handshake. The virus in the movie isn’t airborne.

This appears to be the case for COVID-19.

“It spreads mainly by droplets, so particularly when people cough or sneeze, droplets of mucus containing virus particles drop about one metre in front of that person,” he explained.

As of this week, the coronavirus is currently not considered to be an airborne virus, like chickenpox or measles.

“It’s a virus that travels in droplets. This is very good news. With an airborne virus, one person could infect the whole room,” Luis Ostrosky, a professor and vice-chairman of internal medicine at McGovern Medical School in Houston, Texas said.

An epicentre in Asia

The virus starts in Hong Kong in Contagion, and is then spread globally via human-to-human transmission. Marion Cotillard’s character – WHO epidemiologist Dr Leonora Orantes – worries that the Hong Kong epicentre means the spread of the virus will be rapid, given that Hong Kong is a harbour.

According to Al Jazeera, the novel coronavirus was first identified in Wuhan, Hubei Province, China. The source is believed to be a ‘wet market’ which sold dead and live animals. These markets pose a risk of viruses jumping from animals to humans, because they’re often densely packed, and hygiene standards are hard to maintain.

At the very end of Contagion, we’re shown how MEV-1 began: a bulldozer cuts down a number of trees, disturbing a group of bats. One of those bats drops a piece of banana in a pigsty, which is then eaten by one of the pigs. That pig is slaughtered and is being prepared in a casino kitchen by a chef, who then shakes hands with Beth Emhoff, unknowingly transferring the virus.

The researchers in the film describe the virus as having bat and pig sequences.

According to Australia's Department of Health, COVID-19 is closely related to a bat coronavirus.

Bats, however, were not sold at the Wuhan market where the virus appears to have originated. Speaking about how the virus began, Dr Jeff Kwong, an epidemiologist and scientist with ICES and Public Health Ontario, told Global News, "In this instance, we think that bats infected an intermediary host that served as the immediate source for the human infection.

"However, we do not know if this is the case or, rather, if an unidentified bat coronavirus nearly identical to the human strain jumped directly to humans."

While there are some stark similarities between Contagion and the current COVID-19 pandemic, there are also a number of details in the film that are far more terrifying than what we're currently experiencing.

For example, in Contagion, MEV-1 is extremely deadly. The novel coronavirus, however, does not have a high mortality rate. Recent data from Wuhan calculates the fatality rate in people who have symptoms of the disease to be 1.4 per cent. The fatality rate is particularly low in younger individuals and is higher (but still only 2.7 per cent) in people over the age of 64.

While Contagion begins with the death of a mother, presumably in her 30s, and her young son, the risk of serious illness in young people from COVID-19 is so low, scientists estimate a fatality rate close to zero.

The virus also appears to spread far more quickly in Contagion than it is currently, and in the film they refer to an increasing "R0" (pronounced R-naught), or reproductive rate - the average number of people infected by one sick person.

Finally, it's a Hollywood movie. Which means Matt Damon is immune for reasons that aren't entirely explained, society descends into chaos very quickly, and the set starts looking like a zombie movie towards the end.

That won't happen, because real life is far more nuanced. And luckily, COVID-19 is far less dangerous than the fictional MEV-1.

You do get that epidemics and pandemics don't all behave in the same way, yes? Contagion was about a hypothetical pandemic - it wasn't trying to predict ALL pandemics to come.