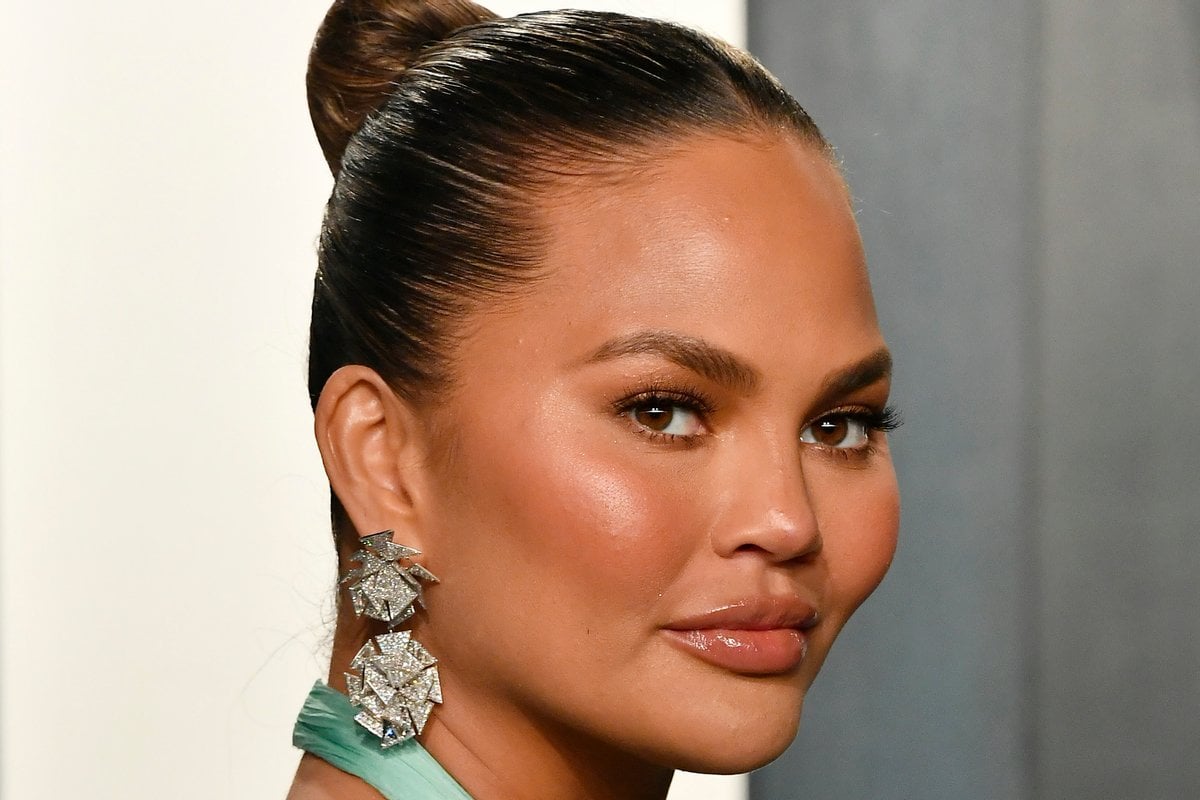 There's a tone to the most recent commentary about the Downfall Of Chrissy Teigen.

I call it, simply, glee.

Glee that the woman who flew too close to the sun got burned. Glee that one of the architects of cancel culture found herself cancelled. And glee that a woman lauded as woke and progressive has been unmasked.

She's not a Good Person after all, the critics would have us believe. She's the worst thing anyone could be.

In 2014, The Cut branded the former swimsuit model, television personality and author of a few cookbooks "The Queen of the 'Cool Girls'".

She was (and continues to be) hot. Funny. Relatable. A lover of fast food and using the f-word.

Watch: Here's what Courtney Stodden had to say about Chrissy Teigen. Post continues below.

She branded herself a feminist and donated money to the sexual healthcare organisation Planned Parenthood. She advocated for stricter gun-control laws and has been a vocal supporter of immigrants' rights. She criticised the policies of former US President Donald Trump and Senator Sarah Palin.

She also told Palin to "shoot herself in the face".

Her followers were unbothered. Most of them didn't like Palin either. The rules of the internet state you're allowed to suggest someone shoot themselves in the face, as long as I personally agree your target is a morally repugnant person. They applauded when Teigen called Trump a "pussy ass bitch", and before long, the phrase started trending all over the world.

Teigen was a master of the internet who melded herself to best fit with the medium. And Twitter demanded she say the most she could in 120 characters or less.

Some think the complication in Teigen's story began when old tweets started resurfacing.

I don't. I think it began in March when she decided to step off Twitter for a while.

Teigen said she had been the target of abuse and ongoing harassment, both on and off the platform.

"I encourage you to know and never forget that your words matter," she wrote. "No matter what you see, what that person portrays, or your intention. For years, I have taken so many small, 2-follower count punches that at this point, I am honestly deeply bruised."

Somewhere, reality TV star Courtney Stodden read that tweet and remembered the time Teigen tweeted them saying "I hate you". And made fun of their appearance. And messaged them privately, suggesting they kill themselves.

It was the hypocrisy that drove Stodden to release the private messages she received from Teigen at just 16 years old.

Like a 2011 tweet where Teigen joked that Lindsay Lohan must add "a few more slits to her wrists when she sees Emma Stone."

And another where she called Teen Mom star Farrah Abraham a "whore" before adding "everyone hates you".

And another where she said, "if u told me I could have 1 kid, but it would be exactly like avril [Lavigne] I would choose to have a barren, sterile existence that ends when I die."

And another where she called child actress Quvenzhané Wallis "cocky" and a "brat".

If, say, Trump had said any of these things, we wouldn't pay any attention.

It's very interesting, however, when someone who has recently taken time off Twitter to look after their mental health, told someone a few years back to kill themselves.

It becomes a story about a hypocrite.

If you proclaim to be a good person, you better believe the mob will use that as a stick to beat you with.

The glee with which the world has watched Teigen's steep fall is in part schadenfreude.

But a larger part, I think, is to do with Teigen representing the parts of ourselves we most hate.

Is there anything we detest more than our own hypocrisy? Then the fact our beliefs and our behaviours aren't always consistent, and maybe if we looked a little closer, we're not as virtuous as we'd like to think?

She represents the part of us that watches a documentary about factory farming, and gasps in horror, before ordering a burger for lunch the next day.

She represents the part of us that shouts we shouldn't need a special day to acknowledge systematic inequality, it should be something we talk about every day of the year, but then we forget about the issue for months at a time.

She represents the part of us that declares ourselves a feminist and then decides that a woman's voice is a little bit annoying. Or she's too outspoken. Or too beautiful. Or too successful.

Teigen is a mirror that makes us feel ugly.

And we want her to learn her lesson. That way, maybe we'll somehow learn ours.

Reply
Upvote
Maybe it's the cognitive dissonance talking but I still think Chrissey has done good for gender equity. And because she's already been cancelled I feel like natural justice has been served.I don't have any animosity towards her. I doubt she will be a mean girl anymore. If she is  allowed back.
M
mamamia-user-482898552 a year ago

Reply
Upvote
@beachhouse84 What exactly has she done for "gender equity"?
T
trviet a year ago

Reply
Upvote
1 upvotes
i don’t get my news from fb
i don’t get my style advice from a 20yro insta star
i don’t get my ethical points of view from the current twitter leader
i don’t listen to podcasts to hear a replay of conversations i have irl
therefore, when a ‘big dog’ on any of the social media platforms goes down/is cancelled… i’m not disappointed, surprised or left questioning why …
because i’m seeking my news, style, ethics/morals from within my life experience … the platforms are for entertainment … and i listen to podcasts to hear what others are experiencing… people may do better by not placing such huge currency in people we really don’t know …
chrissy is no longer the saviour… sigh … move on … i’m sure she will and have a happy fulfilled life … probably divorced but she’ll be fine … so long as she stays off twitter for a bit … she’s not evolved enough to handle ‘it’ (oh and i’m not either, i’m staying away from that shit) …  t x x x
News
General
Opinion
True Crime
Politics
Sport
Explainer
Entertainment
Celebrity
Reality TV
Movies
TV
Books
Rogue
Royal
Lifestyle
Beauty
Fashion
Weddings
Home
Wellness
Health
Fitness
Travel
Food
Parents
Before The Bump
Pregnancy
Baby
Kids
Teens
School
Parent Opinion
Work & Money
Money
Finance
Career
Lady Startup
Relationships
Sex
Dating
Separation
Friendship
Family
Real Life
Couples