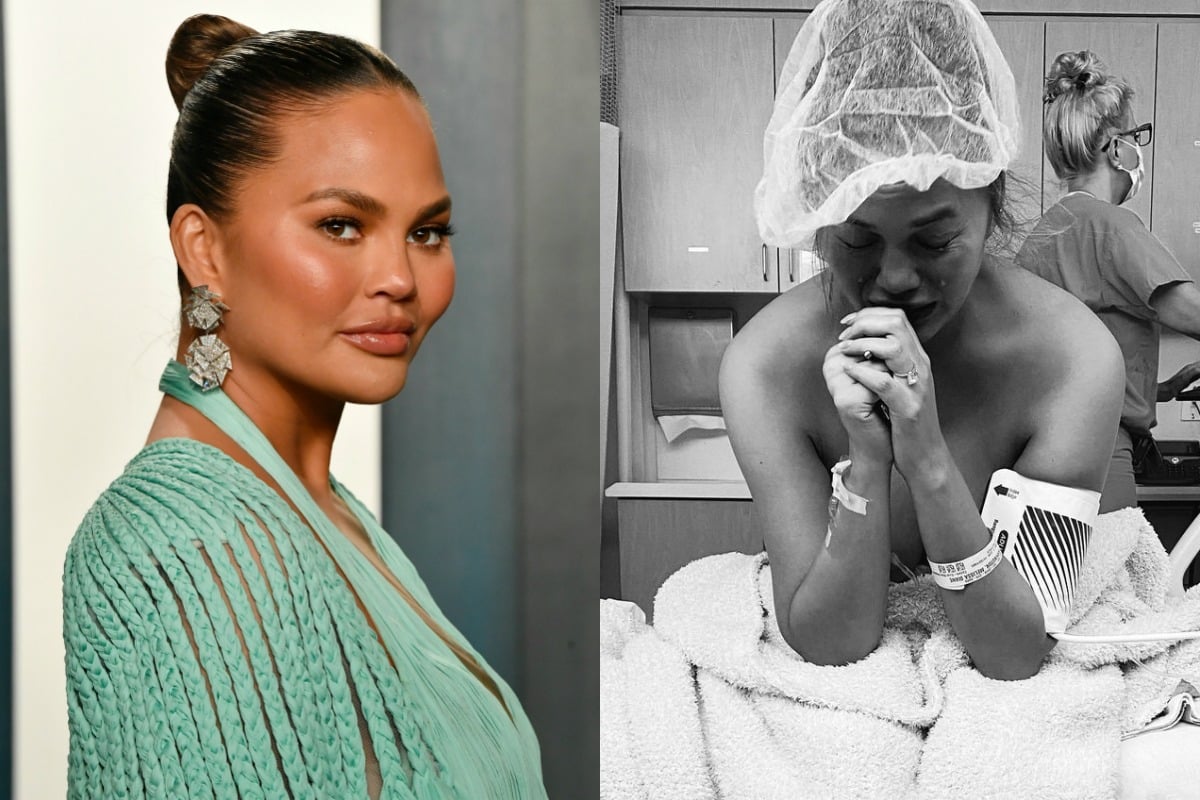 It’s her signature look: at home, hair tossed up in a bun, wearing a robe loosely tied at the waist, showing a bit of boob.

She looks amazing, but if you look deeper, her pictorial choices mean something more.

Any photo of the 35-year-old dressed like this and posted to her Insta is a metaphor for what she represents: a mother, honest and raw.

It makes her relatable as much as an immaculately curated, Kardashian-esque feed, doesn’t.

Chrissy uses no filters. Usually wears no make-up. Is not afraid of showing an unmade bed, or a kitchen bench scattered with stuff.

But what really sets Chrissy apart from other people with millions of followers is she isn’t real just visually; she also isn’t shy of speaking up. She’s always been a truth-sayer about politics, and her marriage to John Legend, and the reality of motherhood. She’s talked about stretch marks, her ‘mom bod’, and postpartum depression.

This year, the mum-of-three has been especially open about how she’s feeling on two ‘controversial’ topics; and no, I don’t mean her outspoken dislike of Donald Trump. I mean formula feeding and baby loss.

Normally taboo topics in the public space, Chrissy has opened these conversations, and made it ok for all of us to have feelings in public again.

In October, Chrissy wrote about the loss of her baby, Jack, brother to Luna, four, and Miles, two. Posting photos of her heart-breaking experience in hospital, as it happened, Chrissy wrote:

“We are shocked and in the kind of deep pain you only hear about, the kind of pain we’ve never felt before. We were never able to stop the bleeding and give our baby the fluids he needed, despite bags and bags of blood transfusions. It just wasn’t enough.

“To our Jack - I’m so sorry that the first few moments of your life were met with so many complications, that we couldn’t give you the home you needed to survive.  We will always love you.

“On this darkest of days, we will grieve, we will cry our eyes out. But we will hug and love each other harder and get through it.”

The response was swift, immense, and overwhelmingly supportive. Chrissy was applauded by many for her bravery in sharing her story, which made women who’d had the same experience but felt they needed to keep it a secret, believing it was a personal shame – seen.

And if they felt seen, they could speak up about what happened to them, and openly get the help they needed.

As Meghan Markle said in her November essay in The New York Times about her July miscarriage, “When one person speaks the truth, it gives license for all of us to do the same…In being invited to share our pain, together we take the first steps toward healing.”

For those who think Chrissy was (and is) ‘oversharing’, there’s two things to consider.

First, oversharing is a lot harder than it looks. It takes bravery and thoughtfulness to acknowledge that your pain, if shared, can be related to by other people, and help them. And then to do it, knowing some backlash will come.

Secondly, with such honesty, the public narrative is being changed. Chrissy’s hospital photos are confronting, but the comments section, and the countless op-eds in response, show her sharing has helped so many women feel seen and opened conversations that needed to be had.

Chrissy knows that only someone who’s experienced a deep trauma can appreciate the power of learning, “I’m not alone”. And that’s who she’s aiming her words and actions at.

The same goes for Chrissy’s comments this week on formula feeding, a very divisive topic.

Calling for people to normalise formula feeding, Chrissy tweeted, “I felt way more shame having to use formula because of lack of milk from depression and whatnot”.

Explaining that there’s too much pressure to breastfeed (which she recognised is good for the baby and mum) Chrissy explained that it makes a new mum feel inadequate if she can’t.

“The stress of it, combined with the guilt that you cannot do nature's most natural thing for your own baby, is too much.”

the stress of it, combined with the guilt that you cannot do nature's most natural thing for your own baby is too much. I dunno why this is my crusade now. I just remember the sadness I felt and want you to know you are doing it right if your baby is fed, mama.

Chrissy finished her Twitter thread by saying, “I just remember the sadness I felt and want you to know you are doing it right if your baby is fed, mama.”

Both men and women supported Chrissy’s stance of ‘fed is best’. And both mums and dads shared their own stories of the weight of the expectation by society and many healthcare workers to breastfeed in preference to formula, despite how difficult or unrealistic the situation was.

Commenters revealed that the pressure often led to feelings of failure, and postpartum depression – admissions Chrissy had made easier with her post.

No matter the topic, how taboo or controversial - the message from Chrissy is always clear:

Do the best you can, and if you can’t, that’s still good enough. We’ve all gone through a lot of similar things, so you’re not alone. If you don’t feel you can speak up, I’ll do it for you.