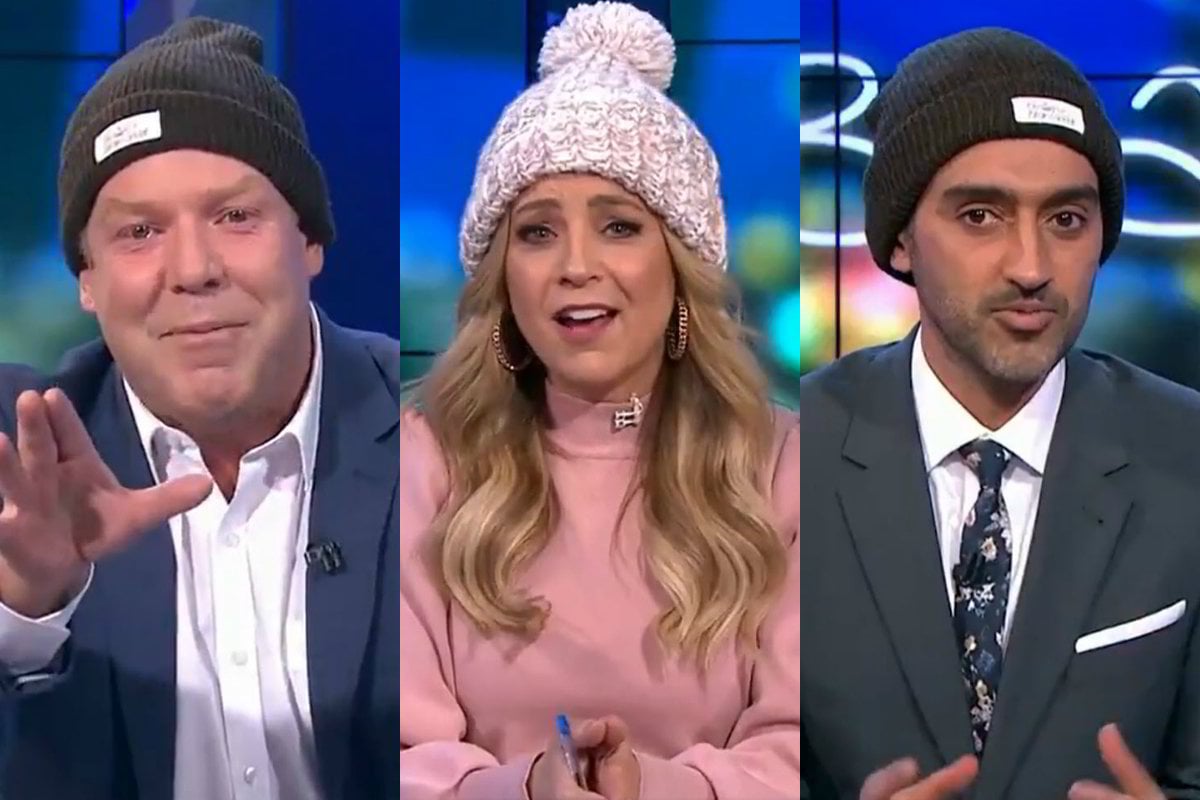 No one made it through last night's episode of The Project without a tear or two, with an important and emotional special spearheaded by host Carrie Bickmore.

The show covered personal stories, interviews, beanies and uh, Tommy Little being hit by hockey pucks, as well as a reunion between Carrie and neurosurgeon Professor Andrew Kaye, the doctor who treated her late husband Greg Lange's brain cancer for more than a decade.

"Ten years ago, one of the brains operated on by the Professor was my late husband, Greg. But back then, we used to call him Prof," she said before reading out a letter Lange had written about the Prof.

﻿"We enjoyed some verbal sparring over how much of a dud club [the Hawks] were. The Prof said, 'all right, you’ve got a brain tumour and we need to get it out or you'll die'. I sat stunned for a minute, the transition from Hawthorn to an operation to avoid death seemed a little quick. Surely some thinking music or polite conversation was needed.

"But that was the Prof. Blunt and to the point. I don't know if it was the plastic brain on the table, the well-lit and tidy room or the banter on AFL but I knew right then and there this was the guy for me."

Carrie, taking a moment to compose herself, asked the Prof if he remembered meeting Greg.

"I remember him vividly," he responded.

"﻿I remember his extraordinary courage. I never cease to be amazed by the courage of the people that I treat. People say, 'doctors have to have courage, they have got to be bold'. It is not the doctors who have got the courage, it's the patients."

The people who lose their lives to brain cancer are more than just statistics. They're people. Brothers, sisters, mothers, fathers, sons, daughters and friends. Here are just some of their faces. It really puts some things in perspective. Help: https://t.co/J1ARle1NVL pic.twitter.com/xQS53QoZij

Professor Kaye said not a day goes by when he doesn't think of patients he lost.

Carrie thanked him for "everything you did for Greg, for me and for my family".

"We're sad you've retired but thank you for the gift you've given so many people over the years and I know you are an incredibly humble man and would hate the praise but you certainly deserve it. We'll forever be grateful and so glad you were the one to walk with us side-by-side on that journey, so thank you."

"That's very kind," he replied. "Carrie, I really, deeply appreciate your words. You need to understand that, I'm not a person who shows emotion easily."

At the end of the segment, Carrie turned to her fellow panellists.

"For Greg, Prof was his everything. He was his man to help him. There's a lot on them, there's a lot of expectation.

"Greg was incredibly brave and I think he couldn't have done it without Prof by his side."

Greg died from brain cancer in December 2010, after first being diagnosed in 2001.

At the beginning of the episode, Carrie said the survival rates of brain cancer had not improved in 30 years; 80 per cent of patients diagnosed will die within five years.

Thank you SO much to everyone who has bought a @carriesB4BC and donated. Together we've raised over $3.5 million tonight! Grab a beanie here: https://t.co/4P2bG8IwwH pic.twitter.com/0VoSKbSapj

The episode raised more than $3.5 million for Bickmore's foundation Beanies for Brain Cancer.

As the total was announced at the end of the episode, Carrie burst into tears.

Beanies and caps are available through selected Cotton On stores and have already sold out on Carrie’s Beanies 4 Brain Cancer.

Reply
Upvote
Does the money raised go to actual research into cause and prevention or continue to fund doctors’ treatments?
G
guest2 2 years ago