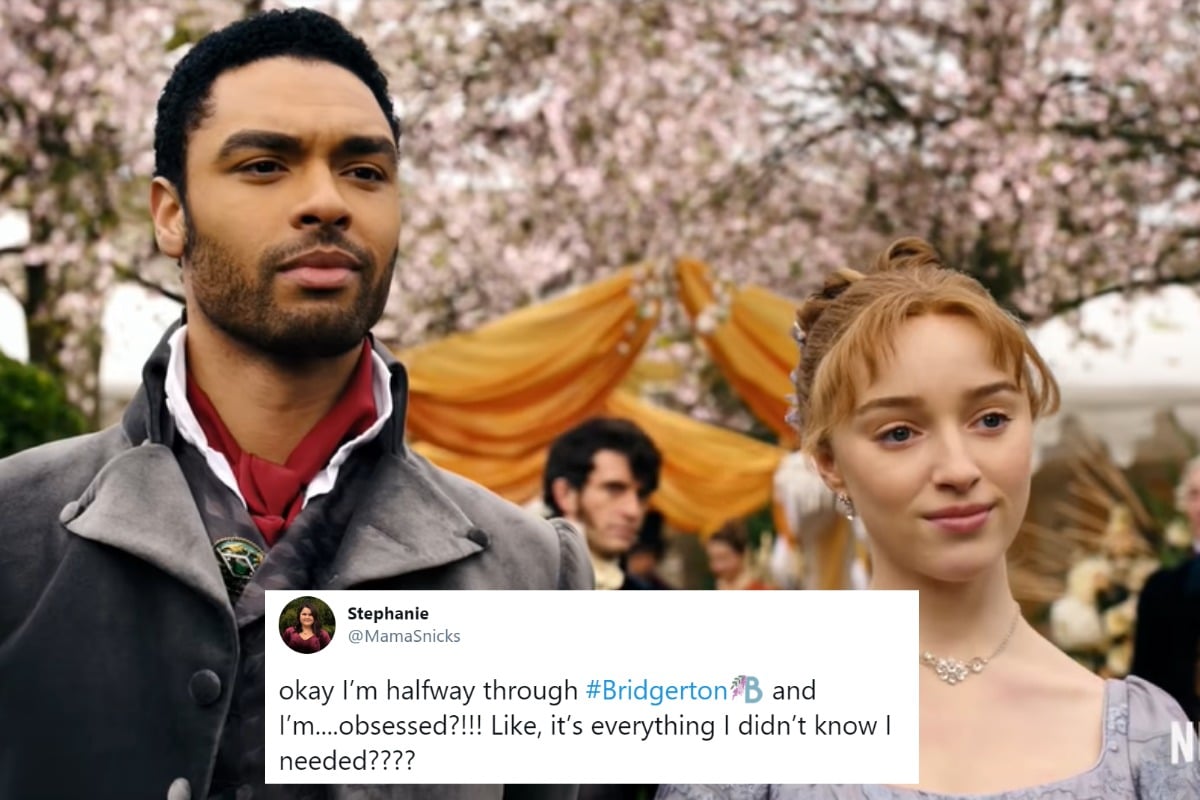 Christmas is done and dusted for another year, which means most of us are lounging around eating leftover Christmas chocolate like it's a food group and binge-watching Netflix's new series Bridgerton.

For those who haven't seen it yet, the addictive new series is based on Julia Quinn's novel of the same name and follows the Bridgerton family, led by matriarch Lady Violet Bridgerton (Ruth Gemmell), whose eldest daughter Daphne (Phoebe Dynevor) is ready to enter London's competitive "marriage market". The eight-episode first season is full of scandals, gossip and an incredibly good-looking Duke.

Read more: Everything you need to know about the cast of Bridgerton. Including where to find them on Instagram.

Not only is the show created by Scandal producer Chris Van Dusen and produced by Grey's Anatomy's Shonda Rhimes, but it's also narrated by Dame Julie Andrews. So if that isn't enough to convince you to watch it, we don't know what is.

Watch the trailer for Netflix's Bridgerton. Post continues below.

The series only just dropped on Netflix on Christmas Day. But you best believe Twitter already has some feelings about it (and the Duke of Hastings, more specifically.)

So without further ado, here are all the best reactions to Bridgerton.

It’s like If Pride & Prejudice and Gossip Girl had a baby. And I’m here for it. #Bridgerton pic.twitter.com/98Pg21X8Af

Just finished the first episode of #Bridgerton and already shipping Daphne and Simone like a crazy pic.twitter.com/3qSR1cUNni

Me: what an interesting plot in #Bridgerton

okay I’m halfway through #Bridgerton and I’m....obsessed?!!! Like, it’s everything I didn’t know I needed????

Me when I’m watching the first ten minutes of #Bridgerton episode 6 and my dad comes in and says what are you watching pic.twitter.com/Jtvu2FSnVl

Note to self:
Don't watch #Bridgerton with your parents... Especially with subtitles. 🤦🏻‍♀️

everyone at home proud of daphne #Bridgerton pic.twitter.com/spCGMGXWPR

daphne: i do not understand. you would rather die than to marry me?
me: #bridgerton pic.twitter.com/pbZ3Y7c3A9

Just finished #Bridgerton! Petition to cast Regé-Jean Page in EVERYTHING. I will never get tired looking at that man. Sir, I am looking respectfully. pic.twitter.com/BOVUw4lB8M

Me trying to convince all my friends to watch #Bridgerton pic.twitter.com/IjQKIh3s1J

I swear #Bridgerton has more sex scenes than 50 Shades, I ain’t complaining tho

Anthony: whatever YOU decide Daph I will support 👏🏾👏🏾👏🏾
I love his journey#Bridgerton pic.twitter.com/j5nmdl63XB

I never thought I would ever hear Julie Andrews say "bitches"...and I'm all for it #Bridgerton pic.twitter.com/PsoKTMQia3

Julie Andrews as Lady Whistledown is filling the Princess Diaries shaped hole in my heart. #Bridgerton

How could you not love her?! #Bridgerton pic.twitter.com/G8jEcSCh2q

Eloise is my favorite #Bridgerton. I love and Stan a feminist Queen.❤️ pic.twitter.com/3Lf4jKbHG3

Just finished #Bridgerton ... time to do my research on the cast. pic.twitter.com/QR0bASECJx

Will the #Bridgerton team put me out of my misery and announce season 2 already. 😩 pic.twitter.com/ihpirkbmUv

Have you watched Bridgerton? Let us know your thoughts in the comments below.