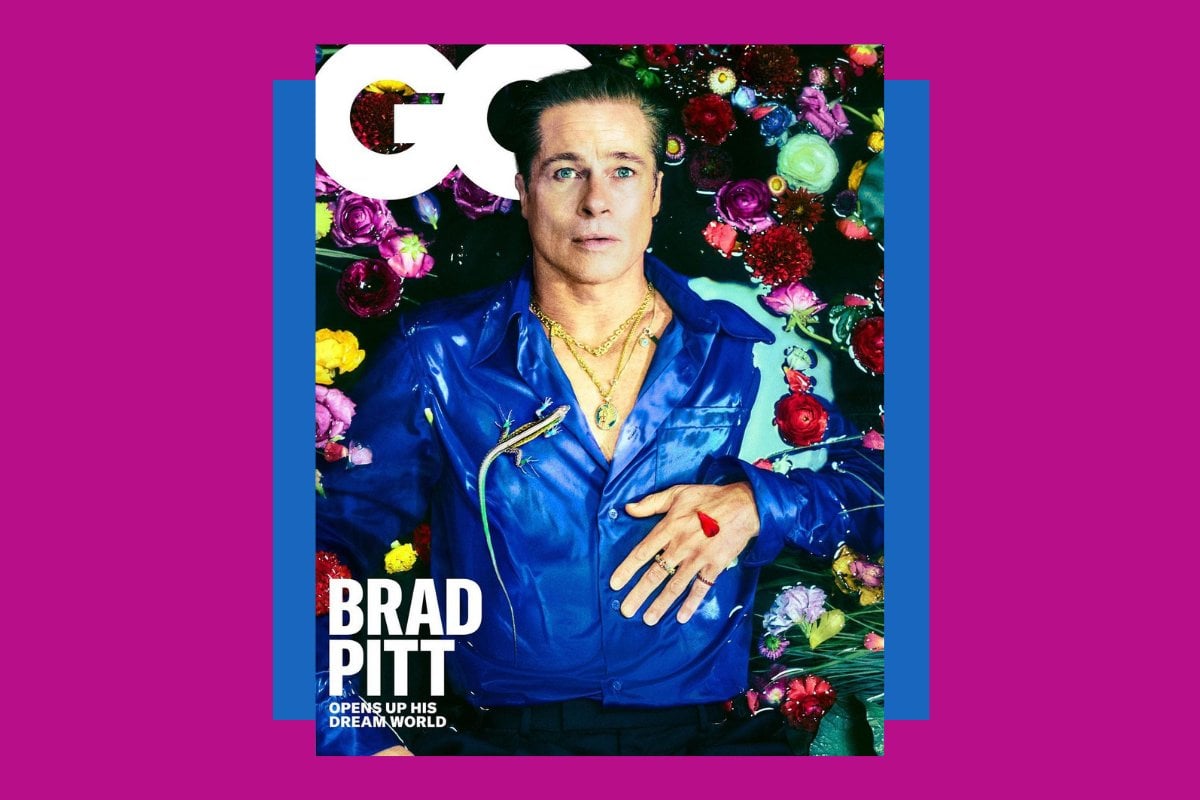 There's a lot we know about Brad Pitt.

He's a leading man, a Hollywood heartthrob. But there's also a lot we don't know about Brad Pitt, the person.

This week, GQ published a new profile on the 58-year-old for their August cover story - it's a wide-ranging and candid conversation between the actor and writer Ottessa Moshfegh, where they discuss everything from what he does first thing in the morning to how he's really doing post-divorce.

Here are eight things we learned from the profile.

The author of the profile, Ottessa Moshfegh, opens the June 2022 piece with "Brad Pitt tries to remember his dreams".

Yep, Moshfegh writes how the 58-year-old actor keeps a pen and paper next to his bed, so he can jot down whatever he can recall from them in the morning.

"I’ve found that to be really helpful," Pitt said in the interview.

"I’m curious what’s going on in there when I’m not at the helm."

Instead of baking sourdough during the pandemic (ok, he might have done that too), Brad Pitt quit smoking.

Speaking to Moshfegh, the Once Upon a Time...in Hollywood actor explained that cutting down on his daily cigarette intake wouldn't suffice, and he needed to ditch the habit altogether.

That's not the only vice he overcame.

After Angelina Jolie filed for divorce in 2016, Pitt quit drinking and spent a year and a half attending Alcoholics Anonymous.

"I had a really cool men's group here that was really private and selective, so it was safe," he said.

"Because I'd seen things of other people who had been recorded while they were spilling their guts. And that's just atrocious to me."

In more surprising news, Pitt suggested it might be time to hang up his boots and retire from acting.

The 58-year-old told Moshfegh: "I consider myself on my last leg. This last semester or trimester."

"What is this section gonna be? And how do I wanna design that?" he added.

In recent years, Pitt has spent more time behind the camera than in front of it - running and owning his own production company, Plan B Entertainment.

Recently, he has produced films including the 2020 Academy Award nominated drama Minari, and the upcoming 2022 comedy, Father of the Bride.

Plenty of A-listers own multiple homes - they might have one in LA, another in New York and something overseas (say in Lake Como, like George Clooney).

But what about Brad Pitt? Well, he's got three properties... all in the same state.

According to Moshfegh, the actor has a beach house near the coastal city Santa Barbara (which he bought shortly after marrying Jennifer Aniston), a modern house in the Hollywood Hills, Los Angeles, and a mansion (or "Craftsman home" as it's called in the article)... also in the Hollywood Hills.

"This was the first place I bought when I made some money in '94. It was really run down and dilapidated," Pitt said of his Craftsman home.

"I lived here for a few years, then I bounced around everywhere, just let friends crash here, and then somewhere in the aughts I fixed it up. Been pretty much hiding out here."

(But don't assume it's an understated house like he makes it out to be - the 1.9-acre property includes an outdoor swimming pool, private tennis court and skate park.)

Ever wondered what celebrities do in their downtime? Us too.

Well, Brad Pitt enjoys playing guitar (a hobby he took up during the pandemic) and driving up the coast.

"I drive out and I just feel like I’m taking off a cloak or something," he told Moshfegh.

"[But] as soon as you turn in past Santa Barbara, I feel it coming," he said about the weight of Hollywood.

"The shoulders start getting a little higher, and I feel it. I’m not quite sure what that is and how to contend with it just yet. Other than getting out and travelling a lot."

7. He thinks he may suffer from prosopagnosia.

Brad Pitt worries people have the wrong impression of him in social settings - that he's 'aloof, inaccessible, self absorbed' - because he struggles to remember new people.

But according to the actor, he wants to remember them and he's ashamed that he can't.

Pitt thinks it's because he suffers from an undiagnosed condition: prosopagnosia, an inability to recognise people’s faces.

“Nobody believes me!” he told Moshfegh.

Towards the end of the interview, Pitt got candid with Moshfegh - discussing his approach to life, his feelings and what he wants to do differently going forward.

"I always felt very alone in my life, alone growing up as a kid, alone even out here, and it’s really not till recently that I have had a greater embrace of my friends and family," the actor said.

"I was always moving with the currents, drifting in a way, and onto the next," he said before explaining why he thinks that is.

"I think I spent years with a low-grade depression, and it’s not until coming to terms with that, trying to embrace all sides of self – the beauty and the ugly – that I’ve been able to catch those moments of joy."

You can read the full GQ profile here.