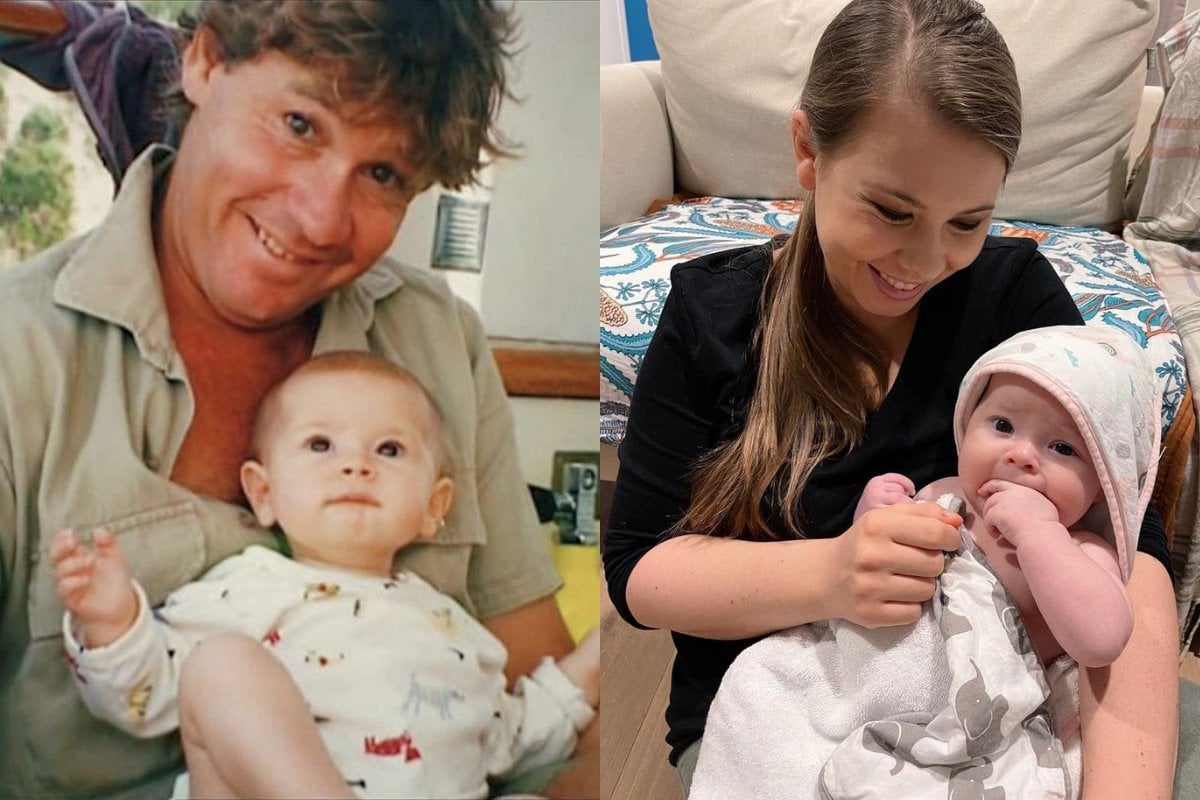 Irwin was just eight when her father, the iconic TV presenter and wildlife conservationist, was struck through the heart by a stingray barb filming a TV show in 2006.

Australians grieved with the Irwins and watched as Bindi spoke at her father’s funeral, her then-two year-old brother Bob on his mother Terri Irwin’s lap.

Terri Irwin spoke of the moment she learnt of Steve’s death with Anh Doh below. Post continues after video.

Now at 22-years-old, Bindi is married to American wakeboarder, Chandler Powell and the pair share a daughter; Grace Warrior, together.

"Grace Warrior Irwin Powell. Our graceful warrior is the most beautiful light," Bindi wrote back in March when announcing the birth of her daughter.

"Grace is named after my great-grandmother, and relatives in Chandler’s family dating back to the 1700s. Her middle names, Warrior Irwin, are a tribute to my dad and his legacy as the most incredible Wildlife Warrior.

"Her last name is Powell, and she already has such a kind soul just like her dad."

Irwin and Powell met in 2013 when Chandler visited Australia Zoo with his family and had Bindi as their tour guide.

Later, Powell reached out to Bindi's mum, Terri to ask her permission to keep in contact and the pair exchanged letters for two years before catching up again.

In 2018, Powell moved to Australia to be with Bindi and a year later he proposed.

"Chandler, close to 6 years ago I fell in love with you and every day since has been a whirlwind of adventure and true happiness." Bindi wrote at the time.

"I’m so looking forwarding to spending our forever together as your wife. Here’s to a lifetime of friendship, purpose and unconditional love. Now let’s get married already!"

The pair wed in an intimate ceremony during the height of COVID-19, and welcomed their daughter on their first wedding anniversary, March 25, 2021.

Just this week, Bindi shared a snap with her daughter, alongside one with her mother at the same age.

"We both love our hoodie towels."

Speaking to ET earlier this year, Bindi reflected on her father, and how she and Chandler plan on introducing their daughter to him.

"He would've been a good, good grandpa," Bindi said.

"Yeah, he really would've been. I don't think we would've ever seen our daughter. He would've just whisked her away into the zoo and it would've been perfect.

"But it is so nice that we'll be able to introduce her to her grandfather through all of those documentaries. It's really special."

In an interview with Stellar magazine, Bindi spoke about the moments in which she misses her dad the most.

“Some days you feel the grief more than others,” the actress, media personality and conservationists told the publication.

“What gets to me are those moments when I’d love him to be here to share what we’re doing. It could be when my brother is receiving an accolade for his photography, or it might be at the end of the day when we’re having dinner and laughing. I’ll think: ‘I wish Dad was here for this.’ But he’s just not there.”

Bindi said that although she takes comfort in following in her dad’s footsteps working with animals, and can feel “his spirit in everything we do”, some days, her grief can hit out of the blue.

She recalls feeling this way a few weeks ago while performing Steve Irwin’s memorable crocodile show at Australia Zoo, when footage of her dad she’s seen “maybe 50 times” caused her to cry.

Losing her dad young forced Bindi to grow up quickly and she has achieved so much in her short 22 years so far.

Her career highlights include winning an the Emmy Award for “Outstanding Performer in a Children’s Series” for Bindi: The Jungle Girl in 2008, featuring on-screen in Free Willy: Escape from Pirate’s Cove and Crikey! It’s the Irwins, winning the US version of Dancing with the Stars in 2015, and continuing her work with Australia Zoo and Wildlife Warriors, the conservation charity set up by her parents.

Bindi said what she misses most about her dad is his fatherly advice.

“Sometimes I wish I could ask him a question: ‘How would you do this?’ or ‘What do you think about this?’”

“He was an incredible sounding board and incredibly wise. I miss that.”