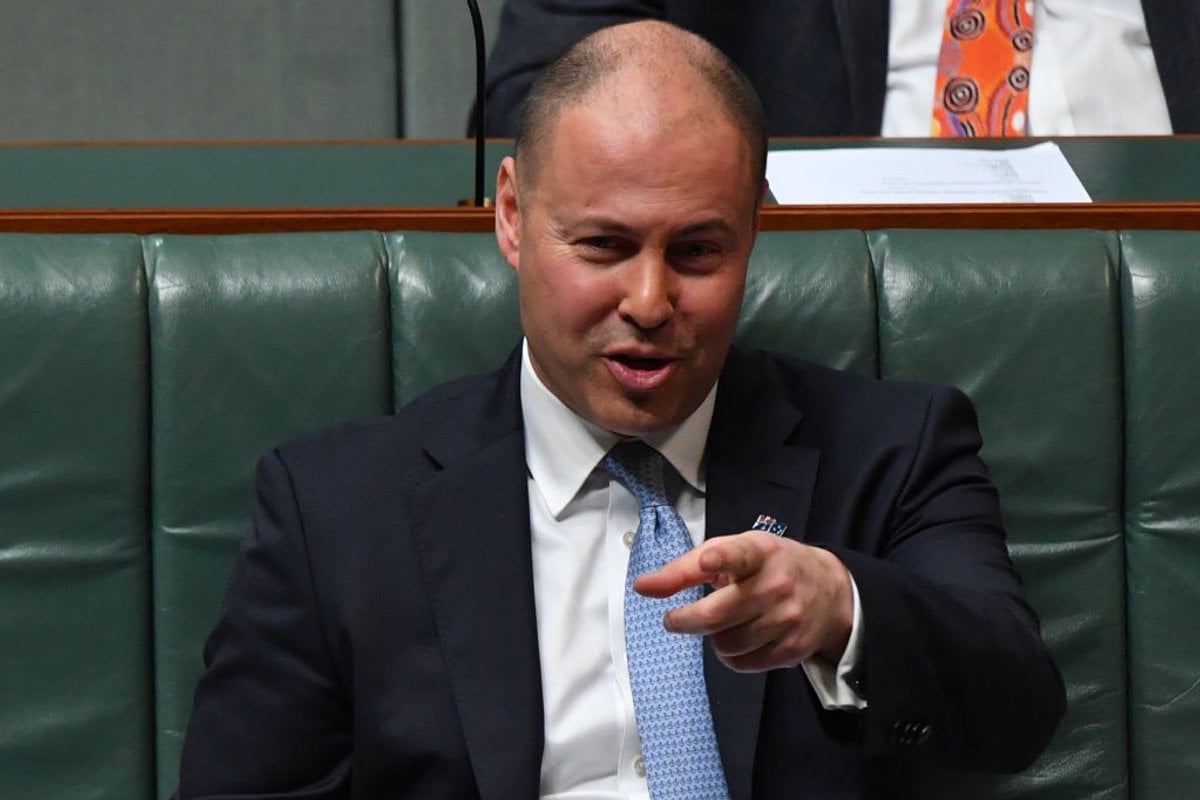 I was really hopeful that in the midst of a global pandemic, during a recession, that maybe, just maybe, our so called ‘leaders’ would be pragmatic in their approach to a recovering economy and not forget about half the population. The female half.

Am I asking too much?

To be honest, I was pumped for the budget last night. I am an accountant and a small business owner so maybe I have a slightly elevated level of enthusiasm.

Watch: Treasurer Josh Frydenberg on women in the workforce. Post continues below.

It had been touted as the most significant federal budget in decades. There had been so much hype on delivering on women’s workplace participation, I thought this was the year they were going to deliver.

The hubby put the kids to bed, I had my block of chocolate in hand, I was ready.

Disappointment is an understatement. Disbelief and betrayal are what I felt.

Josh Frydenberg acknowledged that women have been the hardest hit in the recession and his response, Women’s Economic Security, got a total of $240 million dollars.

To do a quick comparison, the Coffs Harbour Bypass is worth $490 million dollars.

Women of Australia, in the Treasurer’s eyes, are worth half a road!

That $240 million is to cover everything, including safety at work and at home, new cadetships in STEM and job creation and entrepreneurship.

There is a neat eighty-page document to go along with it, but there is nothing substantial to help women to work more, to reduce the gender pay or superannuation gap or help women with social housing.

All huge problems women are facing more so than ever because of the global pandemic.

There were obvious areas of economic and social reform that would significantly help Australia’s economic recovery that were completely missing on Tuesday night.

Only one of the hottest social and economic topics of 2020.

The free childcare and then the ‘snap back’ in June 2020 highlighted, again, that our childcare system is broken.

Early education is education and not child-minding and access should not be dependent on the work-status of parents.

The social and economic benefits of a more heavily subsidised childcare system have been proven. I am bewildered. How could this not even be a talking point?

The COVID-19 early release scheme has seen $33 billion of payments come out of the super system. Women have withdrawn less than men but have taken a higher portion of their balance.

If superannuation were to be paid on the government's paid parental leave scheme it would result in approximately $1,300 extra per participant, less than one fortnight's worth of the original JobKeeper payment.

Then there was the acknowledgement of how long we would be paying this budget off for. Given the number of soon-to-be female pensioners this budget will create, it might have been worth considering how they're supposed to... pay for it.

Women aged 55 and older are the fastest growing group experiencing homelessness in Australia, which is partly due to their low superannuation savings and the barriers they face in the workforce.

Investment in affordable and safe public housing benefits older women while unlocking barriers for younger women and children to leave unhealthy relationships - a number which has grown throughout the pandemic.

An adequate standard of living, including safe and secure housing is a fundamental human right. The budget has $688 million for the home-builders scheme but nothing for access to affordable housing.

The flavour of the budget was tax-deductions. If you are a large business or a sole trader, this budget offers a ‘fire sale’ of tax deductions.

I'm actually onboard with this, but have a final suggestion:

This removes the three days a week disincentive for the second parent to work (or the rebate cliff) while encouraging parents to work, building the economy.

It would also encourage women to become entrepreneurs, one of the budget’s focuses for women.

The best part about this is the current rebate is already means tested so people of lower income would still be receiving the higher rebate.

The Treasurer has completely ignored women in the budget, despite his acknowledgment that they have been hit the hardest.

Given his new-found love of tax deductions, I am suggesting offering an economic limb. One to improve the affordability of work for women, so we can start working off that enormous debt the government have created for our children, despite offering them and their mothers no helpful economic or social reform.

Nicole Richardson works as a Chartered Accountant and is a Co-founder of SitClique, a small business founded with her two sisters when they all had difficulty accessing flexible, in-home care while juggling being working professionals and parents.

Reply
Upvote
2 upvotes
I don't know....I'm a 40year old working mum, I run a business. Husband and I most are what I would call "middle income" earners. We like, most have paid the astronomically high child care bills and are super glad our kids are now in school. However I think families need  to plan for these costs, we can't expect the government to pay for everything. I think the tax cuts will help.
I do think pensioners should get a meaningful increase and I do think there is too much focus constantly on construction jobs, I do understand the importance of infrastructure,   but it would be good to see diversity in job creation. However, it doesn't matter what any government does in a budget, you will never please everyone.
S
snorks 2 years ago