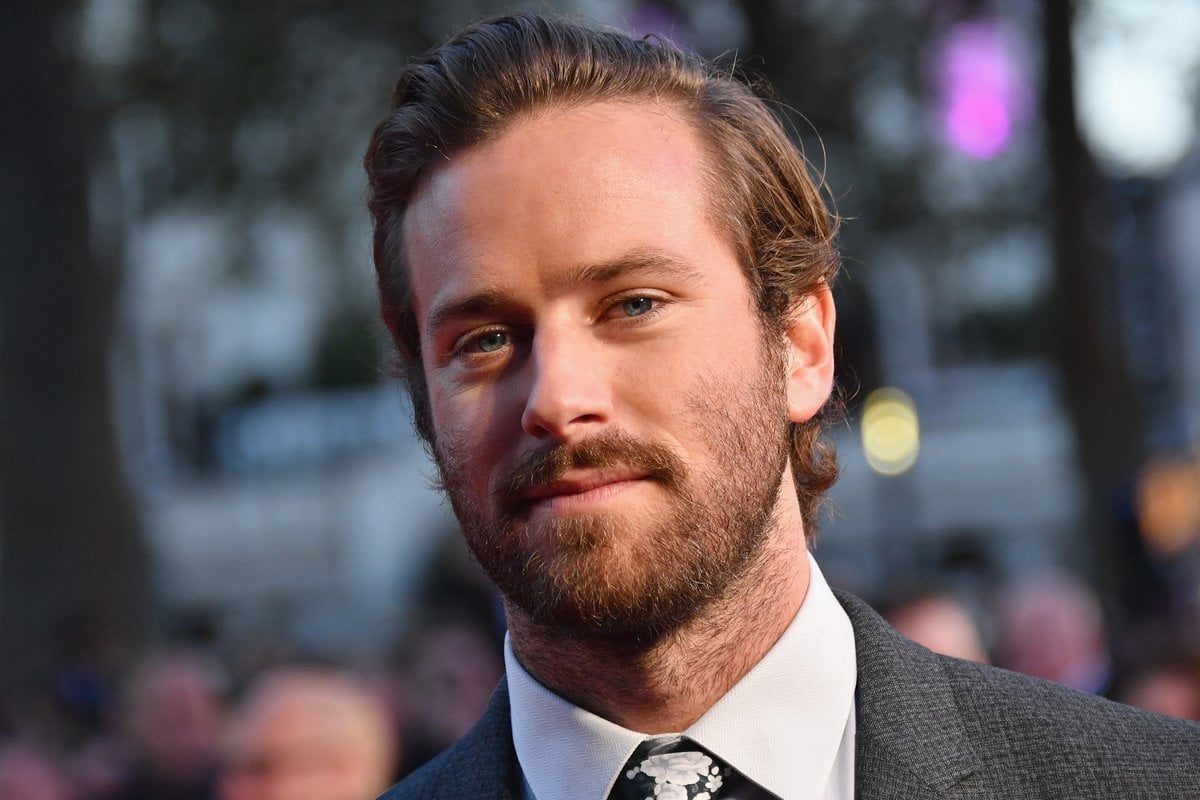 You've likely seen Armie Hammer's name trending all over the internet recently, after leaked direct messages on Instagram suggest an interest in 'cannibalism'.

The allegations against the Call Me By Your Name actor, which range from lewd sexual messages to physical threats and emotional abuse, have made headlines worldwide. While denying there is any truth to the story, Hammer has stepped down from his role in the upcoming film 'Shotgun Wedding' alongside Jennifer Lopez.

Watch the trailer for 'Call Me By Your Name' here. Post continues below.

Here's what you need to know about the life of Armie Hammer, from being "disowned" by his parents to his breakout role in Gossip Girl.

Armie Hammer is the son of businessman Michael Armand Hammer and former bank loan officer Dru Ann. His great-grandfather, Dr. Armand Hammer, was an oil tycoon who was at the helm of Occidental Petroleum. In 1986, four years before his death, Forbes estimated Dr. Hammer's net worth to be $200 million.

Born into a very wealthy family, he has previously spoken about why his decision to drop out of high school and pursue acting as a teenager disappointed his family.

"I decided to do this and decided to get into it, I had to give up one of those things that you mentioned, which was being rich," he told Chicago-Sun Times in 2012. 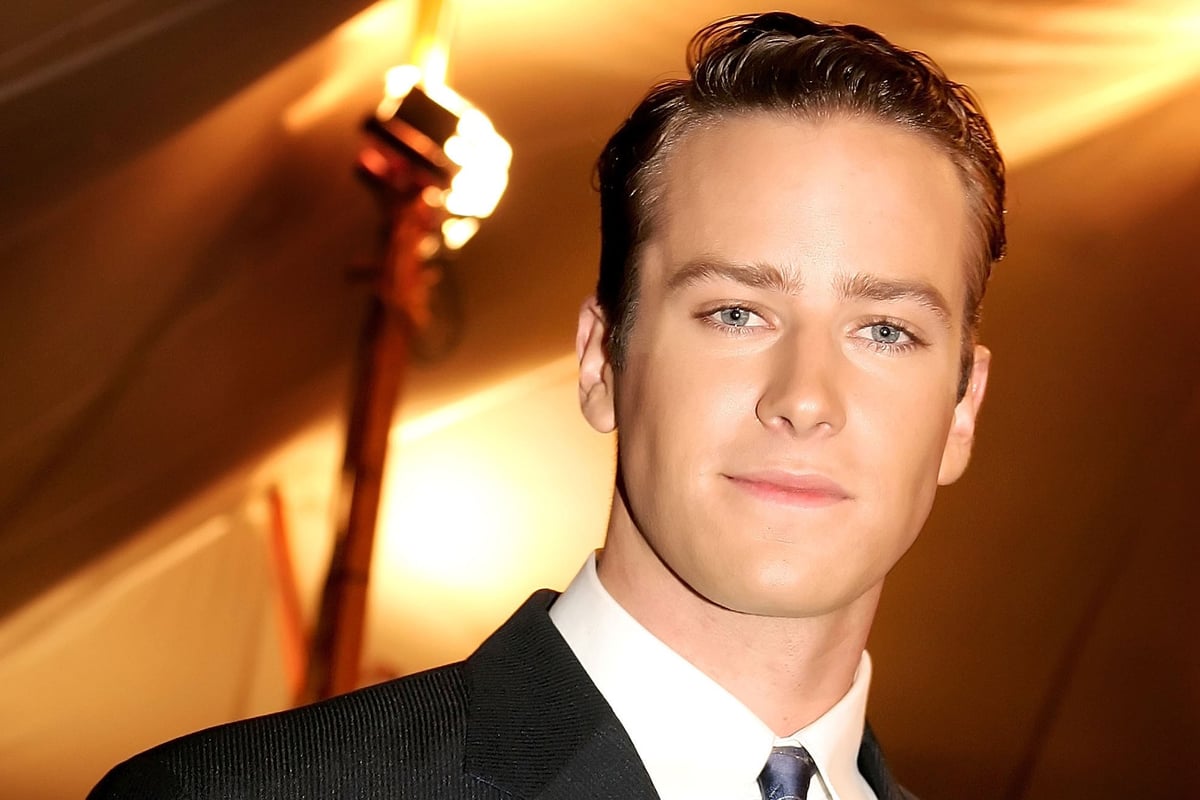 Armie Hammer in 2008, in the early days of his career as an actor. Image: Getty.

The actor said his parents "for all intents and purposes...disowned him" because of his career choice.

"It was a very difficult decision for my parents to accept, for me to drop out of high school to start acting," Hammer shared.

"They thought, 'You're dropping out of high school? No Hammer man has even dropped out of college without getting an MBA or a PhD', or this and that. They wanted me to go to Columbia. That was the goal.

Armie Hammer began in guest spots on television series, including Veronica Mars in 2006, Desperate Housewives in 2007 and Gossip Girl in 2009, when he played the character of Gabriel Edwards for four episodes. 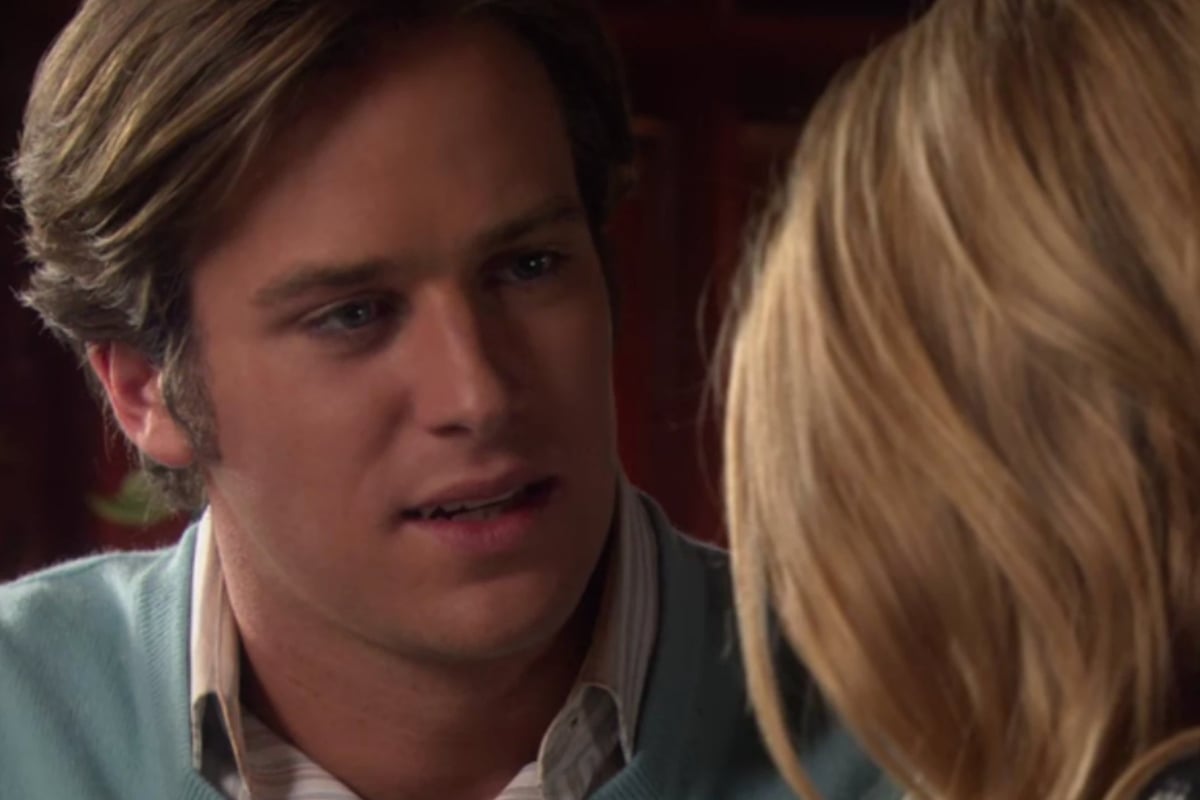 Armie Hammer had a guest role on Gossip Girl in 2009. Image: Gossip Girl.

In 2010, his breakout film role came with The Social Network, starring as the Cameron and Tyler Winklevoss.

His next major film, and most notable to date, was Call Me By Your Name, where he starred alongside Timothée Chalamet and Michael Stuhlbarg. Hammer's character, Oliver, was a 24-year-old college student who had a passionate affair with a teenage boy, Elio, played by Timothée Chalamet. The film grossed $41.9 million worldwide, and Hammer's performance earned him a Golden Globe nomination for Best Supporting Actor.

He was due to star alongside Jennifer Lopez in the upcoming film Shotgun Wedding, which is about a couple who "gather their lovable but very opinionated families for the ultimate destination wedding just as the couple begins to get cold feet."

However, following his most recent abuse allegations, the actor has pulled out of the movie.

In 2010, Hammer married Elizabeth Chambers, a journalist and television personality. The couple share two kids, daughter Harper Grace, six, and son Ford Douglas, three. Earlier this month, he shared that his New Year resolution was to stop "posting pictures of my children for their safety and for their well-being".

In 2013, Hammer spoke about his sex life with his wife, telling Playboy: "I liked the grabbing of the neck and the hair and all that. But then you get married and your sexual appetites change... And I mean that for the better — it’s not like I’m suffering in any way. But you can’t really pull your wife’s hair. It gets to a point where you say, 'I respect you too much to do these things that I kind of want to do.'"

After 10 years of marriage, Hammer and Chambers announced their separation in July 2020 in a joint Instagram post.

"Thirteen years as best friends, soulmates, partners and then parents," the statement read. "It has been an incredible journey, but together, we’ve decided to turn the page and move on from our marriage. As we enter into this next chapter, our children and relationship as co-parents and dear friends will remain our priority."

Hammer has also had one run-in with the law. In November 2011 he was arrested in Texas for marijuana possession and reportedly spent one day in jail, before paying a fine of $1,000 and being let go, according to People.

In 2018, he posted his mugshot with the caption: "It might not be Thursday, but this throwback seems worth it," and a #godblesstexas hashtag.

In the messages, which reportedly date back to 2016 when he was still married, Hammer spoke about drinking blood and described various graphic sex acts, which included sexual references to cannibalism.

"You just live to obey me and be my slave. I will own you. If I wanted to cut off one of your toes and keep it with me in my pocket so I always had a piece of you in my possession?" another message read.

The Instagram user claimed that at least five other women had had consensual affairs with Hammer.

"We collectively decided we have to speak out after how we were treated and seeing how the women in 2020 were being treated by him. We cannot allow more women to endure what we are going through in the future," she wrote. 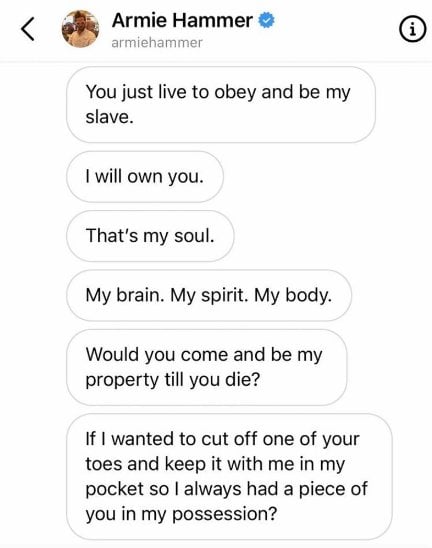 One of the alleged Instagram messages. Image: Instagram/House of Effie.

Since the messages were leaked, fans have noticed that Hammer follows a number of fetish and kink-related profiles on Instagram.

In a statement to Variety, Hammer said: "I’m not responding to these bullsh*t claims but in light of the vicious and spurious online attacks against me, I cannot in good conscience now leave my children for four months to shoot a film in the Dominican Republic. Lionsgate is supporting me in this and I’m grateful to them for that."

Writer Jessica Ciencin Henriquez, who reportedly briefly dated Armie Hammer last year, addressed the actor's alleged Instagram messages on Twitter, which she has since made private.

"If you are still questioning whether or not those Armie Hammer DMs are real (and they are) maybe you should start questioning why we live in a culture willing to give abusers the benefit of the doubt instead of victims," she wrote.

"Because some of you made it to adulthood without knowing what this is. Abuse: cruel and violent treatment of a person or animal."

The future of the actor evidently remains unknown, but it certainly looks like the attention could debunk the theory that 'all good publicity is good publicity'.