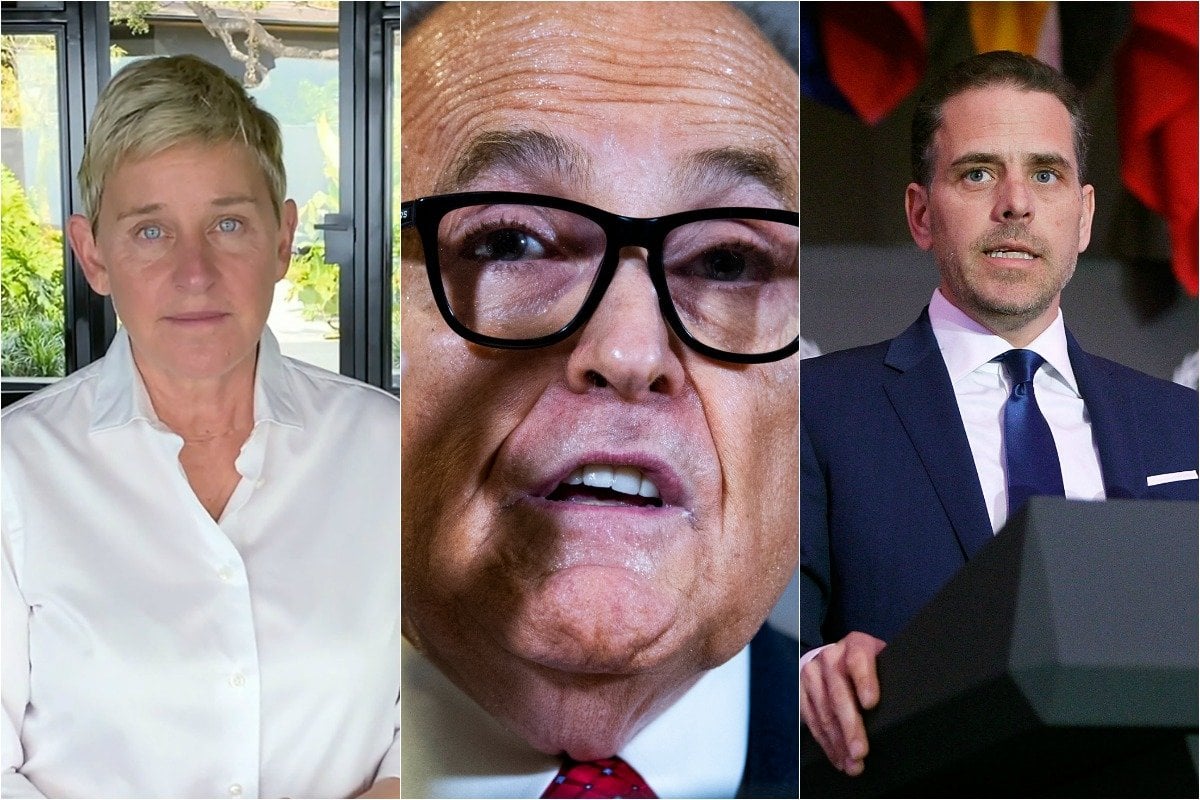 Production on Ellen DeGeneres' talk show has halted until January after the TV host tested positive for coronavirus.

"Hi everyone. I want to let you all know that I tested positive for COVID-19," DeGeneres announced on Twitter.

"Fortunately, I'm feeling fine right now. Anyone who has been in close contact with me has been notified, and I am following all the proper CDC guidelines.

"I'll see you all again after the holidays. Please stay healthy and safe."

The 62-year-old is the latest celebrity to test positive, with others including Tom Hanks, Idris Elba, Hugh Grant, Kanye West, and Gloria Estefan.

The Ellen Show is filming in the Los Angeles area which this week reimposed restrictions on household gatherings and shut down indoor and outdoor dining amid a surge of the virus.

DeGeneres only returned to TV in September after months off air, during which time she faced allegations of bullying and toxic workplace behaviour.

The federal government has canned a deal to buy tens of millions of doses of a potential coronavirus vaccine being developed in Australia.

The University of Queensland and biotechnology company CSL have abandoned trials of their COVID-19 vaccine candidate after some participants returned false positive results for HIV.

Health Minister Greg Hunt said on Friday this was caused by a protein used, and the decision to cancel the trial was down to the risk to vaccine confidence.

Prime Minister Scott Morrison said this outcome showed why the government had "spread our risk" across four different vaccine projects.

"The advice that we have received and the National security committee of Cabinet met this week and made the decision that the University of Queensland vaccine will not be able to proceed, based on the scientific advice, and that will no longer feature as part of Australia's vaccine plan."

He thanked the scientists at UQ and praised their work on molecular clamp research on vaccines.

Morrison said the government will now increase production and purchase of the AstraZeneca vaccine, made here in Australia, from 38.3 million to 53.8 million and increase the Nova vaccine by 11 million doses.

Hunt said the increased supply of vaccines made in Australia meant "there is the potential for slightly earlier completion of the vaccine roll out for Australians in 2021."

Nine said the government was told on Monday that UQ and CSL had abandoned trials and cabinet on Thursday agreed to end an agreement to buy 50 million doses of the potential vaccine.

The government has previously said it wants to start rolling out a vaccine to the Australian community early in the new year.

US President Donald Trump's personal lawyer Rudy Giuliani says he has received "miraculous" coronavirus treatment that allowed him to leave hospital after only four days.

"My treatment by the nurses and staff at Georgetown Med Star Hospital was miraculous. I walked in with serious symptoms. I walked out better than ever," Giuliani tweeted.

He received an experimental antibody therapy and the drug remdesivir, Giuliani earlier said in a radio interview, the same treatment cocktail Trump received during his own bout with coronavirus in October.

“If it wasn’t me, I wouldn’t have been put in a hospital frankly,” Rudy Giuliani told WABC radio. “Sometimes when you’re a celebrity, they’re worried if something happens to you. They’re going to examine it more carefully and do everything right.” https://t.co/16XaN8XMxh

The 76-year-old former mayor of New York City, who has led the president's legal challenges to overturn the result of the November presidential election, said his "celebrity" status had resulted in better care.

US coronavirus case numbers, deaths, and hospitalisations are currently at record levels, with the number of infections eclipsing 200,000 per day with virtually every state reporting surges.

Victorians to snap up tourism vouchers.

Victorians are set to snap up the first release of $200 regional tourism vouchers offered by the state government.

High demand is expected for the 40,000 vouchers when registration opens to Victorian households at 10am on Friday.

Under the program, travellers will be reimbursed $200 if they spend at least $400 on accommodation, experiences or tours in regional areas of the state.

Victorians hoping to snap up one of the state government's $200 travel vouchers will need to act fast, with the first 40,000 expected to run out. https://t.co/MEEjr9kh7r

Tourism Minister Martin Pakula expects the scheme to be very popular, especially the first stage for travel between December 12 and January 22.

"I would expect demand to potentially outstrip supply, that's been experienced in other parts of the country," he said on Thursday ahead of the launch.

To access the vouchers, Victorians must visit business.vic.gov.au and register their details. The lucky first 40,000 applicants will be confirmed via email.

PM, premiers get to work on reform agenda.

Premiers, treasurers and local government leaders will come together in Canberra on Friday to discuss better cooperation between levels of government.

The National Federation Reform Council was announced in mid-2020 to replace the Council of Australian Governments.

Prime Minister Scott Morrison and Australia's state leaders have attended a special reception with the Governor-General at The Lodge in Canberra ahead of the final National Cabinet meeting of 2020. #9News

It will meet once a year to focus on priority national issues.

The meeting, to be opened by Prime Minister Scott Morrison, is expected to deal with job creation, commonwealth-state system reforms and mental health, as well as Indigenous issues, women's safety and veterans' wellbeing.

A key point of discussion will be the response to the recent report of the bushfires royal commission.

However, they are still required to self-quarantine for 14 days - meaning the earliest they would be able to escape is 11.59pm on Christmas Day.

The isolation requirement will only be lifted when SA goes 28 days with no new cases.

Mr McGowan will dial into Friday's national cabinet meeting to avoid coming into physical contact with the SA premier.

He says he is simply following the rules that apply to all other West Australians, requiring them to isolate if they come into contact with anyone from SA.

All other state and territory leaders and the prime minister are attending in person.

A Sydney horror film fan has been found not guilty of murdering her mother, who she then decapitated, due to her mental disorders.

Jessica Camilleri, 27, stabbed her mother Rita at least 100 times after an argument before taking her mother's head from the kitchen of their St Clair home and placing it on a footpath outside.

After two days of deliberations, a NSW Supreme Court jury on Thursday afternoon found her not guilty of murder over the July 2019 death.

She was instead found guilty of manslaughter due to a partial defence of substantial impairment by abnormality of the mind that caused a loss of control.

Two forensic psychiatrists had told the trial the woman was suffering from a substantial impairment of the mind at the time of the frenzied knife attack in July 2019.

Both diagnosed her with an intellectual disability and autism spectrum disorder that features a fixation on horror films, though only one attributed the loss of control to the mixture of those conditions.

Camilleri was remanded in custody, where she's been since the night of the attack.

She will return to court on February 17 for sentence.

"I take this matter very seriously but I am confident that a professional and objective review of these matters will demonstrate that I handled my affairs legally and appropriately, including with the benefit of professional tax advisors," Hunter Biden said in a statement on Wednesday.

He said he learned of the investigation for the first time on Tuesday when prosecutors informed his lawyer of the probe.

Hunter Biden says he is facing a federal investigation over his tax affairs https://t.co/AT7uO2Vovi

The Biden transition team on Wednesday released a statement saying, "President-elect Biden is deeply proud of his son, who has fought through difficult challenges, including the vicious personal attacks of recent months, only to emerge stronger."

CNN reported investigators have been examining multiple financial issues, including whether Hunter Biden and his associates violated tax and money laundering laws in business dealings in foreign countries, principally China, according to two people briefed on the probe.

The investigation began as early as 2018, predating the arrival of William Barr as attorney-general, sources told CNN.

US panel meets over vaccine approval.

A US government panel comprised of outside experts is meeting to decide whether to support an emergency use order for a COVID-19 vaccine produced by Pfizer and BioNTech.

The panel, which is expected to endorse the vaccine, would issue a non-binding recommendation that is one of the last steps towards vaccine approval by the US Food and Drug Administration (FDA).

If approved by the FDA, millions of Pfizer vaccine doses would be shipped throughout the country, beginning a mass inoculation program.

Thursday's meeting of the @US_FDA's vaccine advisory panel is likely the last step before a U.S. decision to begin shipping millions of doses of the shot, which has shown strong protection against the #coronavirus.https://t.co/0Ny7vEYF2S

The final hurdles of the vaccine approval process come as the US records nearly 300,000 people killed by the virus - far more than any other country - in a nearly year-long saga that has devastated the economy.

The UK government has already begun distribution of the Pfizer vaccine, which has also received the green light from Canada, Bahrain and Saudi Arabia.

- A Swiss special prosecutor wants to see a criminal investigation commenced to examine FIFA president Gianni Infantino's use of a private jet in 2017.

- McDonald's UK have launched a festive menu range in time for the holidays, but a brand-new Christmas jerk chicken burger has left some fans accusing the brand of 'disrespecting' an entire culture's cuisine.

- Hollywood star George Clooney has revealed he was taken to hospital with excruciating stomach pains after losing almost 12kg for his latest movie.

Reply
Upvote
They’ve been investigating Hunter Biden’s taxes since 2018 and they haven’t come up with a charge yet? Either he’s a criminal genius or they should call it a day and do something more important.
R
random dude a year ago