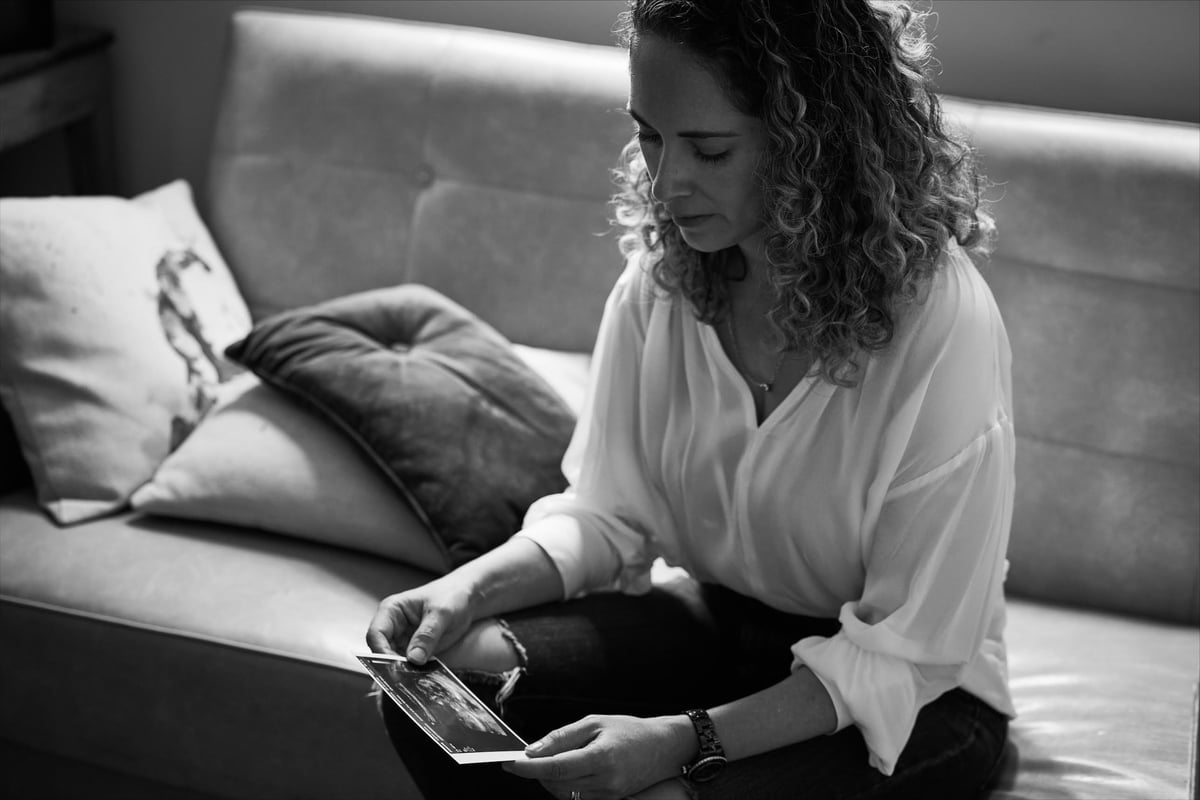 This story deals with miscarriage and stillbirth and could be triggering for some readers.

The news of Cristiano Ronaldo and Georgina Rodriguez's baby's death has raised awareness of just how devastating it can be to lose one twin, while celebrating the birth of the other.

Renata and Ben from Victoria experienced twin loss and understand the grief and complexity of emotions that accompanies this experience.

"The truth is no one talks about the consuming grief, the sadness, the mixed feelings, the anger you feel after you lose a baby," Renata says.

Watch: Mamamia's tribute to the babies we have lost. Post continues below.

Renata and Ben's journey to pregnancy and parenthood was a rollercoaster of grief, guilt, sadness and gratitude.

"When we started our parenting journey and first fell pregnant, I had a miscarriage," Renata says, explaining that it was particularly difficult as she was due at the same time as a couple of her close friends.

What began as excitement to be sharing the pregnancy with loved ones, turned out to be a painful reminder of what the couple had lost.

"I was the only one to have a miscarriage," she says. "At the same time you’re happy for them but it’s very hard to see them moving forward and you feel like you're left behind."

Renata was lucky to fall pregnant again, welcoming their baby Alex. "I had a really easy pregnancy that time. It was a beautiful birth experience."

When her little one was just over a year old, Renata and her husband discovered that not only were they expecting again – Renata was pregnant with twins. The news came as a big surprise and they were very excited to be expecting twins.

"To start with, it was a huge shock because I had a not even 18-month-old. I was going to have three kids under two."

Getting her head around the surprise was "massive", but the couple would soon receive some devastating news.

Finding out during her second trimester that she had lost one of her twins was devastating.

"That was probably the hardest thing for me to deal with because it’s grieving and being grateful at the same time," Renata says.

"It was very hard to navigate through that for my pregnancy because you feel grateful you’re having a baby but at the same time, you just lost another baby. It was the hardest time of my life for sure."

Listen: A bonus episode of No Filter on dealing with pregnancy loss. Post continues below.

After her blood pressure skyrocketed at the beginning of the third trimester (at 34 weeks), Levi was born prematurely via an emergency C-section. He was 1.7kg and remained in the hospital for three weeks.

"At the special care nursery, I was mainly surrounded by twin babies but I was there with one," Renata says. "And that was really hard. There’s not one minute that I don’t look at him and think about the other baby and what it was going to be like. But at the same time, there’s that guilt because I have a beautiful baby that a lot of people don’t get to enjoy if they had one loss. It’s grateful, guilty and grief mixed into one big feeling."

Renata recalls the grief as feeling as though it was the end of the world.

"You don’t see any light at the end of the tunnel. It feels like you’re in such a dark place and you just feel hopeless and there’s nothing you can do about it."

Grieving while in lockdown and while separated from family due to border closures meant it was an incredibly isolating experience. But she also found herself isolated from those who were around. "I had no energy to give anyone else. I was literally surviving day by day."

Renata also found that a few people didn’t understand what she was going through.

"When you have a loss, people tell you that 'everything happens for a reason, to move on and that it was just not meant to be for you.' That’s not helpful when you’re going through something so deep and so dark. You’re always questioning why did this happen to me, to us?"

Learning to support one another through their grief was also a steep "learning curve" for Renata and her husband. "It's impossible to say that it hasn’t affected us," she says.

Renata says the support of her husband has helped her to heal and also talking to a professional.

"My obstetrician referred me to a good psychologist. I saw her all through my pregnancy, getting through all those feelings."

And speaking about what she was going through with very close friends and family helped her to honour her baby. "I wanted everyone to know he was there."

A post shared by Centre Of Perinatal Excellence (@cope.org.au)

Renata says sharing her story as part of the COPE (Centre of Perinatal Excellence) Truth Campaign is also providing some closure.

"Keep talking about it. It helps so much," she says. "I’ve been seeing a psychologist, and it’s been amazing. It’s so good to talk about it. Sometimes it’s hard to talk openly with friends and family because you don’t want them to carry the burden.

"But every time you talk about it and shed some tears, it’s like a little bit getting out of your system, even though it will always be there. It relieves the pressure. If you deal with it, it’s so much easier to move forward and understand how to live with both feelings.

"In my case, the biggest challenge is how to live with both the loss, the grief and the happiness – and be grateful."

The Centre of Perinatal Excellence (COPE) is devoted to empowering hopeful, expectant and new parents with information at each stage of their journey to parenthood.

COPE’s #thetruth campaign series has been created to raise awareness of the hidden struggles faced by thousands of people on their path to parenthood – yet often not spoken about.

L
lynot57 a month ago

Reply
Upvote
The comment I’ll never forget, amongst many, was ‘At least you had two’. That was over thirty years ago. Thank you  for sharing your story, I feel your pain.
J
jules75 a month ago